How Delaware became an American haven for "grand corruption" 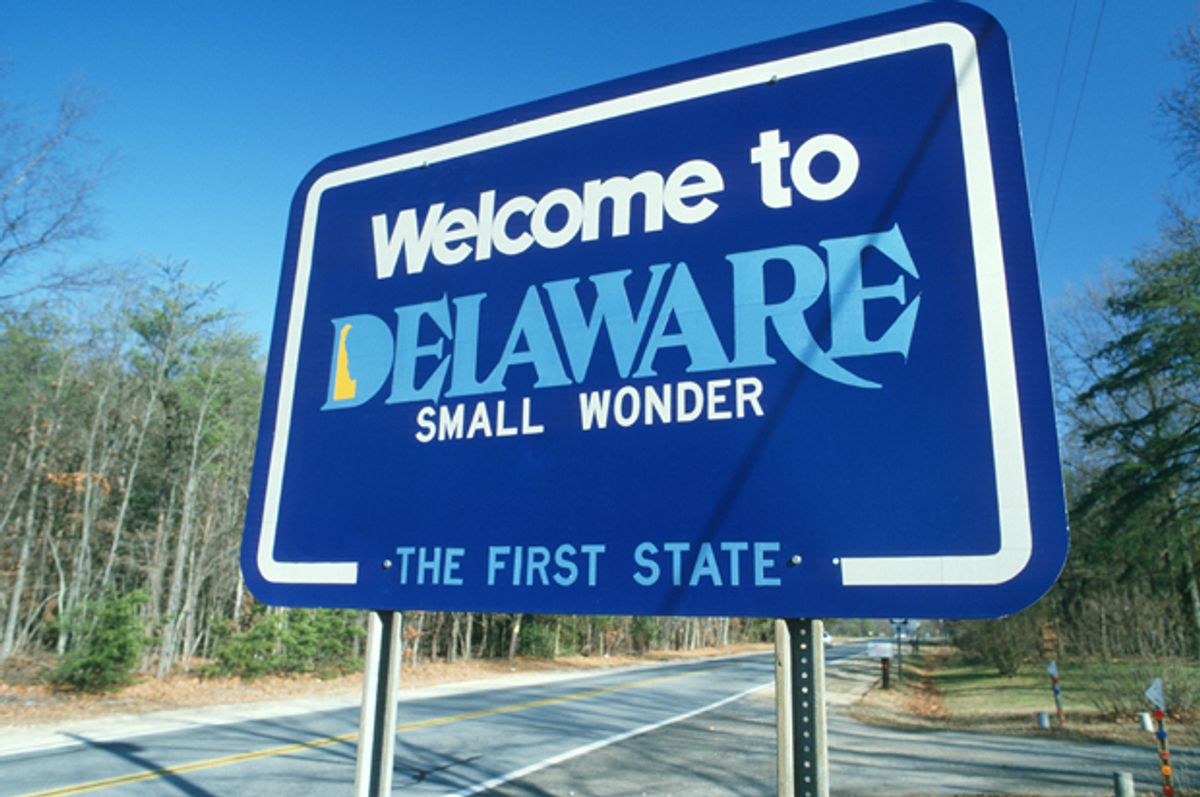 Normally, when one of our 50 states gets singled out by an international body of some consequence, you would hope it would be good news and something that the locals would brag about. But that’s not likely to be the case with Delaware’s recognition by Transparency International this month as one of the world’s best examples of “grand corruption.” The dubious distinction comes in recognition of the state's laissez faire corporate registration system, which critics say provides corporations, fraudsters and wealthy individuals secrecy and asset protection that puts it on a footing with notorious tax havens like the Cayman Islands.

Transparency International’s selection of the top nine “grand corruption” winners was based on both internal deliberations by the non-governmental organization, most famous for its global ranking of the world’s nations for corruption, and the votes of 170,000 people around the world. Other "winners" include Brazilian oil giant Petrobras, enmeshed in an octopus like $2 billion dollar scandal that has shaken the sitting government; as well as FIFA, former leaders of the Ukraine, Panama and Tunisia, and Lebanon’s entire political system.

In the statement announcing the "dirty nine," Transparency International said all the nominees were central to an “abuse of high level power that benefits the few at the expense of the many, and causes serious and widespread harm to individuals and society” in a way “that often goes unpunished” yet “concerns millions of victims around the world.”

Delaware’s over the top pro-business Chancery Court, its statutory trust provisions, non-existent taxes, as well as its extremely user friendly limited-liability-corporation registration process, has drawn in more than 60 percent of Fortune 500 companies and over half of America’s publicly traded companies. Back in 2012, the New York Times reported that Delaware had more registered corporations than it had residents, roughly one million compared to fewer than 900,000 people.

Like the international version of a tax haven, Delaware offers a form of tax sanctuary for corporations that register there, permitting them to assign revenue they earn in other states as royalty income to their entity domiciled in Delaware, which does not tax such income. The most commonly cited example is Toys R Us, which established a Delaware subsidiary Geoffrey LLC ,which has as its asset the trademarks and trade names related to the company’s mascot Geoffrey the Giraffe. In order to use these trademarks, stores across the country have to pay Geoffrey LLC millions in royalties to the Delaware-based subsidiary, which will not pay any tax on that income in Delaware.

According to the Institute on Taxation and Economic Policy, the cherry on this tax-reduction sundae is that Toys R US can, in turn, take the royalty payment as a deductible business expense off their state tax returns. In 1990, Geoffrey LLC received $55 million in royalty income, “and Toys R US was able to avoid an estimated $2.75 million in state taxes as a result of this strategy,” according to ITEP’s analysis. A study of 2,500 Delaware registered corporations between the years 1995 and 2009 showed that the entities reduced their state tax liabilities by anywhere between 15 to 24 percent. Published estimates from a few years back indicated the “Delaware loophole” cost her sister states close to $10 billion in lost revenue

In fact, the business case is so stacked for registering your business in Delaware some lawyers argue that to not advise their clients to do so would be malpractice. What the Times story also reported was that the paper of record had several of its corporate entities domiciled in Delaware. (Salon Media Group is also registered in Delaware.)

But just as Delaware has become the place for legitimate business of all shapes and sizes, it has long been flagged by international integrity monitors and federal law enforcement as a fertile ground for organized crime and accomplished fraudsters. Critics say that obtaining a Delaware LLC requires less disclosure of personal information than what’s needed to obtain a library card. As a consequence, it is nearly impossible to determine what lawyers call the beneficial ownership, or the individual or individuals behind the LLC, which now has easy access to the American banking system.

Back in 2008, former Senator Carl Levin cited a 2000 U.S. General Accountability Office report, “Suspicious Banking Activities: Possible Money Laundering by U.S. Corporations Formed for Russian Entities,” which documented how just one person was able to set up 2,000 Delaware shell corporations and, “without disclosing the identity of the beneficial owners, open U.S. bank accounts for those corporations, which then collectively moved about $1.4 billion through the accounts.”

In Congressional hearings back in 2006, federal prosecutors and members of the Department of the Treasury’s Financial Crimes Enforcement Network testified that Delaware and other states' failure to collect basic information on the beneficial owners of legal business entities formed under their jurisdiction had short circuited investigations and prosecutions of cases involving terrorism, money laundering, securities fraud and tax evasion. At the time, Treasury’s task force had flagged close to 800 instances of suspicious international wire transfers where the identity of the participants were shielded by U.S. shell corporations.

In response to a query from Salon on Transparency International’s designation, Delaware Gov. Jack Markell’s press office forwarded a statement from the office of Delaware’s Department of State:

“While no U.S. state collects beneficial owner information, the federal government already does. Delaware and other states have already taken important steps to deter fraudulent activity – prohibiting anonymous bearer shares, giving law enforcement access to the name of a natural person for every company, and requiring limited liability companies to retain ownership information available to law enforcement with a subpoena. Along with Nevada and Wyoming, we have enacted laws to regulate the activities of commercial registered agents and deter the promotion of shell companies, with penalties for agents and businesses that violate these laws. And we fully cooperate with investigations of U.S. law enforcement agencies including the FBI, Financial Crimes Enforcement Network and Office of Foreign Asset Control.”

Worth noting: Delaware’s functioning as America’s home-away-from-home sanctuary for all business, big and small, brings in $1.1 billion dollars a year in revenue to the state coffers, roughly a quarter of the state’s annual budget.

“This is Delaware’s industry,” says William Black, professor of Economics and the Law at the University of Missouri and Kentucky. “They sell corporate leaders protection from compliance from fiduciary obligations and the provisions of law like anti-money laundering statutes.”

Boosters of Delaware say that the major reason businesses choose Delaware is their business savvy Chancery Court, which has been sorting out commercial equity issues since the 1790s and today has jurisdiction over suits in which the massive universe of Delaware entities are named as defendants.

Black -- who as a federal bank regulator blew the whistle on the role of Congress in the Keating 5 (McCain, Glenn et al) savings and loan scandal -- says Delaware’s Chancery Court is at the heart of the problem, noting it has enforced trusts between parties in a way that “allows you to eliminate the fiduciary duty of standard of care for shareholders and eviscerates the fiduciary duty of loyalty through their court decisions.”

However, for James Henry, a senior fellow with the Columbia University Center on Sustainable Investment, Transparency International’s singling out of Delaware for “social sanction” misses the mark.

"This comparative analysis that just singles out an individual tax haven jurisdiction like Delaware is misleading,” according to Henry. “Sophisticated tax dodging never just relies on one jurisdiction. This is a global industry that stitches these sophisticated schemes together across multiple jurisdictions using banks, law and accounting firms around the world."

“Yes the U.S. has work to do on this and it should take the lead,” says Henry. “But to really make a difference you need international cooperation within major financial secrecy jurisdictions. The problem is global and it has to be addressed globally.”

Nevertheless, law enforcement has long complained that shell corporations can easily be used by terrorists, drug cartels and corrupt politicians, critics contend they also help concentrate wealth and preserve it to the detriment of the broader society.
"The proliferation of these kinds of shell corporations out of places like Delaware is contributing significantly to the increase in wealth inequality where wealthy individuals and multinationals can exponentially increase their wealth by hiding it in these low tax or no tax jurisdictions," says Clark Gascoigne, Interim Director at the Financial Accountability and Corporate Transparency (FACT) Coalition. "At the same time we see regular citizens in the U.S. and the rest of the world dealing with stagnate, or even declining wages while still having to shoulder more and more of the tax burden."