Rep. Lewis called the Clintons' welfare bill "an abandonment of our morality"—but rewarded Hillary with his support 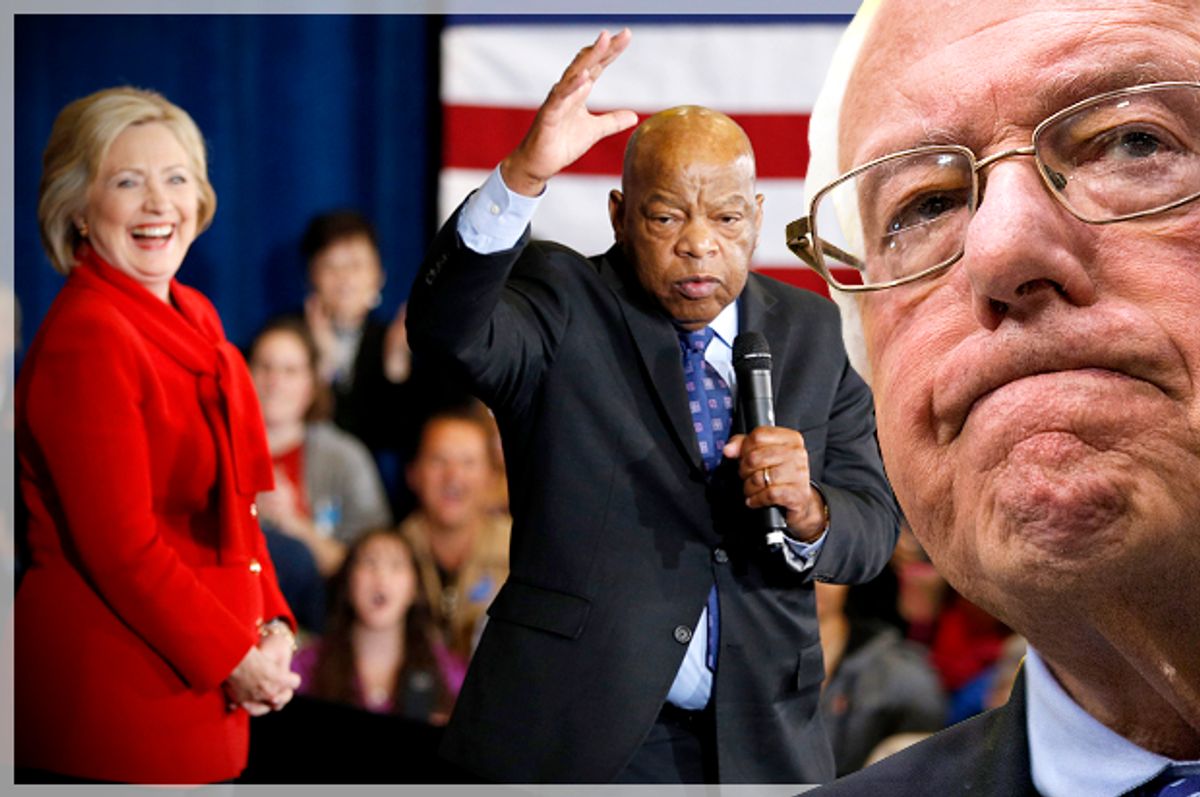 "How can any person of faith, of conscience, vote for a bill that puts a million more kids into poverty?" Rep. John Lewis asked on the House floor in July 1996. "What does it profit a great nation to conquer the world, only to lose its soul?"

Lewis was speaking in opposition to the so-called "welfare reform" overseen by the Clintons. Among Bill's 1992 campaign promises was to "end welfare as we know it." In 1996, with the steadfast help of Hillary, he fulfilled that promise.

President Bill Clinton proudly signed the Personal Responsibility and Work Opportunity Act, which was based on legislation first proposed by Republican Speaker of the House Newt Gingrich; Hillary, meanwhile, enthusiastically lobbied on behalf of the bill. The Clintons' welfare reform axed the Aid to Families with Dependent Children federal assistance program, which the Social Security Act had created six decades before, and replaced the New Deal program with the drastically weaker Temporary Assistance for Needy Families program.

The Intercept reported on Lewis' dissent in a piece detailing how current Republican presidential candidate John Kasich and the Clintons collaborated on the legislation, which helped double extreme poverty in the U.S.

As Lewis warned, a scientific study released at the time found that the gutting of welfare would push more than a million children into poverty. Three senior officials on welfare policy resigned from the Clinton administration in response to the legislation. Peter Edelman, a legal scholar and longtime friend of the Clintons who served as an assistant secretary at the Department of Health and Human Services and quit in protest, said he "personally handed" a copy of the study to the president.

Edelman told The New York Times "I have devoted the last 30-plus years to doing whatever I could to help in reducing poverty in America. I believe the recently enacted welfare bill goes in the opposite direction."

In "The Worst Thing Bill Clinton Has Done," Edelman's 1997 article in The Atlantic, he warned that "the bill that President Clinton signed is not welfare reform. It does not promote work effectively, and it will hurt millions of poor children by the time it is fully implemented." He called it "the major milestone in the political race to the bottom."

Reflecting on the Clinton-backed legislation on the House floor, Lewis said "The bill we are considering today is a bad bill. I will vote against it and I urge all people of conscience to vote against it. It is a bad bill because it penalizes children for the actions of their parents. This bill, Mr. Speaker, will put 1 million more children into poverty.

"Where is the compassion, where is the sense of decency, where is the heart of this Congress? This bill is mean, it is base, it is downright low down," he continued, adding "This bill is an abdication of our responsibility and an abandonment of our morality. It is wrong, just plain wrong."

Two decades later, nevertheless, Lewis, a Democrat representing Georgia, appears to have forgiven the Clintons for their transgression, for heartlessly "abdicating responsibility" and "abandoning morality." In fact, he has rewarded the Clintons by endorsing Hillary and slamming Sanders.

"I met Hillary Clinton. I met President (Bill) Clinton," Lewis said. Writer and PhD student Douglas Williams, however, in a condemnation of the congressman's statements, pointed out that Lewis had told a Clinton biographer "the first time I ever heard of Bill Clinton was the 1970s."

Williams also stressed the fact that "every mention of Bill Clinton in [Lewis'] book "Walking with the Wind" described an instance that he opposed some policy that you cherished," not to mention the fact that, while Sanders was getting arrested for protesting with the Congress for Racial Equality civil rights group, Hillary Clinton was working for right-wing senator and 1964 Republican presidential candidate Barry Goldwater.

The American left overwhelmingly opposed the Clintons' gutting of welfare. Many pointed to the racism at the heart of Bill's and Hillary's anti-welfare campaign, with their propagation of the stereotype of the "welfare queen." Journalist and social and economic justice activist Barbara Ehrenreich noted that it was "hard to miss the racism and misogyny that helped motivate welfare reform."

As recently as 2008, Hillary has defended the welfare reform she pushed for as first lady. Characterizing the axing of the social program as a success, she insisted welfare "should not be considered an anti-poverty program. It simply did not work."

Today, Hillary consistently boasts of the work she has done for children. She frequently mentions her time as the head of the board of the advocacy organization the Children's Defense Fund, or CDF. What she always fails to acknowledge when reiterating this talking point, however, is that the CDF openly condemned the Clintons for pushing through welfare reform.

President Clinton's "signature on this pernicious bill makes a mockery of his pledge not to hurt children," declared CDF founder and President Marian Wright Edelman in 1996.

A decade later, in a 2007 interview with Democracy Now, Wright Edelman said "Hillary Clinton is an old friend, but they are not friends in politics." The CDF "profoundly disagreed with the forms of the welfare reform bill, and we said so," she stressed. (Wright Edelman is married to Peter Edelman.)

In his 1996 comments on the House floor, Lewis cited former Vice President Hubert Humphrey, who said "We can judge a society by how it treats those in the dawn of life, our children, those in the twilight of life, our elderly and those in the shadow of life, the sick and the disabled."

"I agree with Hubert Humphrey," Lewis said. "What we are doing here today is wrong. I say to you, all of my colleagues, you have the ability, you have the capacity, you have the power to stop this assault, to prevent this injustice. Your vote is your voice. Raise your voice for the children, for the poor, for the disabled. Do what you know in your heart is right. Vote 'no.'"

Sanders' policies — his calls for universal single-payer health care, free public higher education and greater social spending — would go a long way to help the children, elderly, sick and disabled in the U.S. Yet Lewis has implored Americans to vote "yes" for the very person who helped push through the welfare reform he so passionately inveighed against.

Lewis has a long and proud history in the civil rights movement, but appears to have abandoned this legacy in defense of the establishment candidate.