"My friends and I are indoor kids": Paul Rust on "Love’s" dorky movie themes, working with Judd Apatow and subverting rom-com clichés

Salon talks to the star and co-creator of the new Netflix dark comedy about single life in L.A. 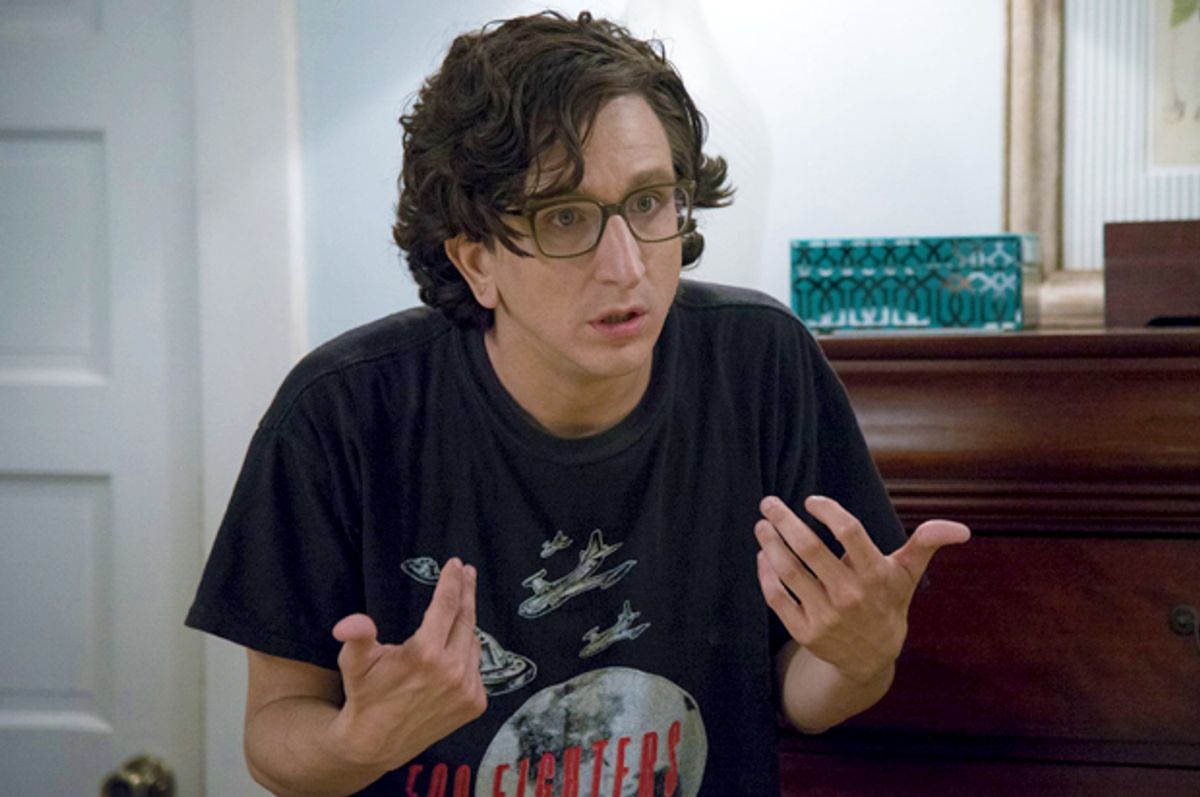 Near the beginning of the third episode of Netflix’s new series “Love,” a Dr. Drew-like radio host (Brett Gelman) gives his producer Mickey (Gillian Jacobs) some advice about how to recover from the end of a relationship.

“The best thing you can do right now — don’t try to feel better,” he says. “Just feel. Feel it all. Today and tomorrow. Just pass through it. Because maybe something positive has happened. Maybe you needed to clean out some emotional space for something good. Something new.”

We sat down with Paul Rust, who stars in the series and co-created it with wife Lesley Arfin and director/producer Judd Apatow, to talk about creating their first TV show, working with Apatow, and how music came to be such an important element of the story.

The show is barely out and you’re already writing and getting ready for Season 2. Do you have a start date for production?

We start shooting March 1. I’m trying as much as I can to be in the writer’s room right now. Once we start shooting, I’ll be on set almost all the time.

What did you do today?

Today we had the latest draft of the first and second episodes for the second season. Judd [Apatow] came in and gave his final tweaks for those two episodes.

Did you and Lesley write a pilot and take it around to studios, or did you have Judd Apatow involved at the idea stage?

My manager [Christie Smith] knew that Lesley had written on a couple of seasons of “Girls,” and I was co-writing “Pee-wee’s Big Holiday” with Paul Reubens, which Judd was producing. Leslie and I came up with a movie idea and pitched it to Judd, and Judd really liked the relationship and the dynamic but thought that a movie wouldn’t explore the relationship as fully as he wanted. So the three of us got together and wrote the pilot together.

You and Lesley Arfin are married. How much of the story came from you writing about your own relationship?

We used ourselves initially as a jumping-off point, but we quickly realized that we couldn’t make it entirely biographical because it wouldn’t be compelling television. [Laughs.] Lesley and I are more mature than the couple on the show, and Judd encouraged us to dial our maturity back to give them more ways to get in their own way. So it became more about past relationships and other people we knew.

Please tell me the “Carlito’s Way” thing — the cringe-y scenes where you’re sitting around with friends writing theme songs for movies — is not an actual thing.

Noooo. [Laughs.] We are dorks and we do get together and do movie marathons, but we don’t do the song thing. The closest thing we do is a horror movie marathon on Halloween that get progressively scarier. We start with something like a Disney movie and end with “Faces of Death.” We were trying to capture the idea that my friends and I are indoor kids.

I hear people describing some film and TV shows lately as “honest,” and I wonder a lot of times if they’re buying into the idea that they’re watching something like a performed documentary about the writer’s life.

I see that a lot too. I wonder if it’s because we’re five or 10 years out from reality TV being one of the predominant ways we watched stories, and maybe the fiction side saw something about capturing “reality” on camera and that people want something more sophisticated and more real. I don’t really like the term “honest.” If something entirely replicates reality, I kind of feel like what’s the point? With our show, I think there’s an attempt to make things feel truthful, but we don’t show somebody stuck in L.A. traffic every time they go somewhere because that would be boring.

There’s a line in the first episode where someone says, “Love doesn’t just happen. We have to choose it.” Did you set that up as a false premise to knock down or to prove out over the course of the series?

Some people have interpreted the title of the show — “Love” — as ironic. For me, it’s sincere. The idea that we have to agree with love is a genuine statement about love. It takes a while for them to admit that they even like each other. You’re not entitled to it. Love takes a lot of work.

There’s a lot of music in the show. Did you have a playlist of things you really wanted to use, or was it more a function of a music supervisor telling you what you could afford?

It was both. We had some songs we wanted to use, and we worked a lot of it out in editing. Judd was a big part of that that. There’s a Gravediggaz song in the second episode that Lesley wrote into the script. In the fourth episode, we’re at this party and play “Jet” by Wings. I was driving to work that day and listening to Jet, and as soon as I sat down in the writers’ room Judd said, “Hey, let’s use ‘Jet’ by Wings in this scene.”

Did you have to learn how to play that song?

I did. I had to learn it. They guy who plays the guitar in that scene is Mark Everett from Eels, which is a band that I’ve loved for a long time. He helped me a lot. I mean, it’s Paul McCartney. He’s a pretty good bassist.

That’s an episode where you see Gus’ friends in one place and Mickey’s friends in another. You are in this huge web of L.A. comedy writers/actors/stand-ups. Did you put those groups together, or was that more casting?

That was interesting. All the people who play Gus’ friends on the show are friends of mine from the Upright Citizens Brigade. A couple of people — Neil Campbell and Mike Cassady — have been friends of mine going back to the University of Iowa 15 years ago. When we got to casting the party, most of those are people that Lesley knew. There’s a professional skater and a photographer and musicians — a lot of people being their authentic selves.

And at the end of that episode you’ve got Rich Sommer and Kyle Kinane and you and Gillian Jacobs in one of the best scenes in the series.

Rich is so good. And John Slattery was directing, so we had this nice mini-“Mad Men” reunion.

You had several directors who are also good actors like Slattery, Steve Buscemi, Michael Showalter.

Were the rom-com tropes like the meet-cute and the best friend these elephants in the room that you had to navigate, or did you not think about it like that?

It’s tough — and I’m not the first person to say this — but clichés exist because they actually happen in real life. We didn’t want to break rules just to break rules. Some of those rules are there because it’s how people meet and how people have conflict.

But we had a lot of conversations around how to do things. Gus and Mickey meet when she forgets her money and he buys her some cigarettes, and we asked, “Are we saying that he gets into her world by buying her something? Is that fucked up?” So Gus offers, “You don't have to pay me back,” and she’s like, “Don’t be a fuckin’ hero.” So we call things like that out more than in some other romantic comedies.

Gillian Jacobs was good on “Community” at carrying a lot of baggage without wearing it on her face. Did you want a version of that for “Love”?

Gillian is an amazing actor, and I thank my lucky stars that we were able to have her on our show. We wrote the part with her in mind because of the very thing you’re saying. The thing I liked about her on “Community” was that she could play somebody who was broken or hurting but not performing it in a way that defends what the character is doing. On “Love,” I think you can have empathy for her even as a character who rubs people the wrong way.

I think an example of that is that I was never really sure whether she was clear on whether she’s an alcoholic or not. It wasn’t just denial or an elaborate coping mechanism.

Yeah, it’s a confusing thing. I’m sure it’s confusing for a lot of people. Drinking or taking a substance to escape makes you ask whether escaping is a bad thing. We go to the movies to escape. We eat food to escape. And we didn’t want her to be a TV-movie-of-the-week alcoholic. We wanted it to be more gray and real.

Text messaging and social media is something that’s pretty pervasive in society but isn’t inherently cinematic. Did you have a lot of discussion about how to communicate that by showing people on their phones or putting the text on-screen like some other shows have done?

We talked about it a lot. People use text and use Instagram, and we wanted to involve that in the show. We decided not to do text on the screen or hearing voice-over of what people were typing because we didn’t want the show to be slick. I love seeing that in “House of Cards” and “Sherlock,” but it didn’t feel right for our show where we’re trying to get how the characters see the world.

How weird was it for your wife to be sitting just off camera while you’re taking your shirt off and climbing into bed with someone?

Like Hey, why can’t you bring some of that home! [Laughs.] Surprisingly, it was never uncomfortable. Lesley is an artist, and she understands. I was more in my head about it than she was. She said she wanted to tell a story and not to get too in-my-head about it.