Oscars reward actors of color when they play stereotypes: "They were not the same kinds of roles that a non-minority would have" 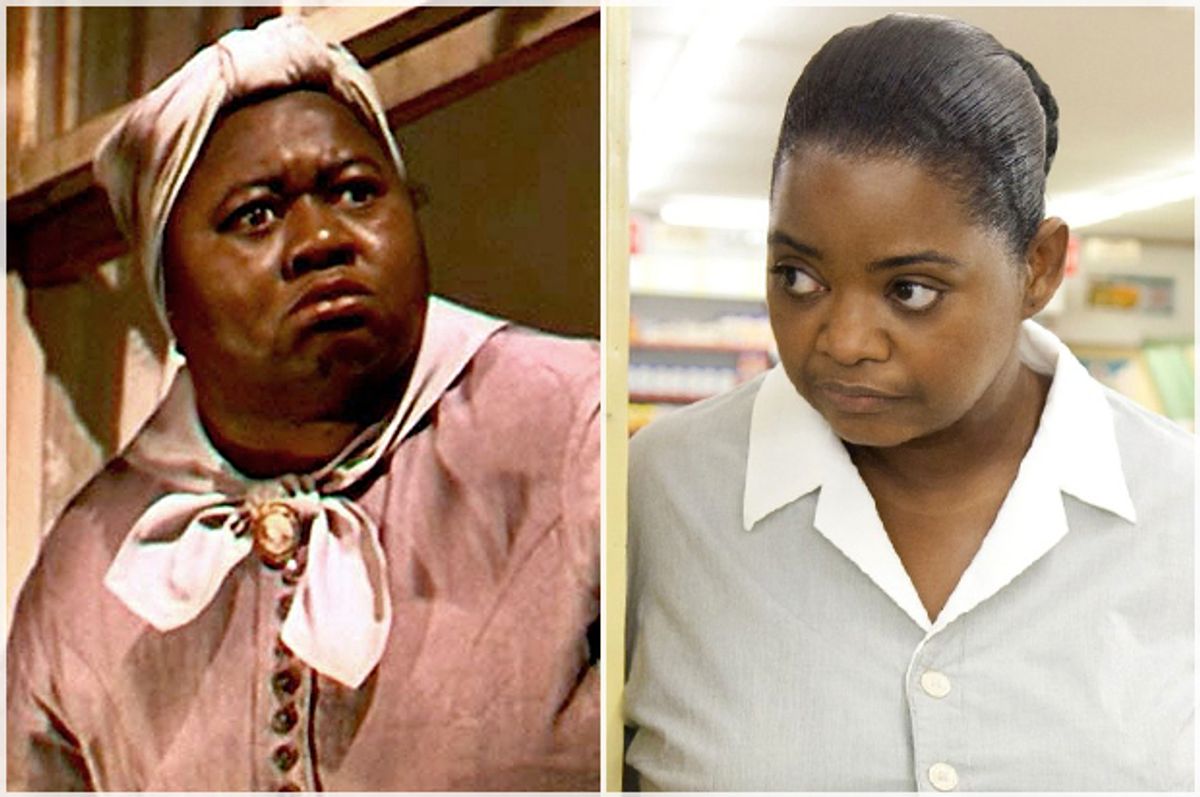 Hattie McDaniel in "Gone With the Wind," Octavia Spencer in "The Help"
--

By now, the news about #OscarsSoWhite is out. But a new report collects data and presents with in a series of graphics in a fresh and revealing way. The project – “6 Facts That Prove the Oscars Are More Racist Than You Think,” by Venngage – mixes text and interactive imagery to tell the story. Besides the impact that a visual approach brings to the issue, the report is interesting for reason that have to do with its exposition and not just its presentation.

The text of “6 Facts” considers roles for actors of color going back to Hattie McDaniel, who in 1940 became the first black actor to win an Oscar. She collected her best supporting actress award, for her performance as a maid in “Gone With the Wind,” and returned to her seat in a segregated part of the hall.

In addition to looking at raw numbers, the project considers the types of roles available to nonwhite actors as well. The report doesn’t come out and say it, but suggests that as bad as things are now, the Academy Awards were significantly more limiting to actors of color in the past. Some racial stereotypes -- the Latin Lover, the Noble Savage, the Sexpot, the Sapphire (a sassy or angry black woman) and the Thug – persist, but were much more prevalent in previous decades. It may not make you feel better about The Academy, though.

Salon spoke to Eugene Woo, a Toronto-based data scientist who did the research and analysis for the project and helped found the company. The interview has been lightly edited for clarity.

It’s not a secret at this point that there’s a problem with the Academy Awards. Working on this, did you find that the Oscars – if you consider it historically -- was worse than you expected?

We all knew, on the surface, about the numbers. We knew that going in. But we said, let’s dig a little bit deeper. The thing that surprised us that when we looked at roles where minorities were winning awards: We saw that a lot of them were stereotypes. They were not the same kinds of roles that a non-minority would have. That was the thing that was interesting.

Not just a shortage of roles, but the kinds of roles an actor of color can play are limited compared to what a white actor can play.

Correct. And not only limited. But also from the numbers, the Academy Awards rewards certain kind of roles for minorities. For [playing] famous people -- that is very disproportionate: A little over half the roles won by minorities were depictions of famous people.

What kinds of stereotypes are showing up for black and other nonwhite actors?

The further back you go in time, the more examples you have. In the early days, the black roles were very stereotypical. Starting with the first winner, Hattie McDaniel – with the Mammy stereotype. She won that role playing a stereotype. And later the Magic Negro role – it was still fairly common when Whoopi Goldberg won her award in “Ghost.” She played a fortune teller who could actually see the ghost – and so she was giving advice to the protagonist Patrick Swayze. Which fits the Magical Negro stereotype. Yes, you’ve put a minority in there, but often it’s a minority who has some sort of power. Spike Lee really went off on the Magical Negro stereotypes.

What about the old stereotype of black men playing criminals and thugs?

I don’t think that’s as bad a problem now. The thug stereotype – if you ask me, I haven’t done any crazy research – I think Latinos are probably more likely to be more stereotyped as a criminal thug, with an inner-city gang. It’s become more of a Latino stereotype now.

So I guess for every nonwhite actor playing a maid, a magical figure, a criminal, a famous historical character, there are roles they’re not able to play. What are the kinds of minority roles that are going missing? Where they don’t seem to be represented. Professionals, educated people, intellectuals? Is that where we see very few actors of color?

In general, if you look at the lead roles, you don’t see a minority playing an everyday parent with a family, or what you’d call a non-stereotypical role. It’s obviously gotten a lot better. And in general stories about minorities in the lead roles. If you look at what’s coming in the theaters this week, it’s few and far between.

What seems to be the root of the problem? Does it seem to be bigger than the Academy?

Academy members are fairly white and male. But if you go beyond that, it’s a systemic problem. We’re not the only ones saying it. If you look at film executives and film studio heads, it’s about 90 percent white, and 83 to 61 percent male [respectively]. So if you look at the gatekeepers – the ones who make decisions – they’re not very diverse. And the same with directors. There’s a study from the University of Southern California, where they looked at the top 107 top grossing films, only seven movies were made by black directors – seven movies and five black directors. Obviously directors have a lot of influence over what stories to tell.

So the idea behind the project is that graphics can tell the story in a way that word and numbers can’t?

Yes. I read a lot of articles that just looked at the numbers. If you look at the numbers for African-Americans, they aren’t that bad: Ten percent of black actors have won, and the black population is 12 to 15 percent. So there’s a 15 to 20 percent discrepancy, but it’s not that bad. But when you dig deeper, and see the roles they play – the acting was great, nothing against the acting – some of them were stereotypical roles.

So we tried to give a different perspective on the numbers. There was an article in The Economist that said, “Oh there isn’t that much discrepancy.” But when you look at the stereotypes. And when you look at the breakdown between lead and supporting roles – there’s very few winners in lead roles from minorities. Less than 10. Once you break it down, it’s not true that the discrepancy is small.

This presentation is pretty damning. Does it seem like things are getting better; are you optimistic?

Yes — there’s been lots and lots of publicity around this. The Academy has already passed a proposal – I think they will change. If you look back historically, you see they have changed. I’m fairly optimistic about that.