The last stand of tolerance in the Republican Party: What Trump vs. Rubio would reveal about GOP voters

If the race comes down to Rubio vs. Trump, GOP voters will finally tell us what they think it means to be American 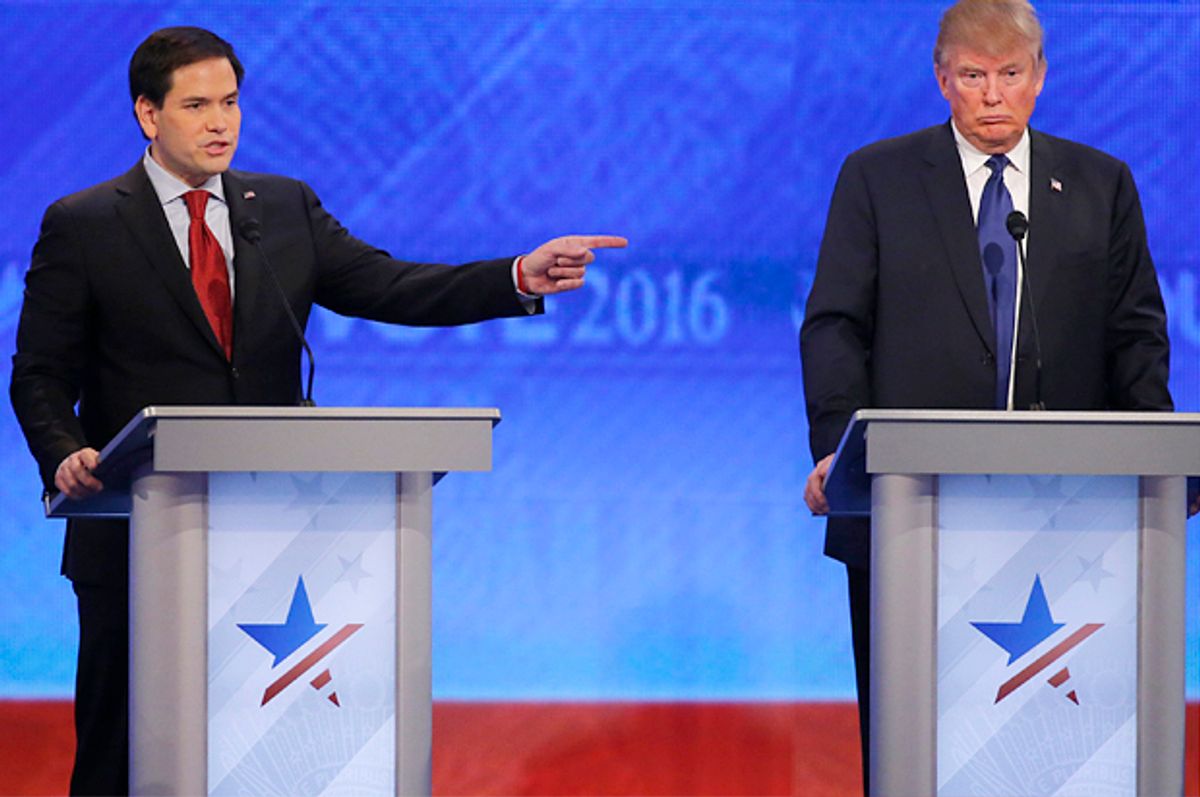 The reports of the Bush dynasty’s collapse are greatly exaggerated; but now that Jeb’s disastrous campaign has finally reached its finale, it admittedly does feel like a distinct era of Republican Party politics is leaving the stage with him.

For a long time — for nearly 50 years, in fact — the Bush family has attempted to ride the conservative movement all the way into public office. And despite embodying so much of the kind of patrician, New England-style Republicanism that the conservative movement ostensibly stands against, the Bushes have mostly profited from the relationship. (After all, two presidencies and one popular governorship ain’t half bad.)

But that’s all over now. And part of the reason why is because the delicate balance that helped H.W. and W. land in the White House is no longer sustainable. For decades, the Bushes would humor nativists on the campaign trail, then mostly ignore them upon assuming elective office. The stump speech was for Rush Limbaugh; the budget was for the Chamber of Commerce. It worked for Poppy in ’88, and Dubya pulled it off twice.

It’s during Jeb’s turn, however, that these chickens are coming home to roost. A sizable chunk of rank-and-file Republicans are wise to the bait and switch now; pandering to the Birchite wing of the Republican Party with dog-whistles won’t cut it. If you want to win now, you have to speak in the Manichean language of talk radio. You have to be not just willing, but eager, to divide the world into “us” vs. “them.”

Jeb couldn’t do this — or perhaps it’s better to say that he could no longer do it well enough. There was little doubt that he was conservative (very conservative, even). But it was clear, from his rhetoric to his family to his policies on immigration, that he still believed in that bare-minimum form of cosmopolitanism. He was not willing to say that some people will always be outsiders, no matter what.

So is the GOP as the Bush family once knew it finished? Is the Republican Party just a modern form of the Know Nothing movement? Has a kind of illiberal populism become the sine qua non of Republican Party leadership? Is today’s GOP nothing more than a vehicle for a distinct kind of white identity politics, full stop?

For a long time now, well before Donald Trump started running for president, that’s certainly been the way it’s looked. But while it’s tempting, I’m not ready to make such a definitive judgment. Not while Sen. Marco Rubio still has a chance. Because although he is a radical, he’s also, like Jeb, a bare-minimum cosmopolitan. He’s still willing to at least pretend that a person can go from being one of “them” to one of “us.”

You can find some inklings of Rubio’s bare-minimum cosmopolitanism in those few policy stances he has yet to abandon. But the truth is that political campaigns — and especially primary campaigns — are not usually decided by anyone’s white paper. Emotion and identity are more influential. And they’re more likely to be what determines whether Republican voters go with Rubio or Trump.

What the next, “national” phase of the Republican primary will show us, then, is what Republican voters really mean when they talk about what it is to be an American. For Republicans like Rubio, Americanness is most fundamentally about personal values and the country’s governing system. For Trump, on the other hand, it’s not a psychological or intellectual question. It’s the soil, the genes, the blood.