Swift ups the "support Kesha" ante by giving her $250k, Lovato fires back that she's not impressed 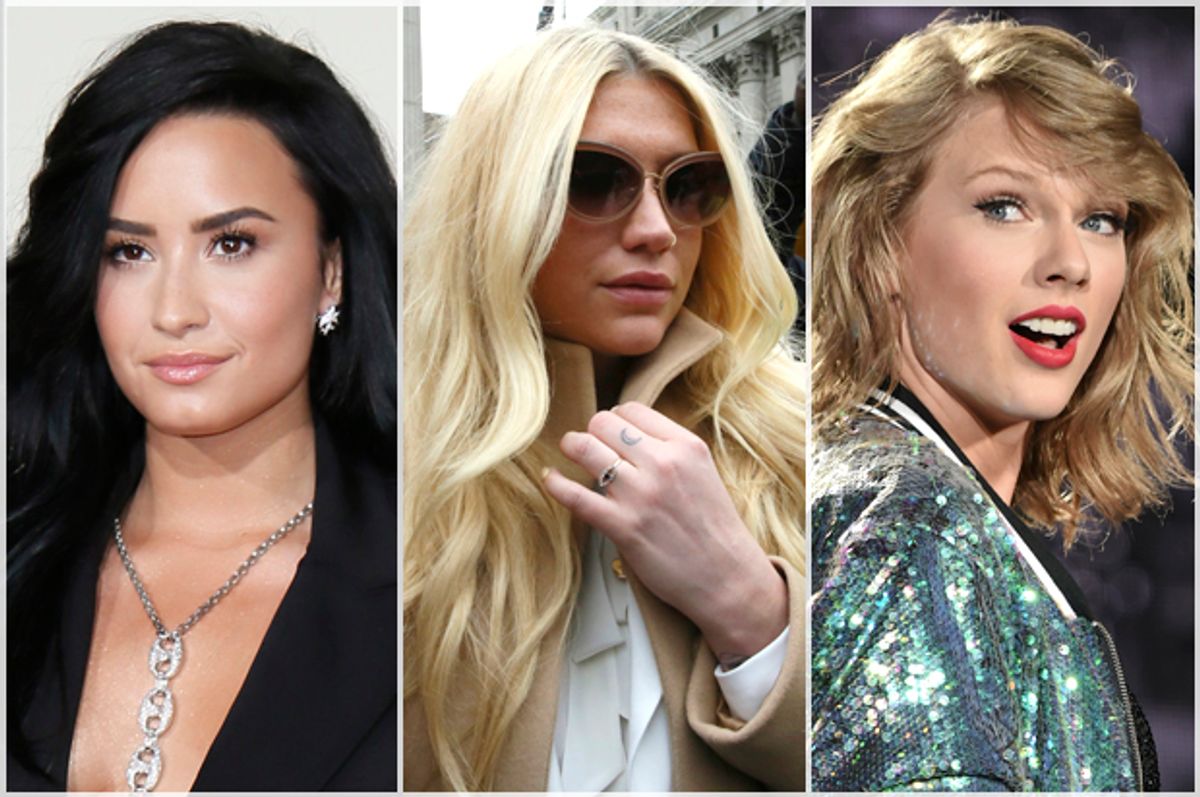 If you were concerned that the Kesha saga didn't have enough Taylor Swift in it — preferably with a twist of shade seemingly cast in the Swift direction — that's now been rectified. So let's get up to speed, before Kanye jumps in.

On Friday, New York Supreme Court Justice Shirley Kornreich declared that "My instinct is to do the commercially reasonable thing," and uphold Kesha's recording contract with Sony Music's Kemosabe Records and producer Dr. Luke (Lukasz Gottwald). Two years ago, Kesha filed suit against Dr. Luke — who signed her when she was just 18 — claiming that he "had raped her, and that she needed to go to the emergency room" and that she had been denied "any meaningful profit from her work due to Dr. Luke's exploitation of her over the last decade." She sought to nullify her current deal to "allow her to freely enter into contracts with other recording and publishing companies." Friday, Kesha was openly sobbing in the courtroom when Kornreich refused to "decimate a contract that was heavily negotiated."

The 28 year-old singer and songwriter, who shot to fame with 2009's ubiquitous party anthem "Tik Tok," now faces the choice of continuing her music career with a company she claims failed to protect her, or not furthering her musical career. In September, her attorney Mark Geragos explained, "She cannot work with music producers, publishers, or record labels to release new music. With no new music to perform, Kesha cannot tour. Off the radio and stage and out of the spotlight, Kesha cannot sell merchandise, receive sponsorships, or get media attention. Her brand value has fallen, and unless the Court issues this injunction, Kesha will suffer irreparable harm, plummeting her career past the point of no return." Dr. Luke's attorney's, meanwhile, have called Kesha's claims a "vicious smear campaign to ruin Luke's reputation" and "to extort a contract renegotiation and money."

Friday's ruling brought an outpouring of support for Kesha from fans and her fellow artists, most of it in the form of simple declarations of solidarity with her. Lady Gaga tweeted, "There are people all over the world who love you @KeshaRose. And I can say truly I am in awe of your bravery;" Lily Allen said, "My thoughts are with @KeshaRose today. I'm sorry you've had to endure this experience;" Lorde wrote, "standing with @KeshaRose through this traumatic, deeply unfair time. send good vibes her way everyone." And Demi Lovato, who like Kesha has been outspoken about her struggles with eating disorders, shared a series of tweets about women's empowerment, saying to Kesha, "This is only gonna make you stronger, you brave and beautiful girl. Prayers are with you."  Within her tweets of support, she called on "self-proclaimed feminists to start speaking out or taking action for women's rights," too.

Superstar (and a self-proclaimed feminist — many read Lovato's tweet as a subtweet) Taylor Swift, however, made a different kind of statement. A spokesperson confirmed to Rolling Stone that she "donated $250,000 to Kesha to help with any of her financial needs during this trying time." Kesha's mother confirmed the gift Sunday on Twitter, calling it "Amazing."

But Lovato appears to have been underwhelmed by the gesture, tweeting cryptically Sunday, "Take something to Capitol Hill or actually speak out about something and then I'll be impressed." Lovato later asserted, in response to a Swift fan, that "Not everyone has 250K to just give to people. Would love to but I didn't grow up with money and def haven't made as much as her. At least I speak up about s__t that's uncomfortable rather than trying to be politically correct 24/7… I didn't shade Taylor… I'm just tired of seeing women use 'women empowerment' and 'feminism' to further brands without actually being the ones that have uncomfortable conversations."

Swift, who signed a publishing deal Sony/ATV herself when she was only 15, may feel she can't speak out more on the subject. (Her record label is Big Machine/Universal.) And as a colleague points out, she worked on several of her last hits with writer and producer Max Martin, who also happens to be friends with Dr. Luke. She also notes that for a star as extremely well compensated as Swift, a gift of $250,000 is likely "a drop in the bucket."

It's certainly curious that in light of her gift, Swift has not made a public statement in support of Kesha, and it's true that a quarter of million dollars won't break her bank. Yet it's even more baffling for someone like Lovato to apparently criticize a woman for offering significant financial support to another female artist — one who says she's been sexually assaulted, one who faces significant legal fees and severely curtailed career opportunities. While Kesha is no doubt appreciative of the encouraging tweets, the cold reality of her case is that she also likely needs support of the financial kind as well. Lovato claims she's willing to have "uncomfortable" conversations, but there are few topics more "uncomfortable" in our culture than the harsh truths around money. And if it were your future on the line, which would you need more right now — conversation or cash?