It's probably no surprise that Nicole Arbour, the "comedian" behind the "Dear Fat People" videos, is a Trump fan 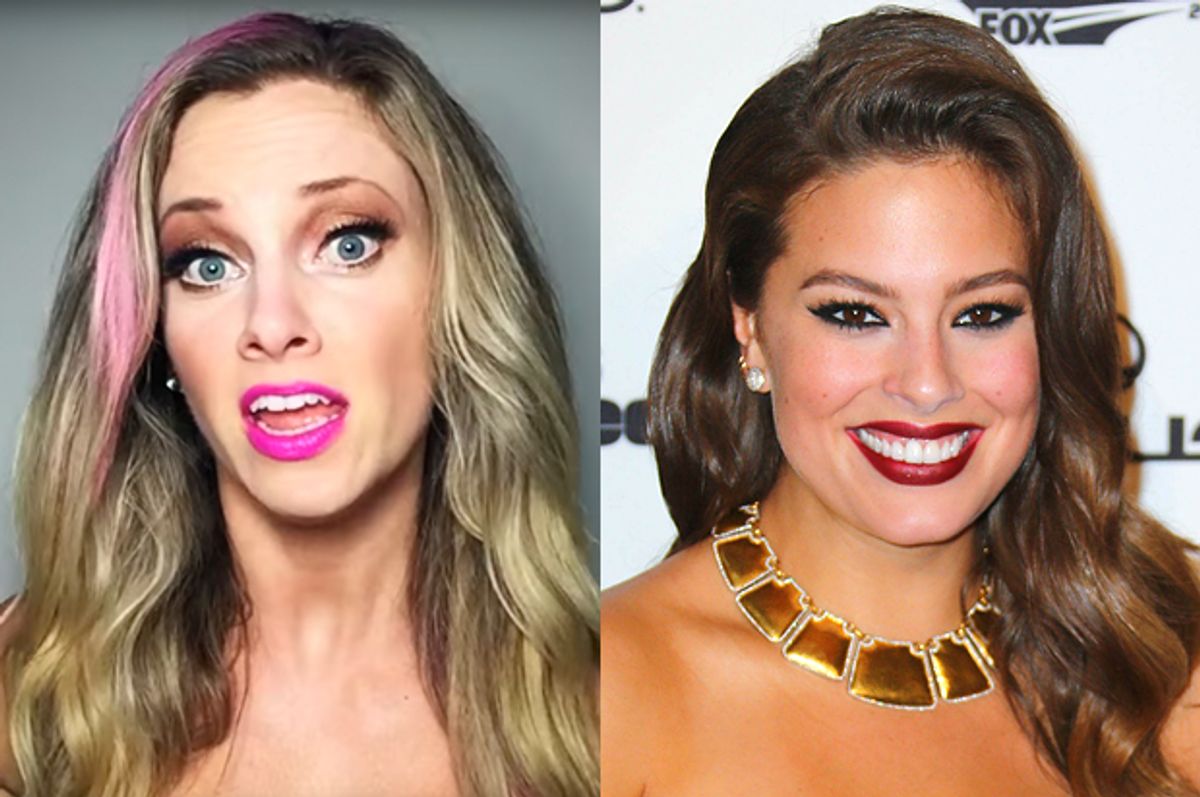 Nicole Arbour of viral video “Dear Fat People” fame is back, and just as offensive as ever with a new video entitled “Dear Fat People 2: The Second Helping,” in which she rails against Sports Illustrated’s decision to put plus size model Ashley Graham on the cover of their recent swimsuit issue. Arbour is annoyed at their choice because “Sports Illustrated models are the mecca of physical perfection when it comes to modeling,” as she puts it in the video. Also, she’s mad because she claims Graham is “Photoshopped to fuck in all her photos,” even though Graham has stated that her cover image is not retouched. The model told Access Hollywood Live, “They did not take out things. They didn’t reshape my body in any way, shape or form.”

Arbour claims that Sports Illustrated put Graham on the cover simply to court controversy (pot, meet kettle), ignoring the fact that Graham, age 28, has been working as a model since the age of 14. I’d venture that Arbour, who only refers to Graham as “a plus size model,” doesn’t know the first thing about her, and didn’t bother taking the time to learn. Why would she, when she’s really only rehashing the hateful, ignorant and false statements she made about fat people in the first video. Case in point: “If any of the other models showed up looking like her, they’d be fired. How the fuck is that fair? The truth is if she worked out a little bit more, she wouldn’t be plus size any more, which means she can’t sell shit to plus size women who’ve turned her into their hero. So to make money, she’s keeping the weight on.” Once again, Arbour somehow paints herself as an expert on body weight and would-be savior of fat folks, ready to cast aspersions on Graham and, by extension, the entire plus size modeling industry.

But then we get to the real heart of Arbour’s message: She feels left out. “I want to eat cookies and still be a Sports Illustrated swimsuit model; what’s next, you can be a midget and a Rockette? What’s wrong with having a physical standard for something?” She insists on conflating anyone not stick thin with unhealthy. By never naming Graham, she downplays the years of effort that have gone into crafting her look and career. She suggests that modeling is somehow not as much work for a plus size model if she’s not starving herself and striving for that physical standard that, for some reasons, seems vital to holding Arbour’s world together. She simply can’t conceive of diversity as being inclusive, rather than exclusive.

She spends the final third of her video railing against the notion that everyone should get a “gold star.” Instead, there should be that one standard of beauty—one that conveniently happens to be hers of tall, thin and blonde—and nobody else should be considered beautiful lest we somehow send the message that being whatever size you naturally are is okay. Not in Arbour’s view; if you’re not constantly striving to meet those punishing standards, then the world has somehow gone to hell in a politically correct handbasket. Clearly, to Arbour, it’s not just that she’s disgusted by fat people or images of not-thin models; she also wants all of us to want to embody those standards and to hate ourselves if we don’t. Perhaps, otherwise, her status as a thin person feels somehow less worthy if it’s not exalted above all others.

Arbour seems to think that life is a zero sum game; if one opportunity is given to, in this case, a plus size model, then it’s somehow harming all women who look like her. It’s a catty, competitive and disturbing belief system that inherently pits women against each other. She then goes on to attack the changes Mattel recently made to Barbie, including introducing a curvy Barbie doll. “Why can’t Barbie be a thin tall blonde girl?” she asks, then goes on to sound like she’s utterly lost her mind: “Essentially fat people thin shamed Barbie until she had to gain some weight.”

This is the essence of Arbour’s brand of ranting. Rather than exploring why people might want to live in a society where we can appreciate different types of bodies, without necessarily having to claim one as the ideal, Arbour reverts to her best defense mechanism: persecution. “Equality” therefore becomes a dirty word. To her, body positivity seems to mean an attack on thin people. Just as she’s offended by the very notion of fat people, as she made clear in her first viral video, that curvy Barbie might be one option of many, just like Graham’s cover is one of three different ones on this year’s SI swimsuit issue, flies right over her head.

Let’s keep in mind, however, that Arbour now claims that she planned out the launch of “Dear Fat People” specifically so she could go viral. She told Cosmopolitan in December, “I made a marketing plan behind it, the same way that anyone makes marketing plans for anything.” If that’s true, clearly it worked, and Arbour is milking every view, whether from haters or fans; her Twitter banner boasts that her videos have had 160 million views and counting. But I don’t think she’s a good enough actress to fake the reactionary statements she makes in this video, like “The world is going crazy. A chick with a dick won woman of the year” (referring to Caitlyn Jenner) and “Barbie had to look like she eats cheeseburgers to make feminists happy.”

Arbour is the Donald Trump of YouTube, willing to say anything, no matter how outrageous, simply for the attention, but in both cases, I don’t think they’re only doing it for the attention or the money. (Not coincidentally, Arbour is a big fan of Trump and wishes she could be his Vice President.) A part of Arbour, and I’d venture, a large part, genuinely believes the things she spews out. She casually equates thin shaming with fat shaming, ignoring all the ways fat people are discriminated against in the workplace, socially, by the medical establishment and beyond. But for Arbour, any perceived personal attack on her status as the most coveted body type is simply another weapon in her arsenal of tools to claim victim status.

Arbour, like Trump, loves to wield the term “political correctness” around, as if that’s all she has to say for people to realize that she’s speaking the truth amidst a sea of brainwashed idiots. In August, Trump told Megyn Kelly during a GOP primary debate, “I think the big problem this country has is being politically correct. I’ve been challenged by so many people, and I don’t frankly have time for political correctness. And to be honest with you, this country doesn’t have time either.”

Like Trump, Arbour hopes invoking the specter of “p.c.” will turn her into a heroic martyr. Sadly, for some of her viewers, it’s working. In their world, there’s no such thing as debate or nuance; why bother considering other points of view when you’re either with Arbour, or against her? Here’s a typical fan, who earned a retweet and praise from Arbour:

I know I’m giving Arbour the negative attention she feeds on by writing about her yet again, but I can’t help but be offended that Arbour continues to make such awful statements that are utterly out of touch with the direction the world is moving in around body image. It’s hard to take anything she says seriously, not only because she’s admitted she’s doing it to provoke, but also because she seems to have a persecution complex. Why else would she take the time to rail against Sports Illustrated’s decision? Taking her words to their logical extension, we can conclude that if women like Ashley Graham are considered beautiful, that threatens Arbour’s sense of self-worth. Why? Because we’ve now opened up room for appreciating a variety of body types, not as a “consolation prize,” as Arbour states in the video, but as valid, sexy and worthy in their own right.

Rather than “Dear Fat People 2,” which won’t teach you anything except how ignorant Arbour is, I suggest you instead watch Ashley Graham’s TEDx Talk about embracing her body and using her modeling career as a way to empower other women—and no, not just other plus size women. Unlike Arbour, Graham isn’t trying to reach an audience who thinks in lockstep with her, but to actually open people’s minds.