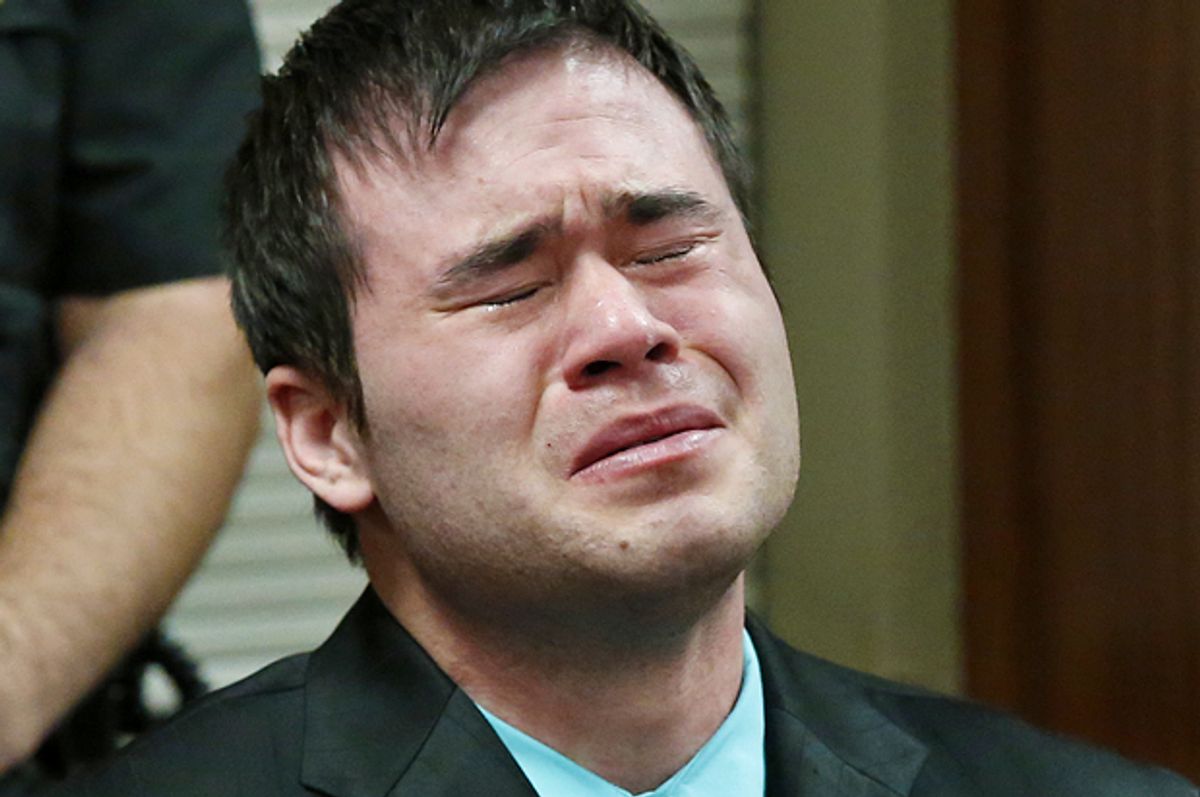 You know whose stories get told often enough? Men's. Especially men engaged in masculine fields of law enforcement or sports. Yet even in a world in which the man's point of view is the default point of view, this one went pretty far out there. So here's a lesson that maybe now the editors at SB Nation will consider — after a man's been found guilty of raping a bunch of women, the prime narrative can be something more than the tale of a "once-promising young man."

In a swiftly yanked SB Nation feature last week, writer Jeff Arnold asked, "Who is Daniel Holtzclaw?" Sure, for some, the answer might be, an Oklahoma City police officer who last December was convicted of eighteen sexual assault charges, including first-degree rape, forcible oral sodomy and sexual battery, involving eight of the thirteen women who have accused him of sexual abuse. But for Arnold and his editors, he was also an aspiring football player from Enid whose failed NFL dreams, combined with possible head trauma, may have contributed to his pathology. So over the course of nearly 12,000 words, Arnold delved into the mind of Holtzclaw, talking to his father and friends. And in the the final paragraph, he observed, "Pending an improbable successful appeal, everything he had worked for was now gone, likely never to be recovered, ever again."

ProPublica Reporter Madi Alexander quickly called the piece "the nicest depiction of a serial sexual predator I have ever read," while ESPN's Kevin Van Valkenburg said, "Know what? You shouldn't have to be a woman to see writing about the NFL dreams of one of the worst rapists in law enforcement ever is wack." Five hours later, the story was deleted, replaced by a note from editorial director Spencer Hall calling the piece "a complete breakdown of a part of the editorial process at SB Nation." He added, "There were objections by senior editorial staff that went unheeded. It was tone-deaf, insensitive to the victims of sexual assault and rape, and wrongheaded in approach and execution. There is no qualification: it was a complete failure."

On Monday, the writer himself weighed in. In a Twitter statement, Arnold apologized for "a lopsided account that failed to acknowledge the suffering of Mr. Holtzclaw’s victims." He also revealed that the story had been "reviewed and signed off on by at least four editors prior to its publication." So that's a minimum of five people who didn't object to a profile that observed, "Unlike in the past, when his shortcomings only kept him from playing professionally, these failures, as first defined by a prosecutor and then by a jury, carried much heavier consequences."

We all know the privileges of credibility, or authority, of power are conferred unequally. Holtzclaw's conviction was a moment almost no one — even Holtzclaw and his victims — believed possible. He was a former athlete. A cop. His victims were all African-American women from low-income neighborhoods, women he checked for prior arrests and outstanding warrants. As one of his accusers said in court, "There was nothing that I could do. He was a police officer, and I was a woman."

Maybe that's why when a "promising" man — especially one who is an athlete — suffers the pain of punishment for his sexual crimes, there is often a degree of head shaking for the poor guy. Three years ago, when Steubenville teenagers Trent Mays and Ma’lik Richmond were found guilty of raping a classmate, ABC News lamented not about the victim but the boys who "face incarceration in a detention center until their 21st birthdays and the almost-certain demise of their dreams of playing football." And CNN’s Poppy Harlow reported that it was "incredibly difficult even for an outsider like me to watch what happened as these two young men that had such promising futures, star football players, very good students, literally watched as they believe their life fell apart.” The NFL, among other professional franchises, has certainly done a consistently crack job of turning a blind eye to men accused of physical and sexual assault. As a lamentably spot-on Onion video once noted, gosh, it's tough when an athlete must "overcome the trauma of committing a terrible rape."

When human beings do evil things, there's a natural impulse to ask why. What would happen to a man to impel him to repeatedly sexually assault the women of the community it was his job to protect? But the narrative of the "promising" men and their sad downfalls invites sympathy for abusers. And it assumes, yet again, that the reader's point of identification is with a small town guy with dashed dreams — and not with the women he raped when they didn't come true.