"The Danish Girl" hypocrisy: If you want a major award for playing a trans woman, better make sure you're up for Best Actor 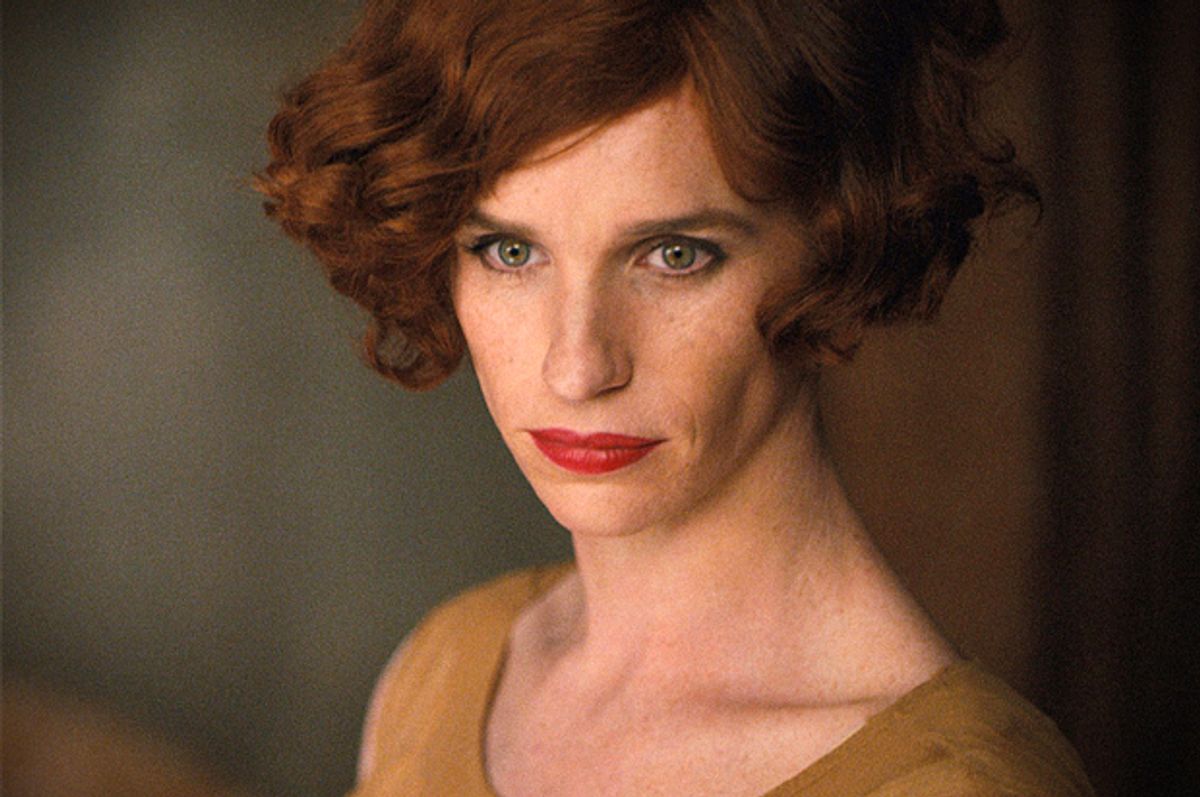 Recently, Rebel Wilson accidentally proved you can be strikingly tone-deaf and oddly prescient at the same time. During this month's BAFTA Awards, the “Pitch Perfect” and “How to Be Single” actress ignited a firestorm of controversy for what many believed was a joke intended to mock transgender people. Wilson joked about the Oscars’ lack of diversity, a widespread topic of debate over the past few months.

“I have never been invited to the Oscars because, you know, they are racists," Wilson quipped. “But the BAFTAs have diverse members. And that's what we all want to see in life, isn't it? Diverse members. One day I hope to return here to win a BAFTA myself. I have already been practicing my transgendered [sic] face.”

Wilson’s joke was incredibly inartful (note: “transgendered” is not a word, “transgender” is), and she was appropriately criticized on Twitter for it. “[I]'ve been practicing my cisgender face so i don't get harassed & assaulted in public!” wrote trans writer and personality Tyler Ford. Nicolette Mason, who is a contributing editor at Marie Claire, seconded the outrage: Did Rebel Wilson seriously say she was practicing her ‘transgender face’ at the BAFTAs? Stop it. Right now.”

Rebel Wilson might have put her foot in her mouth, but in drawing attention to the hypocrisy of awards season, it doesn’t mean she wasn’t onto something. What we missed in the outrage is that Wilson was right: As a cisgender actor, she’s far more likely to get nominated for an award for playing a trans person than an actual trans person. While actresses like Hilary Swank and Felicity Huffman have both earned kudos for transgender roles, those who live the experiences they portray on screen aren’t nearly as lucky.

At the BAFTAs, Eddie Redmayne was shortlisted for best actor for his performance as transgender painter Lili Elbe in “The Danish Girl.” Left off the list were actresses Mya Taylor and Kitana “Kiki” Rodriguez, who have received little attention for their performances in the transgender buddy comedy “Tangerine,” the Sundance hit famously filmed on an iPhone. Outside of recognition from niche groups like the Gotham and Indie Spirit Awards, the pair were snubbed by nearly every awards group in existence. (That, of course, included the Oscars, which has also nominated Redmayne for best actor.)

This is despite the fact that Taylor’s performance received major kudos from critics, nabbing fifth place in this year’s prestigious Village Voice Film Poll on the Best Supporting Actress list.

Because of the massive critical love from “Tangerine,” Taylor and Rodriguez were the first trans actresses to ever receive their own film awards push. On the groundbreaking campaign, the film’s producers, Jay and Mark Duplass, said, “One thing that has become apparent to us as we look at this stuff, it seems that the TV Academy has embraced what’s happening in the trans movement with ‘Transparent’ and ‘Orange is the New Black.’ We feel that the film Academy is a little behind on that front.”

The Duplass brothers are both right and wrong in that assessment—the Academy has embraced transgender stories, but only so long as they star a non-transgender (the term is cisgender) actor. In other words, performers who would compete in the opposite-gender category from the character they portray. In 2014, Jared Leto (“Dallas Buyers Club”) became the first ever person to win an Oscar — best supporting actor — for playing a trans person, but to date, no transgender performer has ever been nominated for the award. This is true also of the film category at the Golden Globes, the Screen Actors Guild Awards, and the Critics Choice Awards—groups that unanimously honored Leto.

This phenomenon is often known as “transface,” a term that refers to the casting of a performer who is not trans to portray a trans narrative. “The assumption tied to transface is that Hollywood is a discriminatory industry, which would rather cast a cisgender movie star who can be transformed to look like a transgender person through diet and cosmetics, than consider a minority actor with an authentic life experience for that role,” the Advocate’s Daniel Reynolds writes.

That’s not an assumption. That’s a fact. While television actresses like Laverne Cox (“Orange Is the New Black”) and Alexandra Billings (“Transparent”) have helped break the glass ceiling for trans actresses in the industry, they remain exceptions to the rule. Meanwhile, Jeffrey Tambor has won numerous awards for playing Maura on “Transparent”—and is a shoo-in for his second consecutive Emmy Award—while Cox is still waiting for her best supporting actress trophy.

When speaking about the backlash from the trans community to casting Redmayne, yet another non-trans actor in a trans woman’s role, “Danish Girl” director Tom Hooper noted that the film industry is not kind to transgender actors. “Access for trans actors to both trans and cisgender roles is utterly key,” Hooper said. “In the industry at the moment there is a problem: There is a huge pool of talent of trans actors, and access to parts is limited.”

Hooper claims he worked for seven years to get “The Danish Girl” made, and the project has been in turnaround so long that, at different points in its storied production, Gwyneth Paltrow, Nicole Kidman, and Charlize Theron were all attached. The implication is that without these actors to sell the film to financiers and awards voters, the film never would have never gotten made at all. And even if it did get produced with trans actors, it would have received the same mainstream cold shoulder as “Tangerine.”

As Autostraddle’s Mari Brighe writes, this is because studio executives, awards groups, and film audiences remain “deeply uncomfortable” with the reality of actual trans people; after all, just 1 in 6 Americans actually know a trans person. Casting a non-trans performer, especially a celebrity, in that role makes these stories more palatable.

“With that in mind, it’s somewhat clearer why there has been only minimal movement towards casting trans performers to play trans roles in films geared to large audiences,” Brighe writes. “While Hollywood is happy is exploit the public’s fascination with trans experiences, they’re not willing to risk their film budgets to elevate the standing of trans actors because they need to sanitize the film experience to ensure the comfort of their cis, straight moviegoers.”

This is a vicious cycle: We need trans actors to help foster public acceptance, but the public won’t accept trans actors. To break that pattern, Hollywood has to stop leading from behind. Trans women need given the platform or the opportunities to have their stories embraced on the same level as the cis actors who play them. The casting decisions that lead these actresses to be passed over for the limited parts that are available to them might be just “business,” but that leads to an industry where trans people remain unemployed and shut out.

There are numerous examples of this. After starring in Eric Schaeffer’s well-reviewed indie “Boy Meets Girl,” actress Michelle Hendley has just one additional credit to her name, a small part in NBC’s “The Player.” Since breaking out on “Transparent,” Alexandra Billings guested on TV’s “How to Get Away with Murder,” but her most promising film appearance is in a Denise Richards movie. Mya Taylor has booked a couple shorts. Laverne Cox might be a big star on television, but after a few featured roles (notably as Lily Tomlin's tattoo artist buddy in "Grandma"), she’s still awaiting the big-screen vehicle she deserves.

These actresses deserve the ability to help tell their own stories and shape the way that cinema portrays trans narratives. Movies like “The Danish Girl” have taken small steps forward by consulting trans women behind the scenes, in order to help actors like Redmayne figure out how to most empathetically portray them. But that will be meaningless unless we allow those women to break down boundaries by actually putting them in front of the camera.