Trump's rise proves we're full of loud, illiterate and credulous people — and he's a mirror of them 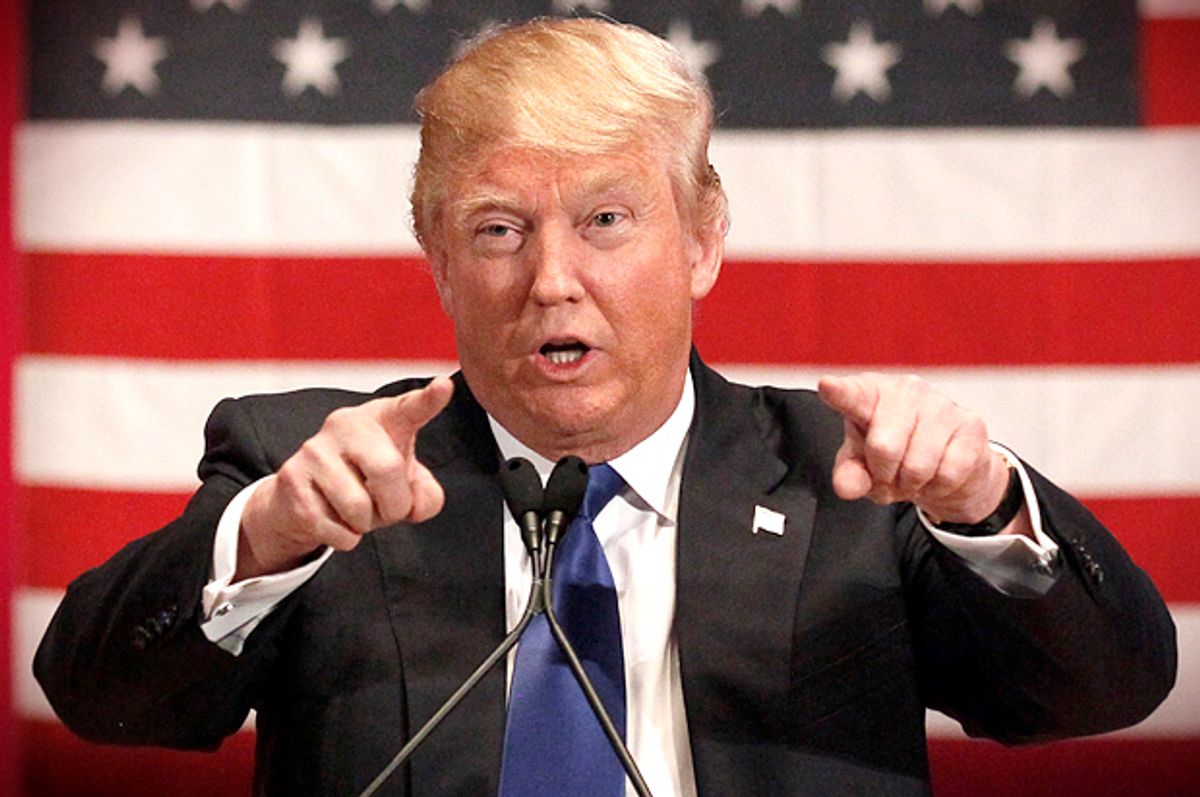 Before any votes were cast, when Donald Trump was the theoretical front-runner, the optimists preached patience. Just wait, they said. This will blow over. He's a clown, a huckster, a TV personality. There's no way he can win. It's just not possible.

Well, it's not only possible – it's likely.

Trump won again in Nevada on Tuesday night, by a massive margin, and he may well sweep the Super Tuesday states. If that happens, and it's the most probable outcome at this point, the race is effectively over. Trump will have won the nomination of one our two major parties, and he'll have done it with extraordinary ease.

I hate to have to say it, but the conclusion stares us in the face: We're a stupid country, full of loud, illiterate and credulous people. Trump has marched straight to the nomination without offering anything like a platform or a plan. With a vocabulary of roughly a dozen words – wall, Mexicans, low-energy, loser, Muslims, stupid, China, negotiate, deals, America, great, again – he's bamboozled millions of Americans. And it's not just splenetic conservatives supporting Trump or your garden-variety bigots (although that's the center of his coalition), it's also independents, pro-choice Republicans, and a subset of Reagan Democrats.

This says something profoundly uncomfortable about our country and our process. A majority of Americans appear wholly uninterested in the actual business of government; they don't understand it and don't want to. They have vague feelings about undefined issues and they surrender their votes on emotional grounds to whoever approximates their rage. This has always been true to some extent, but Trump is a rubicon-crossing moment for the nation.

Trump's wager was simple: Pretend to be stupid and angry because that's what stupid and angry people like. He's held up a mirror to the country, shown us how blind and apish we are. He knew how undiscerning the populace would be, how little they cared about details and facts. In Nevada, for instance, 70 percent of Trump voters said they preferred an “anti-establishment” candidate to one with any “experience in politics.” Essentially, that means they don't care if he understands how government works or if he has the requisite skills to do the job. It's a protest vote, born of rage, not deliberation.

In no other domain of life would this make any sense at all. If your attorney drops the ball, you don't hire a plumber to replace him. And yet millions of Trumpites say they don't care if Trump has ever worked at any level of government or if he knows anything about foreign policy or the law or the Constitution. It's enough that he greets them at their level, panders to their lowest instincts.

He even brazenly condescends to his supporters, as the opening quote illustrates, and they fail to notice it. Trump, a billionaire trust fund baby who inherited $40 million from his father, has convinced hordes of working-class white people that he's just like them, that he feels their pain and knows their struggle. He's made marks of them all.

People will say Trump is just another demagogue, a sophist with a talent for self-promotion. Or that's he a vacuous populist who craftily tapped into the zeitgeist. Or that other presidential candidates have succeeded without, shall we say, an understanding of the issues. But that understates Trump's significance.

Take Ronald Reagan. He exploded onto the political scene in the early 80s, and was famously ignorant by presidential standards. As I noted in November, Reagan's list of doltish quotes is long and impressive. But he won over the country with superficial appeals and a generic handsomeness. Trump's no Reagan, however. Reagan at least gave eloquent speeches studded with flowery rhetoric and serious-sounding aims. He was, after all, an actor who could read a script prepared by someone else with impeccable flair.

Trump isn't half the orator Reagan was, and he doesn't need to be. Trump has decided that voters are so clueless, so delirously angry, that feigned bigotry and empty promises to "make America great again" will do – no specifics needed. And he's obviously right. Debate after debate, speech after speech, Trump has personified the anti-intellectualism percolating in this country for decades. Is there any doubt it's working? He may be cynical, but he isn't wrong.

To be sure, the media shares some of the blame here. In an essay worth reading, Matt Taibbi lamented the decline of cable news. He makes a relevant point:“We in the media have spent decades turning the news into a consumer business that's basically indistinguishable from selling cheeseburgers or video games...When you make news into this kind of consumer business, pretty soon audiences lose the ability to distinguish between what they think they're doing, informing themselves, and what they're actually doing, shopping.”

All of that is true, but still we're left with a demand-side problem: The people are getting what they want, and what they want is to have their idiocies and their discontent beamed back at them. Trump is clearly more than a media construction. He's everything dumb and regressive about our political culture distilled into a single candidate. And he exists only because a sufficient number of Americans want him to – that's the problem.

The Founders of this country were Enlightenment-era elitists. They represented everything Tea Partiers and Trumpites abhor – free inquiry, progress, science, and reason. Humans being high primates, they wondered whether the average citizen could be trusted with a democracy, whether the fury of the mob could be contained. They were wrong about a lot of things – race in particular – but a Trump nomination, perhaps more than anything else, would be the ultimate vindication of their concerns.