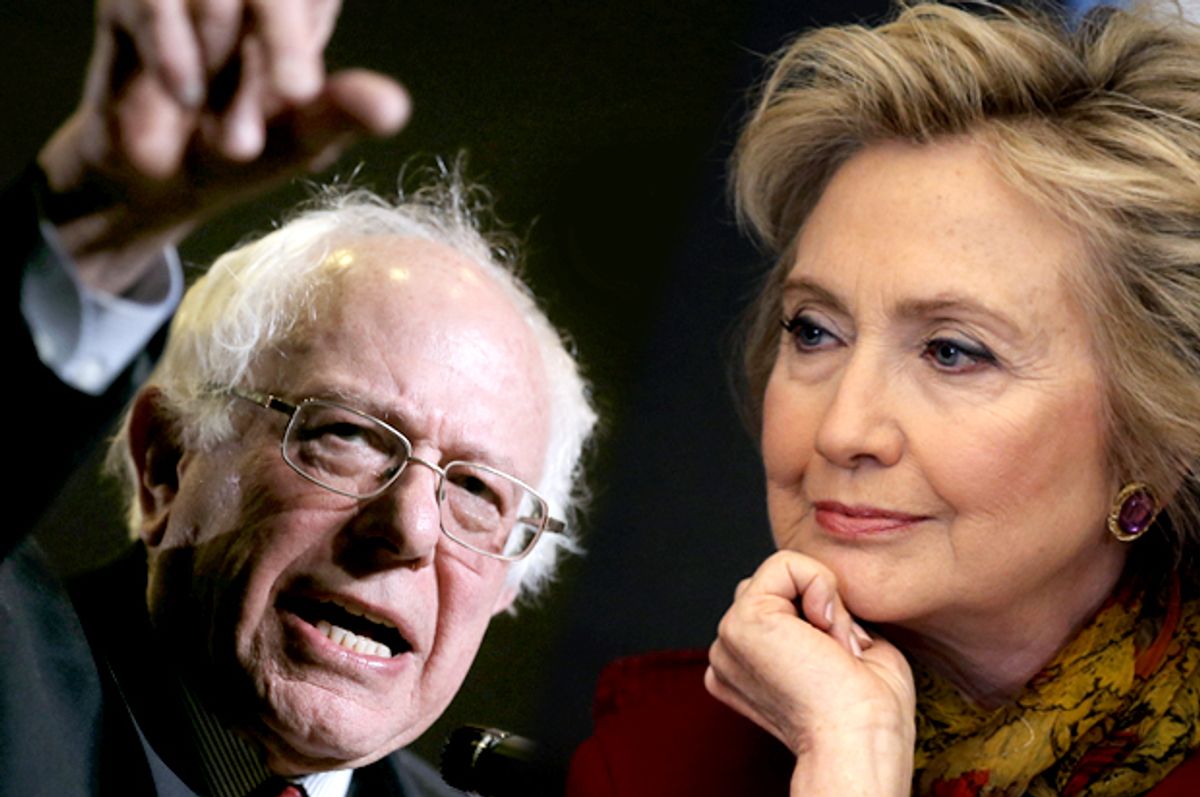 Ask not for whom the bell tolls, Hillary fans. Because right now? You’re at that moment in the movie where the teenage girl and her friends high-five each other for escaping from the monster’s den, and out in the audience we see the guy with the chainsaw come out of the woods behind you and we start screaming.

Political commentators by the dozen have spent the last few days digging Bernie Sanders’ political grave, arranging the flowers and ordering the blintzes. Much as it galls me to say this, they probably aren’t wrong. In the first place, they aren’t wrong because the outcome of this race was known in advance, and only briefly seemed in doubt after Sanders’ unexpectedly big win in New Hampshire. Hillary Clinton’s narrow victory in the Nevada caucuses provides at least the flavor of legitimacy to a narrative that was already written. One of the many truths behind Joan Didion’s long-ago assertion that politics is more a subset of show business than the other way around lies in the fact that both enterprises demand the suspension of disbelief. We have to pretend that we didn’t know what would happen.

If conventional wisdom holds true, and if a wider victory in South Carolina this weekend and a big delegate haul on March 1 leaves Clinton with a clear pathway to the Democratic nomination — well, first of all, that’s a lot of “ifs” and this is not a big year for conventional wisdom. Consider the predicament of that other party, the one that appears ready to nominate Lord Voldemort as played by Al Pacino in a Funny or Die skit instead of an actual candidate, and where the guy who consistently polled well against both Clinton and Sanders has already dropped out.

But let’s stick with the hypothesis that Nevada means that Bernie’s all but toast and Hillary’s once again inevitable, at least for now. I would encourage Clinton supporters to keep the gloating and the grave-dancing to a minimum, and not to put down nonrefundable deposits for Inauguration Day hotel rooms quite yet. Even with the infusion of younger voters galvanized by the Sanders campaign, the ugly truth of 2016 to this point is that the Democratic electorate appears dispirited and downsized. If you think this primary campaign has featured the gnawing of fingers and the rending of garments among the left-liberal contingent, just wait.

Turnout has been way down in three very different Democratic contests so far, relative to the Clinton-Obama campaign of 2008. Clinton’s operatives are correct when they say that Sanders’ strong numbers in hypothetical matchups with Republican opponents don’t tell us much. Her weak numbers in such matchups, on the other hand, tell us plenty. Most voters still know little about Sanders or the scale of his proposed “political revolution,” and we can only imagine the cans of Red-baiting rhetorical whoop-ass being prepared in the GOP kitchen. A fall campaign with Sanders as the Democratic nominee would be wildly unpredictable, and fraught with peril. A campaign with Clinton as the nominee is all too predictable, and not in a good way.

Maybe somebody is out there saying, “Gee, I wish I knew more about Hillary Clinton! If she ever figures out where she stands on the Trans-Pacific Partnership I’ll make up my mind!” But maybe not. As the Sanders campaign has reminded, Clinton has enduring high negatives as a candidate, among voters across the political spectrum. Much of that stems from her unique gender status and all the right-wing bile flung at her over the decades, but some of it reflects her ingrained and ineluctable Hillary-ness, the quality that leads to “That’s what they offered me” and “Every other candidate in this race has given speeches to private groups” and dozens of other refusals to be pinned down on anything ever.

When you consider how things looked right after New Hampshire, the Clinton team’s wishes have come true: Her irritating gadfly opponent is suddenly perceived as being on the ropes, and she is positioned to run as the voice of reason against a wacko billionaire with an incoherent agenda and no discernible ideology. But this has not been a year for the voice of reason, has it, Gov. Bush? It’s the year when America cranked itself to 11 on WTF and “oh no, you didn’t” and “be careful what you wish for.” There is one 2016 candidate who has sparked widespread enthusiasm among ordinary people and who has pulled disgruntled nonvoters off the couch in impressive numbers, and his name does not start with H or B. It’s the joke candidate who has punked the whole country, that guy from reality TV who’s wearing an Al Pacino mask under a Voldemort mask under a Mussolini mask.

We should pause for a moment to recognize that all the Sanders obituaries may be premature and that the political narrative promulgated by the mainstream media is idiotic, not to mention that our method of picking a president is laughably flawed. It’s stupid to claim that the Nevada result — a margin of a few thousand votes in a low-turnout caucus state — has decided anything, or that it comes anywhere near resolving the cultural and ideological (and now generational) conflict within the leftward quadrant of the American electorate.

Ascribing immense importance to one ambiguous result reflects the “horse-race” problem in American politics in its most extreme form. Election campaigns are understood as mystical, tidal phenomena driven by superstition, perceived momentum and empty symbolism. Six or eight weeks ago, if Lucifer himself had offered Sanders’ strategists a 5-point defeat in a Western purple state with a large nonwhite population, Tad Devine would have signed away his grandkids on the dotted line. Now the Nevada loss is a disabling setback that left Bernie doing sputtering spin control on the Sunday talk shows.

But here’s the thing: American electoral politics is primarily symbolic psychodrama, and has little to do with “issues” or policy in any material form. It’s legitimate to wish it were otherwise, but it doesn’t help to shoot the messenger. Blathering articles in the New York Times about Clinton’s insurmountable delegate lead — at a moment when she and Sanders have exactly the same number of pledged delegates, and he has received more votes from actual humans — may be transparently propagandistic, on a level their authors and editors are incapable of perceiving. (Readers noticed! Which was invigorating.) But mainstream media groupthink is only one aspect of the problem, and reflects an underlying shared understanding of what politics is and how leaders are chosen that for better or worse has proven out in practice many times over.

Richard Nixon sweated on TV. Michael Dukakis looked silly in a tank helmet and set black killers free. George H.W. Bush had never seen a supermarket scanner before (untrue), while Bill Clinton wore shades and played the saxophone (atrociously). Howard Dean was a screaming lunatic; John Kerry was “electable” until he became too French and too cowardly. A guy born into one of the Northeast Corridor’s most elite families and educated at prep school, Yale and Harvard became a companionable West Texas rancher, ready to crack open a non-alcoholic beer and set awhile. Let’s leave the skillful but enigmatic messaging around the current occupant of the White House — who was briefly my classmate at Columbia, where he wore white slacks and a Members Only jacket and sat by himself during poli-sci lectures — for another occasion.

Way back into American political history, long before Lee Atwater or “Morning in America” or Pat Buchanan’s Southern strategy, elections have been about who tells a better story about themselves and the country. Here’s what I noticed about the Nevada caucuses, even more than the result: Both Democratic narratives are in big trouble. Bernie Sanders’ only realistic shot at winning the nomination lay in an Obama-like snowball effect, in which a series of surprising victories would create the sense that he stood at the head of an unstoppable social movement, while Hillary Clinton once again stood on the wrong side of the Democratic electorate and the wrong side of history.

That does not seem to have worked. Instead, Clinton won her first clear victory of the campaign in a state her team thought she might lose, or thought might end in an Iowa-style stalemate. But instead of crowing about superior organization and coalition building and so on (as they had every right to do), Clinton supporters on social media immediately went after the plausible-seeming polling data that suggested Sanders had won a majority of the Latino vote in Nevada. I offer no argument about who’s right and who’s wrong here, or about the viability of "entrance polling." I don’t think that’s the important part. That fact, if it was a fact, was dangerous because it threatened to undermine the moral legitimacy of Hillary Clinton’s 2016 narrative.

Once it became clear that moderation, pragmatism and experience were not big selling points in 2016, Clinton has positioned herself as the decaf Bernie, who largely agrees with his agenda and can bring some of its less ambitious proposals to fruition. In essence she has capitulated across the board on ideology and issues, and even on labeling. (I don't recall her embracing the term "progressive" eight years ago.) Her campaign largely rests on the idea that she has wide appeal to the demographic groups that make up the future of the Democratic electorate and the country, whereas Sanders’ revolutionary crusade speaks largely to privileged white folks. If Clinton’s victory in Nevada was built on low turnout and the support of older white voters, on the other hand, she is left with no story at all, facing a likely fall opponent who has nothing but stories, and spins a new one every day.