Marco Rudy-o: After getting thumped in Nevada, Rubio is betting on Giuliani's losing strategy of 2008

Can Rubio withstand a series of defeats before turning it around in Florida? The Rudy Giuliani experience says "no" 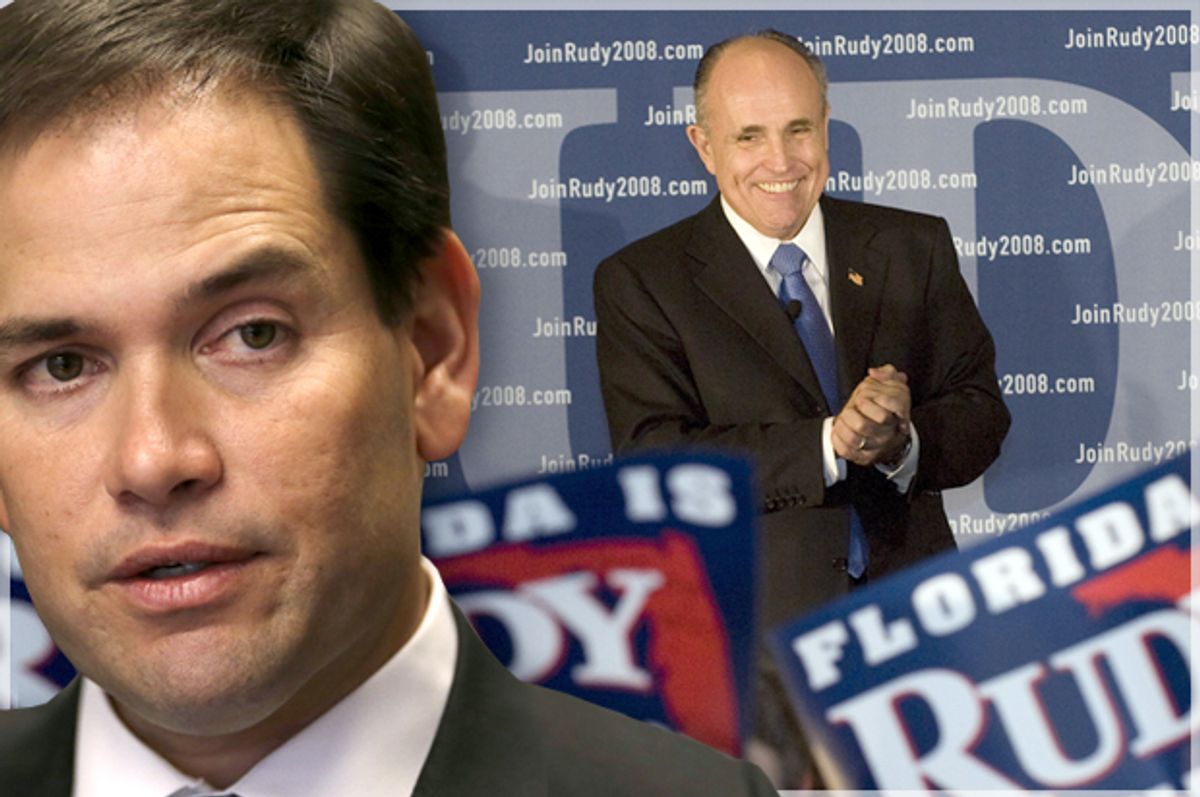 Tuesday’s Nevada Republican caucus was a key turning point in the Republican race. Donald Trump won and he won big, which is alarming in its own right and yet another sign that the race for the Republican nomination is quickly moving beyond the grasp of the anti-Trump party elites. An equally significant development was that, for the first time in this primary, Marco Rubio was unable to spin a relatively strong non-win as something approximating victory. He came out of South Carolina with slew of endorsements and picked up the support of key Nevada officials. Nevada was supposed to be one of his strongest states and his “firewall” in the event of disaster in the other early contests. But he got doubled up by Trump and barely squeaked out a second-place finish ahead of Ted Cruz. Unlike in Iowa and South Carolina, there was no triumphant “victory” speech, no “our time has come” posturing – the candidate left the state before the votes could be counted and had himself a good night’s sleep. And in the cold light of the morning after, all he could offer was excuses and promises that somehow things will get better.

“The majority of the Republican electorate, the majority of Republican voters in this country do not want Donald Trump to be the nominee,” Rubio said on Fox News, trusting that no one would turn that silly logic back on him and point out that a larger majority of Republicans have voted against Marco Rubio. “I respect Nevada very much, but last night, that process was just different from the rest of the country,” he explained on NBC, trying to pretend that the Nevada results were an aberration and not the continuation of a pattern. On “Fox & Friends,” Rubio plaintively insisted that “you don’t win the nomination by how many states you win.” This is true in the strictly literal sense, but there is an inescapable link between winning states and winning delegates to the nominating convention.

All this to say that Marco Rubio stands a very poor chance of winning the nomination if he keeps losing states to Donald Trump. He’s already blown through two strategies that envisioned victories in South Carolina and/or Nevada, so the question of Rubio’s first victory has taken on an air of critical urgency. At the moment, there are no states that readily present themselves as breakthrough territory for Rubio. The available polling for the clutch of states voting on March 1 shows Trump leading almost everywhere except Texas, where he’s in second behind Ted Cruz. So Rubio is looking beyond those states to the next big round of voting on March 15, and zeroing in his home state of Florida. “We’ll win in Florida,” he said on CBS News this morning.

So with the Iowa-New Hampshire-South Carolina momentum strategy in the toilet, and his Nevada “firewall” left a smoldering heap of embers, Rubio seems intent to ride out defeat after defeat after defeat until he finally captures a big win in Florida. It’s a modified version of the playbook Rudy Giuliani ran in 2008 when he sought the GOP presidential nod: absorb loss after loss, then use a Florida victory as a slingshot to the nomination. That strategy failed spectacularly for Giuliani because he was and is an unlikeable weirdo who didn’t add much to the national conversation beyond the rote repetition of “9/11.” More broadly, it was difficult for Giuliani to portray himself as a winner when his strategy leading into Florida resulted in an unbroken string of losses.

Rubio is obviously very different and much more gifted politician than Giuliani, but he faces similar problems by relying on one critical state to keep his candidacy alive. By losing as badly as he did in Nevada, he’s lost his manufactured persona as the winner who doesn’t need to win – already you’re seeing news analysts question whether his strategy is actually capable of succeeding. And if Trump romps through the March 1 states (and it seems like he very well may) then questions about Rubio’s viability will only multiply and harden, and he’ll struggle to explain why he can’t triumph anywhere despite having pretty much the entire party establishment in his corner. That would be a toxic dynamic for Rubio heading into Florida, where, according to the most recent polling, he’s trailing Donald Trump by a huge margin. New polling is sure to come out in the coming days and it will likely show some shifts in the race now that Rubio’s fellow Floridian Jeb Bush has dropped out, but he still has a big hill to climb against a frontrunner with an aura of unstoppable momentum.

As you might recall, that was Rubio’s precise strategy heading into South Carolina – lose every contest prior to the must-win state, but trust that his own “momentum” will carry him to victory over the guy who’s doing all the winning. That didn’t really pan out, but maybe he’ll have better luck this time. Actually, he has to have better luck in Florida – if Marco Rubio can’t beat Donald Trump on his own turf, then no amount of “win-by-losing” spin will save his candidacy.