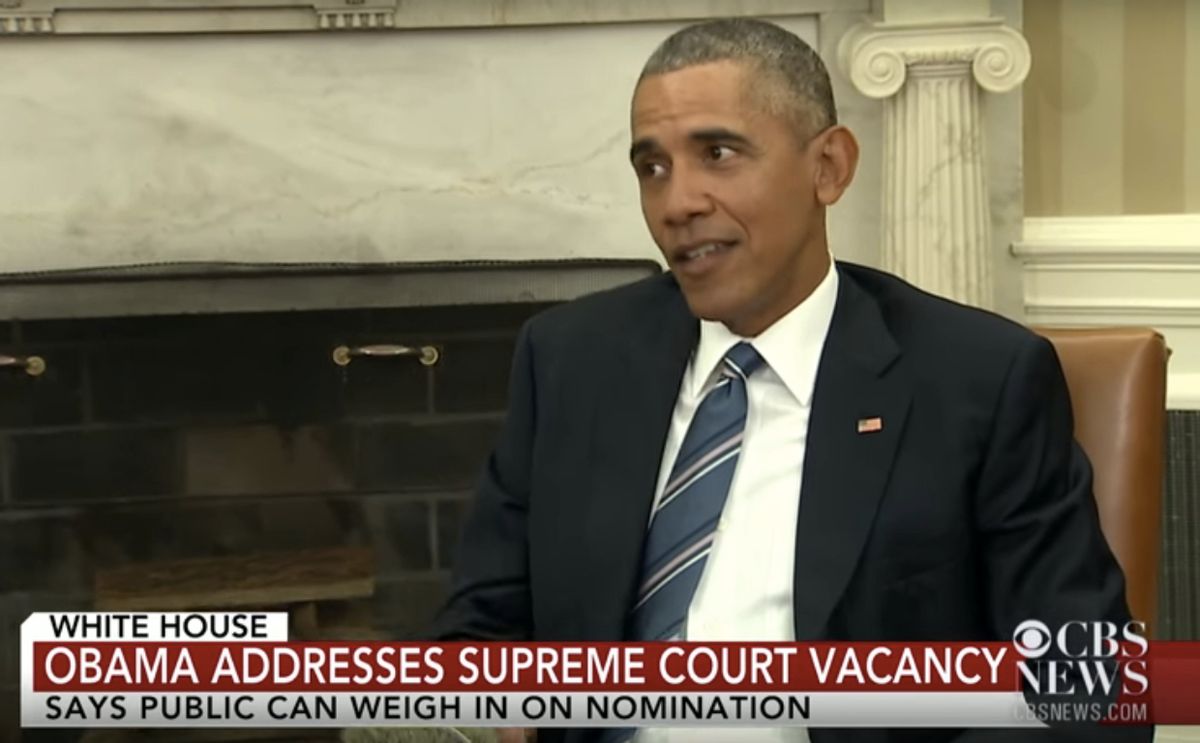 In nine minutes, President Obama artfully demolished every obstructionist argument laid forth by Republican Senators who have vowed to deny any potential successor to late Supreme Court Justice Antonin Scalia's seat on the bench even a customary hearing, let alone a vote of consent.

Warning that although he understands the obstructionist posture Republicans have staked out following the death of the Court's most conservative jurist, when such extreme positions as refusing -- for the first time in history -- to even grant a hearing to a President's Supreme Court nominee become the norm, "the credibility of the Court begins to diminish because it's viewed simply as an extension of our politics."

During remarks to reporters in the Oval Office after a meeting with King Abdullah II of Jordan on Wednesday, the President set aside an extended chuck of time to address the remarkable, signed pledge by all 11 GOP members of the Senate Judiciary committee to not even hold hearings to consider any potential Supreme Court nominee.

"I recognize the politics are hard for them because the easier thing to do is to give in to the most extreme voices within their party and stand pat and do nothing," he told reporters. "But that's not our job. Our job is to fulfill our constitutional duties."

"So my hope and expectation is that once there is an actual nominee, once this is no longer an abstraction, that those on the Judiciary Committee recognize that their job is to give this person a hearing, to show the courtesy of meeting with them," he continued. "They are then free to vote whatever their conscience dictates as to whether this person is qualified or not."

Wednesday afternoon, the Washington Post reported, according to an unnamed source, the White House is vetting Republican Nevada Governor Brian Sandoval. A pro-choice "moderate," who will force Republicans to prove their supposedly principled stand against an Obama nominee is not political.

“I think it will be very difficult for Mr. McConnell to explain, if the public concludes that this person is very well qualified, that the Senate should stand in the way simply for political reasons,” Obama explained at the White House today.

"Well see what happens," Obama said, predicting that "the situation will evolve over time."

"Let's see how the public responds to the nominee that we put forward ...I think it will be very difficult for Mr. McConnell to explain if the public concludes that this person is very well qualified, that the Senate should stand in the way simply for political reasons."

The President then went on to lay to waste Republicans' most widely cited excuses for rushing to abdicate their duties, point-by-point:

GOP obstructionist argument #1: But President Obama is a lame duck who doesn't deserve a third nominee

"There is an argument that the president shouldn't do this because he is a 'lame duck,'" Obama acknowledged on Wednesday. "The truth of the matter is that traditionally the term lame duck refers to the two or three months after an election has taken place in which a new president is about to be sworn in," he said somewhat incredulously.

"I've got a year to go. I don't think they would approve of me abdicating on my duties as commander-in-chief and to stop doing all the other work that I've got to do!"

“There’s not a lot of vigor when they defend the position," Obama pointed out, calling Republicans' demands for steadfast and unprecedented obstruction "sheepish."

GOP obstructionist argument #2: For 80 years, presidents have abstained from nominating during an election year

In that same vein, Republicans like Senate Judiciary Committee Chairman Chuck Grassley rushed out only hours after news of Justice Scalia's passing to falsely claim that "over the last 80 years to not confirm Supreme Court nominees during a presidential election year."

"The one thing I think is important to dispel," Obama started, "is any notion that somehow this is some well-established tradition or some constitutional principle that a president in his last year in office cannot fill a Supreme Court vacancy."

The President pointed to Justice Kennedy's confirmation to the Supreme Court during a presidential campaign year. Republicans "say 'well that's different' because he had been nominated in 1985 even if he was confirmed in 86," Obama acknowledged (confusing the date of Kennedy's confirmation by one year), but, "the notion that there is some two month period in which it all flips and everything shuts down, that is not a credible argument."

GOP obstructionist argument #3: Some Democratic senators once argued against a possible SCOTUS nomination in a president's final year

“First of all, we know senators say stuff all the time,” Obama said, alluding to recent Republican complaints that both Vice President Joe Biden and New York Democratic Senator Chuck Schumer once objected to the idea of a president naming a Supreme Court nominee in his final year in office.

“Second of all, these were comments [Biden in 1992] where there was no actual nomination. That’s not the same. It has no application to the actual situation that we have right now,” Obama argued.

Earlier Wednesday, Obama wrote in a post on Scotusblog that he was seeking a nominee with “life experience earned outside the classroom and the courtroom” but one who would be “eminently qualified.”  Without offering any specifics on his shortlist of candidates, Obama wrote that his pick will “recognizes the limits of the judiciary’s role,” without an ideological agenda.

“There will be cases in which a judge’s analysis necessarily will be shaped by his or her own perspective, ethics, and judgment,” Obama wrote, adding that he was seeking someone with “a keen understanding that justice is not about abstract legal theory, nor some footnote in a dusty casebook.”

“It’s the kind of life experience earned outside the classroom and the courtroom; experience that suggests he or she views the law not only as an intellectual exercise, but also grasps the way it affects the daily reality of people’s lives in a big, complicated democracy, and in rapidly changing times.”

Watch President Obama take on the Republicans' most ridiculous arguments in favor of obstruction below: