Chris Rock is ready: The Oscar host's historic opportunity is the moment his entire career has led toward 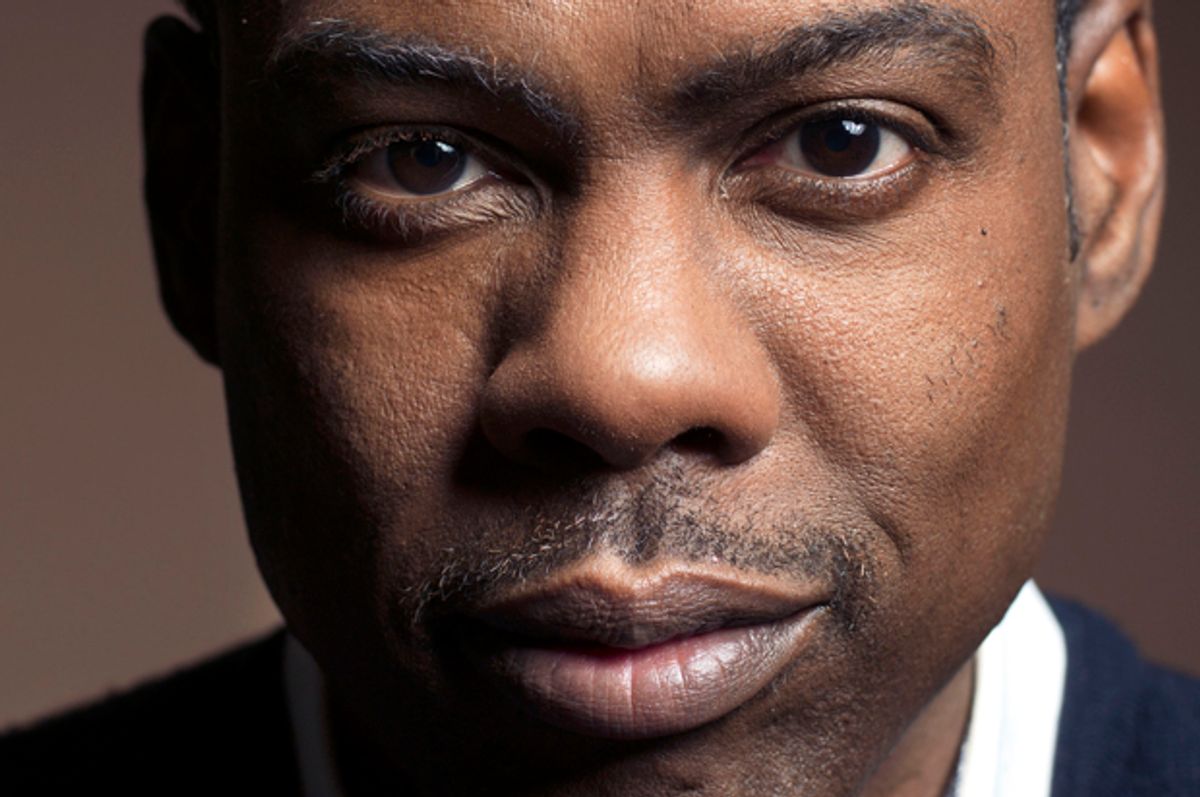 At some point in the murky prehistoric era otherwise known as Bill Clinton’s second term, I found myself in the living room of a modest apartment in Fort Worth, Texas, with a couple of self-described gun nuts named Darrell and Bo. We were sitting around drinking the beer I had purchased while they showed me their alarming array of weapons — there were at least two dozen firearms in that apartment — and discussed their African-American neighbors, using an epithet I am not allowed to print. Sensing my discomfort, Bo and Darrell hastened to assure me they were not bigots. That word did not apply to all black people, only some of them. And they were big fans of Chris Rock, who drew the same distinction in one of his infamous ‘90s stand-up routines. (If you're not familiar with this bit from his 1996 special "Bring the Pain," you can watch it here.)

I think about those guys a lot in the context of 2016, when Donald Trump is about to become the Republican presidential nominee and Chris Rock will host an Oscar ceremony that features an all-white list of acting nominees for the second year running. At the time, Bo and Darrell struck me as likable losers with good intentions and a delusional worldview, and that’s what I said in the article I wrote about them for a now-defunct men’s magazine. They were good sports about it: Darrell called to tell me the only thing he didn’t like about the article was that I said his TV was too big. In my head, Darrell and Bo serve as a reminder that the “Trump demographic” is more complicated than it appears from a distance.

So too is Chris Rock, who finds himself at the center of a major pop-culture controversy and the center of America’s overheated racial discourse, all in the same moment. Sunday night’s Oscar telecast is arguably the moment that Rock’s entire career has pointed toward — and if that feels like putting way too much pressure on one guy, I’m sure I can’t compete with the pressure Rock is putting on himself. As he well knows, every crack he makes will immediately be dissected for possible meanings. Every laugh line will be evaluated for signs of Hollywood’s collective guilt; every dud and every groan will be perused for possible racist defiance.

At this point, if Rock doesn’t open the show with a slam-bang musical number, featuring Bernie Sanders, Donald Trump and Bill Cosby in KKK robes, half of Twitter will announce that he sucks. (And if he does, the other half will profess undying outrage.) But he’s the right man for the job; I honestly can’t think of anyone who is better positioned to tackle the #OscarsSoWhite moment with humor and anger and just a little cerebral detachment. It isn’t entirely irrelevant that Bo and Darrell in Fort Worth were such big fans, although good middle-class progressives of all races will no doubt be distressed that those guys took Rock’s comedy as implicit permission to use the N-word and as cover for casual racism.

Rock is conspicuously not interested in placating middle-class progressives of all races, which is one of the big reasons why he’s perfectly situated to call out the Hollywood establishment for its deeply ingrained racial blindness and denial. Unlike Spike Lee or Danny Glover or even Denzel Washington, he’s not perceived as a scold or a preacher or an “activist.” He’s a whole lot funnier than any of those guys, and he might well be the smartest and most culturally literate person who will appear on the Dolby Theatre stage on Sunday. (In this conversation with Frank Rich in New York magazine, he cracks deep film-nerd jokes about the “difficult” Woody Allen movies of the ‘80s.)

Even in the less sensitized cultural climate of the ‘90s, lots of people found Rock’s exaggerated tirade invoking the forbidden word as a sub-category of black people profoundly offensive. It was offensive, and that was pretty much the point. (Rock has said he wouldn’t deliver that material the same way today.) Like much of the most effective comedy, it was deliberate thought-crime, designed to make all possible audience members uncomfortable. That applies to Bo and Darrell as well, in my estimation. It’s too simplistic to say, “Oh, he gave racists permission to say racist stuff and that’s terrible.” He did no such thing. Chris Rock is not responsible for my gun-totin’ pals’ attitudes or utterances, which are going to come out in some other form, by the way, if we deliver stern lectures to the Bos and Darrells of the world about how such things are unsayable and unthinkable. (See also: Trump, Donald, 2016 campaign of.)

In that Frank Rich conversation from 2014, Rock imagines doing a TV special on race in which he would interview only white people. “When we talk about race relations in America or racial progress,” he says, “it’s all nonsense. There are no race relations. White people were crazy. Now they’re not as crazy … The advantage that my children have is that my children are encountering the nicest white people that America has ever produced.” Whether or not you agree with that, it speaks to the analytical perspective beneath Rock’s comic persona. He is in no sense trying to be a non-racial or “post-racial” entertainer (as Bill Cosby arguably did in his heyday). He’s a black man with deep roots in the African-American comedy tradition, who has spent much of his professional life in rooms full of white people without code-switching or “acting white.”

So yeah, Bo and Darrell on their imitation leather sofa in 1998 were way too eager to embrace Rock’s problematic racial dichotomy, and to use it as license to say things they probably shouldn’t have said in front of a bespectacled left-wing journalist from New York City. Rock might say that it’s better for those guys to say that stuff out loud than to bottle it up, and I would say that beneath Bo and Darrell’s eagerness I could feel a nervous, electrical buzz of excitement and unease: Why is this liberal black guy who went to college and has a lot of money saying this stuff? That’s the Chris Rock effect, and at its best it works on everyone.

Let’s be direct about the obvious fact that I am writing about Chris Rock from a middle-class white person’s perspective (since that’s the only one I have available) and that I do not propose to speak for the wide range of heterogeneous black opinions about Rock’s career and comic persona. What I observed in that living room was that Rock had succeeded in reaching two working-class white guys on the downscale suburban fringe of Fort Worth, without condescension or falsehood, in a way I could not easily manage. Essentially he told Bo and Darrell and a bunch of other white folks that, yeah, black people sometimes talk this way among themselves, and he wasn’t going to lie to them about it or treat them like bewildered children, because he wasn’t scared of them. Because white people are not quite as crazy as they used to be. What they did with that information and whether they took it in a constructive or destructive direction — that was on them.

No doubt it’s a symptom of Hollywood’s race problem that Chris Rock possesses unique status in the entertainment industry. Everyone who will be in that room on Sunday night respects him, and most of them like him. They know he could have cashed out in bad movies and TV sitcoms years ago, and has consistently pursued a more challenging and less predictable path as an actor, producer and director. They know how smart he is and how sharply tuned his cultural and political radar is. They know they have to give the appearance of listening to him for political reasons, but they also know that he will be funny and will never retreat to clichés or platitudes and will tell them the truth as he sees it. It’s an immense and profoundly unfair responsibility, but the whole world will be watching and no one could possibly be better prepared.

Fast forward a decade or so from Fort Worth, and I found myself on a different sofa, talking to Chris Rock at the 2009 Sundance Film Festival. He was there with his HBO documentary “Good Hair,” and I tried to make a joke about that: Here we were at a ski resort in Utah, the whitest place imaginable. What a perfect spot for a movie about African-American hair!

Rock didn’t even crack a smile. Actually, it kind of was perfect, he said. People from Salt Lake City’s modest black community were coming up by the busload to see the film, he told me; it was more color than Sundance had seen in years. That was his primary audience and his main responsibility. If he could make African-Americans feel that the movie was authentic and truthful to their experience, and also get some Mormon lady in Utah to engage with this subject and laugh about it and leave knowing things she didn’t know before … He shrugged: “Then I’ve done the job.” Rock’s job on Sunday night is bigger, and the task of addressing multiple audiences without dissimulation -- the studio heads and the academy and Bo and Darrell and people of color around the world with Oscar-flavored dreams -- is fraught with danger. He’s ready.