Ashley Williams donated $500 to deliver a message directly to Clinton 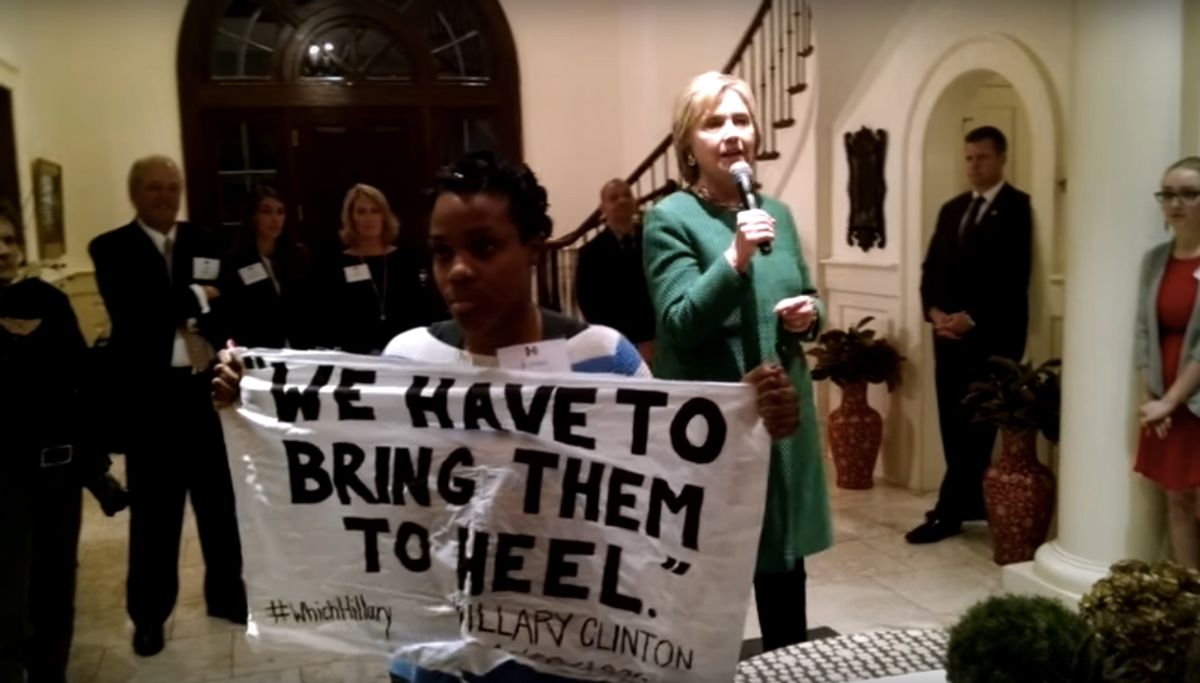 At a private Charleston, South Carolina, residence, surrounded by around 100 supporters, Hillary Clinton was interrupted by a Black Lives Matter activist who unfurled a sign quoting the former first lady on so-called "Superpredators," the widely prevailing 1990s junk-science criminology that the usually African-American juvenile offenders of the time were irredeemable and would undoubtedly grow to terrorize communities.

"I'm not a Superpredator, Hillary Clinton," the young Black Lives Matter activist said Wednesday night, holding a sign that read: "We have to bring them to heel" - Hillary Clinton. The quote is from a January 25, 1996, speech by Clinton during which she promoted the concept of "community policing" in order to combat the growth of so-called "Superpredators."

“They are not just gangs of kids anymore,” Clinton said in Keene, New Hampshire. “They are often the kinds of kids that are called ‘super-predators.’ No conscience, no empathy. We can talk about why they ended up that way, but first we have to bring them to heel":

Clinton, who was in the middle of delivering remarks on the nearby Walter Scott shooting and South Carolina's early adoption of body cameras for police officers, eventually noticed the activist and turned to read her own quote on the sign. Without indicating if she recognized her words, Clinton read them aloud before insisting that "we'll talk about it." Clinton has recently attempted to distance herself from her advocacy of her husband's tough on crime policies after increased scrutiny and criticism.

"Can you apologize to black people for mass incarceration?" the activist asked Clinton.

"Can I talk and then maybe you can listen to what I say," Clinton replied, as the mostly white crowd began hissing at the heckler.

"My very first speech back in April was about criminal justice reform," Clinton explained to the audience.

But "you called black kids Superpredators," the activist shot back.

"Do you want to hear the facts or do you just want to talk," a clearly frustrated Clinton asked, as supporters yelled "you're being rude" to the young woman.

"I know that you called black people Superpredators in 1994 ... please explain your record."

"You owe black people an apology," the activist demanded before being escorted out by Secret Service.

"You know what?" Clinton said, leaning closer to the woman as she was being pushed out. "Nobody has ever asked me before. You are the first person to ask me and I am happy to address it."

"OK, back to the issues," Clinton said to shouts of "thank you" from the crowd as the young woman was finally removed from the residence.

In an interview with the Huffington Post afterwards, Black Lives Matter activist Ashley Williams revealed that she had donated $500 to the Clinton campaign and strategically planted herself near the front of the crowd to make her demonstration.

"I wanted to bring her to confront her own words."

Williams said she and another activist demonstrated the Clinton event "because we wanted to make sure that black people are paying attention to her record, and we want to know what Hillary we are getting."