Judd Apatow believes in Andy Dick: The vocal critic of Bill Cosby has nothing but "Love" for his old friend Andy

Even with a history of abusive behavior arrests, many of a sexual nature, Dick gets redemption in Apatow's new show 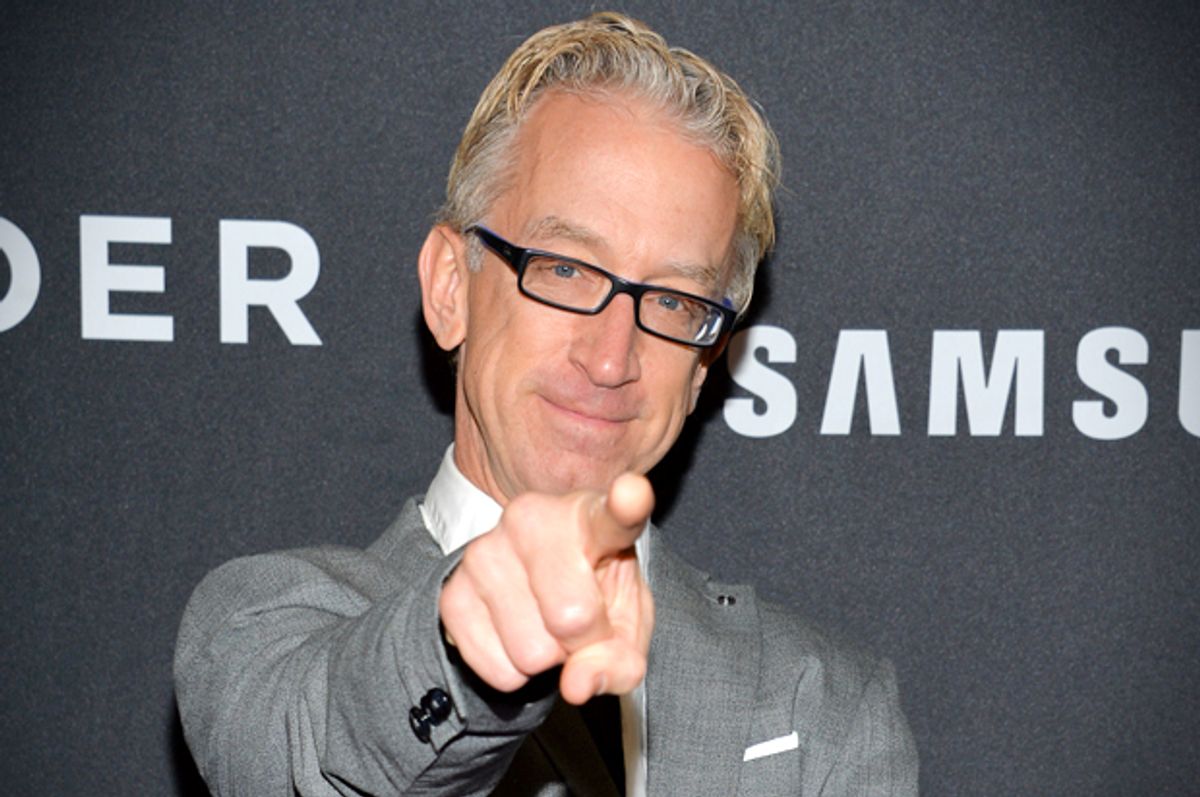 For over a year now, Judd Apatow has been outspoken in his disgust for alleged serial sex offender Bill Cosby. So why, as Caroline Framke asks this week in Vox, did he cast Andy Dick — an actor with a long line of run-ins with the law for sexual misbehavior — in his new Netflix series "Love?"

Apatow's credentials on the subject of Bill Cosby's awfulness are impressive. In December of 2014, he tweeted up a storm on his feelings on the comic, publicly calling out venues that were at that point still welcoming Cosby, and adding, "I am pretty sure I have had sex with less people than he raped." And he asked, "I always wonder why some people try so hard to not believe women who have been assaulted. What is the root of that?" Last summer, while promoting "Trainwreck," he mocked Cosby on "The Tonight Show," and told "Today," "I just kept noticing that no one else was saying that this was a bad thing. It's incredibly sad. It's one of the most tragic things that's happened in our business, and I think we do have to stand up for the women and say that we believe you." He echoed the sentiment in December, when he accepted a Spirit of Liberty Award from People for the American Way, saying, "We have to stand up for women. Because it’s not about Bill Cosby, it’s about nothing except when women stand up and say they have been attacked, you have to listen to them and believe them."

Yet as Framke points out, this is the same guy who put Dick, playing himself, as the centerpiece of an episode in "Love." Apatow co-created and executive produces the show, which debuted last week, and co-wrote four of the first season's episodes. Maybe it was nostalgia. He has a history with the actor that goes back more than two decades, when Apatow was a co-creator and writer on the early nineties "Ben Stiller Show" and Dick was a cast member. In 1996, Apatow was a producer on "The Cable Guy," and Dick had a small supporting role. More than a decade later, Dick had a cameo in Apatow's breakout smash "Knocked Up." And now, nine years later, here they are, together again.

But a lot has happened since the two men were aspiring young comics. Dick, for example, has had a multitude of arrests and public embarrassments, many of which are of a sexual nature. In 2004, he was arrested "on suspicion of indecent exposure" over a mooning incident at a McDonalds. In 2007, he was literally dragged off "The Jimmy Kimmel Show" by the host and security after he wouldn't stop groping Ivanka Trump. In 2008 he was arrested after police said he "grabbed and fondled the breast of a 17-year-old girl before pulling her top down." He pleaded guilty to misdemeanor battery and marijuana possession. Two years later he was arrested in Virginia on sexual abuse charges after allegedly "grabbing a bouncer's crotch and groping and kissing a male patron." In 2011, he was accused of exposing himself and rubbing his genitals on a male audience member's face during a comedy set in a Dallas club.

In the episode of "Love" entitled "Andy," Dick plays himself as the shambling, slurring mess that has become his public persona over the past several years. "Every bad choice I've made: drinking," he ruefully says, recounting his misadventures. "Everything I've lost: drinking. I got that Vince Vaughn movie. I was right there… And then I blacked out. I know it wasn't good. I probably got gropey." It's a sad moment of defeated self-recognition. But in real life and fiction, substance abuse isn't supposed to be an excuse for "gropey" — also known as abusive — behavior.

An unfortunate by product of speaking out on any subject, attempting to make any kind of useful gesture, is that the moment you do, everything else you're not doing is up for scrutiny. If you're outraged over the killing of a beautiful animal, it means you don't care about Syrian refugees. If you give a quarter of a million dollars to a singer embroiled in a legal dispute you're just furthering your brand, and that's not even a lot of money for a celebrity. Likewise, just because Judd Apatow has been outspoken about Bill Cosby — whose alleged behavior is undoubtedly very different from Dick's — he is not obliged to drop his troubled friend. But it certainly does the raise the question of the selectivity of his statement last year that "We all need to support the victims and tell them, 'We care about you and we believe in you."