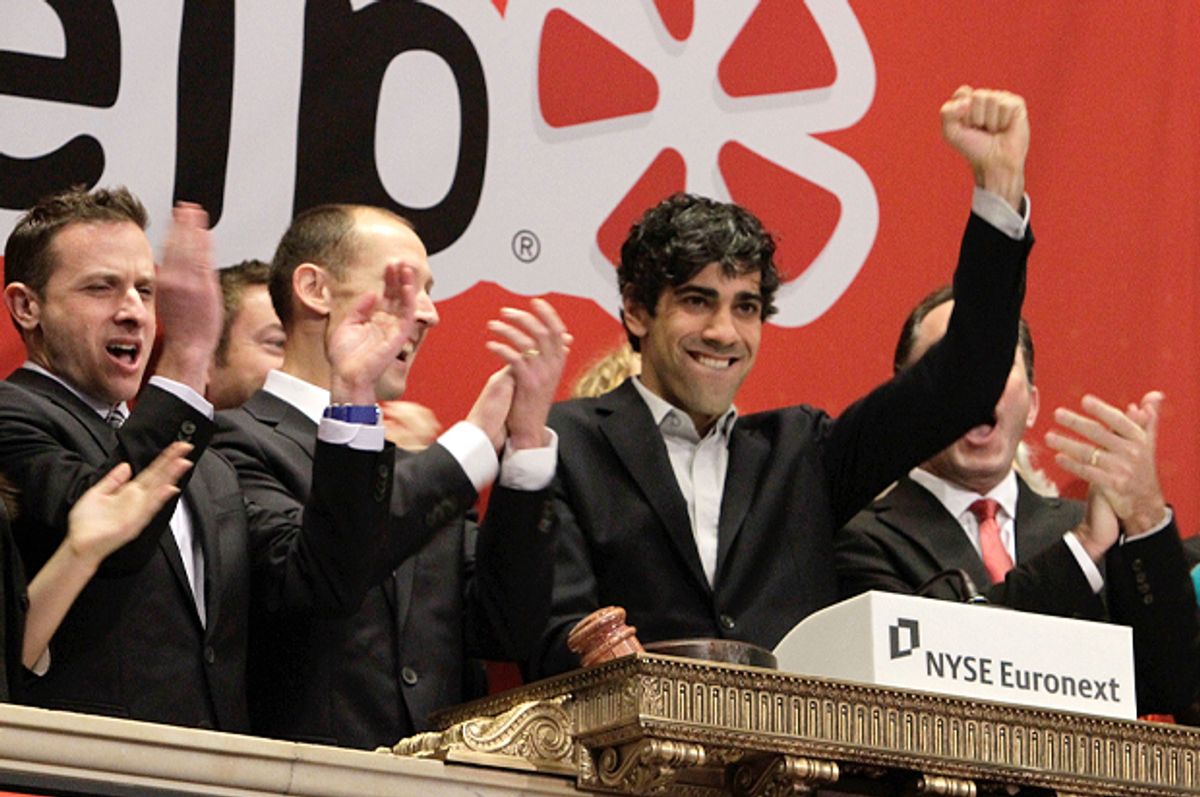 Last Friday, a 25-year-old woman named Talia Jane wrote an open letter to her employer, Yelp CEO Jeremy Stoppelman. In it, she wrote about how Yelp wasn't paying her enough money to live in the Bay Area or to afford groceries. (She said she made $8.15 an hour after taxes.) She also wrote that many of her co-workers found themselves in similar positions. She appealed to Stoppelman to remedy this situation.

It took just a couple of hours after Jane posted the letter to Medium for Yelp to fire her. The backlash to her piece was equally quick. The phrase "entitled millennial" began circulating. Several of her fellow millennials loudly declared that they were better than her.

"The reason why you were/are in the predicament you are now is because you put yourself there," one respondent wrote. "Turning this girl’s inability to work for what she wants into a conversation about poverty...and wage issues, it’s utter b-------," a writer named Stefanie Williams opined in a widely circulated post on Business Insider.

Jane was also forced to account for social media posts showing her eating seemingly nice food. Her critics pointed to the posts with Watergate-level intensity—see? She's lying!—and recounted their own hardships and time spent taking multiple jobs to survive as evidence of her supposed laziness.

On one level, it's easy to adopt the finger-wagging pose of Jane's critics. People should be sensible with their money, people shouldn't take too many risks if they don't know what the future's going to hold, people should be aware of what they're getting into—we've all either heard this a million times or been guilty of telling someone this at least once or twice in our lives. The world is full of people making difficult situations work for themselves.

Yet to stay in that zone is to miss the point entirely, and to succumb to the vicious cycles that define our economic system. Can you go through Jane's post and pick out things that seem a little fuzzy? Can you sneer at her for not having the fortitude to stick out the hard times like you did? Sure, if you want to. Your time would be better spent wondering why it is that a huge, multibillion-dollar company like Yelp isn't paying its workers enough money to make it in the area where it's based. It would be better spent wondering why, exactly, the Bay Area has become such an impossible place to make ends meet for so many people. Or why our instinct is so often to go after the people raising concerns rather than the powerful companies making their lives hell.

Instead, people fall into the trap that capitalism wants them to fall into. Solidarity is for chumps. Idealism is for idiots. The system is the system. Your misery-inducing efforts to navigate that system, to forgo the pleasurable things in life in order to keep going, are a point of pride, not a symbol of the system's inherent injustices. If someone has the nerve to point out that the system is oppressive and unfair, they're just being entitled, or naive, or lazy. The notion that it doesn't have to be this way is laughed out of the room.

But you know what? It doesn't actually have to be that way. There's no law that says that Yelp can't pay its employees a living wage. There's no law that says that the implied trade-off that governs so much of our lives—that you should endure years of torment in the hopes that you can get a promotion or a raise—is the way the world should work. What if we contemplated something different? What if we embraced the insane idea that people deserve a good wage, decent housing and, yes, even the ability to have good food every now and then no matter how young they are or how recently they got into the workforce? Why is it so outlandish to posit the theory that wanting to be more than a cog in a machine shouldn't be so difficult, or that you shouldn't have to work more than one full-time job to support yourself?

Jane is not the first person to speak up in this way and feel the intensity of the punishment that modern capitalism dishes out to those who try to advocate for a better way of living, and she won't be the last. She belongs to a generation that's paying the price for the rampant oligarchical greed of the past few decades. It would be nice if other members of that generation decided to stick together a little more instead of tearing each other apart. If they did, they might be surprised at the power that they have.