Rubio might want to tell Mitt to stand back: Why a Romney endorsement could be the death knell to Rubio's fading campaign 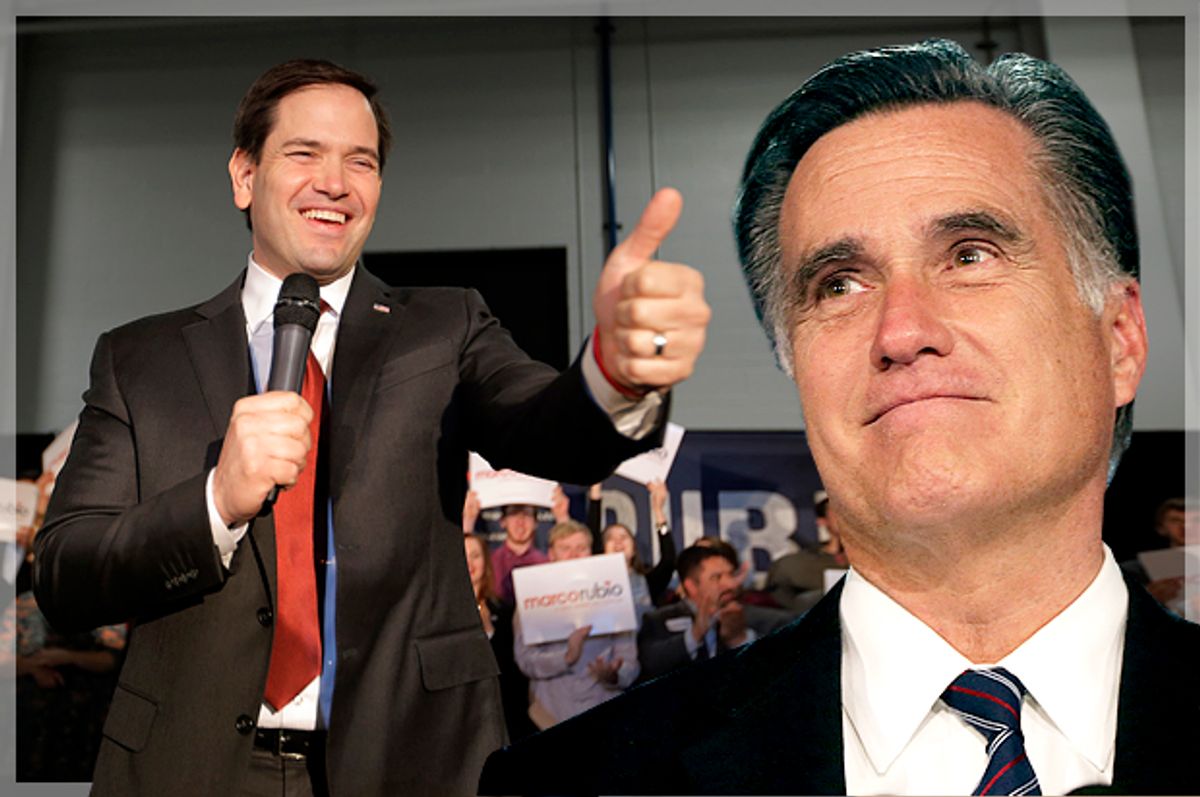 There’s a firming consensus among elite opinion-makers that, in the aftermath of Donald Trump’s crushing victory in Nevada, Republican Party leaders must take quick and drastic action to thwart their party’s 2016 front-runner. There’s no agreement as to what that action should look like, but the calls for someone to do something are coming hot and thick. “If Mr. Trump is to be stopped,” warns the Washington Post editorial board, “now is the time for leaders of conscience to say they will not and cannot support him and to do what they can to stop him.”

Actually, the time for that was months ago, before Trump consolidated his base of support and before he started posting embarrassingly lopsided victories in the early primary states. But nobody did that because everyone thought Trump was a joke and that he’d quail before the obvious might of Scott Walker and Jeb Bush. Screaming “do something” now suggests that Republican leaders actually have something they can do other than try and prop up an anti-Trump candidate, which is what they’re currently trying to accomplish with Marco Rubio.

That brings us to Willard Mitt “Mitt” Romney. The 2012 Republican nominee has yet to endorse anyone, even as the party finds itself in desperate need of a consensus Trump alternative as the GOP race moves to the critical multi-state contests in March. Instead he’s being coy and evasive even as he boosts his own visibility and involvement in 2016 politics. Romney was asked whom he would endorse at an event in Massachusetts this week, and here’s what he said, as reported by the Washington Post:

“The answer is, I’m not going to tell you,” Romney said, drawing laughs. “I am very involved and will be increasingly involved. I’m involved now behind the scenes with a number of people who are running for president. And I did not anticipate endorsing but I probably will at some point. I don’t know who yet.”

Come on, Mitt. We all know where this is going. The only two people he could possibly be working “behind the scenes” with are Rubio and John Kasich, and given that Kasich is running on borrowed time, it seems pretty likely that Rubio is Romney’s pony. But he’s holding off, which, if you subscribe to the “winnowing” theory of the Republican race, is to Rubio’s detriment. The value of a Romney endorsement, to the winnower’s thinking, is that it sends a powerful signal to the Republican electorate to quit messing around with go-nowhere candidates like Kasich and consolidate behind Rubio, who can get to the business of finishing off Ted Cruz and then dominate a one-on-one fight with Trump. Rubio’s people make no secret of their desire to poach Kasich’s supporters before the March primaries, and Romney’s endorsement could, in theory, help precipitate that.

But that’s just a theory, and Rubio is in a uniquely precarious position in which a Romney endorsement might actually cause him trouble. If there were no question at this point about Rubio’s path to the nomination, the endorsement of an “elder statesman” like Romney would be seen as a validation of his electoral triumph and a sign that the party had affirmatively made its choice. But Rubio has not earned the nomination. He hasn’t put himself in a position where it’s assumed that he’ll get the nomination. Every time he’s gone up against Donald Trump in a primary or caucus, he’s earned fewer votes and, in the last three contests, has been beaten badly. In that context, a Romney endorsement looks less like a validation and more like a confirmation that Rubio can’t do this on his own. Rather than being perceived as having won the establishment to his banner as the most qualified candidate, it’ll look like the establishment is bailing him out.

Maybe it looks like that already, given how many former Jeb Bush backers have migrated to Rubio and the number of congressmen and senators who have backed his campaign. But none of those people have the national profile that Romney does, and at this point it seems like a nod from Mitt would erase any doubt about Rubio’s weakness as a candidate.

Rather than endorse Rubio, Romney’s offering his services as attack dog and pressing Donald Trump to release his tax returns, suggesting that they contain a “bombshell.” Anyone who remembers the 2012 election will understand immediately how wildly hypocritical and deeply ironic it is for Mitt Romney of all people to go down that road. And he’s not the most effective anti-Trump voice given how Romney spent months courting Trump in 2012 before ultimately securing his endorsement with an awkward press event in Nevada. But Romney clearly believes at this point that he can help Rubio more by getting into a fight with Trump than by giving the Rubio campaign the Mitt stamp of approval, and he’s probably right.