Ted Cruz is the GOP's loneliest a-hole: His campaign is sinking because literally nobody likes him

Once seen as the strongest challenger to Donald Trump, Cruz now finds himself fighting for second for one reason 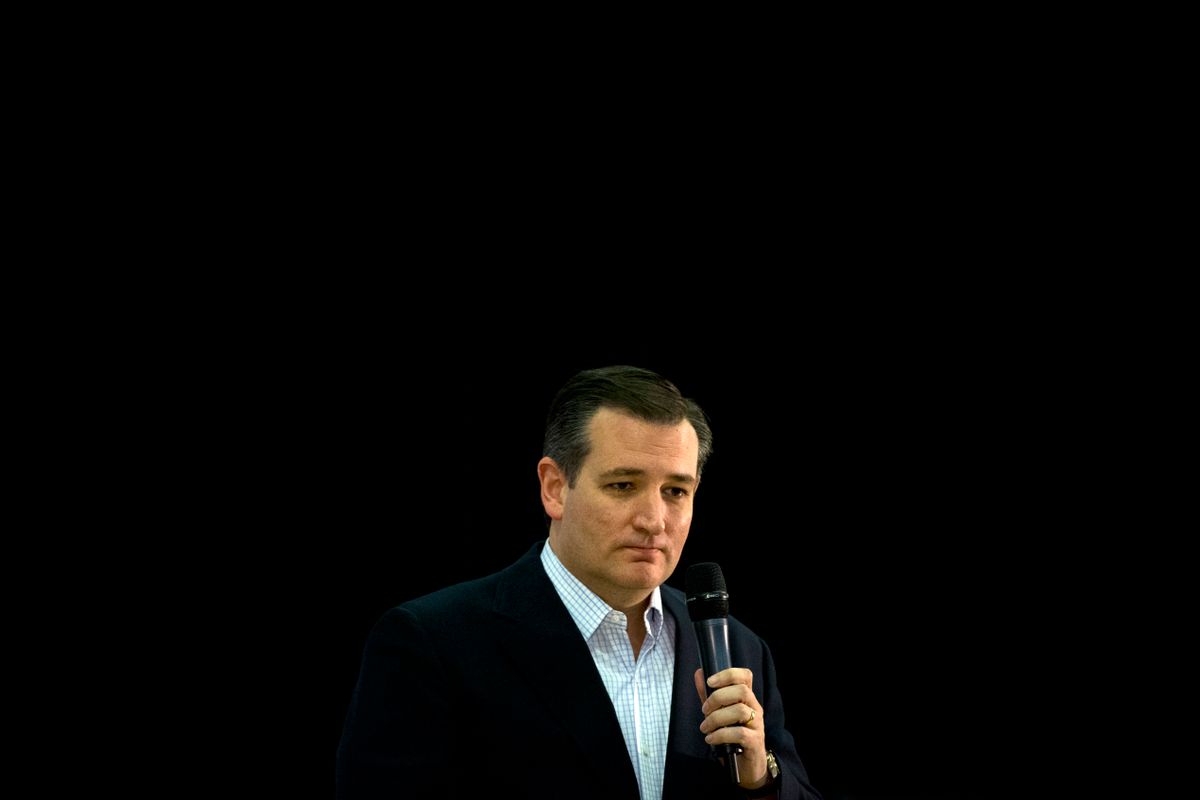 For a guy whose presidency is divinely ordained, Ted Cruz seems rattled.

Of all the GOP candidates, he’s the guy you would have least expected to lose his cool. We’ve seen how easy it is to throw Marco Rubio off his game, though presumably his programmers could solve that problem with the right firmware update. Donald Trump has thin skin, though he covers it for his fans by lashing out and throwing around schoolyard insults until they all think he’s the strongest silverback in the herd.

By contrast, Cruz has so often seemed serene, so smug and convinced that occupying the White House is his destiny. You could practically see his desire for the presidency leaking from his pores. He seemed to have done his homework on how to run a campaign, building a solid ground game in the states. His town hall in New Hampshire, for example, was by far the most polished presentation of all the GOP events I attended up there.

But in the last couple of weeks, that cool seems to have deserted him. Cruz’s opponents have pushed back on the amateur-hour schemes coming from his campaign enough that he has seen fit to apologize for some of them. (That loud whirring noise you’re hearing is Richard Nixon spinning in his grave at 1000 rpm.) Not that the objects of the apologies were particularly forgiving. Ben Carson, who was upset by the campaign’s infamous attempt to convince reporters he was dropping out after the Iowa caucus, spent half an hour in a broom closet with Cruz. He emerged to say that the two men would have to “agree to disagree…on accountability and culpability” for the feud that had roiled the two campaigns. This was as polite a way as it is possible for Carson to say, “Get a load of this asshole.” But make no mistake, that’s exactly what he was saying.

Then there was the case of Cruz’s now-former communications director, Rick Tyler. A couple of days after the closet summit, Cruz abruptly fired Tyler over a misleading video he had posted that appeared to show Marco Rubio scoffing at the validity of the Bible. Since questioning the religious faith of a political rival is something Republicans only find acceptable when said rival is a Democrat (see: Obama, Barack), the Cruz campaign found itself taking enough fire to require a high-level sacrifice. So they tossed Tyler overboard, but not before making him apologize directly to Rubio first.

The whole spectacle has Cruz’s supporters confused. Some of them are worried, telling reporters that the campaign’s reputation for lying and dirty tricks was starting to hurt him with the electorate. What these supporters are really saying is that the lying and dirty tricks are so ham-handed as to cause doubt about Cruz’s political skills and ability in the long run, but the effect – building a narrative of a struggling campaign – was the same.

Meanwhile, Steve Deace, an Iowa talk-radio host who all but has Cruz’s face tattooed on his back like a cut-rate Roger Stone, took the opposite tack. Deace derided the campaign for apologizing to Carson, telling his audience he would “eunuch himself” if Cruz didn’t go back to being the butt-kicking, unapologetic alpha male that earned him the talk-show host’s affections in the first place.

All of this comes about as Cruz seems to have hit his ceiling. His game plan to win the nomination has always been a weird and unlikely one, relying as it did on voters who probably don’t exist and a belief that he could bully the GOP into coming around on him. His trust in this plan showed a complete lack of the political acuity he showed in building his organization. He finds himself mired in battles for second place in every primary, fighting Rubio for whatever scraps of voters haven’t been hoovered up by the Trump juggernaut. The divine plan is not unfolding as it should, and Cruz is not adjusting to the setbacks.

The disarray points out what has always been Cruz’s Achilles heel, which is now coming back to haunt him: Virtually everyone who gets to know him loathes him with the fiery intensity of a thousand supernovas. Remember the clip of him just after the end of the seventh Republican debate in January, wandering the stage looking for someone to talk to as all the other candidates turned their backs and ignored him? That was a visual representation of Cruz’s relationship to the entire GOP. Even a party with no power center anymore, a party that is little more than a collection of warring fiefdoms, seems united in one way -- which is that none of them wants a thing to do with Cruz. He’s learning quickly that it might have helped to make at least one or two influential friends in the national party, instead of spending the last few years trashing it to anyone who would listen.

None of his opponents has even gone on record to deny Cruz is the Zodiac Killer. You’d think that would be a lay-up, but apparently not.

So this is the state of Ted Cruz less than a week before Super Tuesday. Hated by his party, incapable of getting anyone to like him. The GOP establishment has even made it clear that as much as they hate Trump, they would still prefer him as the party nominee. That alone must be galling to Ted Cruz, who has spent his entire life planning and plotting and gearing up for this run, only to see it swamped by a walking billionaire troll doll who has made a mockery of all the voter-fooling conservative arguments he was counting on to carry the day for him. You might even feel a tinge of sympathy for him, if he wasn’t such a galactically shitty jerk.