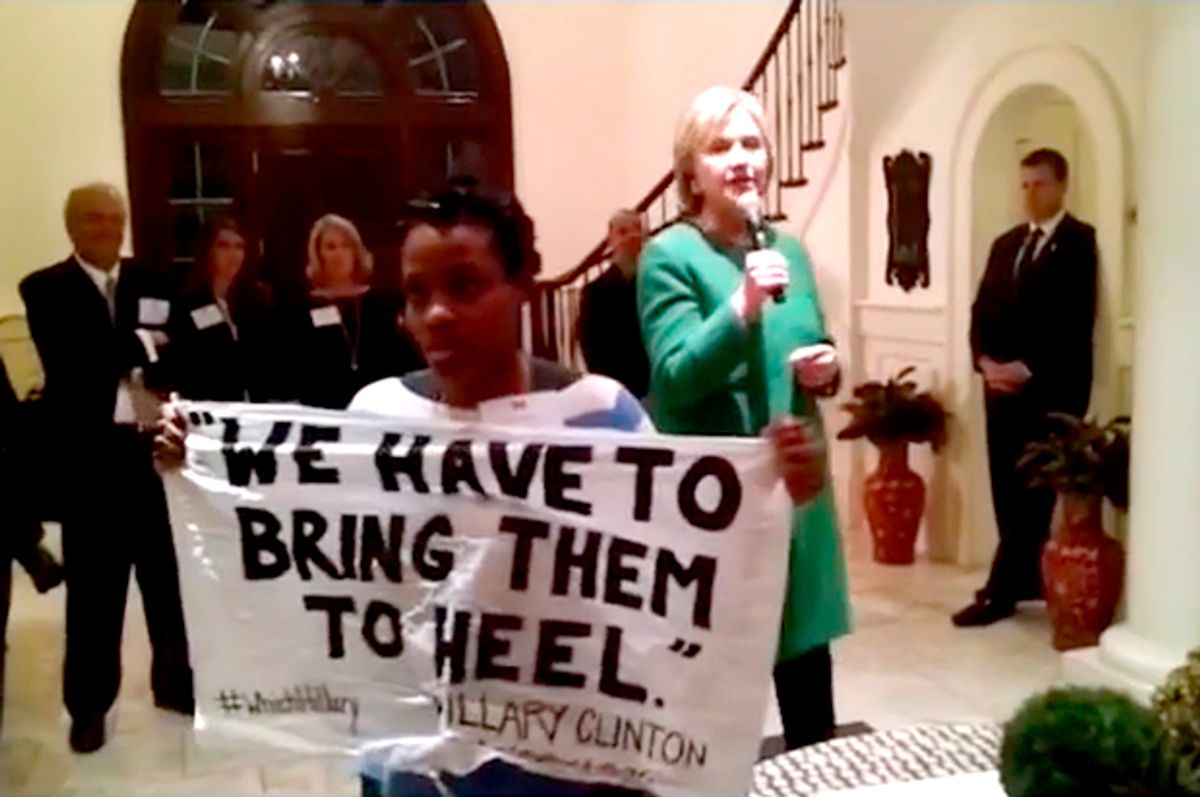 The furor that broke out last night, however, may just shift the political winds.

In the middle of a $500-per-person Clinton fundraising event in Charleston on Wednesday evening, a young Black Lives Matter activist stepped out in front of the former secretary of state, turned toward the small audience, and held aloft a banner emblazoned with the phrase, “We need to bring them to heel.”

The protester, as she later explained, “wanted to make sure that black people are paying attention to [Clinton’s] record” by drawing attention to the racist rhetoric Clinton used in 1996, when she, as first lady, strongly supported the “tough on crime” method of governance, and successfully lobbied for a bill based on that method to be passed into law.

“They are not just gangs of kids anymore,” Clinton warned the public at the time. “They are often the kinds of kids that are called ‘super-predators.’ No conscience, no empathy. We can talk about why they ended up that way, but first we need to bring them to heel.”

The crime bill that Clinton advocated for is now widely regarded as a “terrible mistake,” and the demonizing language that she used to describe young people who belong to gangs (a group that, because of institutionalized racism and oppression, is majority black and Latino/a) would now be political suicide.

Since the '90s, the Democratic Party — and Hillary Clinton along with it — has morphed from voicing demagogic, dangerous ideas about black children and supporting catastrophic crime policies to, today, speaking of how “we have allowed our criminal justice system to get out of balance,” and promising an end to the decades-long era of mass incarceration, which, of course, they hold much responsibility for creating.

But, despite Clinton’s sudden populist transformation, the memory of the American people isn’t quite so short and fleeting.

Indeed, the ‘94 legislation threw millions of black women and men into prison; in fact, throughout Bill Clinton’s presidency, the black prison population increased by 50 percent.

All of this spelled mass incarceration and mass disenfranchisement for the black Americans of South Carolina.

Today, due to felonies, one out of every 27 black voters in South Carolina is disenfranchised, and, although black people make up just 28 percent of the state’s population, they account for a devastating 62 percent of the prison and jail population, in no small part because of the draconian measures the Clinton administration, along with the strong support of its first lady, took in the name of being “tough on crime.”

And now, 20 years later, at the end of February 2016, Clinton finds herself being directly challenged by a young Black protester named Ashley Williams on her past rhetoric and role in creating America’s stringent criminal justice system, under which people are still being penalized today, including those in South Carolina.

With the state’s primary looming, a respectful and honest response to this confrontation was vitally important for Clinton — and she fell dismally short.

“We want you to apologize for mass incarceration,” Williams said last night, facing the former secretary of state head-on.

“I’m not a super-predator, Hillary Clinton.”

Hisses and grumbles emanated from the audience.

“Can you apologize to black people for mass incarceration?”

“Well, can I talk, and then maybe you can listen to what I say?” Clinton responded.

Following Clinton's lead, the hissing from the audience amplified.

“OK, fine, thank you very much. There are a lot of issues, a lot issues in this campaign. The very first speech that I gave back in April was about criminal justice reform—“

“You called black people ‘super-predators,’” Williams said, interrupting Clinton to bring the focus back to the words Clinton spoke and the positions she held as first lady.

“Whoa, you’re being rude,” came voices from the audience. “This is not appropriate.”

Clinton cut her off: “Do you want to hear the facts, or do you just want to talk?”

“Please explain your record to us,” Williams asked Clinton. “You owe black people an apology. You owe people of color an apology.”

“Let her talk, let her talk.” The audience grew louder and angrier on Clinton’s behalf.

“I’ll tell you what, if you will give me a chance to talk, I’ll approach your subject — you know what, nobody’s ever asked me that before,” Clinton said, as Williams was physically removed by a white security guard.

The former secretary of state then turned to her remaining audience and said, “OK, back to the issues.”

The crowd let out a huge sigh, and one woman said, “Thank you!”

(Later Thursday, Clinton sent a statement to the Washington Post apologizing for her '90s remarks):

In a written response to The Washington Post's Jonathan Capehart on the issue Thursday, Clinton said: “Looking back, I shouldn’t have used those words, and I wouldn’t use them today."

"My life’s work has been about lifting up children and young people who’ve been let down by the system or by society, kids who never got the chance they deserved," Clinton continued in the statement. "And unfortunately today, there are way too many of those kids, especially in African-American communities.  We haven’t done right by them.  We need to.  We need to end the school to prison pipeline and replace it with a cradle-to-college pipeline."

And indeed, three days ago, Clinton stated that, “White Americans need to do a better job at listening when African-Americans talk about the seen and unseen barriers they face every day. Practice humility rather than assume that our experience is everyone’s experience.”

While the virtually all-white crowd hissed and verbally attacked Williams, Clinton did nothing to quiet them. She did not wield her privilege and position of power to demand those following her show respect to a young woman understandably and rightfully upset by racial injustice.

Instead, she repeatedly snapped at Williams — “Do you want to hear the facts, or do you just want to talk?” — and tried to quickly answer Williams’ call for an apology by discussing the speech she made 10 months ago, instead of the language she used in the ‘90s.

When Williams pressed her to be more specific, Clinton grew even more visibly annoyed and her tone further sharpened — a bad “job [of] listening” with “humility” and giving credit to Williams’ experiences and concerns.

It was a poor showing of Clinton’s comprehension of the severity of the issues facing black Americans. Despite the institutional racism and mass incarceration drowning black Americans today, Clinton acted as though Williams’ emotionally charged protest was completely out of line.

Then, when a white, male security guard put his hands on the young, black, female protester, and forcibly coaxed her away from Clinton, Clinton’s response was, “OK, back to the issues,” not only allowing a young activist to be physically removed from Clinton’s presence, but problematically implying that Clinton’s trustworthiness on black rights and black lives to black voters is not, somehow, one of “the issues.”

If she cannot swiftly and straightforwardly apologize to a young black woman for what she did in the ‘90s, Clinton reveals herself to have never thought about her actions, to have never unpacked her white privilege, and to be largely incapable of “practic[ing] [the] humility” she is now calling upon her fellow white Americans to employ.

Williams' concerns before her protest were in no way dispelled by Clinton’s actions, but rather intensified:

“Hillary Clinton has a pattern of throwing the Black community under the bus when it serves her politically. She called our boys ‘super-predators’ in ’96, then she race-baited when running against Obama in ‘08, now she’s a lifelong civil rights activist. I just want to know which Hillary is running for President, the one from ’96, ’08, or the new Hillary?"

Additionally, Clinton’s record and response last night do not contrast well with Bernie Sanders’, who had this to say in the ‘90s while Clinton was calling young black children “super-predators”:

“We have the highest percentage of people in jail per capita of any nation on earth — what do we have to do, put half the country behind bars?

Mr. Speaker, instead of talking about punishment and vengeance, let us have the courage to talk about the real issue — how do we get to the root causes of crime?

If you want to get tough on crime, let’s deal with the causes of crime. Let’s demand that every man, woman, and child in this country have a decent opportunity and a decent standard of living.

In comparison to Sanders’ positions in the ‘90s, and in light of how Clinton responded last night to questions about her past —over which there is already a growing controversy — South Carolinian black voters may very well shift their support to the candidate who has never depicted their children as having “no conscience, no empathy” or being “super-predators,” but called for “every man, woman, and child in this country [to] have a decent opportunity” since the ‘90s.

Either way, the entire country will find out the day after tomorrow.