"Playing to the Edge" offers readers a glimpse into the U.S. government's support for brutal Middle East dictators 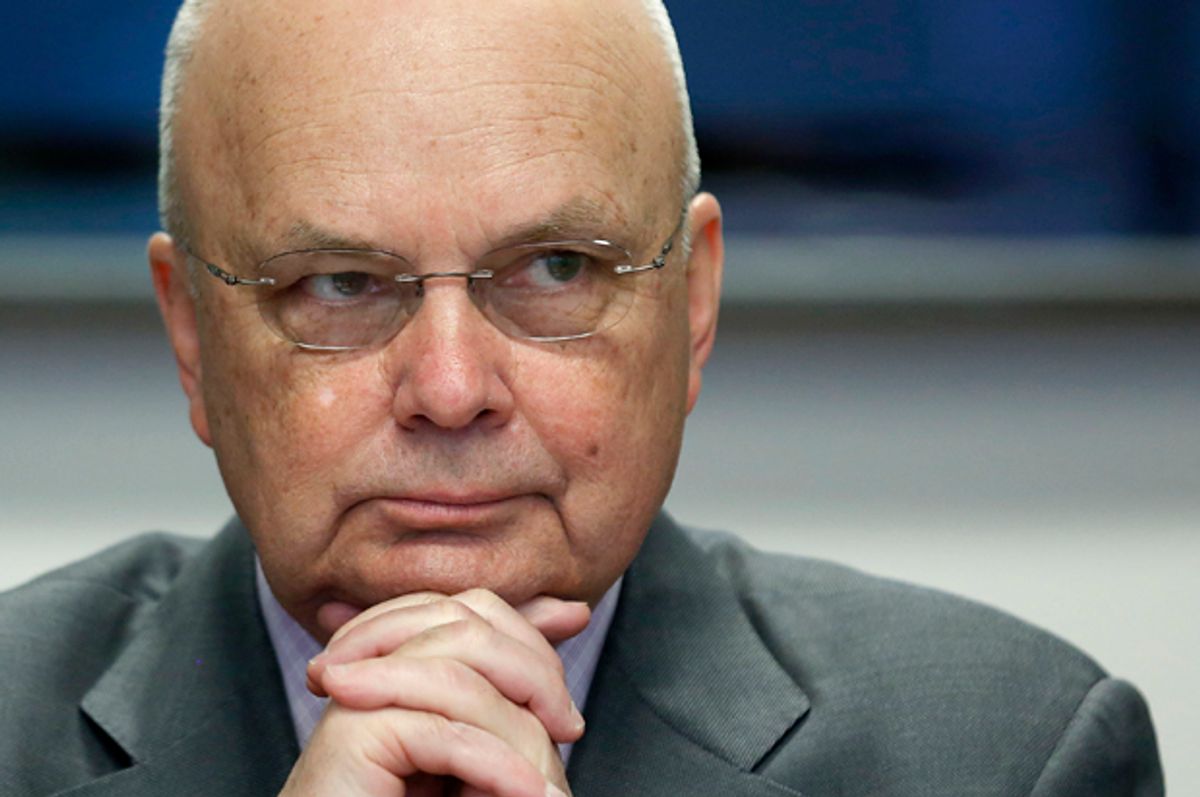 "We rarely visited Egypt, or anywhere else in the Middle East, without stopping in Saudi Arabia," writes Michael Hayden, former director of both the CIA and NSA, in his new book "Playing to the Edge: American Intelligence in the Age of Terror."

"When we did, King Abdullah usually made time for us," Hayden adds, referring to the dictator of Saudi Arabia, the world's largest sponsor of Islamic extremism — and the site of the planet's second-largest oil reserves.

Hayden, not one to mince his words, speaks in the book of "the unspoken contract between... the two countries: oil for security, security for oil."

At a dense 415 pages, "Playing to the Edge," which was released this week, thoroughly details Hayden's work as one of the most prominent U.S. intelligence officials in history. It is primarily devoted to the last 17 years, and especially to the so-called War on Terror Hayden helped initiate after the 9/11 attacks.

In a chapter about his work as the head of the CIA from 2007 to 2009, the final years of the Bush administration, Hayden discusses the trips he took to a variety of countries. Most interesting among these are the meetings the U.S. intelligence official had with Middle Eastern despots.

One anecdote depicts Hayden sitting "within arm's reach of" Egyptian strongman Hosni Mubarak, a dictator who ruled Egypt with an iron fist for almost 30 years. Despite his harsh repression of democratic dissent, Mubarak received steadfast U.S. support — and an annual $1.5 billion in military aid — right up until he was overthrown in the Jan. 25, 2011 revolution.

"Occasionally, he [Mubarak] would lean forward, put his hand on my arm, confide to me that he knew that we were both military officers (both air force, in fact), absolve me of personal blame, and then resume his tirade," Hayden recalled.

Even more illuminating, however, is Hayden's recounting of personal meetings with Saudi royalty, like King Abdullah, who resided over a brutally repressive absolute monarchy in which women are second-class citizens not afforded basic rights, law is based on an extreme interpretation of Sharia (Islamic law) and nonviolent protesters are regularly sentenced to death by beheading and crucifixion.

The kingdom abides by a fundamentalist version of Sunni Islam known as Wahhabism, and has spent an estimated $100 billion exporting its extremist religious ideology around the globe in the past few decades. U.S. State Department cables leaked by WikiLeaks admit that "donors in Saudi Arabia constitute the most significant source of funding to Sunni terrorist groups worldwide," the most well-known of which is al-Qaida.

In the Saudi regime, people are summarily executed for things like nonviolent drug offenses. In fact, according to the leading human rights group Amnesty International, from 2014 to 2015, an average of one person was killed every four days for drugs. At the same time, Saudi princes have been caught with 4,000 pounds of drugs at foreign airports.

Although Saudi Arabia does not have the world's largest oil reserves, the largest are in Venezuela, a country the U.S. considers an enemy, and one which has vociferously criticized U.S. imperialism in Latin America (the U.S. helped overthrow the nation's democratically elected government in 2002). When Saudi Arabia is combined with neighboring Gulf states Kuwait, Qatar and the United Arab Emirates, however, all of which also have some of Earth's largest oil reserves, it is by far the most oil-dense region of the planet.

Moreover, Saudi Arabia is a dedicated customer in the arm industry. In recent years in particular, the regime has purchased more and more U.S.-made weapons. From 2010 to 2015, the Obama administration sold more than $100 billion of arms and military equipment to the Saudi monarchy. (It has proceeded to use these weapons in its catastrophic war in Yemen.)

Hayden's stories of "delightful" meetings with the regime's officials expose how cozy the U.S.-Saudi relationship is. He also draws attention to how many of Saudi Arabia's officials were in fact trained by the U.S. government and military.

In one anecdote, Hayden recalls "visit[ing] the king at his farm (some farm — gardens, fountains, etc.) in Morocco," along with Steve Kappes, then deputy director of the CIA.

"The monarch, moving slowly with cane in hand, quite unexpectedly met us at the entryway to his estate house," Hayden continued. "We had a lot of time for the king. He obviously had time for us."

What exactly was the subject of these discussions? "Abdullah was passionate about Iran," the kingdom's nemesis, Hayden said, "urging us to 'cut off the head of the snake'" (given its proclivity for beheading dissidents, it may come as no surprise that the Saudi regime is fond of using such imagery vis-à-vis its enemies).

The Saudi monarch "warn[ed] us to be careful not to 'lose our aura' in the region," he added.

Hayden noted that Adel al-Jubeir, the Saudi regime's former ambassador in the U.S., and now foreign minister, typically translated for the king.

"Adel knew America and CIA well; he was a graduate of the University of North Texas and Georgetown, and since his home was just down Chain Bridge Road from Langley, he was always a welcome guest at CIA for tea and conversation," Hayden wrote.

"Abdullah had deep concerns about America's troubled Iraq policy," Hayden recollected. The U.S.' disastrous war in Iraq ended up ironically strengthening Iran, moving the country even closer to the Middle Eastern superpower. Saddam Hussein had fought Iran throughout the 1980s, with U.S. backing (the U.S. in fact helped Saddam as he gassed and massacred civilian populations, primarily Iranians and Kurds). The sectarian Shia-led government the U.S. created in Iraq leaned more toward Iran, and the sectarian Shia death squads trained and supported by the U.S. in order to fight the largely Sunni insurgency served to make violent sectarianism much worse.

Al-Jubeir reportedly calmed the king's nerves. "In what was clearly a bow to American pragmatism," Hayden wrote, "Adel told us that he had responded, 'Your Majesty, these are Americans. If it's not working, they'll change it.'"

Hayden goes on to describe Prince Mohammed bin Naif, who directed what he refers to as "the all-powerful Mabahith, the kingdom's internal intelligence and investigative service and our primary point of contact in Saudi Arabia." This is one way of describing the Mabahith; the more common way is the Saudi regime's secret police.

"Mabahith agents operate with impunity and have been responsible for a wide range of human rights abuses, including arbitrary arrest, incommunicado detention, and torture," the human rights organization noted.

Calling the Saudi aristocrat "an incredibly tough counterterrorism professional," Hayden drew attention to the fact that Prince bin Naif "had been educated in Oregon with additional professional classes with the FBI and Scotland Yard."

In another anecdote in the book, Hayden recalls "a delightful and informative evening" he enjoyed with Prince Bandar bin Sultan in the western Saudi city of Jeddah. Bandar, who was then secretary general of the Saudi National Security Council, "wanted to sustain his American connections, and we were more than happy to meet with the garrulous, USAF-trained ex-fighter pilot," Hayden wrote, noting that the Saudi aristocrat was trained by the U.S. Air Force.

Hayden said the prince capped off the meeting "gifting me with a large, framed photo of President Roosevelt meeting King Abdul Aziz bin Saud, the founder of the kingdom, on the cruiser Quincy in Great Bitter Lake along the Suez Canal in February 1945." Hayden did not mention that FDR's meeting with the Saudi king, just two months before his death, ironically took place on Valentine's Day — a symbolic temporal coincidence, if there ever was one.

"The scene commemorated the unspoken contract between the two men and the two countries: oil for security, security for oil. Bandar was messaging," Hayden wrote, adding, "I hung the photo in my Langley office, not least because the uniformed translator kneeling between the two leaders [in the 1945 meeting] was Colonel Bill Eddy, a member of OSS, CIA's organizational ancestor."

Hayden's stories remind one of George Bush's own meeting with Saudi King Abdullah at the former's Texas ranch in 2005. The U.S. president held hands with the Wahhabi autocrat during his visit, a sign of friendship. Oil really has a way of bringing people together.