Trump Rules in effect: The Donald fields softball questions while Hillary gets grilled

The GOP's presumptive nominee sits down for an hour with CNN and is asked what he orders at McDonald's. Journalism! 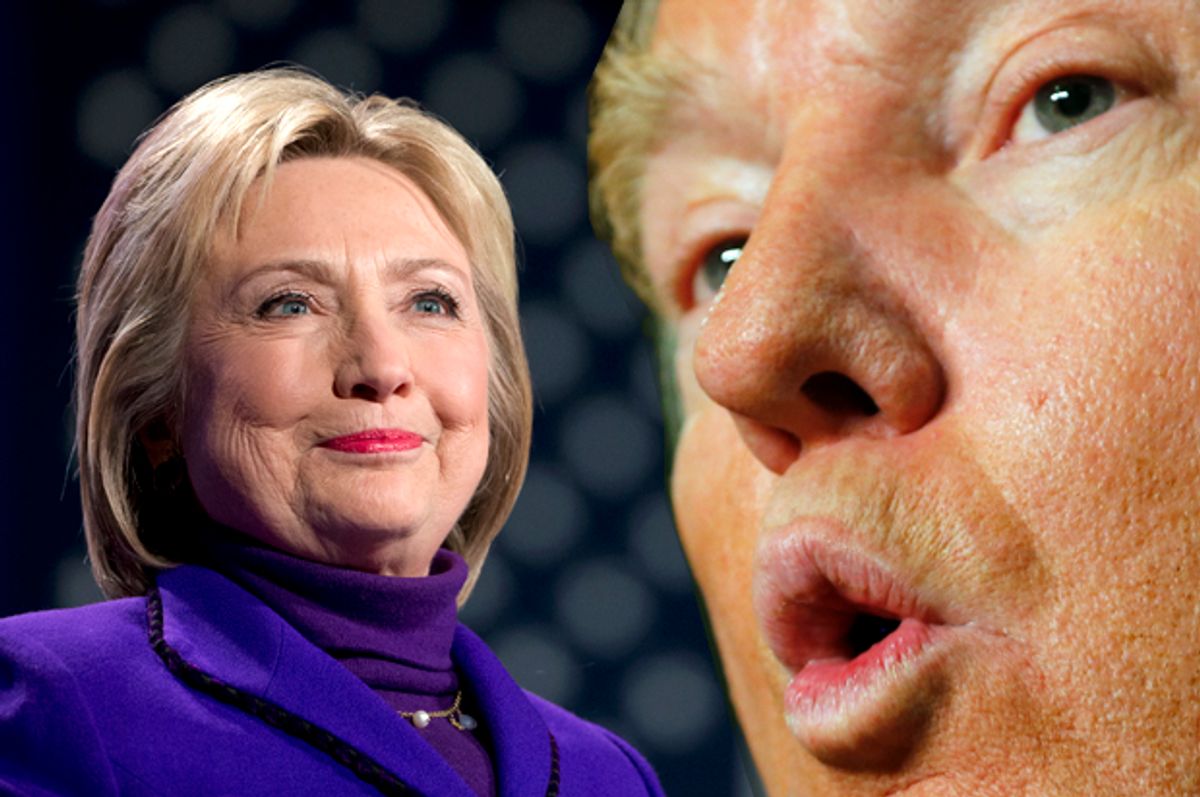 "For now, Trump is generally considered a unicorn -- a candidate who gets away with things no one else could." Washington Post, February 22.

Switching back and forth between MSNBC and CNN last Thursday night as they aired competing, hour-long interviews with Hillary Clinton and Donald Trump, viewers ran the risk of whiplash. The threat lingered not just because Clinton and Trump were on opposite ends of the political spectrum, but because the tone and tenor of the two events seemed dramatically different.

Here were some of the questions posed to Clinton from the MSNBC event's co-moderators, NBC's Chuck Todd and Telemundo's José Díaz-Balart:

By contrast, here were some of the questions posed to Trump from the CNN moderator, Anderson Cooper:

Obviously, those questions don't reflect everything asked over the 60-minute programs. And I'm not suggesting Trump didn't get any policy questions during his CNN sit-down. But the vibe from MSNBC's Clinton event was definitely, Midterm Cram Session, while the vibe from CNN's Trump event leaned towards, People Magazine Wants To Know. (One week later, Clinton sat for a CNN town hall where she did not receive any of the light, lifestyle questions that were asked to Trump.)

In a way, the interviews nicely captured the unfolding guidelines for the 2016 campaign season. With both Clinton and Trump enjoying big election wins last weekend and now apparently with inside tracks to their party's nomination, we're beginning to see signs about what the press coverage of a Clinton vs. Trump general election might look like.

Bill and Hillary Clinton have been in the public spotlight so long, and have been sparring with the Beltway press for so many years, that so-called Clinton Rules have been established. They outline the informal guidelines media follow when covering the Clintons.

The one-word distillation of the Clinton Rules? Negativity. Likely followed by distrust, snark, and condescension. Simple facts are considered optional and the Clintons are always, always held to a different, tougher standard than everyone else.

By contrast, Trump has only been in the campaign spotlight for eight months but I'd suggest the media's Trump Rules have already come into focus: Intimidation, aggrandizement, and a lack of curiosity.

In other words, when you fly above the campaign season with a bird's eye view, it seems inescapable that the press is being soft on the Republican, while at the same being hard on the Democrat.

Have reporters and pundits given Trump a complete pass? Absolutely not. (See more below.) Just as with the Clinton Rules, there are always exceptions to the coverage. But in terms of a vibe and a feel, it's hard to claim that Trump is getting hit with the same relentlessly caustic (she's doomed!) coverage that follows Clinton around everywhere she goes.

Can anyone even imagine what the relentless, almost hysterical, press coverage would look like if Clinton rallies were marred by violence, and if she denounced campaign reporters as disgusting liars? So far, neither of those phenomena from the Trump campaign have sparked crisis coverage from the press.

Some journalists are starting to concede the Trump Rules are in effect. The Washington Post just dubbedTrump a "unicorn" because he gets away with things no other candidate does. On Twitter, BuzzFeed editor Ben Smith suggested "there's obviously been a trade, mostly on TV, of laying off his dishonesty and bigotry on exchange for access."

Do we know, at this point, about his modus operandi in business? Do we know how he treated his staff? Do we know what kind of leader he was when he was building his business? I mean, I don't know the answers to these things. All I know is that, when I see him now, it's like his past is not being used by the media to tell us who the guy really is.

And neither do I.

For instance, I don't know much about Trump's finances. Clinton last year released eight years of tax returns but Trump won't yet give a firm answer regarding if and when he'll do the same. So why hasn't that been a pressing media pursuit?

It's the most -- probably the most embarrassing coverage of a candidate that I've seen in my 11-God- help-me presidential campaigns. First of all, we're aggrandizing him like crazy because he boosts ratings. Second of all, we're not doing our job.

Days later, leaked audio from MSNBC's infamous Trump town hall event seemed to confirm a central claim that excessive Trump coverage -- and usually the fawning variety -- is good for business and good for media careers. During a commercial break after Mika Brzezinski thanked Trump for participating in the town hall event, Trump said, "I'm doing this because you get great ratings and a raise -- me, I get nothing."

They don't teach that at journalism school.

Note that the strange part of the larger Trump Rules phenomenon is that the candidate mouths so muchconstant nonsense on the campaign trail, you'd think he'd dread going on TV and answering pointed questions about his bullying campaign. But it's quite the opposite. Because even when journalists raise thorny topics with him, they usually give Trump a pass.

For instance, on Sunday's State of the Union, CNN's Jake Tapper asked Trump about the white supremacist supporters he had retweeted, which certainly constitutes a probing question that likely made Trump uncomfortable, right?

Not exactly. While the initial question from Tapper was good, when Trump responded with a rambling, 600-word non-answer, which concluded with him vowing to bring jobs back from India, Tapper simply moved on to the next topic instead of drilling down on the fact that the Republican frontrunner was retweeting white supremacists.

Or hit the Wayback Machine to last September when Trump appeared on CBS's Face the Nation and spun for host John Dickerson the fantastic tale about how 9/11 terrorists had tipped off their (mostly non-existent) wives about the pending terror attack, and had their (mostly non-existent) wives flown home days before hijacked planes hit the World Trade Center.

Print journalists seem to be doing a better job at fact-checking Trump. To his credit, Glenn Kessler at The Washington Post has called out some of Trump's more outlandish claims. Kessler's recent foray surrounded Trump's "truly absurd claim he would save $300 billion a year on prescription drugs."

Have occasional findings of fact like that changed the often-breezy tenor of Trump's overall coverage? No they have not. Because two days after Kessler's Medicare takedown, Trump was interviewed for an hour on CNN where the candidate wasn't asked about his nutty prescription drug estimates. But he was asked what kind of music he likes and if he orders French fries at McDonald's.

Welcome to the Trump Rules.