Clinton refuses to release her transcripts unless Republicans release theirs first. That won't cut it this election 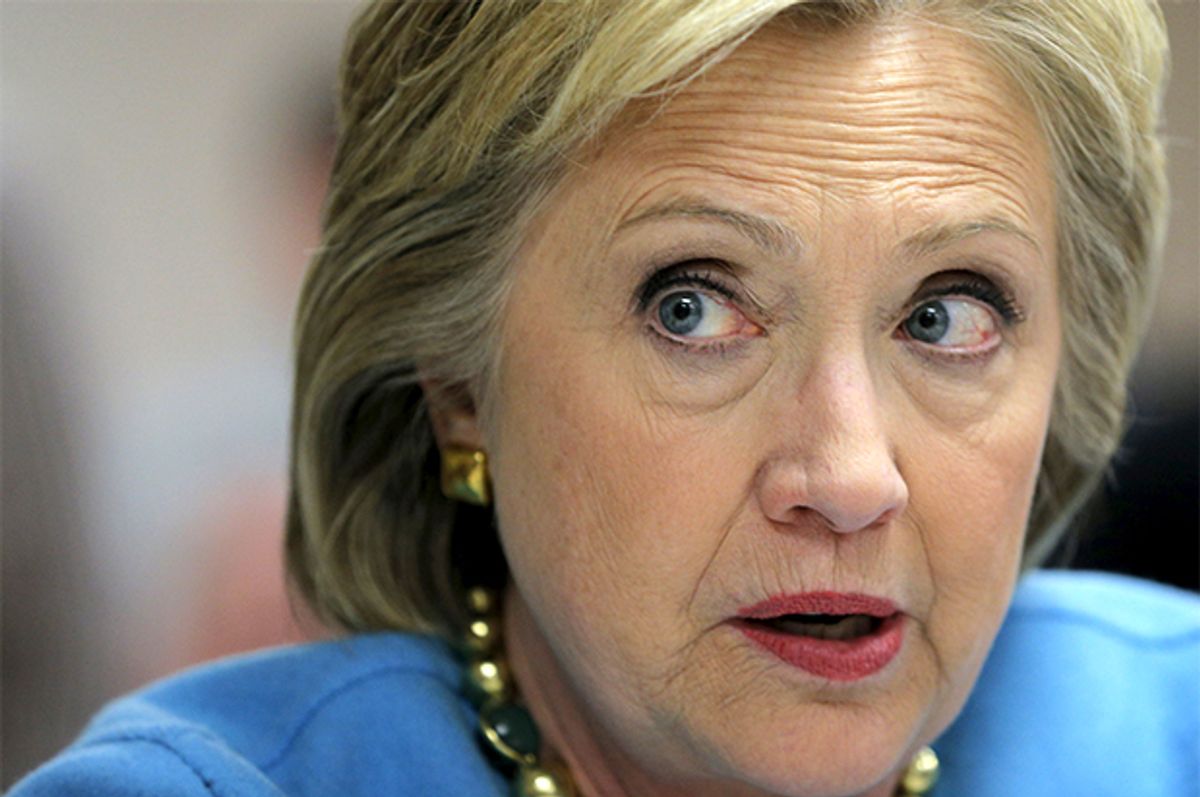 “Will you agree to release these transcripts?” Cuomo asked. “They have become an issue.”

First, the former Secretary of State stated that before she, a Democrat, would release the well-paid, closed-door speeches she’s made to her wealthy campaign contributors, the Republicans have to release theirs first.

“Sure, if everybody does it — and that includes the Republicans,” Clinton answered, later adding, “So you know what, if people are going to ask for things, everybody should be on a level playing field.”

Has Clinton suddenly decided to seek the Republican nomination?

If not, she should reasonably be expected to meet the same level of candor and forthrightness as her Democratic opponent, Bernie Sanders, who has already released one paid speech (the earnings from which were “respectably donate[d] to charity”).

Additionally, the G.O.P. presidential field is made up of candidates who are pushing tax plans that stronglyfavor the rich, advocating for the decimation of regulations on wealthy corporations, and receiving millionsin Super PAC contributions from the Koch brothers, who are trying to “buy up our political system.”

Are these truly the standards Clinton believes Democratic voters should hold her to?

The former Secretary of State herself has dubbed the Republicans her “enemy,” and, at the beginning of this month, responded to a question asking if she thought there truly existed a “vast right-wing conspiracy” with the following:

“Don’t you? Yeah, it’s gotten even better-funded. You know, they brought in some new multi-billionaires to pump the money in… At this point it’s probably not correct to say it’s a conspiracy, because it is out in the open. There is no doubt about what they’re doing.”

Clinton consistently attacks the Republicans as corrupt, conspiratorial, and dangerous (which they are), and yet is now using them as a shield to protect herself from disclosing to American voters exactly what she said to the rich and powerful behind closed doors.

This flip-flop is nothing if not hypocritical, especially so because several of those “multi-billionaires… pump[ing] money” to Republican candidates, are also donating to Clinton herself.

Second, Clinton states there is “no question” she has a record “that already demonstrates my willingness to take on Wall Street and other financial institutions,” because “I did it before the ’08 Crash. I went to Wall Street before the Great Recession. I called them out. I said what they are doing in the mortgage market was going to cause serious problems.”

This recounting of her ’07 speech is strikingly divergent from reality.

Numerous reports describe how Clinton “gave a shout-out to her ‘wonderful donors,’” “praised Wall Street for its role in creating the nation’s wealth,” and assured the banks they were not the main reason for the churning economic instability, “not by a long shot,” but that “homeowners should have known they were getting in over their heads.”

Clinton did not, as she put it last night, “call them out,” but cheerily released the financial executives from blame, only saying she would “consider legislation” if they did not voluntarily change their risky lending behavior.

Spoiler alert: they didn’t, and, soon after she spoke with them, the economy crashed.

Additionally, contrary to her benevolent reckoning of who was to blame for the teetering economy, it is quite clear that Wall Street holds the majority of responsibility for the ’07 Crash, along with U.S. politicians and government officials.

As The New York Times reports, “The 2008 financial crisis was an ‘avoidable’ disaster caused by widespread failures in government regulation, corporate mismanagement and heedless risk-taking by Wall Street, according to the conclusions of a federal inquiry.”

The homeowners Clinton says “should have known they were getting in over their heads” were the victims of Wall Street’s actions, targeted specifically by large, profit-seeking financial institutions because they were low-income immigrants and people of color lacking financial literacy.

Clinton also commended Wall Street for helping to create “the nation’s wealth,” when, in reality, according to the Economic Policy Institute, the “economic cycle that began in 2000 and ended late [2007] was one of the weakest on record for working families, despite strong overall economic growth.”

In other words, that strong growth was shooting to the wealthiest Americans: Wall Street creates wealth for Wall Street, not the middle- or lower-classes.

Far from the description she gave last night of “call[ing] them out,” Clinton continuously praised the large financial institutions and the humans who ran them, while blaming the low-income, vulnerable homeowners preyed upon by Wall Street in the name of monetary profit.

It seems as if Clinton’s recent speeches to Wall Street have been much of the same. Attendees describe her remarks as “gushy,” and others say “she sounded more like a Goldman Sachs managing director” than the firebrand, populist warrior in whose cape she is now attempting to cloak herself.

In her continued effort to prove her record of fighting Wall Street, Clinton went on to cite how, in 2007, she “called for ending the loophole that lets hedge fund managers get a lower tax rate.”

It most certainly is true that, while running for president in 2007, Clinton made campaign speeches attacking the tax break for hedge-fund and private-equity executives — one of the infamous loopholes that allows rich people to pay way less in taxes than they’re supposed to.

However, not only did Clinton hold no leadership position in the movement to close this loophole, she did not even sign her name onto the legislation that would.

As Politico reports, “When [Clinton] had a chance to support a 2007 bill that aimed to curb a tax break she publicly decried for hedge-fund and private-equity executives, she failed to sign on.”

This is not to say that Clinton is some corporate shill conniving with the big banks to sink the middle class — but it is to say that, contrary to her rhetoric today, she was not a torchbearer in the fight against de-regulation and the recklessness on Wall Street. Nor was she even a steadfast follower, but, rather, a passive by-stander.

As The Boston Globe writes, “[Senator] Hillary Clinton was hands-off on Wall Street,” and as Samuel Baptista, a lobbyist for Morgan Stanley while Clinton was in the Senate, says, “I had no contact with her. I don’t think she was ever engaging on those issues. She just didn’t have a lot of interest.”

This bodes ill for Clinton’s current presidential campaign and quest to appear as a stanch advocate for reform, especially because, as former Democratic Representative Brad Miller explains, “What Wall Street wanted then was for everyone to look the other way. And to a large extent, we did.”

Third, Clinton argued Tueday night that the omission of a promise to “break up the banks” in her Wall Street plan is not a weakness, since she will bust them up “if they pose systemic risks, and I’ve said that I would do that if that became the case.”

Unfortunately, it already is the case.

As Forbes writes, “Financial reform didn’t work. Banks today are bigger and more opaque than ever, and they continue to trade in derivatives in many of the same ways they did before the crash, but on a larger scale and with precisely the same unknown risks.”

The Financial Stability Board’s 2015 report lists eight U.S. banking behemoths that are considered to be too big to fail, which means they pose, as Market Watch reports, “a threat to the global economy and financial stability if they were to collapse.”

Indeed, economists are already worrying they might crash our economy yet again.

Clinton’s idea that the large financial institutions do not already “pose systemic risks” is cause for grave concern.

Fourth, Clinton used the example of President Obama to highlight her argument that receiving large donations from financial institutions has had no effect on her, and would not hinder her regulation of them if elected president.

“President Obama took more money from Wall Street than anybody ever had,” Clinton said at the South Carolina town hall last night, “and then he turned around and pushed through the best reform we’ve had in a long time.”

The Dodd-Frank Act was indeed the strongest reform in decades, but only because, for the past thirty years, the U.S. government has been continuously de-regulating the economy, and Wall Street along with it.

As The Guardian reports, “…Even the most favorably inclined observer would have to acknowledge that Dodd-Frank hasn’t done a terribly impressive job.”

The weakness of Dodd-Frank is troubling evidence of the fact that the American government has long been dismally failing its people and destroying their chances of economic security.

Additionally, the Obama administration has otherwise fallen short of accomplishing what is necessary in terms of financial reform.

A single Wall Street executive was prosecuted for the disastrous ’07 Crash.

This country imprisons more of its people than virtually any other nation on Earth, and yet, when it comes to white-collar individuals plummeting the economy into the worst down-turn since the Great Depression, only one (and with a non-white name, at that) is jailed.

Furthermore, as Salon writes, “In 2008, Obama raised more money from big business than any candidate in either party’s history and in 2009 he hired the most conservative economic team of any Democratic president since Grover Cleveland. He then sided with insurers against a public option, with banks against rescuing homeowners and with business against raising the minimum wage.”

Obama is not the standard-bearer for corruption-free, people-focused governing — and for Clinton to suggest that her presidency would follow in the footsteps of Obama tells voters that the big banks would continue to dominate under a Clinton administration.

Fifth, Clinton posits that she has the “most effective” plan to reign in Wall Street.

This is simply untrue.

In other words, Clinton is advocating for minor reform of the system, instead of its overhaul, which, as Dean Baker, American macroeconomist and co-founder of the Center for Economic and Policy Research,says, is necessary and “will lead to a qualitatively different financial industry," with far less chance of crashing the economy.

Additionally, Clinton does not explain how she will get regulators to enforce the laws that already exist — a rather large and looming problem.

All in all, as The Atlantic writes, “The Clinton plan looks like a laundry list of marginally better-than-nothing reforms that are likely to vanish into an abyss of rule-writing and regulatory dithering. If she wanted to position herself as the heir to President Obama — who talked a good game while leaving Wall Street largely as he found it — she couldn’t have done a better job.”

But, perhaps most importantly of all, Wall Street executives themselves are not worried.

Guggenheim Partners’ Jaret Sieberg recently wrote in a note to clients that, “We continue to believe Clinton would be one of the better candidates for financial firms.”

Since the beginning of her campaign, and in response to the mounting challenge from Bernie Sanders, Clinton has bopped from argument to argument in an attempt to shed voter suspicion concerning the millions Wall Street and other special interests have given her, both in campaign contributions and in speaking fees.

From 9/11, to Obama, to the “to cut it out” speech, to the hedge-fund tax break, to the strength of her current plan, and now to hiding behind the Republicans — it does not seem as if Clinton has found herself a satisfactory answer.

Whether or not this will impact voters enough to end her chances of winning the Democratic nomination, only time will tell.