Tulsi Gabbard left the Democratic National Committee, which has been accused of pro-Hillary bias, to support Bernie 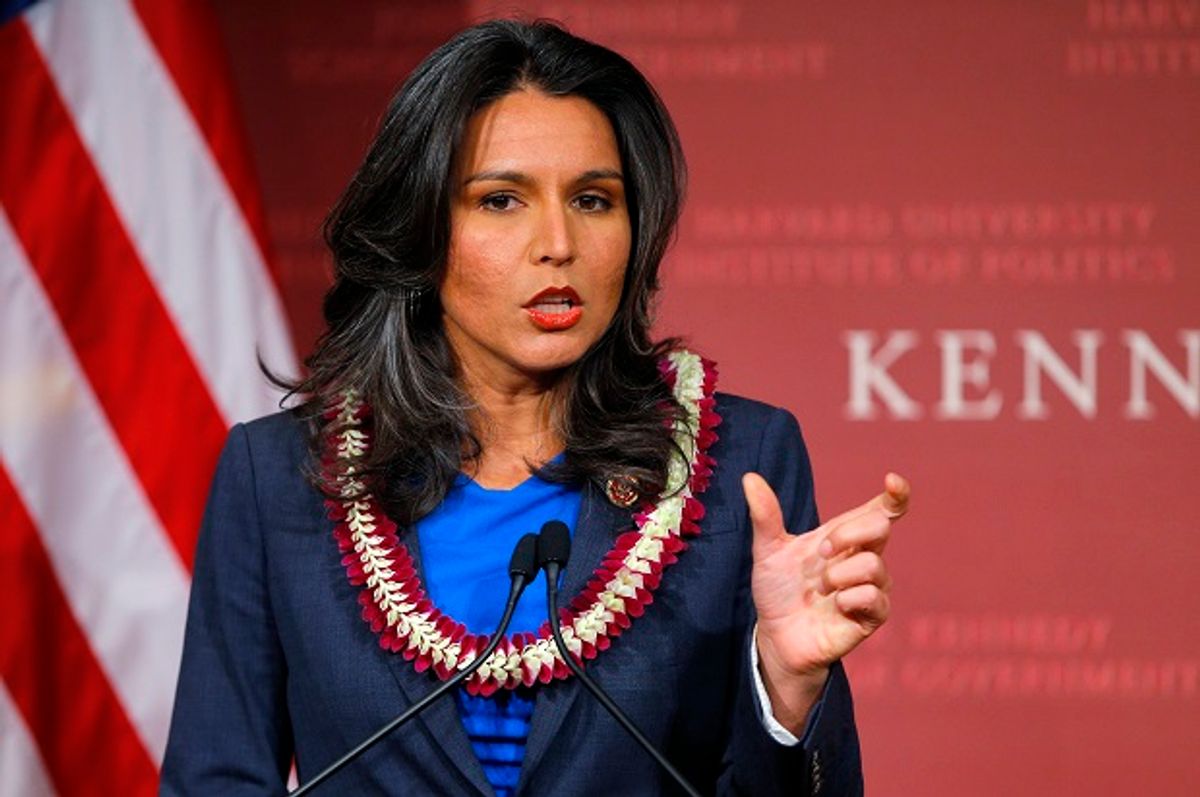 Congresswoman Tulsi Gabbard (D-HI) speaks at an award ceremony at the Kennedy School of Government at Harvard University on November 25, 2013 (Reuters/Brian Snyder)
--

Gabbard — who was the first Hindu and first American Samoan to be elected to Congress, as well as the youngest person ever elected to the Hawaii legislature, at age 21 — commended the leftist Vermont senator for his foreign policy, and his opposition to the hawkish policies of fellow presidential candidate Hillary Clinton.

"After much thought and consideration, I've decided I cannot remain neutral and sit on the sidelines any longer," she wrote in an email to fellow DNC officers obtained by Politico.

"There is a clear contrast between our two candidates with regard to my strong belief that we must end the interventionist, regime change policies that have cost us so much," Gabbard said.

"This is not just another 'issue.' This is THE issue, and it's deeply personal to me," Gabbard continued. "This is why I’ve decided to resign as Vice Chair of the DNC so that I can support Bernie Sanders in his efforts to earn the Democratic nomination in the 2016 presidential race."

In numerous presidential debates, Sanders has criticized the U.S. policy of regime change, in which the government overthrows foreign leaders in order to advance its own interests — such as the CIA-backed 1953 coup that violently toppled Iran's democratically elected government on behalf of oil corporations, or the U.S.-orchestrated 1973 coup that destroyed Chile's democracy and replaced popular elected Marxist President Salvador Allende with totalitarian far-right dictator Augusto Pinochet.

Gabbard, who is a member of the House Armed Services Committee, has condemned U.S. policy in Syria. In late 2015, she introduced a bipartisan bill that called for "an immediate end to the illegal, counter-productive war to overthrow" Syrian dictator Bashar al-Assad.

"The war to overthrow Assad is illegal because Congress never authorized it," she said, calling the U.S. policy of arming and training rebels "counter-productive because it actually helps ISIS and other Islamic extremists achieve their goal of overthrowing the Syrian government of Assad and taking control of all of Syria — which will simply increase human suffering in the region, exacerbate the refugee crisis, and pose a greater threat to the world."

Hillary Clinton, on the other hand, has continuously called for a more aggressive U.S. policy in Syria. She pushed for the Obama administration to bomb Syria in 2013, and has persistently called for a no-fly zone, which critics warn could lead to a new international war.

In 2014, Clinton criticized the Obama administration for moving toward diplomacy in Syria, and not further militarization of the conflict. The "hard men with the guns are going to be the more likely actors in any political transition than those on the outside just talking," she scolded.

As secretary of state, Clinton also helped lead the 2011 NATO bombing of Libya, which destroyed the government, plunging the oil-rich North African nation into chaos. Today, there is there is no functioning federal government in much of the country, and large swaths are under the control of extremist Islamist groups like Ansar al-Sharia. In Libya, ISIS has carved out its largest self-proclaimed "caliphate" outside of Iraq and Syria.

Sanders is not 100 percent consistent in his opposition to U.S. militarism. He supported the NATO bombing of Yugoslavia, and backed the disastrous U.S. war in Afghanistan. But his record is by no means as belligerent as that of Clinton, who voted for the illegal U.S. invasion of Iraq and pushed for an incredibly dangerous war with Iran.

Congresswoman Gabbard herself is by no means a dove. She has twice fought in U.S. wars in Iraq — including after the U.S. carried a regime change operation against Iraqi dictator Saddam Hussein in 2003.

The Hawaii representative has also been accused of Islamophobia, and has ties to India's anti-Muslim, Hindu nationalist BJP party.

But Gabbard understands the history of regime change has been one of disaster.

"As a veteran and as a soldier I've seen firsthand the true cost of war. I served in a medical unit during my first deployment, where every single day I saw firsthand the very high human cost of that war," Gabbard said on MSNBC's "Meet the Press," where she announced her decision to endorse Sanders.

"I think it's most important for us, as we look at our choices as to who our next commander in chief will be, is to recognize the necessity to have a commander in chief who has foresight, exercises good judgment, who ... looks at the consequences of the actions they're looking to take, before they take those actions, so we don't continue to find ourselves in these failures that have resulted in chaos in the Middle East and so much loss of life," she explained.

Sanders welcomed the endorsement, calling Gabbard "one of the important voices of a new generation of leaders."

Gabbard, who was one of the DNC's five vice chairs, has "butted heads" with fellow DNC officials "over a thin debate schedule in the months leading to Democratic voting contests for the party's nomination, with Gabbard calling for the group to add more debates to the calendar," Reuters reported.

Critics have joined the former vice chair in arguing that the DNC has limited the number of debates and scheduled them at very inconvenient times — such as the Saturday night before Christmas, during a football game — allegedly to reduce the number of viewers.

The Democratic National Committee is widely seen as biased in the interests of Hillary Clinton. Present DNC Chair Debbie Wasserman Schultz is a longtime ally of Clinton, and served as co-chair of her 2008 campaign for president.

Sanders' campaign accused the DNC and Wasserman Schultz of "actively attempting to undermine" his bid for president.

In a Feb. 11 interview, Wasserman Schultz openly admitted that the Democratic Party's superdelegate system, which consists of unelected party elites who have a large influence on the primary election, exists in order to ensure establishment candidates don't have to run "against grassroots activists."

CNN host Jake Tapper asked the DNC chair, "What do you tell voters who are new to the process who say this makes them feel like it's all rigged?"

"Unpledged delegates exist really to make sure that party leaders and elected officials don't have to be in a position where they are running against grassroots activists," Wasserman Schultz explained.

"I'm not sure that that answer would satisfy an anxious young voter," Tapper replied.