Two words for Hillary if she wants to connect with the financially struggling: "Postal banking"

If Hillary is willing to face down big business to benefit the working class, she should revive postal banking 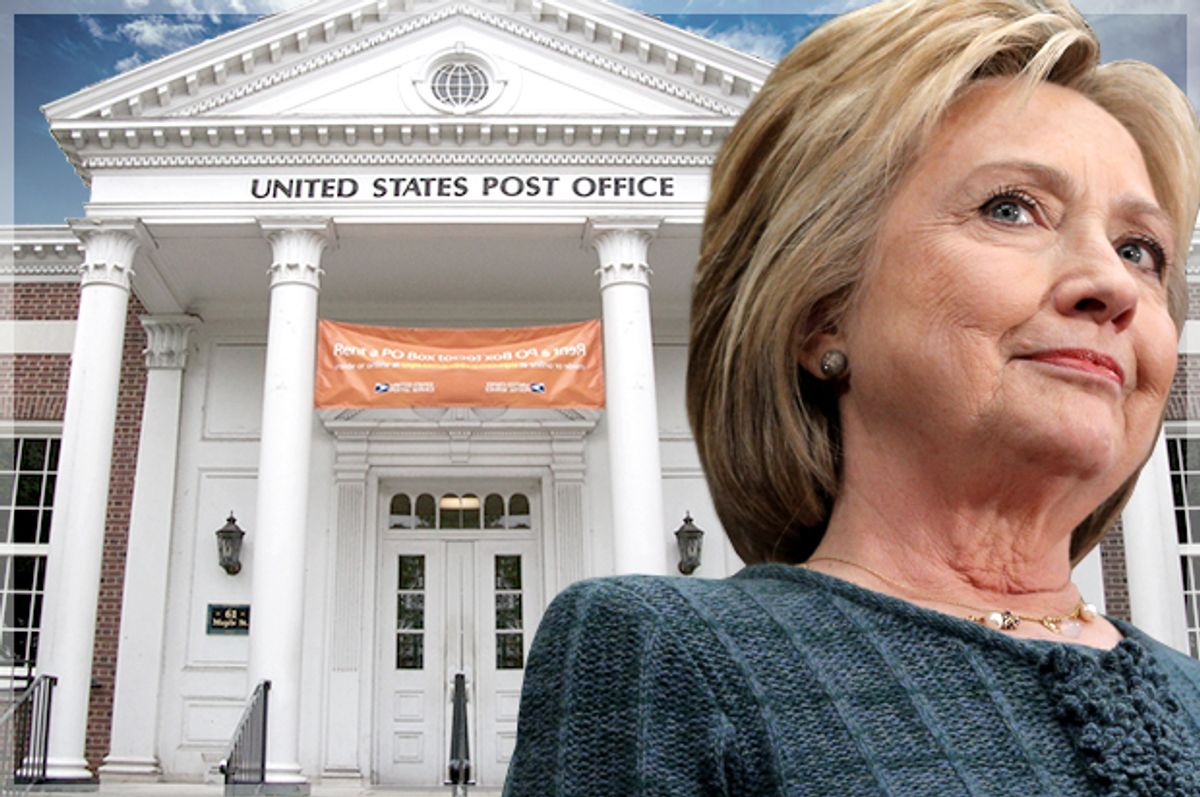 As she watches a man with whom she publicly agrees on almost everything be anointed prince of progress, Hillary Clinton feels the burning desire to have her liberalism recognized. It’s an uphill battle, because she doesn’t appear to understand what it’s like to be a working-class American. Two words can change everything: postal banking.

Hillary hasn't lived on the financial fringe. She’s never stood in a check-cashing line, waiting to pay a fee to convert her earnings, then ridden the bus to a Verizon store so that she can pay her bill in cash, or purchased money orders to send so the heat doesn’t get shut off, her tap run dry. A $25 fee has never meant the difference between Hillary eating lunch all week and a stomach that churns each day from noon until night.

But she can empathize. By championing this one proposition—the offering of savings and checking accounts, money transfers and even small loans by the U.S. Post Office—Hillary can prove her willingness to face down big business for the benefit of the working class. Logistically and politically far easier than raising the minimum wage, postal banking could be key to both securing the nomination and improving the lives of millions of Americans.

Mehrsa Baradaran, a banking law scholar at the University of Georgia School of Law, explains the necessity:

Over half of the U.S. population would need to borrow money if they had a shortfall of $400 due to an unexpected expense. When these people face an emergency, they often have to take out loans from payday lenders at 300-2000 percent APR. And 40 percent of the public is either unbanked or underbanked, meaning that they rely on alternative financial services like check cashers. The unbanked pay around 10 percent of their paychecks to use and move their money. That’s about the amount the average low-income family spends on food.

Baradaran’s book, "How the Other Half Banks," tells the forgotten history of postal banking in the U.S. Most Americans take for granted the presence of a post office in a small town, as well as standardized rates for shipping regardless of how accessible the point of origin or destination. That’s because the Postal Act of 1792, supported by Madison, Hamilton and Washington, “made several crucial decisions.” Among them were that the institution would be financially supported by the federal Treasury: self-sustaining, but not profit-seeking. Another was that the post office would serve every community, with the profitable North/South routes used by merchants supporting the East/West routes.

A century later, the idea of adding banking services began to gain traction thanks to repeated bank runs and the national panic of 1907. Baradaran tells, “There had to be compromises in order for the proposal to pass. One of these was labeling them ‘the poor man’s banks’ and capping both interest rates and account balances to set bankers at ease that they would not compete.”

In 1910, the United States Postal Savings System was born. It was an immediate success with 32 million in deposits by 1913. As predicted, Southerners and Westerners who had taken to relying upon “stocking banks,” the equivalent of cash stuffed under the mattress, used the system. Unexpectedly, recent immigrants in urban areas flocked to it as well. Their familiarity with the concept undoubtedly helped. Then, as now, postal banking was common and trusted throughout Europe.

But we don’t have it today. What happened?

In the 1950s postal banking became unattractive as banks—rendered stable by the advent of Federal Deposit Insurance—offered higher interest on deposits. Federal regulation prevented conglomeration, and credit unions, thrifts and community banks thrived. In other words, the poor had access to banks that served their needs. “In 1966, as part of President Johnson’s streamlining of the federal government, postal banking was abolished,” Baradaran says. “The only opposition came from postal workers unions worried about job loss.”

When the banking sector was transformed starting in the 1970s by “both market changes and a strong tide of deregulation,” however, a merger wave “squeezed the community banking model and public-serving, limited-profit financial institutions were forced to merge and abandon their missions for more lucrative markets in order to survive.” They left behind unprofitable locations and customers, creating “banking deserts.”

With both the community banks and postal banking gone, fringe lenders and service providers sprang up to fill the void. Many of us can't recall a world without check cashers and payday lenders on the corners in impoverished neighborhoods, but prior to 1980 you would have been hard-pressed to find one.

Unfortunately, most policy wonks who understand this history and the resulting inequity throw their weight behind reviving and supporting community banking. Not so Baradaran: “I think we should all loudly lament the loss of community banks, but in many ways, the genie has left the bottle. Large and national banking was the decisive winner. The question is how to move forward with a policy of financial inclusion.”

Postal banking provides an elegant solution. Because of the institution’s existing infrastructure, almost everyone would have easy access to a banking location, and online banking could follow. The post office already offers money orders and handles cash. Postal unions support restoration of banking services.

Though fees for accounts, transfers and loans would remain low due to the post office’s limited-profit mission, they would exist. One look at Amazon shows just how much revenue a low-margin, high-volume model can produce. The resulting profits could save the financially embattled post office and our democratic ideals all at once.

Hillary need only get on board with two political propositions to see it through. First, though banking services would be risk-free, lending will always result in defaults and losses. Loans could be priced accordingly, however, and Baradaran says,

for many reasons, including economies of scale and scope and positioning inside the federal bureaucracy, the Post Office can manage these costs. Just as the government has created, funded, and maintained mortgage and student loan markets, and the entire bank/credit apparatus, it can help create a small loan market, starting to even the credit playing field.

The second big sell is to the banks, mirrors the pitch made during the 1908 election, and goes something like this: “We aren’t taking your customers. You don’t want these accounts. You haven’t sought them, and you won’t. We aren’t touching your business.”

Check cashers, payday lenders and those who charge exorbitant amounts to send money back to parents or children in another country, on the other hand, be warned. We’re coming for yours.

She can prove that her realism doesn’t have to preclude making big promises. She can take a bold stand against corporate interests, and demonstrate how her knowledge of Washington can translate into real change for those who need it most.

Hillary should use postal banking to show the American people what she told them after her loss in New Hampshire: “Even if they are not supporting me now, I support them.”

Gail Cornwall is a former public school teacher and recovering lawyer who now works as a stay-at-home mother and freelance writer in San Francisco. Her work has been published online by the Washington Post, Salon, the Huffington Post, House Beautiful, and Scary Mommy, among others. You can find Gail on Facebook and Twitter, or read more at gailcornwall.com.

Gail Cornwall works as a mother and writer in San Francisco. Connect with Gail on Twitter, or read more at gailcornwall.com.