Behind the music on "Vinyl": Did you spot Joey Ramone on last night's episode? 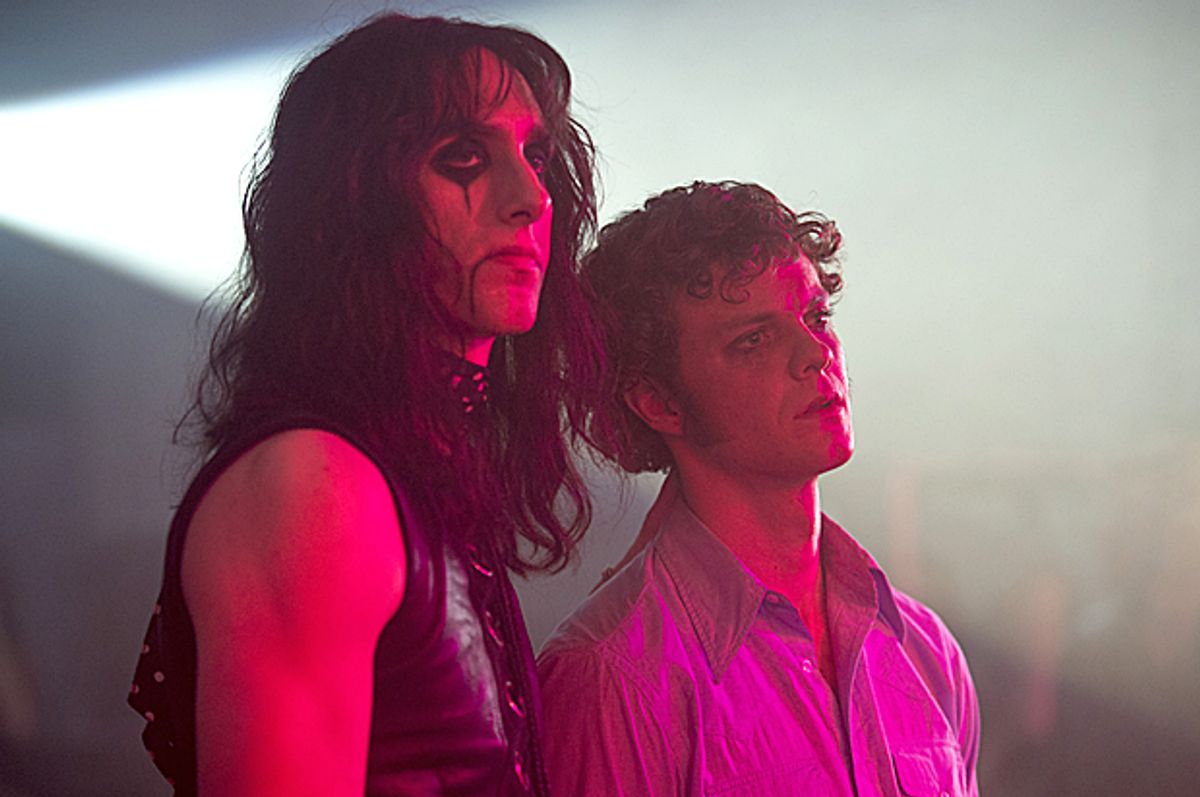 Dustin Ingram and Jack Quaid in "Vinyl" (HBO/Macall B. Polay)
--

The third episode of “Vinyl,” the Martin Scorsese drama about the music business in the ‘70s, opens in an opulent ballroom during an industry tribute to Maury Gold (Paul Ben-Victor), Richie Finestra’s (Bobby Canavale) mentor. Aside from the ridiculous amount of Yiddish tossed around, the notable element is the musicians appearing onstage as the action begins: they’re immediately and easily identifiable as the Raspberries. The Raspberries were a very successful power pop band from Cleveland who had a strong string of hits in the early ‘70s; you probably know “Go All The Way” and “Overnight Sensation.” They were known for their matching suits and short haircuts and were produced by a young guy named Jimmy Ienner. Their lead singer, Eric Carmen, went on to a solo career after the band broke up in 1975.

I love how every time Richie walks into American Century, he’s met by his long-suffering assistant with a message about what music writer needs to speak with him, as well as [insert well-known real life industry honcho] who wants to get in touch. This week, it’s a writer from Rock Scene and Walter Yetnikoff. In 1973, Yetnikoff was the president of CBS--big deal. But Rock Scene is the more interesting mention. Billing itself as “The Alternative to the Alternatives,” Rock Scene was the brainchild of Lisa Robinson and her husband Richard Robinson. They wanted to cover the growing glam scene in downtown New York, and modeled themselves more on women’s fashion magazines than any of the other straight-laced music publications (like Crawdaddy, Circus, Rolling Stone). While they definitely put the Who, Led Zeppelin, the Rolling Stones and other major acts on their covers, it also put the likes of the David Bowie, Marc Bolan, and later, the Ramones, Iggy Pop and the New York Dolls all over the inside (and later on the cover), back when no one else cared.

The tone of Rock Scene’s coverage was also gushier and more fan-friendly than, say, the sarcasm and inside jokes of Detroit’s CREEM magazine, and didn’t care about wearing its heart on its sleeve or playing clear favorites. So you’d get features like “The Ramones Help Danny Fields Move” or “At Home With David Johansen and Cyrinda Foxe.” Photographers included Bob Gruen and Danny Fields, and writers included Lisa, Richard, an advice column from “Doc Rock,” aka Lenny Kaye, guitarist and majordomo of the Patti Smith Group (who was also one of the main writers). But, see for yourself--some absolute mensch (see, I can do it too!) scanned the entire run of the magazine and put it online, free of charge.

Lester Grimes is back this episode, walking through the rec room at 1520 Sedgwick Avenue in the Bronx, the building Richie Finestra drove by in the pilot when he was trying to find a shortcut back to Connecticut. Here we see the source of the music that caught Richie’s ear: DJ Kool Herc is working on his technique, mixing “Funky Stuff” into “Jungle Boogie” into James Brown, and then into “Same Old Thing” by the Meters. These are many of the records that Herc used in the nascent days of hip-hop, where he began to experiment with isolating bass lines and other instrumental segments of songs, and segueing them together. “I don’t know that you’re making anything, but I do think that you’re trying,” Lester says. “Keep on, Herc.”

Meanwhile, Clark Morelle (Jack Quaid) from A&R is stuck in the studio with England Dan and John Ford Coley, who actually did exist, and were indeed that awful. (The song is “Simone,” if you want to confirm that for yourself--it actually came out in 1971, but the excuse here is that it’s being used for a soundtrack and has to be re-recorded.) Into the recording studio struts the answer to Clark’s dilemma on how he could find someone worth signing in the two-week ultimatum Richie gave to the entire A&R department: Alice Cooper (as played by Dustin Ingram), real name Vincent Furnier. The clothes are right, and the voice is reasonably accurate, as is “Alice”’s self-deprecating sense of humor. “We’re just coming off the number one album in the country,” Alice reminds Clark; this would be “Billion Dollar Babies,” which would be the band’s sixth and most successful album. But no, Clark wants to sign Alice to a solo contract: “The band’s just a bunch of guys standing behind Alice.” With that, Clark shoots himself in the foot, but doesn’t know it yet.

Clark plunges headlong trying to ingratiate himself with Alice, playing golf (which Alice really did/does), holding onto Alice’s snake (yes, there was a snake named “Eva Marie Snake,” part of the onstage props), and drinking and engaging in general debauchery. There’s a scene in what looks like an ornate hotel suite, with half-naked women and alcohol; you hear the MC5 and Brownsville Station (“Smokin’ In The Boys Room”) in the background. It might be cliché, except for the fact that noted rock and roll courtesan Bebe Buell describes a scene just like it in her memoir: Alice Cooper’s girlfriend was sleeping with Johnny Thunders while Alice was on tour. Bebe had been hanging out with Alice’s girlfriend, who gave Bebe too much THC at a party, and Bebe’s boyfriend Todd Rundgren (who you may remember Alice name-checked in an earlier scene) had to come to rescue her. (Johnny Thunders’ Queens accent is awful, however.)

The denouement of the Clark-courts-Alice scene is hilarious: Clark placed into the on-stage guillotine that was a key part of the stage show as revenge for Richie standing up a young and hopeful Alice Cooper Band who dropped everything and flew to New York for an audience. The most unrealistic thing about that scene is the hall is too small; Alice Cooper was selling out arenas at this point.

Now we come to the big event: the Nasty Bits — remember them? — are auditioning for the label honcho! “Who’s the nutter in the figure skating costume?” Kip (James Jagger) asks Jamie (Juno Temple), of the tall, lanky gentleman leading the current band onstage, wearing a black jumpsuit adorned with rhinestones. “Jeff Starship,” Jamie informs him. “He should board a bloody starship,” is Kip’s response.

You might be tempted to write this off as background, unless you know that Jeff Starship was the stage name of the lead singer of a real band called Sniper who was part of the NYC glam scene and played at the Coventry. He was known for his elaborate costumes, including a custom-made black jumpsuit onstage. Jeff Starship’s real name was Jeffrey Hyman, who would later be known to the world as none other than Joey Ramone. Look at the scene again, and it’s a persuasive tableau; the hair, voice, and onstage demeanor of “Jeff” feel familiar enough. It’s all the more impressive when you realize that there are no existing photographs of Sniper or Jeff Starship.

With that noted, however, one has to ask: If “Vinyl” can diligently research and pursue such a minor background plot point--they could have staged the scene without a band at all--why on earth was the same diligence not exercised for Led Zeppelin or the Velvet Underground, who had more screen time and are arguably more recognizable to the general public? The IMDB entry for “Vinyl” has a listing for David Bowie--which, quite frankly, is mandatory for the show to maintain any historical accuracy--but given the track record after three episodes, one shudders to consider how well that will work out.