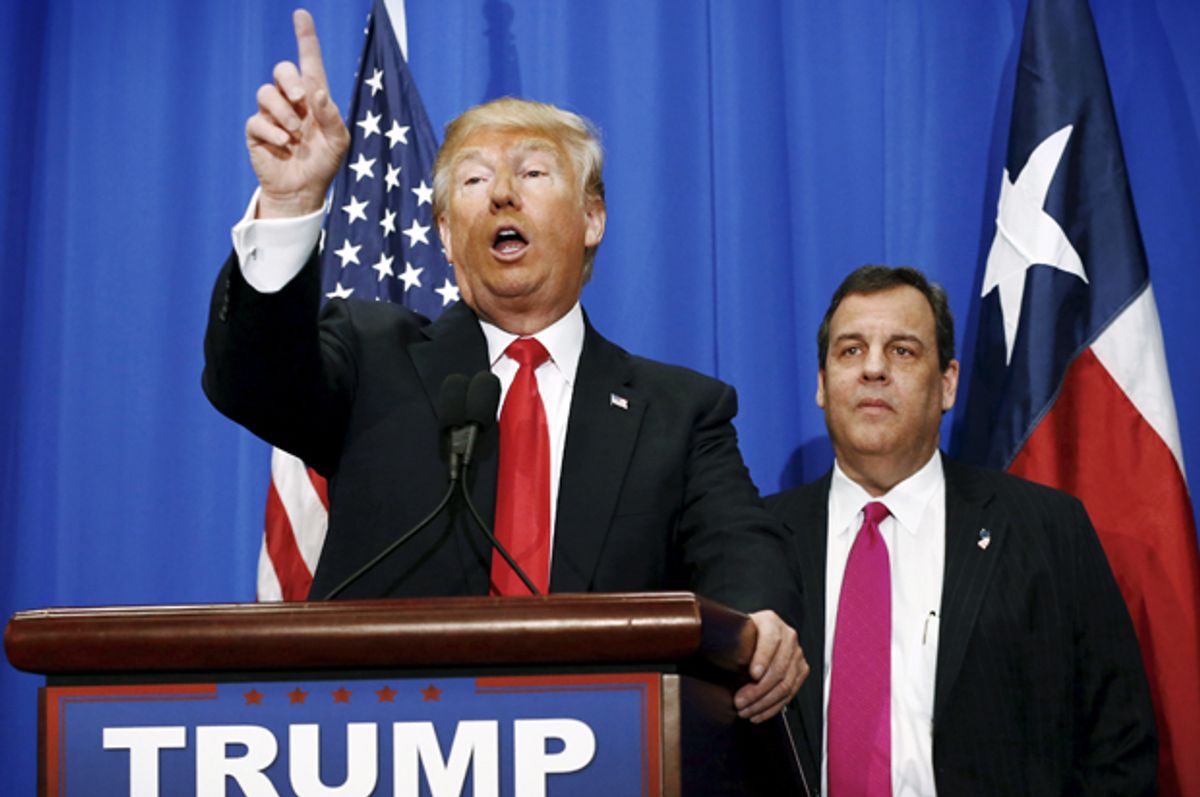 Donald Trump and Chris Christie, at a campaign rally in Fort Worth, Texas, February 26, 2016. (Reuters/Mike Stone)
--

It’s not easy to feel sympathy for New Jersey Gov. Chris Christie, but for a long time I thought he was getting something of a raw deal from Republicans who called him a traitor to the party. According to popular conservative legend, Mitt Romney was on his way to a smashingly decisive victory in the 2012 election before Christie gave Barack Obama a hug and a photo op as the two surveyed the damage Superstorm Sandy wrought upon the Jersey shore. Obama got to look “presidential” thanks to Christie, the thinking goes, and that gave him the bounce he needed to eke out a large and decisive win over Romney.

Now let’s jump ahead to just a few weeks ago, when Christie, his presidential hopes fading ahead of the New Hampshire primary, tore into Marco Rubio on the debate stage and painted him as a robotic talking-points machine. The exchange wounded Rubio, who finished fifth in the state and saw his entire campaign thrown into a tailspin. Once again, conservatives were outraged, attacking Christie for tearing down the brightest Republican presidential prospect for no discernible reason (Christie finished poorly in the state and suspended his campaign shortly thereafter).

The rap on Christie came to be that he’d twice betrayed the party out of self-interest. But that wasn’t really fair – on Sandy he was just doing the job of the governor, and in New Hampshire he was just trying to win like everyone else. Romney and Rubio stumbled because they were flawed candidates, but conservatives wanted to believe that Christie had some sort of anti-GOP vendetta.

Well, with Christie endorsing Donald Trump last week, now they have an actual reason to believe that. There’s no way to view Christie’s support for Trump as anything but a political betrayal motivated by self-interest and undisguised animosity toward Marco Rubio.

As a practical matter, Christie’s value to the Trump campaign is mixed. He’s an enthusiastic attack dog and he has chummy relationships with people in the national media (though Trump shares those characteristics as well). On the other hand, his presidential campaign had vanishingly little support in the polls prior to his dropping out, and he’s extraordinarily unpopular in his own state, which votes late in the primary and is already solidly pro-Trump. And there’s also a long trail of comments from Christie from when he was still a candidate attacking Trump as unqualified and aggressively dismissing the more authoritarian portions of Trump’s policy platform. Christie said Trump’s proposed ban on Muslim immigration is “the kind of thing that people say when they have no experience and don't know what they're talking about,” which will be tough to explain away.

As a matter of political symbolism and timing, though, Christie’s backing of Trump was a brutal and unexpected hit on the Republican establishment. A sitting Republican governor and former chair of the Republican Governor’s Association undercut the party establishment’s preferred nominee at one of the worst possible moments.

As last Friday dawned, Rubio was basking in celebratory media coverage of his debate-night mockery of Trump. Establishment Republicans and conservative pundits were pumped that finally – FINALLY – someone was getting rough with Trump, and Rubio wanted to ride that wave of positive coverage and adulation to a better-than-expected finish in the Super Tuesday states tomorrow. Christie stomped all over that and made himself and Trump the story. He launched still more barbed insults at Rubio, calling him unprepared to be president, and he revived the memory of how he provided the gasoline for Rubio’s self-immolation in New Hampshire. The whole episode made for a bizarre role-reversal in which Rubio ended last week joking that his opponent had peed himself on the debate stage, while Trump rolled out the endorsement of a high-profile establishment Republican.

Christie, meanwhile, got his revenge on Rubio, whose super PAC fired off anti-Christie ads in New Hampshire in the week leading up to the primary. And now he’s positioned to snag a high-level appointment with the Trump administration, should the country lose its goddamn mind and actually elect this lunatic. Christie’s political calculation was probably pretty simple – his political prospects going forward were not looking good as an unpopular blue-state Republican who flopped as a presidential candidate, so signing on with Team Trump offered a better shot at rebuilding his own relevance. And since a good portion of the party already considered him a two-time presidential saboteur, Christie probably figured he may as well embrace the role.