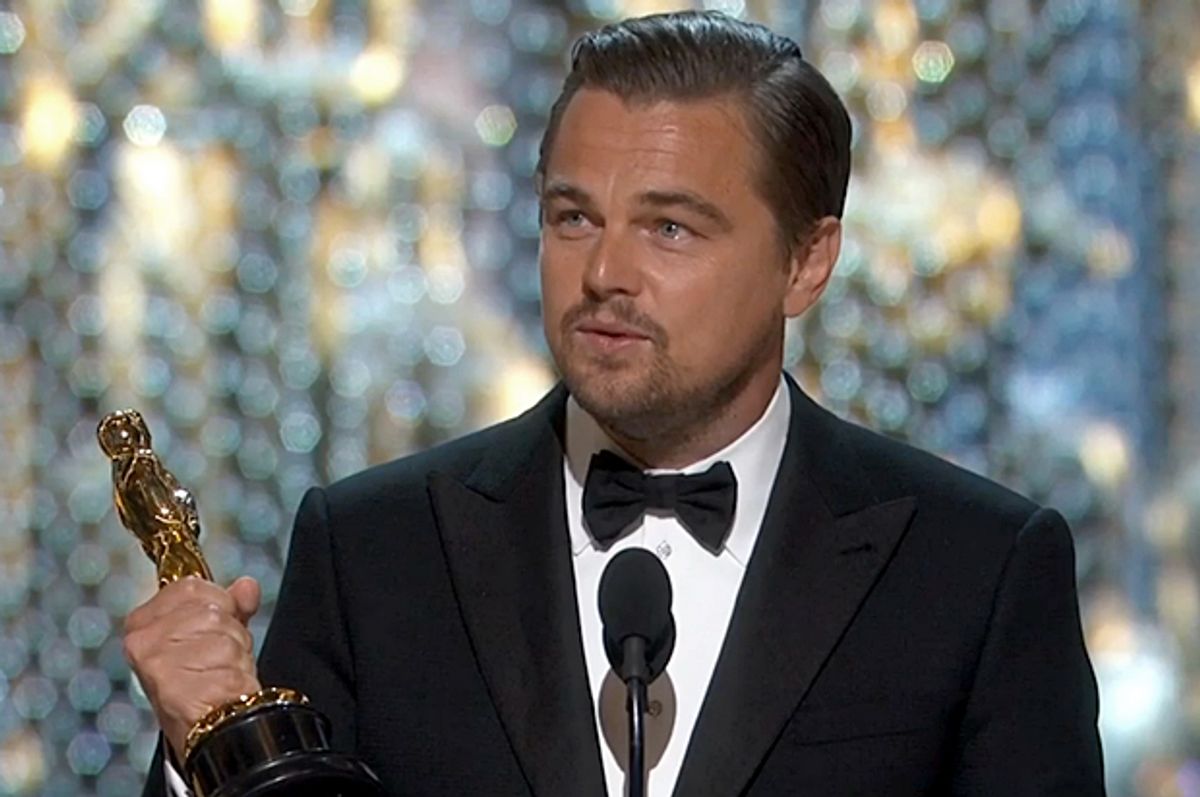 “Tom Cruise,” film critic David Thomson wrote in a 2010 tribute, “is 48.  At that age, Gary Cooper had just made 'The Fountainhead,' Bogart had done 'The Big Sleep,' and Montgomery Clift … well, he was dead.”

Leonardo DiCaprio is 41, and he has done more good work than Tom Cruise had at that age. In fact, DiCaprio had done more great work by age 31, by which time he had already made "This Boy’s Life," "What’s Eating Gilbert Grape," "Total Eclipse," "Romeo + Juliet," "Titanic," "Catch Me If You Can," "Gangs of New York," "The Aviator" and "The Departed."

Now that DiCaprio has won his first Oscar on Sunday night (of five nominations) it might be time to toss this question out: Is Leonardo DiCaprio the greatest movie star ever? Has he given more excellent performances in more critical and financial hits than Clark Gable, Cary Grant, Cooper, Bogart, Jimmy Stewart, Henry Fonda, Paul Newman, Jack Nicholson, Denzel Washington … or anybody?

Before you answer that question, consider that since turning 31, you could add to DiCaprio’s film list "Blood Diamond," "Shutter Island," "Inception," "The Great Gatsby," "The Wolf of Wall Street" and, now, "The Revenant."

Over the last 20 years, there have probably been bigger box office stars, but surely DiCaprio would have topped Cruise and Johnny Depp if he had played it safe with "Mission Impossible" or "Pirates of The Caribbean" or some other bloated and predictable franchise film.  No other star with DiCaprio’s kind of leverage has taken such enormous chances  — and scored such enormous payoffs.

In his first professional job at age 5 – or so the legend is printed  –  he was kicked off the set of "Romper Room" for being disruptive.  The next 15 years or so may seem like the inevitable arc of a gifted child star – commercials that practically made his face recognizable before high school.

In his teens, a slew of parts in TV shows and bad movies like "Critters 3" followed. Lots of teen actors have similar careers.  The astonishing part for DiCaprio was what came next.

When he was 18 he was cast as the stepson of a psychotic bully played by Robert De Niro in "This Boy’s Life," based on Tobias Wolff’s memoir about a teen coming of age. De Niro was astonished by the kid’s talent and assurance. According to Martin Scorsese, De Niro told him, “I'm working with this young kid. He's really good. You should work with him sometime. His name is DiCaprio.”

"This Boy’s Life" was released in 1993.  In that same remarkable year, DiCaprio stole scenes from another veteran movie actor, Johnny Depp, playing his autistic younger brother in "What’s Eating Gilbert Grape?" Janet Maslin wrote in the New York Times, “But the film's real show-stopping turn comes from Mr. DiCaprio, who makes Arnie's many tics so startling and vivid that at first he is difficult to watch … The performance has a sharp, desperate intensity from beginning to end.” Playing Arnie earned him his first Oscar nomination.

Someone – I don’t know who since many people claim to be the first to say it – later asked rhetorically, “Didn’t this kid have an awkward phase?”

In 1995 he stole scenes from another Oscar winner, Gene Hackman, in the Sam Raimi western "The Quick and the Dead." The same year he starred in "The Basketball Diaries," playing a junkie so convincingly that Newsday’s Gene Seymour wrote, “He’s too good an actor to be a star.”

A gay teen, an autistic, a gunfighter and a junkie – all roles he took on before his 21st birthday.

David Thomson wrote of Tom Cruise’s daring when he signed on for Paul Thomas Anderson’s 1999 masterpiece (Thomson’s word) "Magnolia": “By agreeing to play Frank Mackey, leader of a hysterical male cult yet also the lost son of a great parable of lost angels, Cruise showed the courage I think we all grant him.” I’m not sure Cruise showed all that much courage in accepting the role, but it was daring and he was very good.

But in 1999 Cruise was 37 and DiCaprio 21. How much courage did it take for Leo to play Arthur Rimbaud opposite David Thewlis’ Paul Verlaine in "Total Eclipse"? (Directed by Agnieszka Holland, most recently of "The Wire" and "House of Cards.")  DiCaprio’s performance is an astonishing piece of work, one of the few times on film when an actor’s personality has suggested the spirit and depth of a great poet. With all due respect, it was simply beyond the range of River Phoenix, who was cast for the part but died before filming began.

A scene where he stands on a table and rants while trashing the work of a roomful of established (and now mostly forgotten) French poets is a bit of breathtaking bravado. It is so far beyond the range of Tom Cruise or Johnny Depp or any other American film actor of our time as to make you wonder if it’s not the greatest performance ever by so young an actor. It’s one of the greatest and, amazingly, least seen film performances of the last 50 years.

Popular young actors are supposed to spring out of television series or so-called franchise films and then slide into a comfortable stretch of sequels, occasionally veering off into “character” parts as they settle into middle age. But Leo was already doing the character roles before "Titanic" launched him into superstardom in 1997.

If Thomson was correct in commending Cruise’s courage for playing a part that might be seen as a version of himself (and Thomson was correct, I think), then how much courage did DiCaprio, then 24, show in 1998 playing a snotty, self-absorbed hedonist – surely the perception of Leo often proclaimed  in supermarket tabloids – in Woody Allen’s "Celebrity"? The film was surely an inspiration for the HBO series "Entourage"; look closely in "Celebrity" and you’ll even see Adrian Grenier in Leo’s entourage.

Four years later, he was as smooth as Cary Grant in "To Catch a Thief" in Spielberg’s "Catch Me If You Can" (but Grant was 51 when he made that film).  The comfortable cool that emanates from this performances is 180 degrees from his Rimbaud in "Total Eclipse," but the two performances have one thing in common: You can’t think of any other actor who could have played the part as well.

2002 also saw him begin his collaboration with Martin Scorsese in "Gangs of New York," where he attempted the only mountain he could not scale, a matchup with Daniel Day Lewis. But DiCaprio was 27, and I wouldn’t rule out a closer showing should the two be paired again, particularly if DiCaprio gets to play a role more fully written than Amsterdam Villon.

After "Titanic" became the most popular movie ever made, DiCaprio seemed to mock his own success in words that didn’t come from any publicist: "I had no connection with me during that whole 'Titanic' phenomenon, and what my face became around the world … I’ll never reach that state of popularity again, and I don’t expect to.”

He’s taken roles like the one in "Revolutionary Road" because the character, he said, “was unheroic and slightly cowardly.” (Though no doubt he wanted to work again with close friend Kate Winslet.)  What’s amazing is how many roles since "Titanic" have resulted in financially successful films despite such daring choices as "Inception." “Once upon a time” writes Thomson, “Cruise would have been in 'Inception.'”  True — but he wouldn’t have been as good, and he would have shrunk when paired with Tom Hardy.  There was, of course, that otherwise unwatchable sludge of a Clint Eastwood film, "J. Edgar," a movie that he surely must have known had no chance at the box office regardless of how good DiCaprio was.

Then there was his turn as Baz Luhrman’s "Gatsby." Suspend, for the moment, all questions of what you thought of Luhrman’s interpretation of Fitzgerald’s novel and admit, at least this: When DiCaprio turns on the balcony, extends his hand and says, “I’m Gatsby,” you saw for the first time what Fitzgerald must have seen when he conceived the character.

Would it have been terribly unfair if Leo had taken home the gold statue for "Wolf of Wall Street"? Perhaps not in the same year  Matthew McConaughey won for "The Dallas Buyers Club," though even McConaughey might have had trouble outdoing Leo rant-for-rant. When he jumped on that desk to deliver his hysterically funny rant, did it cross anyone’s mind that he was cribbing from the scene in "Total Eclipse" 18 years earlier?)

In the lead-up to the ceremony, I heard some carping about DiCaprio’s worthiness for the best actor award.  Is his work in "The Revenant" the best he’s ever done?  Perhaps not, but then he wouldn’t be the first actor to receive an Oscar for work that wasn’t his best performance. Was Paul Newman’s in "The Color of Money"? Dustin Hoffman’s best performance certainly wasn’t in "Rain Man"; in fact, I’ll give Tom Cruise the nod over him for that one. Was Pacino’s best in "Scent of a Woman"? Denzel Washington in "Training Day"?

The real surprise, when we look back on DiCaprio's career so far, is that this is the first Oscar he's won. But given the power he now wields at age 41 and his uncanny ability to select directors and roles, it’s almost scary to think what he’s capable of doing in the next 10 years or so.