Oscar has issues: In an acerbic, awkward evening loaded with noble causes, #WhiteStarsMatter

Chris Rock wrestles with Hollywood racism, Joe Biden goes Gaga and Leo turns rebel with a cause. It almost worked! 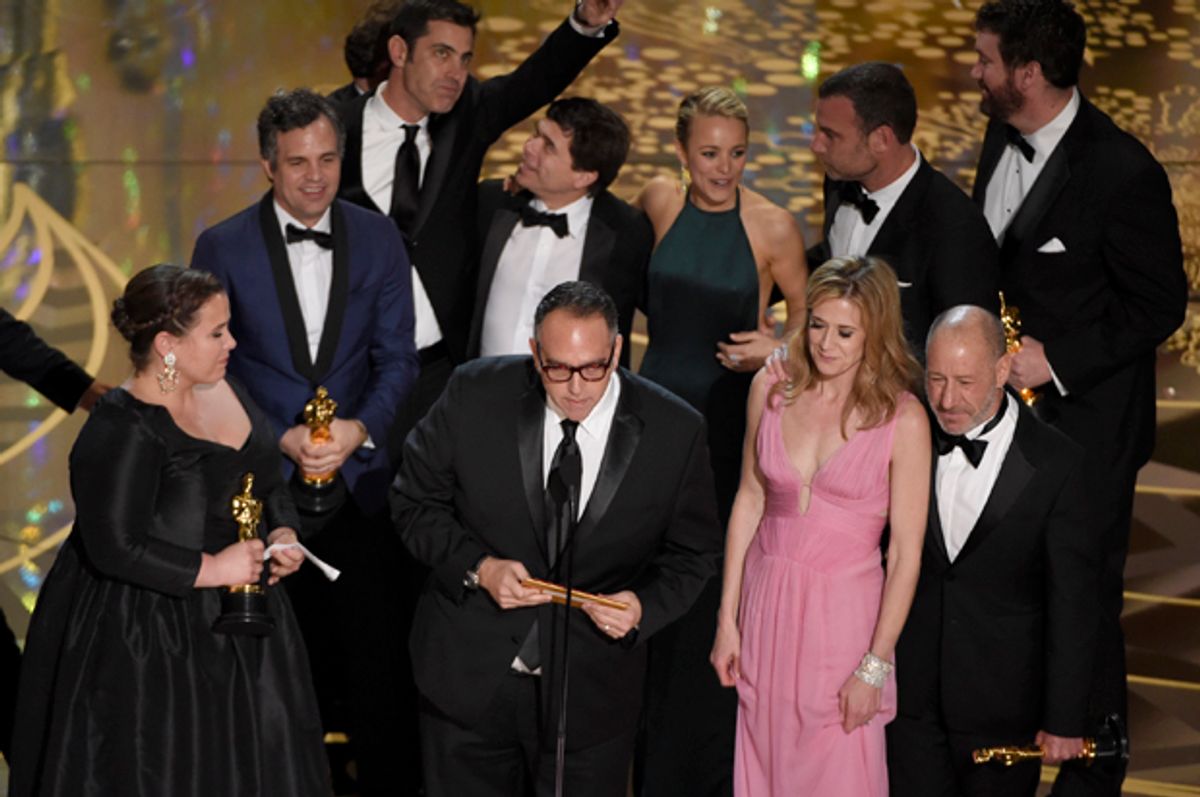 Cast and crew of “Spotlight” accept the award for best picture at the Oscars. (AP/Chris Pizzello)
--

Every Oscar telecast is pretty awkward. It’s a four-hour variety show featuring the stars of a bunch of movies the viewers haven’t seen. These highly paid performers, attired in ghastly getups at vast expense, then read their lines off Teleprompters with a dazed demeanor reminiscent of the fourth-place finisher in a sixth-grade talent show, or someone asking for directions at LAX after a 17-hour journey in the fuselage of an Airbus.

So it wouldn’t be fair to claim that the 2016 Oscars hosted by Chris Rock — hereafter to be known as Oscars With Issues, or OWI — were the most awkward of all. That would undersell the trying-too-hard-and-digging-myself-deeper Oscars of Seth MacFarlane in 2013, or the Pod People Oscars of 2011, when James Franco and Anne Hathaway periodically seemed to forget why they were there, what event they were theoretically hosting and what planet they were from. (It clearly wasn’t Earth.) I know you had gratefully forgotten about both of those events, but don’t worry. You’ll forget them again before you’re done reading this.

Whatever else it may have been — draggy, uneven, overly earnest and overloaded with techno-contempo graphics that suggested we were watching the WNBA draft on ESPN2 — OWI was not forgettable. (I’m willing to bet that lower-deck crawl, allowing winners to thank their agent’s receptionist, their former analyst and their kid’s lizard’s veterinarian, is something we won’t encounter again.) There’s no denying that Sunday night’s extravaganza, which extended into Monday morning on the East Coast, had moments of peak awkwardness, accentuated by the intense worldwide scrutiny focused on this year’s ceremony after two straight years of all-white acting nominees and the #OscarsSoWhite furor.

Some of that awkwardness was instructive, as in the taped segment where Rock interviewed African-American moviegoers in Los Angeles who had not seen or even heard of “Bridge of Spies” or “Brooklyn” or “Spotlight,” the ultimate best-picture winner. And some of it was just so awkward it will still seem deeply embarrassing when dug up 100,000 years from now by an alien insectoid species who do not understand what we mean by “race,” like the vice-principal-esque speech by Academy head Cheryl Boone Isaacs, who simultaneously dissed the current membership for not doing enough to further diversity while making no specific promises about the future.

Let’s put it this way: Any pop-culture event where Vice President Joe Biden has one of the better moments is in deep trouble. I’m not saying I wasn’t moved by Biden’s genuine-sounding tribute to the courage of women and men who have survived sexual assault, or by Lady Gaga’s stark ensuing production number, a Tori Amos-style performance of “Till It Happens to You” accompanied by a chorus of survivors. But Biden’s standing-O underscored recent rumors that some people in the Hollywood donor class are still pining for the current veep to run for president, because they don’t think either Bernie or Hillary can win. (Don’t get me started on that one! But they might be right.) Whether that makes Hollywood look desperate or the Democrats look desperate I’m not sure. Probably both.

Shortly after the Biden-Gaga moment, which in terms of emotion and communication was probably the highlight of the whole evening, you could almost hear the collective culture-wide groan as we learned that Academy members had instead given the best-song Oscar to mediocre English R&B singer Sam Smith for “Writing’s on the Wall,” the lamest and least Bond-like of all James Bond theme songs. I’m not saying “Till It Happens to You” is some pop masterwork, qua song, but this was an easy call, Oscar people. At this point, it feels like Academy members commit P.R. blunders on purpose. They’re sick and tired of people perceiving them as culturally significant; they’re a bunch of old white guys who play too much cribbage and they’re gonna own it. Hell, it’s 4:35 p.m. somewhere — let’s bust out the Chardonnay!

Smith sought to redeem the moment by boarding the OWI express after his own fashion, and I think the English accent made people believe, for a second or two, that he might be right about being the first openly gay man to win an Oscar. (Dustin Lance Black, Elton John and Stephen Sondheim might beg to differ, and there are almost certainly others. How closeted Joel Grey ever was is a semantic question.) In all seriousness, let’s take a minute to observe how far the world has turned: An out LGBT person winning an Oscar is pretty much a footnote in an evening that featured a production number about rape, a best-picture winner about the sexual abuse scandal in the Catholic Church (a mild but welcome surprise, after all the back-and-forth), an impassioned speech about climate change from Leonardo DiCaprio, a broadside fired directly at Hillary Clinton by “Big Short” writer-director Adam McKay and a tone of racial unease from beginning to end.

No doubt I oversold Chris Rock’s degree of readiness to play OWI host in a setup piece the other day, because nobody can be entirely prepared for a job as thankless as this. But compared to a whole bunch of recent Oscar hosts, I think Rock did OK — way better than the duds like MacFarlane or Neil Patrick Harris, but not quite as effortless as a true song-and-dance man like Hugh Jackman. His acerbic opening monologue took on both the polite, liberal racism of Hollywood and the self-righteous calls for a boycott from some quarters. If it felt hit-and-miss when watched live, it actually reads better on paper, and stays true to Rock’s comic persona as outsider and commentator rather than advocate.

At the tail end of Rock’s monologue he got serious about the limited opportunities afforded black actors, but along the way he gave Will Smith and Jada Pinkett Smith, self-appointed leaders of the Oscar boycott, a pretty rough ride. “Jada’s gonna boycott the Oscars?” Rock asked. “Jada boycotting the Oscars is like me boycotting Rihanna’s panties. I wasn’t invited!” If Will Smith found it unfair that he didn’t get nominated for his role in “Concussion” (a movie that found almost no audience), Rock suggested it was unfair that Smith got paid $20 million for the notorious 1999 flop “Wild Wild West.”

Rock’s orchestrated bit with the African-American Girl Scouts roaming through the audience selling cookies felt like it was coming straight from the heart, but also like one of those ideas that sounded great in the writing room but didn’t connect on live TV. His man-on-the-street footage with black moviegoers in Compton, which I mentioned earlier, was highly effective and spoke to a damaging weakness in the entire Oscar economy that goes well beyond race: For a whole complex of historical and cultural reasons, the Academy almost never honors movies that ordinary people choose to see in large numbers. A lot of those movies are crap, and a lot of folks in Hollywood feel disdain for the products that sustain their industry. But the problem actually goes deeper than that, and represents a contradiction that clearly threatens to undermine the entire business model of American cinema.

Let’s be clear about the fact that Rock’s role on Sunday night was to make everything seem OK, and to reassure viewers that whatever unpleasantness they may have heard about on social media, the Hollywood state of the union was A-OK. Such reassurances are transparently bogus, but Rock was successful enough that OWI transmogrified from the #OscarsSoWhite pageant into a broader and less coherent assemblage of supposedly important stuff. If something as diffuse as the Oscar telecast can ever be said to have a point, the point of this one was that despite Hollywood’s moneyed isolation from real life and cultural schizophrenia and possible or plausible racism, the rich people who make movies care about the Big Issues.

In a sense, Rock’s job was to clear the cobwebs from the stage so the winners could claim the bully pulpit, a glorious Oscar-night tradition. If Biden and Gaga were an anomalous but compelling duo, we also heard Adam McKay deliver his barely concealed Bernie Sanders commercial — the “Big Short” director is one of the Vermont senator’s biggest Hollywood boosters — two days before the likely #BernMageddon of Super Tuesday. And Leo DiCaprio at last completed his ascension into the firmament of Oscar-winning stars with a Cause. I’m not suggesting there is anything insincere about DiCaprio’s is insincere commitment to climate change. His speech was terrific, and of course he’s right that it’s a critical issue. But the ultimate message of OWI, on many levels, was that #WhiteStarsMatter.