Oscars' biggest upset: Why Stallone’s surprising loss was the shock the Academy needed 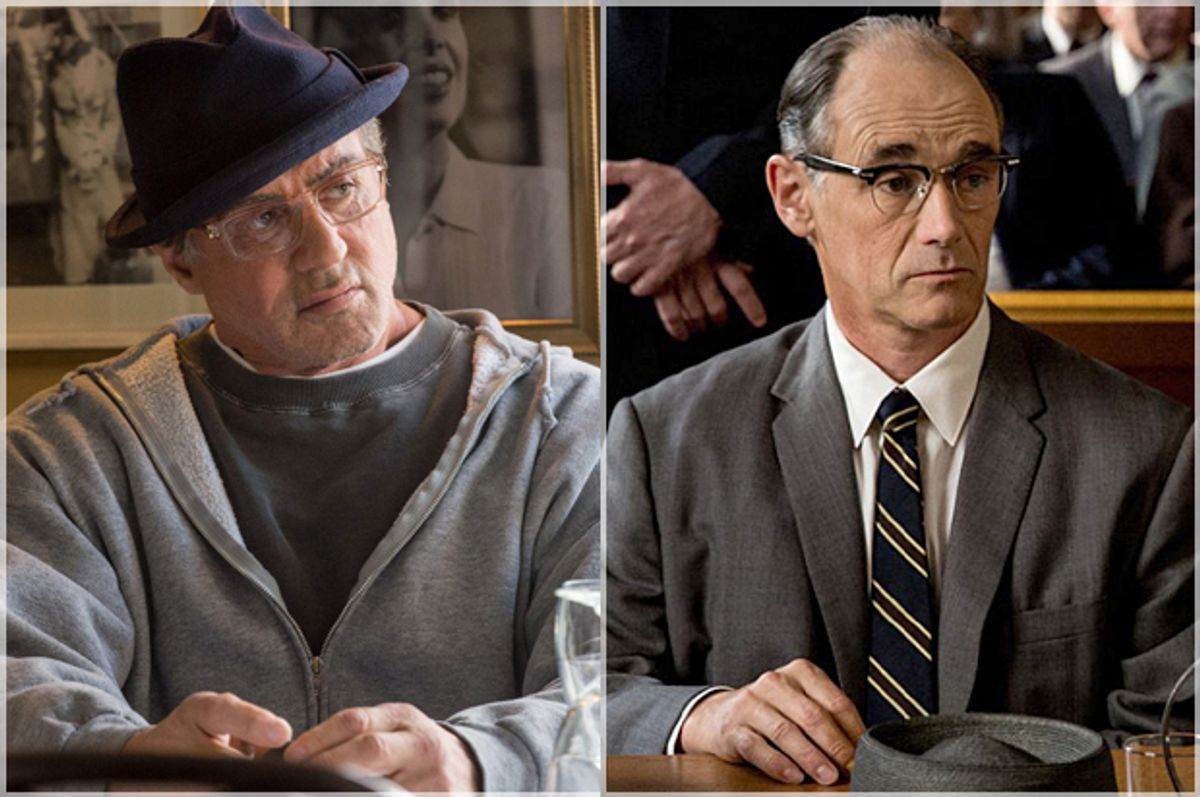 Sylvester Stallone in "Creed," Mark Rylance in "Bridge of Spies"
--

Something quietly revolutionary happened at the Oscars last night: They were revolutionarily quiet.

Going into the ceremony, the major focus was on host Chris Rock’s opening monologue and his response to criticism of the Academy Awards for lack of racial inclusion. (He did OK.) But this was also one of the most hotly contested Oscar years in recent memory, one without a clear frontrunner for most of the race: “The Revenant” had the most nominations and won the BAFTA, but “The Big Short” was the victor at the Producer’s Guild and “Spotlight” took the SAG. “The Revenant” was favored to win by bookies, but it was anyone’s race.

That trophy ended up going to “Spotlight,” Tom McCarthy’s hard-nosed Catholic sex abuse drama. The film’s unexpected win capped off an evening that favored the restrained over the grandiose. In the evening’s most shocking moment, Mark Rylance (“Bridge of Spies”) prevailed in the Best Supporting Actor category over Sylvester Stallone (“Creed”), a sentimental favorite of many Oscar voters due to his long-running role in the Rocky franchise. Stallone won at the Critics Choice Awards and the Golden Globes and was widely expected to repeat here. On Gold Derby, pundits favored the 69-year-old actor by 76 percentage points. Rylance was all the way down in third, behind Mark Ruffalo (“Spotlight”).

It might not have been the popular choice (or the easy one), but the Oscars absolutely made the right call. Sylvester Stallone’s performance was seemingly tailor-made to appeal to awards voters: He’s a beloved veteran launching his bid for a comeback in the part that made him famous. “Creed” finds an aging Rocky Balboa (major spoiler alert) battling cancer while training his nemesis-turned-friend’s estranged son. A scene where an ailing Rocky climbs the stairs of the Philadelphia Art Museum, which you might remember from the original film, might as well blink “OSCAR REEL” at the bottom of the screen.

This is not to denigrate the strength of Sylvester Stallone’s bruisingly effective performance, easily his finest on-screen turn to date. He’s so good in “Creed” that it makes one wonder the actor Stallone could have been if he hadn’t whittled away most of his career trying to one-up Arnold Schwarzenegger. Until his ‘80s downturn, Sly had never appeared in a movie that wasn’t well-received by critics: According to Rotten Tomatoes, his first critical misfire didn’t come until his unlucky 13th film back in 1983, when he helmed the disastrous “Saturday Night Fever” sequel, “Staying Alive.” As much as “Creed” makes one wistful for the early, good “Rocky” movies, it suggests what could have been if Stallone had chosen a different path.

But while nostalgia can be a powerful emotion, it shouldn’t be the reason someone is handed the year’s most prestigious acting award. Many might suggest that Sylvester Stallone didn’t win because of statistical factors and the Academy minutiae that too often determines victors: Stallone wasn’t nominated for the Screen Actors Guild award, one of the strongest predictors of success on Oscar night. Four of the last five Best Supporting Actor winners were chosen by SAG. However, SAG voters didn’t even go for Mark Rylance; they selected Idris Elba (“Beasts of No Nation”) instead, who didn't receive an Oscar nod.

Vulture’s Kyle Buchanan, meanwhile, suggests that Stallone’s loss signaled the fact that nostalgia has limits. “While industry observers touted Stallone’s comeback narrative as irresistible, I kept talking to actual Hollywood insiders who weren’t that enamored of Stallone as a person over his few decades in show business, and consequently withheld their vote,” Buchanan writes. “It’s a problem that afflicted other Oscar nominees like Mickey Rourke, Lauren Bacall, and Burt Reynolds, who learned that a comeback narrative can only take you so far: If the voters don’t actually want to see you on that stage, you won’t make it up those steps.”

But aside from statistics and personal politics, there’s a simpler, better reason Mark Rylance won: He deserved it. Rylance, soon to voice the title character in Steven Spielberg’s adaptation of the beloved Roald Dahl novel “The BFG,” is one of the most acclaimed and distinguished theater actors on the planet. Rylance has won three Tony Awards, including for “Twelfth Night” and “Jerusalem,” and has often been called the greatest actor of his generation. He’s been long overdue for his breakout role in film.

And what an incredible breakout it was. In Spielberg’s “Bridge of Spies,” Mark Rylance plays Rudolf Abel, a hapless Soviet spy apprehended by the American government after receiving a message from the Russian government. Rylance is an ideal foil for Tom Hanks, doing his usual Jimmy Stewart thing as James B. Donovan, the lawyer assigned to his case. Whereas Donovan is befuddled and angry, trying to give his client the best possible defense in a system that wants to deny Rudolf Abel his basic rights, Abel is comically composed. When Donovan asks if anything ever gets to Abel, he responds, “Would it help?”

It’s rare to see an actor do so much with so little. Imagine you were an artist entrusted to paint a portrait of a man standing in front of you. Instead of being given every possible pigment on your palette, you’re only allowed brown and white. How do you depict the fullness of a human life with just two colors? Such is the case with Mark Rylance: He’s extraordinarily controlled, hinting at the complex inner life of a stoic, nearly unknowable man just by raising his eyebrow. Rylance gave what was not just one of the best performances of the year but what had to be one of the most extraordinarily difficult.

What’s so surprising about Rylance’s victory isn’t that many people thought the award would go to Stallone but that it’s the kind of thing that never wins Oscars. The Academy likes its nominees to go big or go home. In many cases, the eventual winner is not the person who has done the best acting in the category but the most acting. This is absolutely true of winners like DiCaprio and Brie Larson (“Room”), who were both very good but also gave big, showy performances that the Academy tends to favor. In “Room,” Larson is asked to do nearly everything one can ask of an actor—she’s funny, sad, sweet, and angry all in the course of 100 minutes. It’s “capital-A” acting at its finest.

That “everything but the kitchen sink” mentality often overlooks smaller, quieter performances that are arguably even more challenging, a fact Rooney Mara should know well. This year, Mara was nominated for her truly stunning work in Todd Haynes’ “Carol.” The 31-year-old played Therese Belivet, a shy salesgirl who strikes up a relationship with an older woman (Cate Blanchett) in the middle of a divorce. Belivet tends to speak in a tone that’s barely above a whisper, and Mara’s performance is all about the power of her gaze—a look that conveys years of unspoken longing. She won Best Actress at Cannes but was steamrolled by the Vikanderssance, as the Swedish actress nabbed nearly every award in sight for “The Danish Girl.”

The problem with Rooney Mara’s campaign is the same that plagued her in 2012, when she was nominated for playing Lisbeth Salander in David Fincher’s American remake of “The Girl With the Dragon Tattoo.” What do you choose for her Oscar clip? What’s the “big moment” that defines her performance? The same situation likely faced the Academy editing team when putting together a highlight reel for Saoirse Ronan (“Brooklyn”). In a movie that deals with themes of homesickness and longing, most of Ronan’s performance takes place internally.

In a year where the conversation has focused heavily on diversity, it’s a refreshing change of pace to see the Academy recognize diverse kinds of acting, ones that challenge the notion of what an “Oscar performance” is. What’s held the Academy back for so long is an incredibly rigid notion of who qualifies for recognition and why—whether that’s in terms of race, sexual orientation, ability, or even performance. Every year, too many fine actors—from Michael B. Jordan and Idris Elba to Michael Keaton—are passed over simply because it’s not the kind of thing the Oscars like. It’s time to rewrite that script.

Celebrating Mark Rylance’s win may not be the fullest realization of the change that the Academy needs, but in an ugly, awful, embarrassing year, it’s something.