The "Spectre" winner half-recalled a quote from Ian McKellen, didn't look it up—but still ran with it on stage 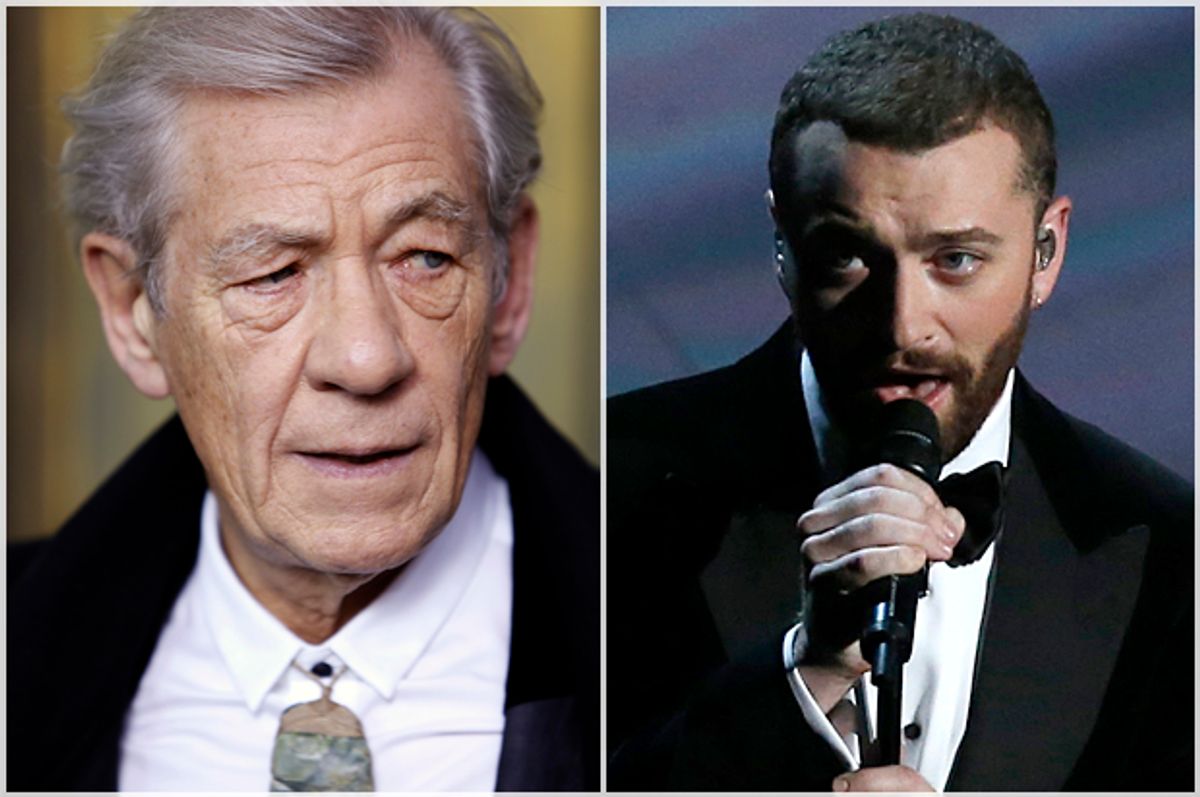 To quote Jennifer Garner, bless his heart. Surely he meant well. But here's a tip for Sam Smith as he goes forward in his career — when you find that you've been nominated for a major award, make sure you vet your acceptance speech though a few fact checkers first. It's a brief speech! You have a publicist! It won't take much time, I promise!

On Sunday, Smith, the 23 year-old British singer-songwriter who gained fame with 2014's cuddle anthem "Stay with Me," had a remarkably not-great night for a guy who went home with an Oscar. First, there was his unfortunate performance of his nominated song from "Spectre," the James Bond movie theme "Writing’s On The Wall." Let's just say that had Smith been a contestant on "The Voice," not a lot of chairs would have been swiveling. Afterward, Smith, speaking for everyone watching at home, said that "Singing was horrible" and admitted he "hated every minute" of the performance.

And later, when he and Jimmy Napes nonetheless picked up the statuette for best song, Smith gave a #humbleandblessed speech in which he said, "I read an article a few months ago by Sir Ian McKellen, and he said no openly gay man had ever won an Oscar, and if this is the case — and even if it isn’t the case — I want to dedicate this to the LGBT community all around the world. I stand here tonight as a proud gay man and I hope we can all stand together as equals one day."

Did Sir Ian McKellen really say that? If only there were some way to find out, perhaps some engine of search!

Needless to say, the Twitter police, even happier than they are when someone makes a grammatical error, leapt all over Smith's comment, pointing out that what McKellen actually said, in a January Guardian interview, was that "No openly gay man has ever won the Oscar; I wonder if that is prejudice or chance," and The Guardian framed his comments in the context of the best actor Oscar.

At the time, McKellen noted that hetero Tom Hanks, Philip Seymour Hoffman and Sean Penn have all won for playing gay men, saying, "How clever, how clever. What about giving me one for playing a straight man? My speech has been in two jackets… 'I'm proud to be the first openly gay man to win the Oscar.' I’ve had to put it back in my pocket twice."

But as the New York Times' Yonette Joseph and others have pointed out, plenty of gay people — in varying degrees of being out, it's true — have over the years won Oscars in a variety of categories. One might take a strict interpretation of McKellen's definition of "openly," but here, let's watch gay Oscar winner Joel Grey announce that the Academy Award is going to gay actor Sir John Gielgud.

Smith also isn't the first gay winner for a Best Song Oscar — unless you want to forget Elton John (for "The Lion King's" "Can You Feel the Love Tonight?"), Stephen Sondheim (for "Dick Tracy's" “Sooner or Later") and Melissa Etheridge (for "An Inconvenient Truth's" ‘I Need to Wake Up.") He wasn't even the only LGBT individual nominated in that category this year — Smith was up against transgender artist ANOHNI, who was nominated "Racing Extinction's" "Manta Ray."

If he wanted to see what an openly gay Oscar winner looks like, Smith might have watched "Milk" screenwriter Dustin Lance Black's victory lap at the 2007 awards, when he said that the story of Harvey Milk "gave me hope to live my life, it game me hope that one day I could live my life openly as who I am and that maybe one day I could even fall in love and get married." At the time, he told "all of the gay and lesbian kids out there tonight… you are beautiful, wonderful creatures of value."

Maybe that's why on Sunday evening, Black — who nine years later is happily engaged to British diver Tom Daley — tweeted a clip of his own acceptance speech and said, "Hey @SamSmithWorld, if you have no idea who I am, it may be time to stop texting my fiancé." He later added, "THE POINT: knowing our LGBTQ history is important. We stand on the shoulders of countless brave men and women who paved the way for us." Sir Ian McKellen, meanwhile, yet again distinguishing himself in the Best Person On Twitter, Non-Chrissy Teigen Division, tweeted, "I'd said no openly gay actor had received #Oscars-that doesn’t detract from @samsmithworld achievement. Congratulations to him & all others!"

Smith's choice to use his moment to dedicate his Oscar to the LGBT community was a well-intentioned one, but the way he went about it came off as unnecessarily self-congratulatory as a comment thread's "First!" Worse, in the process, he forgot about the other Oscars nominees and winners who are members of the LGBT community he dedicated his win to — an omission that about five minutes on Wikipedia would have rectified -- and missed an opportunity to give credit to his predecessors.