A bizarre scene in last night’s episode forces us to again ask: Whose joke is this, and who’s laughing? [UPDATED] 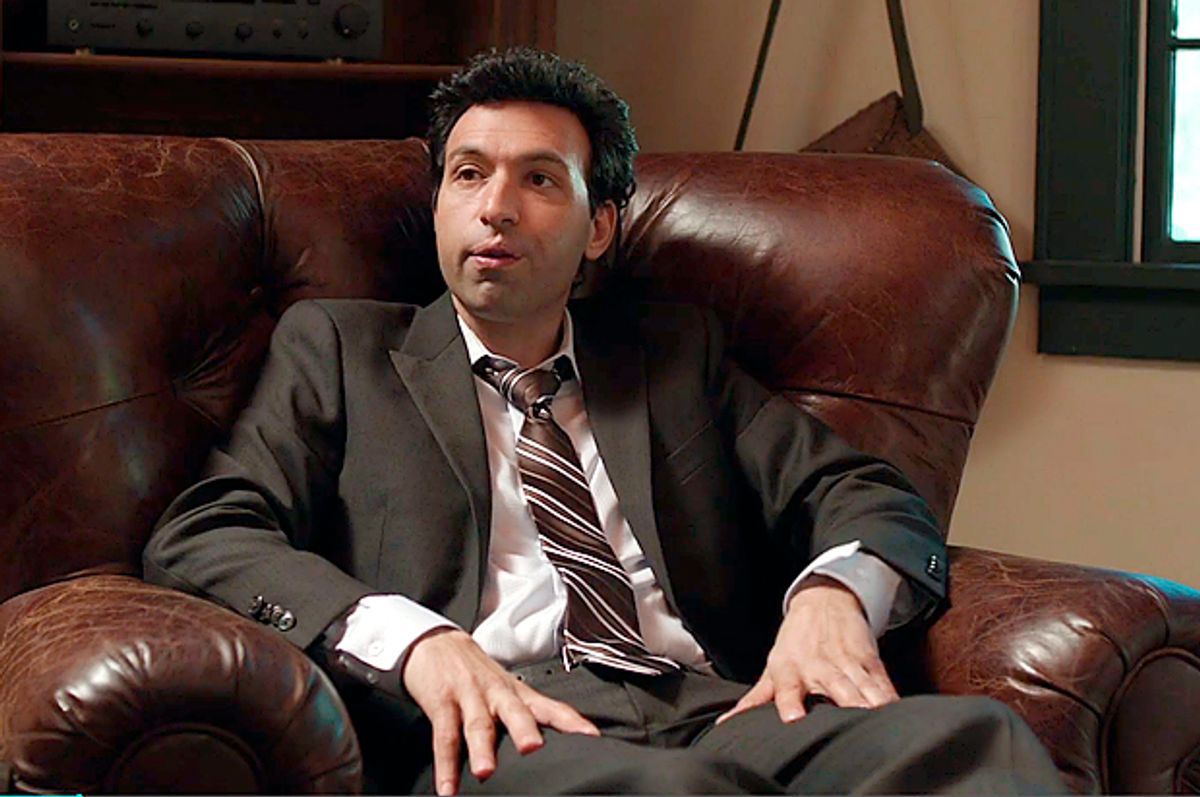 That hint of spring in the air isn’t just longer days and sudden cloudbursts; it’s that unmistakable feeling, on Sunday nights, when “Girls” does something purposefully infuriating, and then waits for the think-piece cleanup crew to put in time on Monday. This week, in Season 5's second episode, “Good Man,” it’s a minutes-long scene in a coffee shop that is supposed to be funny. Ray (Alex Karpovsky) walks into a rival cafe, Helvetica, and complains about their lid policy. In the process, he refers to a person as “sir,” and then backtracks, when both baristas are clearly offended, to hazard an awkward guess: “Female?”

It goes downhill from there. This blunt attempt doesn’t strike anyone well, and the misidentified barista loses their temper. Ray does not understand what went wrong, and makes it worse by not understanding, which then leads the other barista—a black man—to declare, in a parody of pained political correctness: “You offended they. And you offended me.” They then proceeds to address Ray as “white man,” starting with “White man? I think you need to go, white man.” They repeat it, making it sound more and more like an epithet, until Ray exits. Then the two baristas embrace.

“Girls” is a show saturated with self-loathing, and usually it makes its protagonists the butt of its jokes. This scene is no exception. Ray comes into Helvetica with all the unappealing curmudgeonly bluster of Bernie Sanders yelling at a capitalist to get off his lawn. Ray’s always seething with a sense of overlooked potential, and even after starting his own chain of coffee shops, he can’t let go of the haunting feeling that someone cooler and newer is about to usurp him. To add insult to injury, Elijah (Andrew Rannells), Ray’s newest employee, is enamored of Helvetica—flagrantly drinking the competitor’s coffee while at work. So when Ray decides to cross the street and see what’s up at the new cafe, he’s setting himself up to fail—but, characteristically, wants to die on the hill of the principle of the thing.

The problem is that although Ray can be off-putting and unlikable, he’s still a character, one that has had five years of back story being off-putting and unlikable. The two baristas are just window dressing for this particular scene. They are not characters; they don’t even have names. So anything they do—they and “they”—smacks of caricature. (No matter how radically militant anyone is about demolishing gender essentialism, no one who identifies as “they” is asking you to use subject pronouns when the object will do. The word “them” is right there.)

Ironically, there is no subculture that is a more fertile ground for “Girls”’ existence than the nonbinary, touchy-feely, privilege-discussing oeuvre of these young people, but in “Good Man,” that same set of values becomes the material for the abstracted and awkward humor of the scene. The intended irony, I think, is that these ultra-liberated baristas are really the bullies in this scenario, while Ray is the wounded party, driven from the bar by an epithet. I suppose the artistry in it comes from the fact that it is both things, simultaneously: Ray being a jerk, and Ray faced with jerks.

It is tiresome. This is a scene that intentionally marginalizes both a genderqueer and a black person, and then wants to make some kind of broader joke about it, as if “Girls” were some kind of paragon of inclusion. But there is no point. It’s just a “gotcha” moment. If there were more to this scene than mere self-satisfaction—a version of those people who say we’re mean, well, they’re mean sometimes too!—perhaps it would be more rewarding. But this is not one of the scenes from “Transparent” that explores how different gradations and interpretations of emotionally present and intentional living create rifts and friction anyway, often with quite a bit of humor (such as “I’m sorry that you’re triggered by my boundary,” from Tig Notaro’s character in Season 2). This is also not Louis C.K.’s lengthy exploration of being a more accepting person, which is punctuated both by his worst impulses and his understanding that he needs to be better (such as, quite brilliantly, the “Of course… but maybe…” bit about parenting his two girls). In “Girls,” there is no observation, no joke, no value to the scene beyond cringing shock value.

Admittedly, I have never been a fan of “Girls'” style of provocation, which to my mind exists solely for provocation’s sake. As a viewer, I like to feel that a creator has my experience in mind when they’re putting together a show, and with “Girls,” I often feel that either the show’s lens doesn’t care or, worse, is actively trying to push some of its characters anger, hurt and frustration onto me. There is something undeniably skilled about a filmmaker who can create these sorts of powerful responses. But the attempt to get what essentially amounts to a rise out of the viewer also reads a bit juvenile to me. If “Girls” is a five-season-long gambit for attention, it’s worked really well, but honestly, I’ve enjoyed so little of it. In this scene in particular, there’s so much anger and confusion bouncing between the characters—and ultimately pushed onto me, the viewer—that I could not find any of it funny.

But what’s really galling about the scene isn’t even what’s happening on-screen—it’s the way it will play with “Girls”’ intended viewing demographic. Often, the show’s self-loathing exists hand in hand with a kind of defensive deflection, a reflexive method of pre-empting criticism from others by verbalizing it all from the start. It makes for a show that dares to say and do very bold things. But I often find myself wondering if that is just for HBO’s paying audience with highbrow interests to be able to think to themselves, oh thank goodness, someone gets how terrible I find those people. “Girls” is well able to pitch the same scene of cringe-comedy to several different audiences with several different possible takeaways. But in a show that has had many opportunities to grow, the fact that it still finds that voice of white entitlement so readily available is nothing but frustrating, five seasons into writing about it.

UPDATE: Thanks to HitFix's Alan Sepinwall for pointing out to me that the barista that identifies as "they" in the scene is played by Grace Dunham, Lena Dunham's sister. Grace also starred in Lena Dunham's breakout hit, "Tiny Furniture." The close-to-home casting adds to the scene's upended power dynamics, but also to the peculiar and alienating sense of some inside joke playing out at the audience's expense. For the stars, it's all a bit of fun, but we're left with a bad taste in our mouths.