Cruz's last stand: Ted Cruz thinks he's a messiah, but he's a pathetic dunce about to fall on his face

Ted Cruz wants to believe his campaign is the Alamo, but in reality, he's not living a tragedy, but a farce 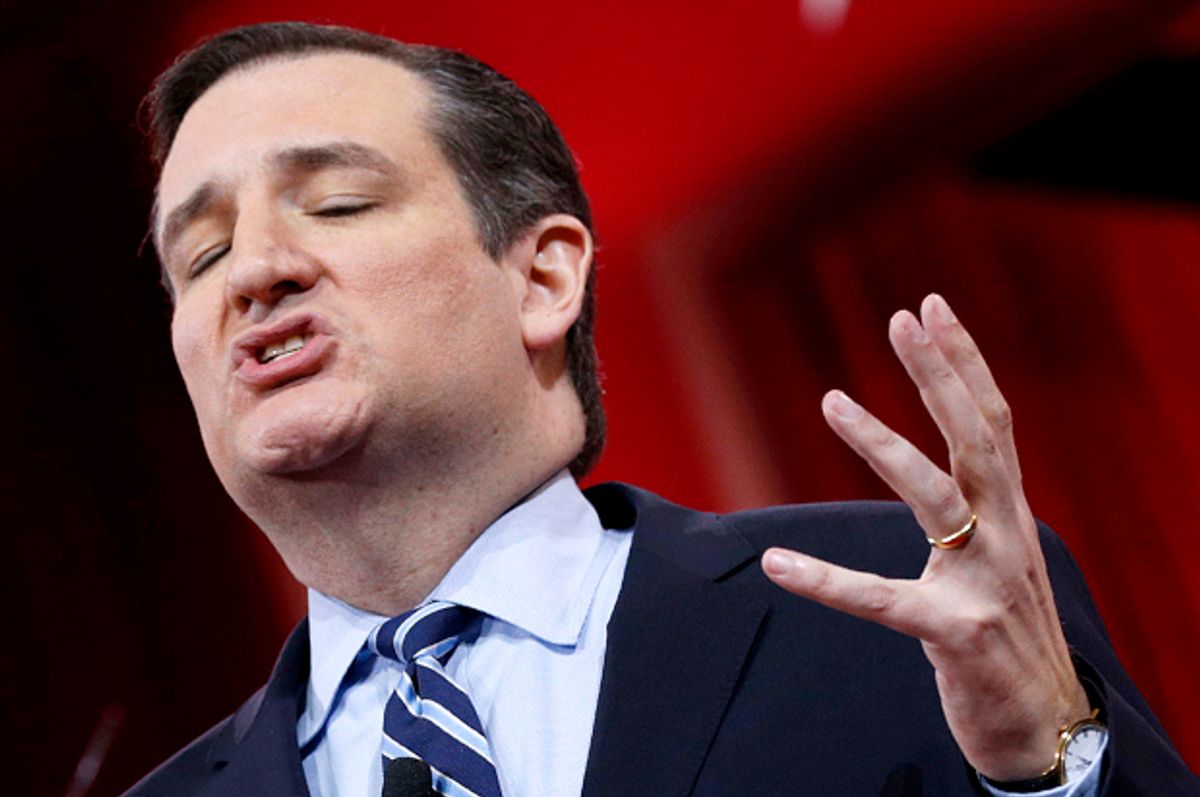 He is not here to make friends. The Republican presidential primary this election cycle has resembled nothing so much as a competitive reality TV show like "The Bachelor" or, of course, "The Apprentice": An overcrowded field of mediocre contestants marked for elimination, a well-groomed but bland contender who the producers clearly picked early to be the winner, the wild card that is freaking the producers out as he keeps not getting eliminated (and seems to be winning!).

And then there's Ted Cruz, the scheming villain who thinks burning bridges is the way to climb the mountain, even though anyone who has seen a reality TV show knows those people may make it to the final rounds, but never actually win.

Today is Super Tuesday, and it does not look like the voters are interested in giving Cruz his rose. RealClearPolitics shows Trump with a comfortable lead in most of the states, and while Cruz is expected to win Texas, with its whopping 155 delegates, there is no way that's enough to overcome Trump's delegate advantage.

As always happens on those dating shows, Cruz can feel but not quite admit that the ax is coming and, in response, is getting rather thirsty. But he can't take the voters back to the fantasy suite to show off what kind of weird sex stuff he'll do for their love. Instead, he'll do the equally cringe-worthy electoral equivalent meant to appeal to conservative voters: Imply, even more strongly than usual, that he is God's Chosen One and that any failure to see that will mean you'll be left behind when the Rapture comes.

The carrot-and-stick approach Cruz is using is cribbed right out of the handbook for Christian evangelism: Promise salvation for those who buy what you're selling, fire and brimstone for those who don't.

Glenn Beck has been holding down the heaven end of the bargain, continuing to stump for Cruz by implying, strongly, that his preferred candidate was sent by God as a prophet. At an event in Oklahoma on Sunday, Beck went full dimestore preacher, telling audiences that "our guy has the best chance of winning, because we have the Almighty God on our side!"

In South Carolina in mid-February, Beck also cultivated the revival tent feel. "I know there is a God. I testify to you that I see a storm coming," he intoned. "Stand for the man I believe was raised for this hour: Ted Cruz."

(If Cruz really wants people to believe he's a prophet sent from God, he probably shouldn't be using the definitively un-prophetic name "Ted." His given name, Rafael, which is literally cribbed from an archangel, seems like a better bet.)

Cruz's father, Rafael Cruz, has stepped forward to offer threats of hell for those who refuse to believe. Speaking with Sandy Rios at the National Religious Broadcasters convention, the elder Cruz warned of bad things God will do to us if we don't let his son be president:

America has been just declining so much that you could say that, perhaps, there is judgment for America. But you know, look at the example of Josiah, King Josiah, in the Old Testament. The people of Israel, where judgment was imminent, because a godly man, a man that brought the people back to the law – and what just happened is judgment was deferred, and so it restored confidence in the people.

(For those who don't speak Fundie-ese, when they're speaking about God's "judgment," that usually means that God will inflict weather disasters, earthquakes, war and terrorism on the country to punish us for our failures to imprison gays and force childbirth on women.)

Barring a miracle (which, to be fair, these folks claim to believe in), God is not going to come through for Cruz on Super Tuesday and isn't going to rain hurricanes and earthquakes on us to get vengeance for his chosen prophet, a prophet named Ted. So what then for Cruz?

It's an interesting question because, in his messianic belief that he is destined for the White House, Cruz stomped on and destroyed what looks to be every relationship he had on Capitol Hill. By all accounts, his fellow Republicans in Congress hate him, because he's taken every single opportunity he can to make life harder for them. He refuses to cooperate with the rest of the party. He relishes opportunities to spit all over everyone else's hard work and pet projects, certain that stepping on other people is the quickest way to the top. He doesn't hesitate to stab a friend in the back, and, as a result, doesn't really have any left.

Of course, the messiah doesn't need friends, right? God is lifting him up to the White House and all other, non-chosen people, are mere obstacles to be kicked aside on your way up.

But alas, it appears God has changed his mind and Cruz is crashing back down to earth, where the number of people who are willing to catch him can't put together a half-court basketball team.

Cruz himself is already shifting narratives, imagining himself the noble hero in the classical tragic style. He's been referencing the Alamo a lot in his Texas campaigning. "“I am determined to sustain myself as long as possible and die like a soldier who never forgets what is due to his own honor and that of his country," he dramatically recited to a crowd in Houston last week. "Victory or death."

Sadly for Cruz, however, there is no Alamo-style last stand possible here. It's really victory or slinking back to the Senate with your tail between your legs, and after tonight, the latter will seem more certain than ever. His story is not tragic, but pathetic. It's not the story of a great man brought low, but of a deluded man who has fallen on his face. He's not Macbeth. He's Malvolio from "Twelfth Night", prancing around in his yellow stockings while public humiliation awaits. And like Malvolio, it couldn't have happened to a nicer guy.