Debating Glenn Greenwald was like "looking the devil in the eye": Ex-NSA chief Michael Hayden details distaste for media in new book

In "Playing to the Edge," Michael Hayden comes out strongly against investigative journalists and whistle-blowers 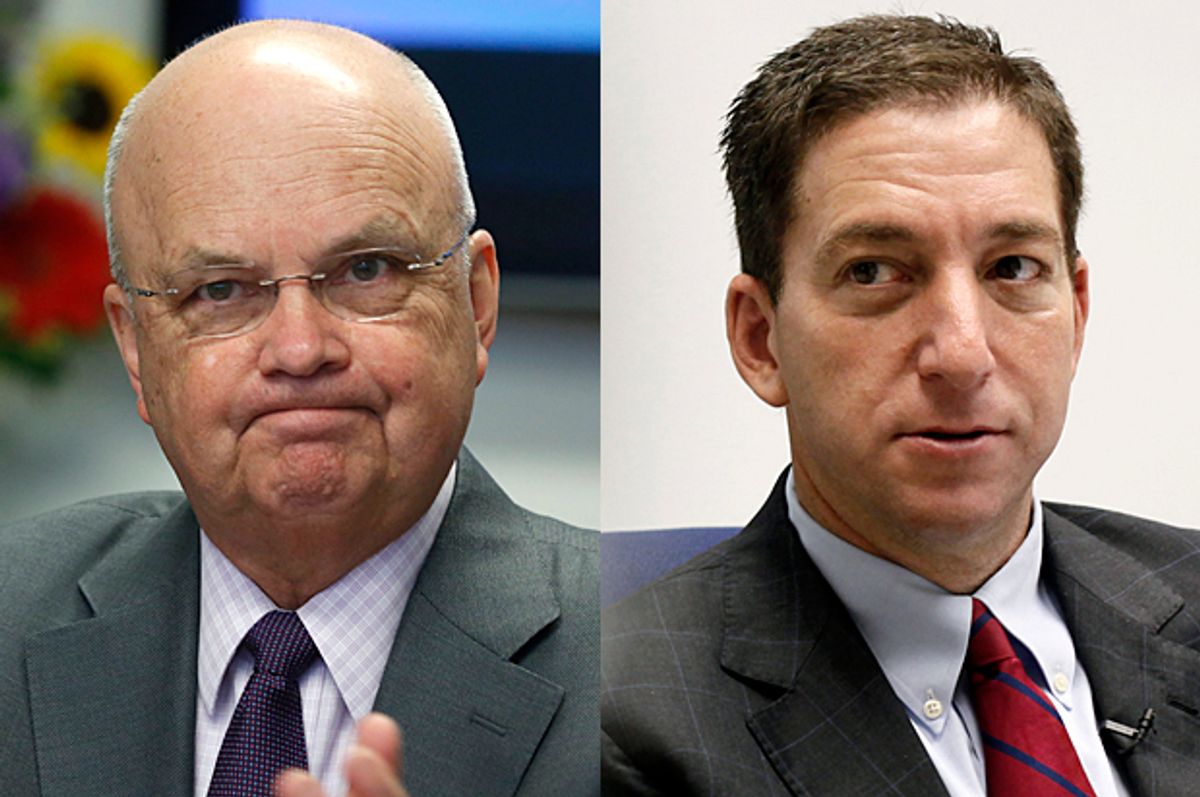 Former CIA and NSA Director Michael Hayden is not a big fan of journalists. At least, that's what his new book, "Playing to the Edge: American Intelligence in the Age of Terror," appears to suggest.

In the book, Hayden disparagingly calls legendary investigative reporter Seymour Hersh a "chaser of real and imagined scandals." He furthermore describes renowned journalists Glenn Greenwald, Laura Poitras, Jane Mayer and Tim Weiner as "hopelessly agenda-driven." (Hersh, Greenwald and Weiner have Pulitzer Prizes for their work; Poitras has both a Pulitzer and an Oscar; and Mayer has been nominated for a Pulitzer twice.)

Hayden blasts journalists for calling the U.S. government's use of torture what it is —"torture," or its use of domestic surveillance "domestic surveillance," or its assassinations "assassinations." "They are useful catchphrases, but they are not always accurate and often oversimplify complex issues," Hayden claims. "They are also conclusions masquerading as narrative."

Whistle-blowers face even harsher scorn in the former U.S. intelligence chief's book. Hayden calls Edward Snowden, the former U.S. government private contractor who leaked classified documents about the NSA's mass surveillance programs, "an incredibly naive, hopelessly narcissistic, and insufferably self-important defector." He also snidely refers to Snowden as "the new Muscovite," and implies he may have acted in the interest of Russia and China.

Hayden takes numerous jabs at Glenn Greenwald, the journalist who worked with Snowden, in particular. Greenwald is mentioned a dozen times throughout the book — more than most other figures. While describing journalist Andrew Sullivan as "consistently anti-Bush," Hayden calls Greenwald "pretty much anti-everything."

In one anecdote, Hayden even characterizes a 2014 debate with Greenwald as an opportunity "to look the devil in the eye."

Salon spoke with Greenwald, who said he was honored by the intelligence official's ill feelings.

"If my work weren't intensely bothersome to George Bush's NSA and CIA chief, I'd be seriously worried, and deeply embarrassed," Greenwald said.

"Good journalists are adversarial to those who wield the kind of power Gen. Hayden wielded, not friendly, supportive or helpful," he added. "Adversarial means adversarial."

Michael Hayden did indeed wield a lot of power. He is among the most established U.S. intelligence officials in history. A retired four-star Air Force general, Hayden has been the only person to serve as director of both the CIA and the NSA.

"Playing to the Edge," therefore, provides a fascinating glimpse into how U.S. intelligence operates. The thick, 451-page tome covers a large variety of topics from all over the world, and offers insight into some of the most formative years of U.S. intelligence, in a post-9/11 world.

Hayden cut his teeth in the Bush administration. He headed the NSA from the turn of the millennium until 2005, transforming the agency into the powerhouse it is today, before serving as CIA chief for Bush's last three years.

He makes it clear that he is quite a big fan of Bush, and goes to lengths throughout the book to defend the former president's legacy.

The former intelligence official devotes a lot of his book to discussing Iran, and one chapter describes the U.S.'s work behind Israel's little-known 2007 bombing of an alleged Syrian nuclear research facility (the Syrian government claimed it was not doing nuclear research, although the International Atomic Energy Agency said there may have been some reasons to suspect otherwise).

The incident, known as Operation Orchard, is little-known because the Israeli and U.S. governments forced the media to remain silent about it for several months after it happened. The British press reported at the time that the story "has been subject to an official news blackout by both Tel Aviv and Washington."

Perhaps the most interesting aspect of "Playing to the Edge," nevertheless, is what it shows about the love-hate relationship between U.S. intelligence and the media — or, in Hayden's case, the hate-hate relationship.

Most revealing is the ways in which Hayden describes the U.S. government pressuring the press to censor stories.

Hayden reveals that, in 2006, National Security Adviser Condoleezza Rice railroaded the New York Times into scrapping a story by reporter James Risen. (Risen responded by later publishing the story in his book "State of War" instead.)

Asking "an editor or publisher to scotch a particularly egregious story" was a big part of his job at both the CIA and NSA, Hayden openly admits. "Those calls I made to slow, scotch, or amend a pending story were worth making," he says.

The U.S. intelligence chief recalls that he "would invariably begin the conversation [with newspaper editors] with, 'Thanks for taking my call. I know that we both have a job to do protecting American security and American liberty. But I'm afraid that how you are about to do yours is going to make it more difficult for me to do mine.'"

Although he does stress that he respects the First Amendment, in his discussion of the 2008 Stellarwind scandal or the Snowden leaks, Hayden makes it clear that he is infuriated when government secrets appear in the media. Recalling a 2006 off-the-record gathering with journalists, he says he "laid into" them "a catalogue of specific harm done by leaked secrets."

Reacting to Hayden's comments in the book, Greenwald told Salon, "I'm very thankful I'm not the long-time Washington bureau chief of The New York Times, Philip Taubman, who earned Hayden's admiration by agreeing to suppress stories — including one that eventually won the Pulitzer Prize — because Hayden and other government officials demanded it."

"Servitude is how journalists earn the affection of government officials," Greenwald added.

Hayden's recounting of his 2014 debate with Greenwald is instructive in how it reflects his worldview.

"I got to look the devil in the eye ... when I debated advocacy journalist Glenn Greenwald in Toronto on the whole Snowden episode," Hayden recalled. His debate partner was Alan Dershowitz, a Harvard law professor known for his dogmatic defense of Israel. Prominent scholar and Israel-Palestine expert Norman Finkelstein has accused Dershowitz of plagiarizing error-ridden and debunked pro-Israel literature.

Greenwald's debate partner was Reddit co-founder and Internet activist Alexis Ohanian. On the morning of the debate, Greenwald was quoted in the Toronto press stating: "I consider [Hayden] and Dershowitz two of the most pernicious human beings on the planet. I find them morally offensive. There's an element of hypocrisy to being in the same room with them, treating them as if I have outward respect, because I don't."

The four challenged each other for two hours. Hayden portrayed himself as a passionate defender of freedom, concerned with preserving "the difficult balance a free people have to make between their liberty and their security."

Dershowitz, on the other hand, "hammered" the argument that "motives matter, he declared, even when people might be wrong — a rebuttal to Greenwald’s dismissal of our moral worth and the worth of any of our arguments," Hayden writes, in what appears to be a rare admission among an otherwise incredibly defensive text that perhaps U.S. mass surveillance took things a bit too far.

In his conclusion to the anecdote, Hayden claps himself on the back for standing up to the mighty Greenwald. "Alan and I held our own in the debate," he recalled. "It was truly a road game for us."

"Afterward I exchanged cards with Ohanian. I didn't even exchange glances with Greenwald," he added.

"Playing to the Edge" suggests that, in Hayden's world, he earnestly believes the cards are stacked against him. He seems to believe he is a misunderstood freedom fighter who meets obstacles at every turn, swimming upstream against a raging tide, and implies that the media is colluding against him and the NSA.

It is perhaps arguable whether or not Hayden dislikes journalists, but one thing is not debatable: Hayden hates Edward Snowden.

"The Snowden revelations were costly," Hayden writes in the book, calling the leaks "the greatest hemorrhaging of legitimate American secrets in the history of the republic."

Hayden says he, and "almost anyone else in the American intelligence community, [was] viscerally angry with him and what he had done."

When Snowden was nominated for the European Parliament's Sakharov Prize for Freedom of Thought in 2013, Hayden said, "I must admit in my darker moments over the past several months, I'd also thought of nominating Mr. Snowden, but it was for a different list."

The press immediately understood he was referring to the Obama administration's so-called "Kill List" (otherwise euphemistically known as the "disposition matrix").

In his book, however, Hayden disparagingly calls journalists "Snowdenistas" and denies that he had the Kill List in mind (although he fails to mention what list he was actually referring to, exactly).

Hayden peddles the argument that the Snowden leaks threatened the U.S. government, claiming the whistle-blowers "revelations — across the board — cost the United States dearly in the accesses it had already gained."

After the Snowden leaks, Hayden compares the press coverage to the U.S.'s 2003 brutal "Shock and Awe" bombing of Iraq. He warned that "the enemy had demonstrated that he was already inside the gates and — even when he physically might not be inside the United States — his communications often were," and says the "sins that Greenwald, Gellman, and others were attempting to portray were efforts by NSA and other intelligence services to deal with" this elusive enemy.

Since 2013, government officials like Hayden have consistently claimed that the Snowden leaks endangered the U.S., yet have failed to procure a modicum of evidence proving that this is true.

In fact, the government did release part of its report on the effects of the Snowden leaks, after a Freedom of Information Act request from the Guardian, but heavily redacted the document and withheld 70 percent of the pages.

Hayden doubtless sees his book as an attempt at a corrective in a post-Snowden age. Others would argue "Playing to the Edge" constitutes a whitewash of the actions of the leading U.S. intelligence agencies.

Although he defends many of the government's programs, nevertheless, Hayden does concede that the media plays an important role in society, despite his harsh criticisms.

"Journalists correctly argue that an informed public is the lifeblood of democracy. And I readily concede that people like me can be prone to keep too much hidden," Hayden writes.

"Many say that the U.S. government overclassifies things. They're right," he adds, noting that government spokespeople "have to bend themselves into linguistic pretzels of passive voice and oblique generalizations for fear of uttering which arm of the U.S. government may or may not conduct targeted killings from UAVs" (the official government term for drones).

"If I had to choose, I was willing to sacrifice secrets, but not the First Amendment. That remains sacred, even when it is being abused," Hayden graciously notes, concluding that the "legitimate free press-legitimate government secrets thing is a condition we will have to manage."

Throughout the 451 pages, one can sometimes glean rare moments like these, in which Hayden acknowledges that the government may have perhaps gone too far.

In another of such moments, Hayden warns that, since he retired, government "prosecutions have become more robust. So robust, in fact, that even I have been uncomfortable about some of them."

"The investigations have been very aggressive, and the acquisition of journalists' communications records has been broad, invasive, secret, and — one suspects— unnecessary," Hayden writes.

He adds, "The government may also want to adjust its approach to enforcement."