Post-civil rights GOP is our largest white identity group. Maybe we should thank Trump for making it so obvious 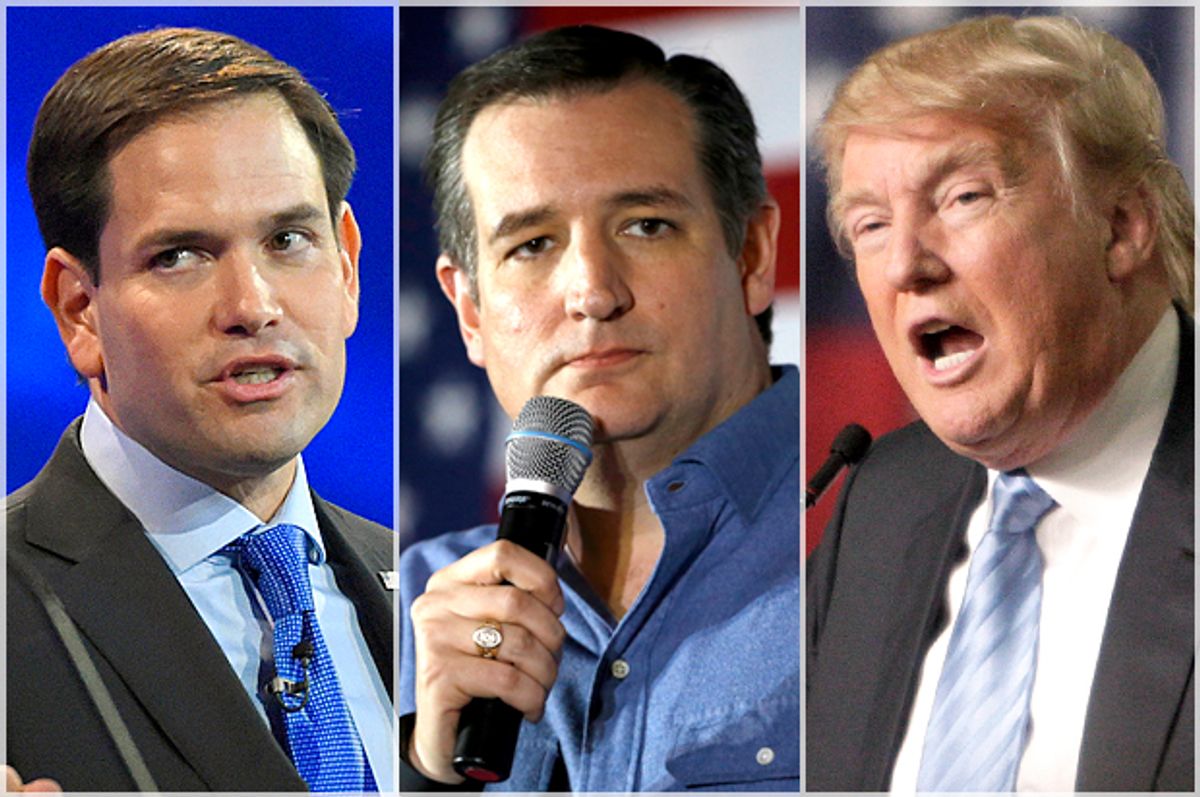 Donald Trump is the preferred candidate of white supremacists. Online and in other spaces, they have anointed him their champion in the 2016 presidential race.

When asked about this on CNN, Donald Trump deflected, bobbed, weaved and dissembled:

"Just so you understand, I don't know anything about David Duke, OK?" Trump said. Trump was pressed three times on whether he'd distance himself from the Ku Klux Klan -- but never mentioned the group in his answers.

Despite what he said Sunday, Trump apparently did know Duke in 2000 -- citing him, as well as Pat Buchanan and Lenora Fulani -- in a statement that year explaining why he had decided to end his brief flirtation with a Reform Party presidential campaign.

"The Reform Party now includes a Klansman, Mr. Duke, a neo-Nazi, Mr. Buchanan, and a communist, Ms. Fulani. This is not company I wish to keep," Trump said in a statement reported then by The New York Times. ...

After his appearance on "State of the Union," Trump highlighted that Friday comment in a tweet, saying he does disavow Duke.

"Really sad. @realDonaldTrump you're better than this. We should all agree, racism is wrong, KKK is abhorrent."

"Are you kidding. Of course the @gop has and does denounce these hate groups/people."

The facts are not always kind. In reality, the relationship between the Republican Party and white supremacy--and yes, the Ku Klux Klan--is much deeper and more problematic than the comments by Rubio, Cruz, Spicer and other Republicans would suggest.

Political parties are a type of “brand name” that voters associate with a specific set of policies, ideas, personalities and moral values. Consequently, the types of voters who are attracted to a given political party also tells us a great deal about how it is perceived by the public. And in a democracy, the relationship between voters, elected officials and a given political party should ideally be reflected by the types of policies the latter advances in order to both win and stay in power.

By these criteria, the post-civil rights era Republican Party is the United States’ largest white identity organization, one in which conservatism and racism are now one and the same thing.

In the 2012 election, 89 percent of Republican voters were white. While the Republican Party routinely anoints a professional “best black friend” (Herman Cain in 2012; Ben Carson in 2016; Republican National Committee chairman Michael Steele in 2009) who serves in the role as human chaff to deflect charges of racism, non-whites are a minuscule part of the GOP’s electoral coalition and base. This is reflected by how Republican voters are much more likely to be racially resentful toward black Americans and also manifest what is known as “modern” or “symbolic racism.”

Even more troubling, research by Brown University political scientist Michael Tesler demonstrates that “old-fashioned racism” has actually increased among Republican voters since the election of Barack Obama. Once thought to be a relative non-factor in contemporary politics, this, the more primitive and retrograde racism of Jim and Jane Crow America, is now such a potent force that it is directly correlated with party identification: individuals who are “old-fashioned racists” are more likely to support the Republican Party.

Since the end of the African-American civil rights movement, the electoral strategy of the Republican Party has relied on the use of racially coded appeals and “dog whistle” politics to win over white voters. This tactic -- what would come to be known as the “Southern Strategy” -- was outlined by Lee Atwater, mentor to Karl Rove, as:

You start out in 1954 by saying, “N****r, n****r, n****r.” By 1968 you can’t say “n****r”—that hurts you, backfires. So you say stuff like, uh, forced busing, states’ rights, and all that stuff, and you’re getting so abstract. Now, you’re talking about cutting taxes, and all these things you’re talking about are totally economic things and a byproduct of them is, blacks get hurt worse than whites.… “We want to cut this,” is much more abstract than even the busing thing, uh, and a hell of a lot more abstract than “N****r, n****r.”

Atwater’s approach for mobilizing white American voters has dominated Republican electoral strategy for at least four decades. It was the basis for Ronald Reagan’s “law and order” and black “welfare queen” narratives. George H.W. Bush summoned it with his Willie Horton, “black beast criminal rapist” campaign ad in 1988. The Southern Strategy was desperately deployed against the United States’ first black president, Barack Obama. From “birtherism” to claims that Obama is “traitor” who “hates Americans,” the rampant disrespect and obstructionism that Republicans have shown toward him, as well as the panoply of both overt and subtle racist attacks by conservatives against Obama’s person (and family) are all outgrowths of the Southern Strategy.

The Southern Strategy, with its mix of coded and overt anti-black and brown racism, is also a script that is closely adhered to by the broader right-wing news entertainment propaganda machine.

The Age of Obama also gave rise to the Tea Party movement. As an extreme wing within an already extremist and revanchist Republican Party, Tea Party members and their sympathizers were/are extremely hostile to Barack Obama and the symbolic power of a black man leading “their” White America. The Tea Party demand that “they want their country back” is both a direct claim of white privilege and constitutes a worldview where whiteness is taken to be synonymous with being a “real American.”

White supremacists quickly identified the Tea Party's agenda as congruous with their goals and values. To that end, they attempted to infiltrate and recruit members at Tea Party events."

Researchers have also found that Tea Party membership and activity was a “racializing” experience for white people, which encouraged them to think in terms of white group interests. In all, the Tea Party and other right-wing organizations are ripe territory for converting white conservatives from being “modern racists” to a more “old-fashioned” type of racism and white supremacy.

Policies and outcomes are also an invaluable barometer for assessing the relationship between the Republican Party, racism and white supremacy. The modern Republican Party has consistently opposed civil rights protections for African-Americans and other people of color. The Republican Party in the Age of Obama has also undermined the won in blood and lives victories of the black freedom struggle and civil rights movement by gutting the Voting Rights Act and allowing states to put in place programs that deter civic participation by African-Americans, young people, the elderly and the poor. Many of the public policy goals advocated for (and advanced) by the contemporary Republican Party are racist and white supremacist both in terms of their disparate impact across the color line, as well as the malicious intent behind them.

One of the most fascinating stories in American political history is how the Republican Party, once the home of the “Great Emancipator” Abraham Lincoln, was able to “flip” the states of the former slaveholding Confederacy to their side. The Southern Strategy, hostility to African-Americans and the civil rights movement, a sophisticated right-wing media campaign, generational replacement, Christian Evangelicals and their investment in the Jim Crow order, abortion and “values voting” are all part of that story.

David Cunningham, Justin Farrell and Rory McVeigh explored this in their recent article in the American Sociological Review titled “Political Polarization as a Social Movement Outcome: 1960s Klan Activism and Its Enduring Impact on Political Realignment in Southern Counties, 1960 to 2000."

There they explained how (my emphasis added):

The primary question that drove our research is whether or not southern counties that experienced Klan activism in the 1960s showed greater increases in Republican voting than did southern counties that did not have Klan organizations.  We statistically controlled for numerous other changes that took place within counties over time.  Our analysis benefited from the fact that we had a measure of Republican voting prior to the resurgence of the Ku Klux Klan in the early 1960s, as well as measures of voting in subsequent elections that were held after the period of intense Klan activism had faded.

We found that Klan counties did, in fact, experience greater movement to the Republican candidates and, importantly, we found that the effect of Klan activism did not diminish over time.

For example, when we examined the difference in the Republican vote for Richard Nixon in 1960 and the vote for Republican George W. Bush in 2000, the growth in Republican voting was, on average, more than five percent higher in Klan counties compared to non-Klan counties, net of other factors that contributed to the change.  Given that the 2000 election was decided by an extremely tight race in the state of Florida, one might argue that the historical influence of the Klan represents the difference between a Bush presidency and an Al Gore presidency…

Our interest in political polarization led us not only to examine change in county voting over time, but also to analyze how former Klan activism might be related to individual voting behavior.  We obtained survey data from the 1992 Southern Focus Poll to examine voting preferences decades after the Klan had declined.  We were particularly interested in how racial attitudes mapped on to voting preferences, and whether that differed depending upon whether the Klan had previously been active in the individual’s county of residence.  In multivariate analyses, we found that conservative racial attitudes did predict Republican voting, but that was only the case in counties that had experienced prior Klan activism.

Ted Cruz, Marco Rubio, Donald Trump and other Republicans will enthusiastically deny that the Republican Party has any connections to the Ku Klux Klan. Part of their spin will be focused on an erroneous and dishonest reading of American history where “Southern Democrats” are reimagined as a group other than the core of today’s Republican Party.

The other deflection will be centered on the lie that the Republican Party is the “true party of civil rights” in America. Empirical reality does not support such a description of the contemporary Republican Party. The idea that the Republican Party is a force on the side of expanding and protecting the liberties, civil rights, and freedoms of black and brown Americans is a fiction, one that has the most minimal of traction, only by virtue of repetition within the closed universe created by the right-wing disinformation machine.

Not all Republicans are racists. But racists are more likely to be Republicans.

Donald Trump knows this to be true. He has built a political campaign around that fact.

Ultimately, Republican Party elites are nervous about Donald Trump because he has taken their “polite” “dog whistle” racism and replaced it with a loud speaker.

The Republican Party and the “conservative establishment” do not disagree with Trump’s racism, xenophobia, prejudice and bigotry toward Hispanic and Latino immigrants, non-whites, Muslims and women. They are just embarrassed and aghast that Donald Trump has dropped the mask of racist gentility and exposed the racist id of today’s Republican Party and movement conservatism for the world to see.