Leo owes his Oscar to the bear: "The Revenant" told an American story the Academy couldn't help but devour

"The Revenant" celebrates wrestling with natural resources, brutalizing them into submission & converting to profit 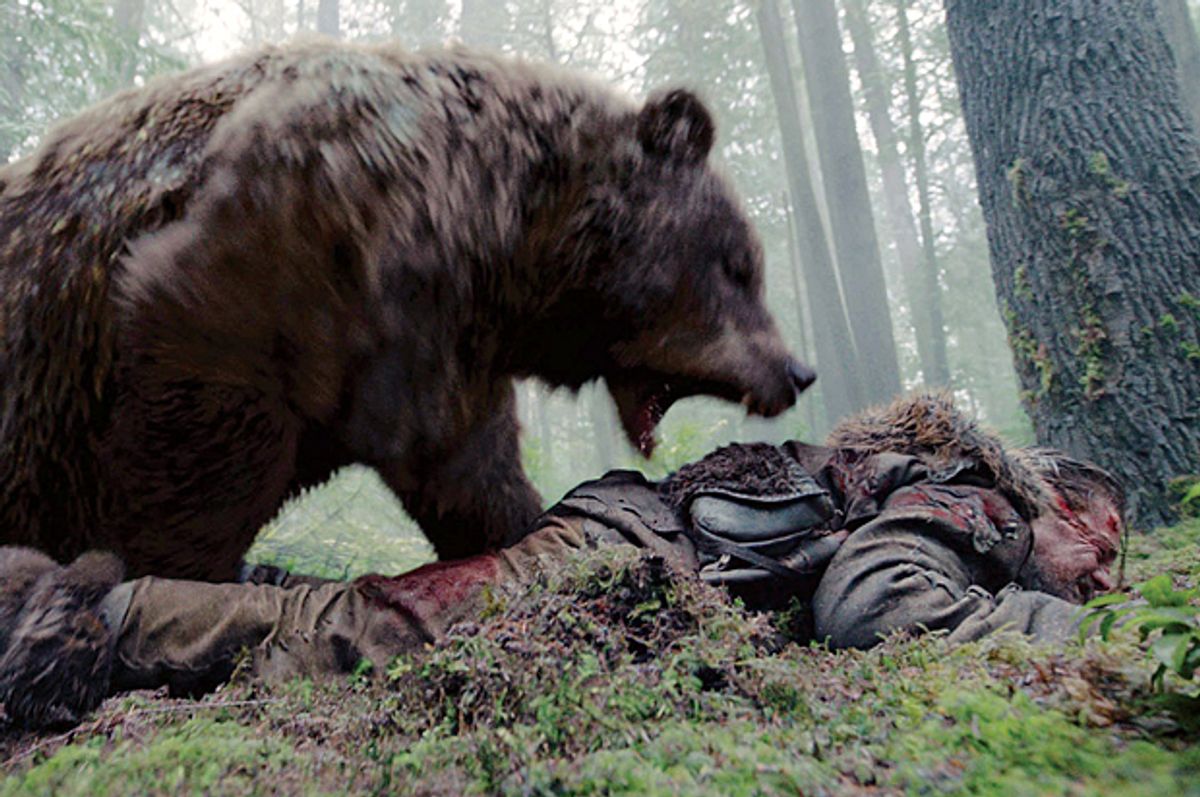 At the Oscars this year, the big winner was the bear. By the end of the award’s ceremony, Leonardo DiCaprio had finally won Best Actor for his role as Hugh Glass in “The Revenant,” a film that is not about a bear, except it is. The film’s director, Alejandro G. Iñárritu, won Best Director for, among other things, having the skill to make audiences believe that the fake bear was real. All evening long, the awards ceremony had run spoofs that cast Black actors in the films nominated for Best Picture. In “The Revenant,” comedian and "Saturday Night Live" star Leslie Jones showed up as herself, giving Leo an angry thrashing in place of the bear that nearly killed his character. Meanwhile, in the audience, a guy in a full bear suit stole the show.

This last was supposed to be a genial prank, but the fact that a fake-fur bear showed up in the first place tells you the outsize place that the life-and-death struggle between Hugh Glass and the lady bear (known as a sow) held in “The Revenant.” Many viewers wondered how that movie magic was achieved. Did they train a real bear? Are attack bears a thing? A few weeks ago, writer John Irving declared that The Revenant featured the most authentic “bear-on-man action ever committed to celluloid,” and went on to discuss it at length. (Naturally, Irving was talking about bear wrestling, not homoeroticism, and anyways the bear in the film was female.) Why is the popular imagination so entranced by stories of Man v. Bear--and more specifically, the Brown bear (Ursus arctos horribilis), otherwise known as the grizzly?

The bear in “The Bear,” starring Anthony Hopkins, is a grizzly. So is the bear in the opening scenes of “The Wolverine,” this being the “X-men” series offshoot where sad Logan goes to Japan. Presumably, "the bar that kilt me [sic]," in "Jeremiah Johnson," 1972, was also a grizzly. Adventurer Bear Gryllis has basically made a career off the fact that his last name is a homonym for "grizzly."

It goes on. There’s Werner Herzog's "Grizzly Man," as well as the horror film, "Grizzly," 1976, and the unreleased sequel, "Grizzly 2," notable for starring a trio of then-unknown actors named George Clooney, Charlie Sheen and Laura Dern.  Every once in a while, when hard men venture into the forest, terror comes in the form of a wolf, such as "The Grey," but they've mostly been turned into werewolves, and are no longer cinematically understood as wild predators but villainous emissaries of the supernatural. Even the comedic memoir, "A Walk in the Woods," the film version of which starred Robert "Jeremiah Johnson" Redford, begins with Bill Bryson hiking in a state of hyper-vigilance in the manner of Vicky Robinson, the scheming girlfriend in the "Parent Trap," 1961. She's so afraid of being eaten by an imaginary mountain lion that she freaks out when two adorable bear cubs show up and lick honey off her feet.

Which brings me to that much-discussed bear scene in "The Revenant." For me, the question, sparked by one rogue pre-release post on the Drudge Report, "Did the bear have her way with Leo?" is far less interesting than asking: "Why would anyone think that in the first place?" The stuntman in the bear suit, Glenn Ennis, has said, tongue in cheek: “I spent a lot of time rolling around with Leo, but it was all consensual.” That the scene was being acted by a human man in a female bear suit is not entirely irrelevant to the sexual tension of that scene. But in terms of grizzly behavior, it made no sense whatsoever. In the annals of natural history, there is not a single verified instance of a wild bear sexually molesting a human. Though a variety of critters have been known to hump humans of both sexes, those instances usually involve domesticated pets and livestock. In the wild, the most rape-y critters of them all aren’t members of the simian family but the male dolphin. (Should you wish to make your eyeballs burn, there are numerous examples of this behavior available on YouTube, as well as the infamous and well documented story of a sexual relationship between a human woman and a male dolphin named Peter, who committed “suicide” when she left him. Make of that what you will.)

Bear stories are really never about bears, whether we’re talking the constellation called Ursa Major, or Winnie the Pooh and other fictional bears. By comparison, consider the winner of the 2016 Oscar for best animated short, “Bear Story.” (Watch it here.) Beautifully crafted, this Chilean film functions perfectly well as a nesting-doll story within a story about a kidnapped bear forced to perform in a circus. Nonetheless, audiences in Chile “instantly” recognized it as an “allegory for the way families were torn apart during the murderous Pinochet regime during the 1970s,” when leftist protestors were made to disappear. As was the bear in “Bear Story.” That not-so-distant history gives the story emotional range beyond the sentimental, and it exerts its powerful message even if foreign audiences remain unaware of the cultural specifics of life in Chile under a dictatorship. Designed as an allegory by the director, the film carries symbolic reminders of terrible injustices yet remains suitable viewing for children.

“The Revenant,” by contrast, has inspired some critics to gnash their teeth in despair, because neither DiCaprio nor Iñárritu seem to have any grasp of the true depth of genocidal acts perpetrated against Indigenous peoples by European traders and American settlers, even DiCaprio expends a great deal of air claiming to be an ally of the very people he continues to exploit in order to augment his personal legend. Loosely based on the unreliable 19th-century survival tale of Hugh Glass, the film augments Glass’s own fictions by glossing over the rape of the land and our (not-so) benevolent stewardship of it. For “The Revenant” tells a stark yet shimmering tale of white men subduing brutal markets and winning—a story of financial success--even as it masquerades as a redemptive story of a solitary hero who triumphs over adversity in the end. This is, after all, what the North American fur trade was about in the first place: manfully (i.e. violently) wresting natural resources from Mother Nature, brutalizing them into submission, and converting them into profits.

This stuff lodges deep in history and the subconscious, wherefore the stock market is described as being either "bearish" or "bullish," and Merrill Lynch’s logo is very clearly not a bear.  A “bear” market: means stock values are down, even as the “stock” market itself is short for livestock that used to be herded into one place for trading. When the market is bearish, investors lose money. So no, Leo didn’t get screwed over by a lady bear though it briefly seemed to haters that this fantasy might have occurred, and the spoof presented at the Oscar ceremony itself made the point that the ferocious bear in “The Revenant” wasn’t gender neutral but female. Instead, Leo’s character took matters in his own hands and literally made a killing. So did his film, scooping up award after award in the process.

For his “cynical” acceptance speech at the Golden Globes, Aisha Harris called DiCaprio out for wrapping himself in a mantle of liberal virtue while declaring to all First Nations and Indigenous peoples without a soupçon of shame: “It is time that we recognize your history and that we protect your indigenous lands from corporate interests and people that are out there to exploit them. It is time that we heard your voice and protected this planet for future generations.”

So of course “The Revenant” won Best Director and Best Actor at the Oscars, because it fails to recognize Indigenous history while endorsing every one of those exploitative actions so that white men can profit from them. But-- hey, look! There’s a guy in a bear suit in the audience.