Rubio's doomed attack: Laughable strategy to beat Donald Trump at his own game is DOA

With obvious desperation, the establishment favorite is copying the Donald's shtick. Here's why it won't work 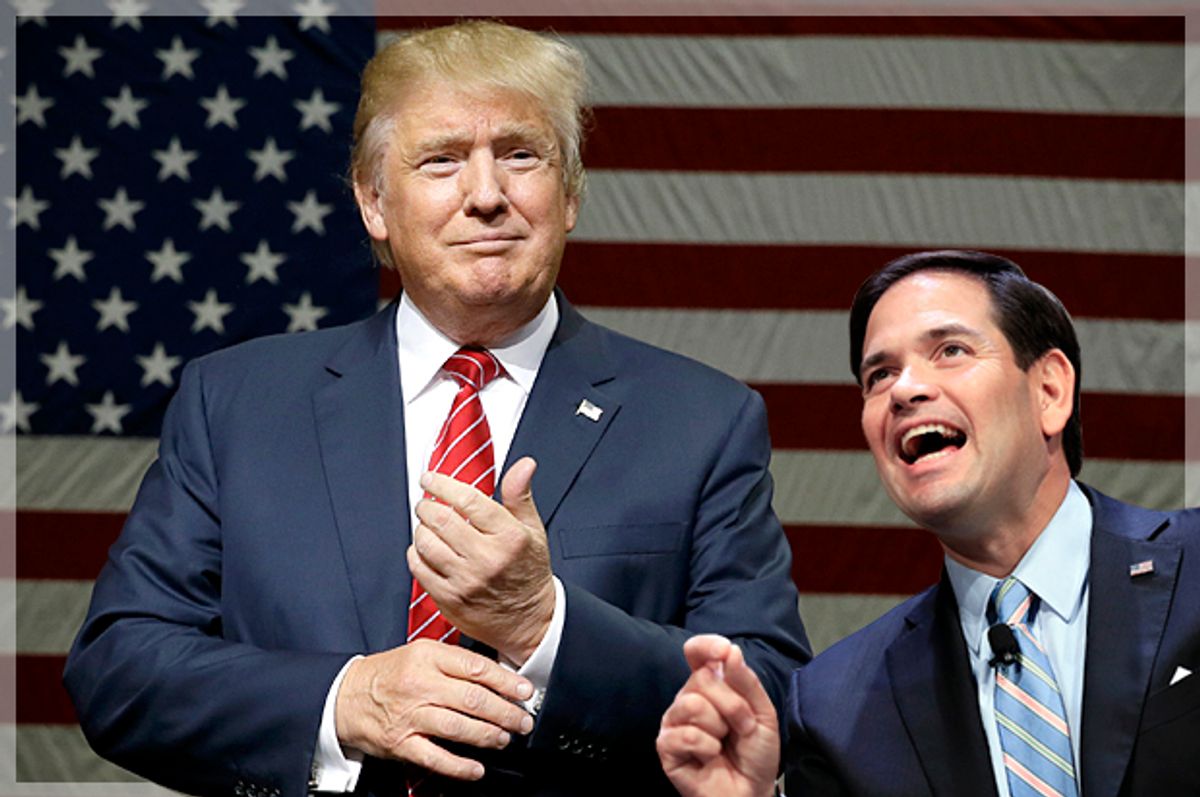 About a month ago, the Washington Post’s Jim Tankersley tried his hand at explaining the rise of Donald Trump. Relying on a Washington Post-ABC News poll and this nifty “interactive” from the Wall Street Journal, Tankersley made a straightforward argument, one that you’ve likely heard by now already.

Trump’s supporters’ chief motivation, he claimed, is a mixture of chauvinism on the one hand, and profound economic insecurity on the other. After noting that, among Republicans, Trump voters are uniquely skeptical of free trade, uniquely hostile toward immigrants (legal and otherwise), and uniquely worried about their household’s near-term economic future, Tankersley wrote:

Trump is winning because he has tapped into a particular set of concerns and dominated his rivals on all of them. Indeed, the Post-ABC poll finds a majority of Republicans trust Trump more than any candidate to handle the economy and bring needed change to Washington. A near majority trusts him the most on immigration and on terrorism (an issue he has repeatedly linked to immigration). He fares worse on the question of which candidate is closest to you on issues in general and which would best handle an international crisis. But those questions do not appear to be moving voters to the same degree.

As I said, none of this is news to anyone who’s turned to Google in recent weeks, searching for an explanation of the “irrational phenomena” that surround Trump 2016. Trump voters are scared, angry and looking for someone to blame. And they’re inclusive in their fury: When the Trumpist day of reckoning comes, the lazy moochers at the bottom and the greedy bloodsuckers at the top will both burn.

What these explainers don’t reveal about Trump’s fan, however, may be even more important. Because despite its playing such an outsize role in the media’s coverage, there’s little evidence that it’s the Donald’s self-consciously transgressive rhetoric that draws his supporters to him. It doesn’t bother them, of course. But the fact that Trump will say things others won’t is not, in itself, the point.

That distinction belongs instead to Trump’s usual response to the ensuing criticism and outrage. He shrugs. He doubles down. He laughs. He seems to quite genuinely not give a shit. And why is that important to these voters? Not just because they like seeing these elites squirm; but because they believe that if Trump won’t back down to elite pressure over words, he won’t do it over policy, either.

The logic, in other words, is as follows: If Trump can take the heat for talking about Megyn Kelly’s “wherever,” then he definitely can take the heat for ending the 30-plus years of elite consensus in support of low-skilled immigration and free trade. It’s policy that ultimately matters — even to the “poorly educated.”

All of which brings me to Sen. Marco Rubio, the flailing establishment candidate who spent most of the past week trying — yet again — to rebrand himself. Whereas Rubio was once the GOP’s best attempt to create a Republican Obama, nowadays he’s more like the political version of a second-rate insult comic. A destitute man’s Triumph, the Insult Comic Dog; Don Rickles with bad jokes, a security detail and a patriotic lapel pin.

The target of Rubio’s newfound pugnaciousness is, of course, Trump. Rubio’s juvenile digs about Trump’s pants, his hands, his penis and his skin are all attempts to beat the Donald at his own game. Rubio has said he’d rather not campaign this way. But if this is what Republican voters want from their nominee — if they want their standard bearer to operate on the level of an antisocial 13-year-old — then, dammit, that’s what they’ll get.

As is so often the case with Rubio, however, he’s focusing too much on style and too little on substance. Many GOPers like the way Trump bullies his opponents, it’s true. They think it’s a sign of “strength.” But what matters just as much as Trump’s strength is the way they think he’ll use it — namely, to get rid of “illegals,” “get tough” with China, cut workers’ taxes, and “bring our jobs back.” The how is important; but so is the what.

And it’s the what, in the end, that best explains why Rubio is losing. It’s not because Republicans want more dick jokes; it’s because they don’t want Rubio’s microwaved Bushism. It’s because they believe that economic nationalism would make their lives better, if only the president were willing to ignore the elite blowback and take a stand.

So Rubio can degrade his rhetoric as much as he wants, but it won’t make much of a difference. He’ll still be the vehicle for policies the GOP base has largely rejected. He’ll still be a distant second to Trump, at best. His 2016 campaign has been struggling for a long time already; but now, if he loses, whatever’s left of his dignity will go down with it.