The GOP is the straight, white, Christian party: This is why Donald Trump is winning -- and why I left a party of intolerance and hate

Republicans reject cultural diversity of any kind. It explains Trump, and why I can't be a gay GOP activist anymore 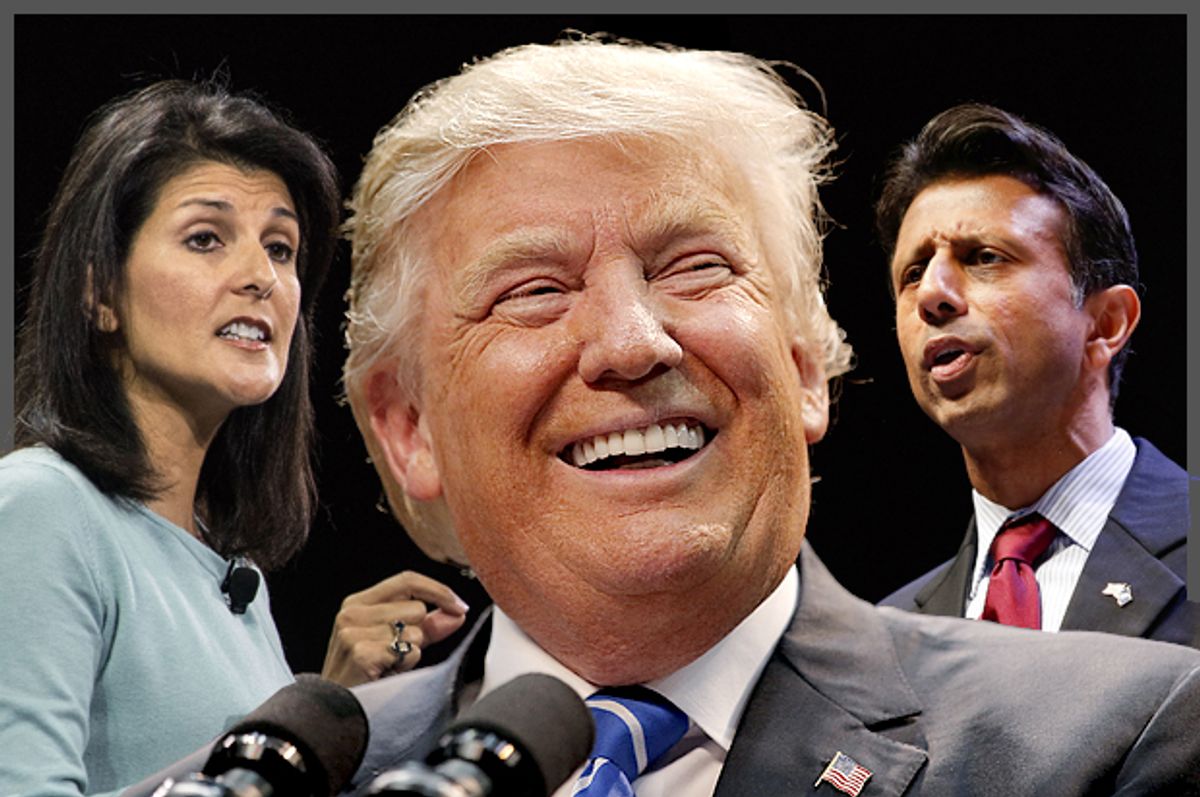 Judging from that political theater, you may think that the GOP is as diverse as America is in 2016, and that today’s Republican Party was a modern party that reflects our new multicultural reality in America.

That “diversity” isn’t what it appears. The truth is that there’s really not much diversity culturally. The Republican Party has lots of examples of people of a variety of genetic lineages in important positions but they have all conformed to the cultural perspective of straight, white, American Christians.

Haley, a straight Christian in a St. John knit, is an acceptable face of the party, but if she were a lesbian Hindu in a sari, she wouldn’t be accepted, even if she held the exact same political views. Bobby Jindal, the former Louisiana governor, is also of Indian decent, but he’s culturally a dark-skinned bubba who perfectly conforms with his “Duck Dynasty” Southern constituency.

Those political figures and others have to conform culturally because their party’s political base rejects cultural diversity. They really aren’t comfortable outside of their own cultural experience, and they don’t want to evolve, and in many cases they advocate for the government to pass laws to help them to keep the country from changing culturally. I learned that firsthand as an openly gay conservative who spent most of my career as a Republican activist.

I left the party a couple of years ago when it was clear to me that the cultural disconnect was too pronounced to overcome. There are countless things that happened that led me to that realization, some were big policy problems relating to things such as immigration and issues affecting gay people, and some were small, somewhat trivial anecdotal cultural indicators, such as restaurant choices.

It was the evening before a conservative media conference and a lot of the attendees were sitting and visiting in the hotel bar. Then a group of us decided to venture out of the hotel to get some dinner. We were trying to decide where to eat, and I suggested that we find some Indian food, or maybe a Thai restaurant. My suggestions were roundly rejected by the half dozen or so in our group. “No, let’s find some American food,” one of them pushed back. “I don’t eat any of that weird stuff,” he said. They weren’t even willing to do something as simple as trying foods from other cultures. We ended up getting burgers and fries at a chain restaurant in a suburban shopping center, because that’s what they were used to and comfortable eating.

I know that the story about us debating which restaurant to eat at may seem petty and silly, but it was telling to me. Many on the right are so closed-minded and resistant to different people that they couldn’t even bring themselves to try the food from different cultures! Honestly, it was the little things, like that, that put everything into context for me.

Another story of their discomfort with cultural diversity happened the day before the New Hampshire primary in 2012. The organization for gay conservatives I started, GOProud, was hosting a breakfast in Manchester. We had a cute invitation printed up that was funny and campy, and it had big pink letters on it. One prominent conservative complained to us because it was “too gay.” They told me that invitations for conservative events should be red, white and blue. The cultural differences that we have as gay people, even though we agreed on public policy, made them uncomfortable.

That rejection of cultural differences explains the likelihood that Donald Trump will be the Republican nominee for president. He demonizes people who are different to play on the GOP’s fears and discomfort with others. He promises to put “Americans” first. Of course, that means Americans who are like him. In Trump’s America the Mexicans will be deported, the Muslims will be banned, and gays won’t be able to be married. Then, America will be great again!

The Republican rejection of multiculturalism is why the GOP front-runner was afraid to unequivocally condemn the Ku Klux Klan, the white supremacist organization, in his interview on CNN’s “State of the Union” on Sunday. That cultural disconnect is also why Trump’s Republican Party will fail to win a national election ever again. A coalition that includes bigotry is untenable. They can’t win again because that’s not who Americans are anymore. Today, most Americans embrace and celebrate our new modern multiculturalism, and candidates who don’t are simply unacceptable to us.