Iceland is sending its white-collar crooks to jail. Meanwhile U.S. bankers are yet to answer for their crimes 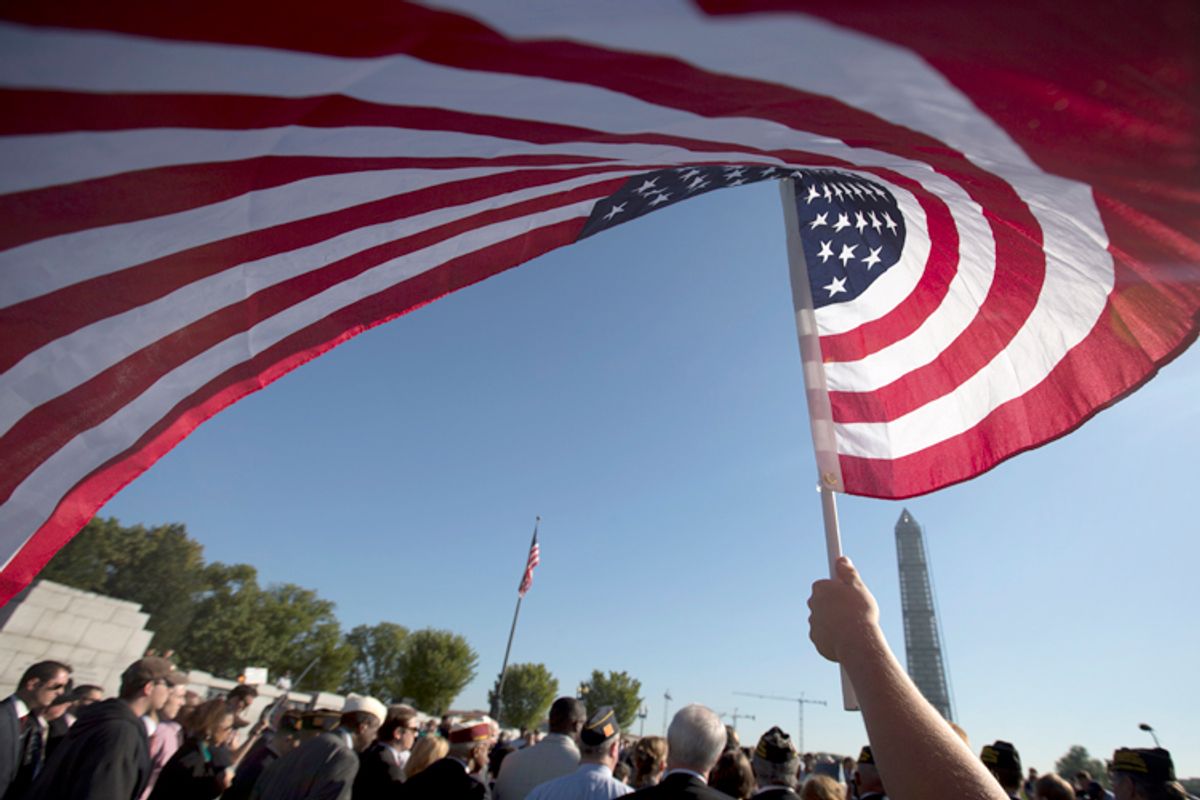 The Presidential candidates have been sounding off for almost two years now, pointing out (or in many cases manufacturing) all of America’s problems, and offering solutions they believe will make them the next President. The candidates, especially to the right of the political spectrum, extoll America as being exceptional, and they score empty points with voters by talking about how the rest of the planet looks to the United States to solve the world’s woes. It is surprising, then, to see how many of these seemingly intractable problems are being far more effectively tackled by the countries we are supposed to be “leading”. Maybe it’s time for America to start looking elsewhere for innovative solutions.

Here are 10  examples of problems being solved everywhere but in America:

In 2013, in Peru, only about two-thirds of the 25 million people had access to electricity. The Peruvian government decided to do something about it, and instituted a program to provide free solar energy to the underprivileged. With the goal of providing at least 95% of Peruvians with electricity, Peru began the National Photovoltaic Household Electrification Program, installing free solar panels in impoverished communities. The program, which is expected to be completed by next year, has so far installed almost 15,000 photovoltaic systems.

In the wake of the collapse of the housing bubble in 2008, it was not only the United States that almost fell into a deep economic depression. The same criminal activity our banks engaged in, inflating the housing market and gambling away our money while saddling crippling debt on untold millions, was also occurring around the world. One country in particular, Iceland, almost imploded. It had a far different response to the crisis, however.

At the same time that the United States was bailing out our “too-big-to-fail” banks, Iceland was letting them suffer the consequences of their greed, namely bankruptcy and failure. Instead of bailing banks out, the Icelandic government bailed out homeowners by forgiving mortgages that were overvalued. While it is arguable whether a similar course of action would have been advisable in the far-larger United States, it may be more important to note that Iceland began prosecuting actual people who propagated the illegal activity. Unlike the U.S., where exactly zero bank executives have answered for their crimes, and prosecutions for white-collar crime are at a 20-year low, 26 bankers in Iceland have gone to prison for their misdeeds.

While the United States may be the richest nation on the planet, more than 15 million children go to bed hungry. Digest this fact while also noting that 133 billion pounds of food, fully a third of the available supply, goes uneaten, eventually ending up in a landfill. France, facing a similar problem, made a very simple decision: stop throwing the food away. As of early this month, it became illegal in France for large grocery stores (4300 square feet or more) to throw out unsold food. Instead, French groceries must contract with charitable organizations, which will be responsible for collecting and redistributing the food to the needy. The law also mandates educational programs in schools to raise awareness among children about the problem of food waste.

Americans are the most overworked employees in the developed world. Even though the traditional work week for American workers is 40 hours, the average actual number of hours they work has crept up to 47 hours a week, almost a full extra work day. And while Americans are also among the most productive workers in the world, most social scientists will point out that many hours a week are wasted by employees who are simply burnt out and unable to focus for so many hours.

Sweden thinks it has a solution. A trial six-hour work-day has been instituted by several Swedish companies. Accepting the premise that eight hours is too long to be able to focus on work-related tasks, participating companies believe that six hours is sufficient time to accomplish productive work, minimize employee burn-out and enhance the work-life balance. The hope is also that by shortening the work-week, new employment will open up from companies that by necessity need more man-hours. While the trial is ongoing, results so far are promising.

Although several states in America have legalized growing and selling marijuana, on a federal level weed is still illegal, as are many other mood-altering substances. The criminal prosecution of drug offenders has resulted in a bloated prison population and has devastated African American and Latino communities, who have borne the brunt of the prosecutions. A solution to our drug problem might be found in Portugal, where drug use (not trafficking) has been decriminalized since 2001. Although still illegal, drug users are not criminally prosecuted. Instead they are given a summons to appear in front of a “dissuasion” panel, which determines the depth of the offender’s drug problem, and may order health or social counseling, drug treatment, or may render a fine. Since decriminalizing drugs, Portugal has experienced no increase in drug use (the usual canard dragged out by the anti-drug forces), and in fact, drug use by adolescents has decreased since 2003.

Imagine the hullabaloo in the United States if, instead of arresting heroin addicts and throwing them in prison, bloating the system with non-violent offenders, and devastating families, we treated them like the ill persons that they are. Ireland, in the throes of a serious drug addiction plague, plans to show us what that might look like. Beginning this year in Dublin, the Irish government will be decriminalizing the personal possession of small amounts of heroin, cocaine, and other previously illegal drugs. In the case if heroin, medically supervised injection rooms will be set up for addicts to shoot up in the presence of doctors who may actually be able to help them. By removing drug addiction from the jurisdiction of the criminal justice system, the Irish politician Aodhán Ó Ríordáin told the Irish Times, “society will be saying, 'the substance is illegal, but you are not a criminal for taking it'."

The helicopter parent is ever-present in the United States. It seems children aren’t allowed to walk anywhere by themselves, play by themselves or be left to themselves. Parents who do allow such self-sufficiency in the U.S. are actually looked upon as negligent. Some have even been arrested for the crime of letting their child play alone in a playground.

In Japan, there is a vastly different attitude about children. Japanese parents instill a sense of self-sufficiency early. Contrast that with the warnings from American parents that every stranger is a potential child molester. Japanese children barely out of kindergarten can routinely be seen walking alone. It is common for school children to walk to and from school by themselves. Children are taught that they may rely on the group to help them if they need it, and the very number of children walking alone fosters the perception of safety, and in fact, safety itself. An old Japanese proverb is apt: “Send the beloved child on a journey.”

Certainly in the U.S. strides have been made on gender equality. Women are no longer expected to be barefoot and pregnant. Women in the workforce are an accepted norm. Still, the glass ceiling remains intact, with women making on average far less than men in earnings (78 cents for every dollar), despite being more likely to have a college degree. Male CEOs far outnumber female. The U.S. remains one of the only developed countries to lack paid pregnancy leave. Political representation is far below the 50% of the population that women represent. And still no female president. Of the 197 constitutions across the globe,165 of them—or about 84%—explicitly guarantee gender equality, the WORLD Policy Analysis Center reports. Not the U.S. constitution.

In Sweden, they take a more enlightened approach. "Gender equality is one of the cornerstones of Swedish society," Sweden's official gender equality website states. Every 16-year-old child in Sweden has been given a copy of a renowned book by the Nigerian author Chimamanda Ngozi Adichie, called We Should All Be Feminists. The Swedish organizations behind the book distribution want to explicitly prompt a discussion and awareness of gender equality and feminism. “This is the book that I wish all of my male classmates would have read when I was 16,” Clara Berglund, chair of the Swedish Women’s Lobby, told the Guardian newspaper. “It feels so important to contribute to this project. It is a gift to all second-grade high-school students, but it is also a gift to ourselves and future generations.”

9. Israel: water can be managed.

California, Texas and the American Southwest have been struggling with a years-long drought that has left them with water shortages just short of catastrophic. As the domestic water table recedes, and climate change becomes more and more apparent (except to a politically expedient Republican Party), water management has become a priority that America must master or face the eventual horrific consequences. For lessons, we might turn to Israel.

Situated in the parched Middle East and comprised of half-desert, Israel itself was on the brink not many years ago. In 2009, after seven years of drought, there was a very real danger that Israelis would turn on the taps and no water would come out. The solution was three-pronged. The government mandated limited use of water, even limiting the length of showers. The limits resulted in cutting water use by one-fifth. Recycling of water became public policy, with more than three-fourths of the country’s wastewater recycled and used for agricultural purposes (compare this with the U.S., which recycles only 1% of its water). The third prong was the construction of desalinization plants, which drew saltwater from the sea and produced drinkable water. Despite the concerns of some environmentalists about the effects of desalinization on the ocean, California has already partnered with the Israelis to construct a desal plant, and has implemented many of the same limits and recycling policies (13% of California water is now recycled, far more than the rest of the U.S.).

Almost a third of the women in the U.S. have experienced physical abuse from their spouse or partner, according to the CDC. More than 22% of these cases have been severe physical trauma. Over 19% of these women have been raped. It is likely these percentages are actually low, since many abuse victims fear speaking about it. U.S. law certainly provides these victims a place to address their fears should they seek protection from physical abuse. But in this age of social media and digital apps, our laws may not adequately address emotional and psychological abuse. Increasingly, women find themselves being spied on online by their partners, or subtly or explicitly threatened through social media.

In England, the government has addressed this problem head on. A new law has been passed with penalties of up to five years in prison for abusers who seek to control or spy on their partners online or via social media. Actions that show “a pattern of threats, humiliation and intimidation” are covered under the law. "This behavior can be incredibly harmful in an abusive relationship where one person holds more power than the other, even if on the face of it this behavior might seem playful, innocuous or loving,” Alison Saunders, director of public prosecutions, told the BBC. “Victims can be frightened of the repercussions of not abiding by someone else's rules. Often they fear that violence will be used against them, or suffer from extreme psychological and emotional abuse.”