Samantha Bee's wake-up call to the left: “Full Frontal” is a desperately needed slap in the face

Last night, Bee didn't just take down a Texas antiabortion lawmaker, she pushed NARAL to get angrier, too 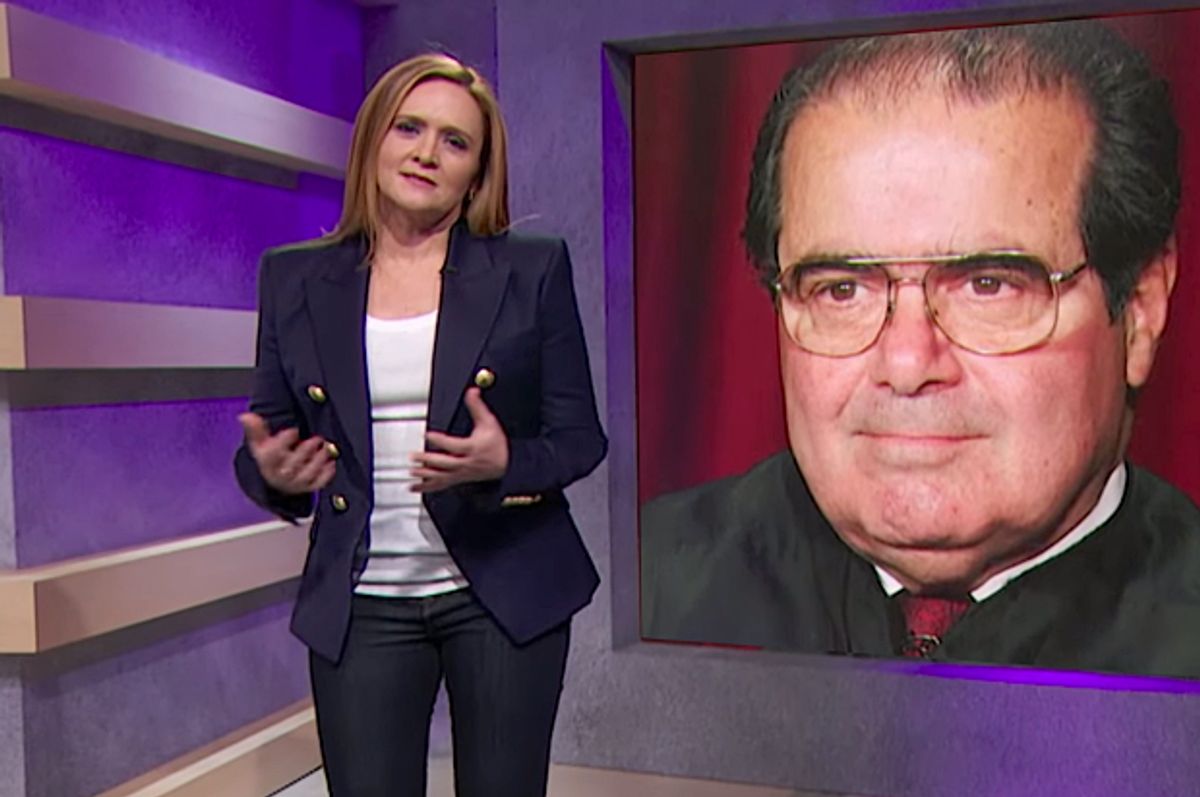 On last night’s “Full Frontal,” host Samantha Bee asked a Texas state representative, “Have you thought about regulating the safety of back alleys? Because that’s where a lot of women will be having abortions now.” It was an explosive moment, and one that the Internet has seized on this morning as articulating a fury about abortion rights that has been absent from the Democratic debates and the national conversation. Bee was speaking to Rep. Dan Flynn, one of the authors of House Bill 2, the omnibus abortion bill famously filibustered by Wendy Davis before it became law in Texas—and one that has been challenged in court to the point that the Supreme Court is expected to hear opening arguments sometime this week. With the bench one justice down and the country’s political dialogue enmeshed in the polarized, acrimonious dialogue of primary season in a presidential election year, this decision is going to be even thornier than just any decision on abortion rights in America.

Flynn’s response is what makes the segment horrifying—an exercise in obfuscating doublespeak that is entirely wrong about the effects of closing abortion clinics and he doesn’t care to hear what Bee succinctly called “reality.” He tells her, with a huffy smile on his face, that he doesn’t believe that women will turn to alternative and riskier means to attempt to terminate their pregnancies. In what became characteristic in her role as senior correspondent on “The Daily Show,” Bee matches Flynn’s ignorance with her own showily feigned idiocy. The two exchange “I think you’re wrong” “I think you’re wrong” “I think you’re the wrongiest wrong” for what seems like endless iterations. Bee, cheesy smile plastered on her face, firmly tells Flynn he’s done more than enough for the cause of women’s health.

“Full Frontal” has quickly become must-watch television, and partly, that’s because of some of the obvious and marketable details of the show: Bee, as the only female late-night host, and the first of a news satire show, has a perspective on politics that feels unique, fresh and vital; and because she’s a “Daily Show” alum herself, with other alums on her staff, the show can deliver a recognizable cadence of education, information and righteous indignation, in just 22 minutes of tightly edited runtime.

But what wasn’t necessarily predictable, when Bee and showrunner Jo Miller debuted their show last month, is just how far “Full Frontal” would push the envelope. Listening to the live audience react to “Full Frontal” is nearly as entertaining as watching Bee deftly turn out a segment. It’s not just laughter; it’s an engaged, focused enthusiasm, like the sounds people make on a roller coaster. The audience is often gasping with surprise, or whooping, as if they’ve been hit with a ton of bricks. It is the reaction of an audience who—even though they know Bee and know something about the show—are truly shocked at just how far “Full Frontal” is willing to take a joke. In last night’s episode, Bee tacked on a random comment about genital warts to a joke about Congress’ approval rate that had this kind of effect— she called the affliction “sexy Braille”—before showing a rhinoceros taking a massive dump, as a metaphor for Republicans’ policy actions starting in 2010.

It’s both Bee’s singularity in the field and her wicked, fearless brand of humor that make “Full Frontal” so addictive—I saw lamentations on Twitter, after the debut, when it became clear that the show was not daily, but weekly. Those protestations are rivaled only by the confusion expressed by nearly everyone that “The Daily Show” didn’t tap her as its successor to Jon Stewart.

And an excellent example of her powers was on display last night in the correspondent segment, where Bee combined both her possession of and investment in her uterus with that trenchant point-of-view when she spoke to both Ilyse Hogue, president of NARAL Pro-Choice America, and Rep. Flynn. Hogue explained HB2 has forced all but 10 abortion clinics in Texas to close through prohibitive over-regulation, and described what that regulation looked like, when enacted in practice. But then Bee took the segment to a place I didn’t expect. She exhorted Hogue—and, by extension, the mainstream pro-choice movement—to get angrier. Through farce, naturally. The exhortation took place in the form of a shark dressed up as Ruth Bader Ginsberg (it kind of made sense, in context, but then again, not really) and WNBA coach Stephanie White, who threw chairs around in a mini head-coach snit-fit before delivering a stirring if boilerplate pep talk. Hogue exited from the room in apparent exultation, running as if pumped to victory.

And this is the final piece of Bee’s success, in the form of a dancing shark and a hired WBNA player: She isn’t afraid to bring the blame home, if that’s where it lies. In the first segment of the show, which presented a newsier rundown of recent events, Bee observed that the reason the country is in the state it’s in is because the Democrats who turned out for President Barack Obama in 2008 didn’t bother to turn out again in 2010, ushering in a wave of hard-right freshman Republicans who have obstructed legislation and mucked up Congress ever since (cue rhino-pooping.gif). She directly addressed “you”—the audience in the room and the viewing audience, at home. Bee is not giving anyone a pass. And that makes her more trustworthy and authentic than nearly every other late-night host right now, who are all eager to charm their audience into good ratings. Bee offers something sharper, but it’s so much more vital; it’s a wake-up call.