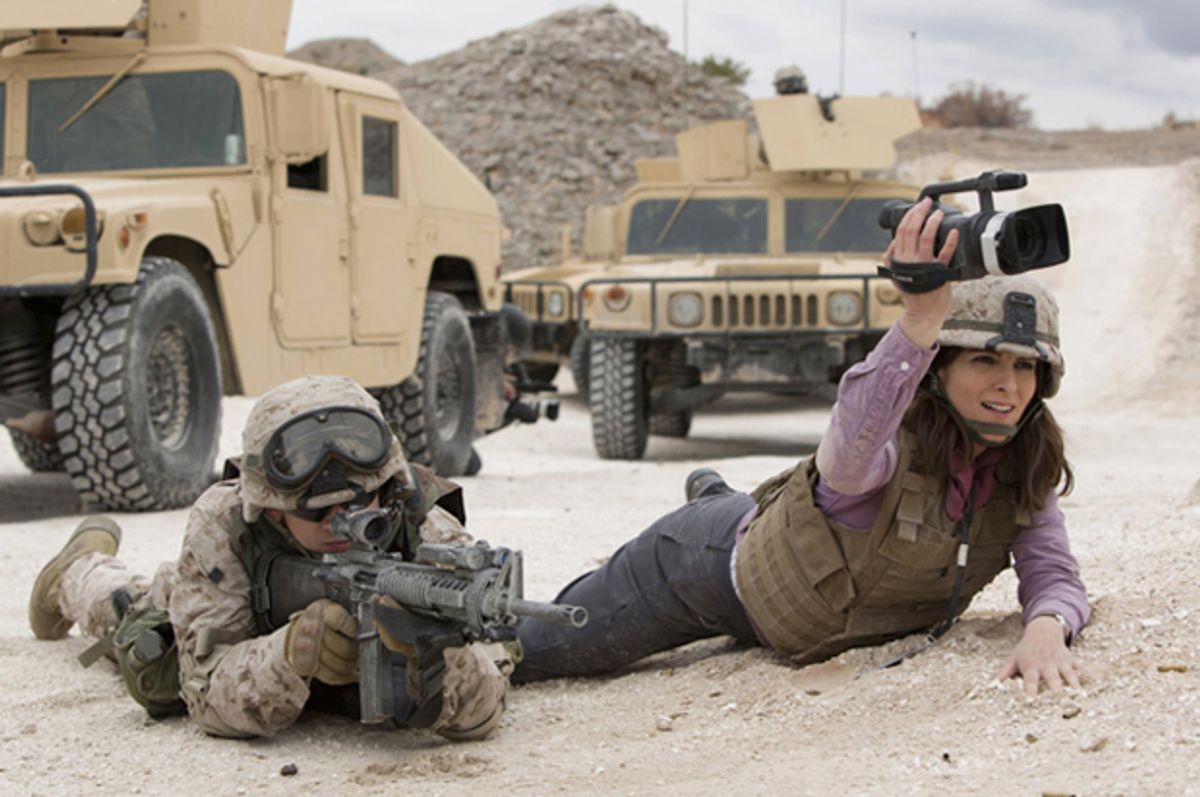 Paramount Pictures seems to have no idea what to do with the new Tina Fey movie “Whiskey Tango Foxtrot,” which is understandable. This is a difficult film to describe, and it’s easier to list all the things it isn’t — for example, it isn’t a spoof or a satire or a farce or a rom-com — than defining what it is. In fact, “Whiskey Tango Foxtrot” is a surprisingly delicate creation, especially for a studio movie built around a famous TV comedian. There are no Sarah Palin impressions or gratuitous “30 Rock” references to be found here, and to the extent Paramount is trying to sell “WTF” as an “SNL”-flavored laff-riot they’re doing its star a grave disservice. If anything, it feels as if Fey is emulating the example of Kristen Wiig, who has reconstructed her career with a series of disparate comic and dramatic film roles.

So what is “Whiskey Tango Foxtrot,” you ask in exasperation? As Ted Cruz says 164 times a day, that’s a very good question and I’m glad you asked. First of all, it’s based on “The Taliban Shuffle,” a memoir by journalist Kim Barker about her experiences as an ill-prepared war correspondent in Afghanistan and Pakistan. When Michiko Kakutani reviewed the book for the New York Times, she described Barker’s self-presentation as a zany, Tina Fey-like character. Fey read that review and then read the book and got together with “Saturday Night Live” producer Lorne Michaels to acquire the rights, and here we are! That’s an entirely unlikely origin story for a movie, but “Whiskey Tango Foxtrot” has an air of care, generosity and sincerity throughout that makes me believe it’s true.

So in practice the resulting film, in which Kim Barker the print journalist has become Kim Baker the TV journalist (because cameras are sexier than computers), is a character-based dramedy that leans more toward drama than comedy, and almost never reaches for laugh lines. There are a few good chuckles, but you won’t rip out those hernia stitches and your hilarity-meter will remain unbusted. It’s an unassuming feminist fable about an unexceptional “American white lady” (in Kim’s words) who reinvents her life, and a somewhat realistic war film with notes of pathos and tragedy that seeks to avoid going too dark. It’s “Eat, Pray, Love” meets “Zero Dark Thirty” in “The Year of Living Dangerously.”

I recognize that description may sound intriguing to some potential viewers and unbearable to others, so let me hasten to add that the mixture of ingredients is always unstable. I was never bored by “Whiskey Tango Foxtrot,” and never felt sure where it was going next. As the marketing folks at Paramount know perfectly well, those are not necessarily good things when it comes to selling a mass-market multiplex movie. Most Saturday night ticket-buyers specifically do not want to see something unconventional or unexpected; they want to see a story they already know, told with a few new twists.

On one level, nothing could be more familiar than the tale of a mildly depressed middle-class woman who chucks it all away in her 40s and heads out in search of romance and adventure. But Fey’s deeply committed performance makes the uncertainty of Kim’s self-reinvention come alive; she’s a real person trying to live through each moment as it comes. Kim is never quite sure why she makes the decisions she does, and is only intermittently able to be the sardonic observer of her own life typically demanded by the post-“Bridget Jones” genre. Credit also goes to screenwriter Robert Carlock, whose adaptation of Barker’s book evades all the usual clichés, and even more to the oddball directing duo Glenn Ficarra and John Requa, whose films are good, bad and weird in roughly equal proportion, but always worth talking about. (They made “I Love You Phillip Morris” with Jim Carrey and Ewan McGregor as con-man lovers, the upside-down rom-com “Crazy, Stupid, Love” with Ryan Gosling and Steve Carell and, more regrettably, the campy Will Smith crime caper “Focus.”)

Once Kim finds herself in the “Kabubble” circa 2003 — the tight-knit, hard-partying circle of Western journalists, spooks and private contractors conducting or covering the Afghan conflict — she is surrounded by several stock characters, but even those are memorably rendered. Margot Robbie plays the sexually voracious Aussie TV babe who assures Kim that even if she’s no better than a 6 or 7 at home, she’s easily a “Kabul 9.” Martin Freeman plays the lady-killing Scottish journalist who becomes Kim’s lover in a hilarious, awkward and highly realistic sex scene (a Ficarra-Requa specialty). Billy Bob Thornton plays the hard-bitten Marine officer who comes to appreciate that Kim “has got some.” Alfred Molina plays the jovial, corrupt Afghan bureaucrat installed by the Americans, who keeps trying to get into Kim’s knickers. Wait, hang on — what did I just say?

It’s fair to say that the representational politics of this situation are complicated: Afghans are not Arab or Persian or South Asian; they come from diverse tribal and ethnic backgrounds and some of them have light skin and fair hair. But the fact that the two significant Afghan characters in “Whiskey Tango Foxtrot” are played by Molina, who is British, and Christopher Abbott, who is American, strikes me as at least a question mark in 2016. Yes, both men are terrific actors and both are of Mediterranean ancestry; neither jumps out as inappropriate on-screen. Whatever artistic or business decisions may have been involved are invisible to us, but I wonder whether the film’s directors and producers (i.e., Tina Fey and Lorne Michaels) even thought about this as a potential problem. The fact that Molina’s character is a gross, boorish caricature who seems out of whack with the movie around him doesn't help.

Whether you view that issue as a crucial flaw or a minor footnote, it points to the fact that “Whiskey Tango Foxtrot” is a likable construction that points its star in a new direction without ever quite making a point. There’s a freshness and an unjaded quality to almost every scene that makes you want to keep watching, and in the sudden eruptions of terrifying violence (sometimes set to schmaltzy ‘70s pop) you can feel Ficarra and Requa reaching for a little of Robert Altman’s “M*A*S*H” and a little of Stanley Kubrick’s “Full Metal Jacket.” I badly wanted this to be the wry antiwar comedy about America’s recent misadventures that no one has made, and there are moments when it almost gets there. In the end, the story of Kim Barker’s reinvention has become the story of Tina Fey’s reinvention, in a movie that has no obvious role to fill in the cultural economy.