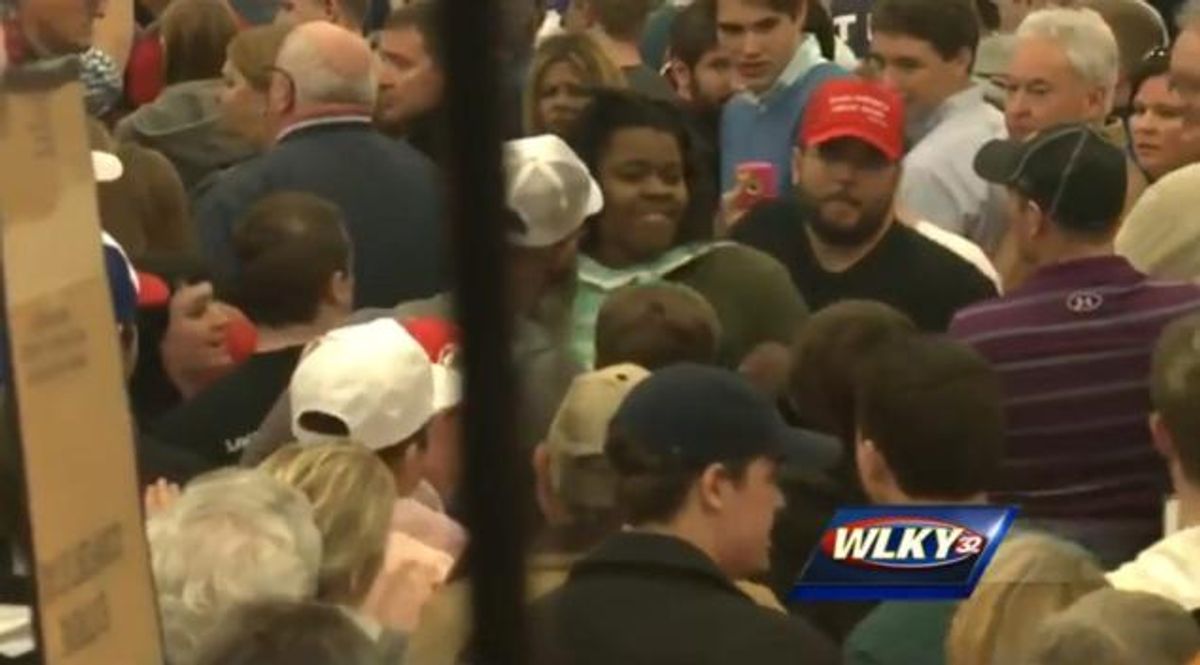 Donald Trump's campaign rallies have taken on a violent tone for quite some time now. Last November, a Black Lives Matter activist was roughed up by the crowd at a Trump rally in Virginia. Immigration activists were accosted back in October. But now that Trump himself is openly flirting with right-wing racial agitators, the proverbial dog whistle has served as more of a rallying cry for avowed racist to flock to Trump rallies as means of openly expressing their unabashed hatred.

In his endorsement, non-endorsement of Trump last week, former Klu Klux Klan grand wizard David Duke instructed his followers to help Trump get elected president in an effort to protect "heritage" and boost an ally. "Go in there, you’re gonna meet people who are going to have the same kind of mindset that you have," Duke said of Trump's campaign headquarters and rallies.

On Saturday, "pro-white" radio host James Edwards attended a Trump rally in Memphis as a fully credentialed member of the press. Edwards, an avowed white nationalist, has hosted KKK and Neo-Nazi members on his "Political Cesspool" show and called slavery the best thing to ever happen to African-Americans.

"I’ve been saying for years on the radio that the majority of Americans fundamentally agree with us on the issues and that the neocons were generals of a phantom army. I am being proven right. Our people just needed a viable candidate and they’ve identified Trump as that man," Edwards wrote in a recent blog post gushing about the Trump rally.

Trump's recent dirty dance with the KKK has also attracted detesters to his rally, like a group of Black Lives Matter activists ejected from a Trump rally in Virginia this week and the group of 30 black students who were profiled at a Trump rally later that day in Georgia and escorted out.

At a Trump rally in Louisville, Kentucky, on Tuesday, another notorious "pro-white" activist was caught harassing and pushing a young African-American woman. The man, wearing Trump's signature red “Make America Great Again” hat, can be seen pushing the women in video captured at the rally along with a host of other angry Trump supporters:

Things getting a little heated at the Trump rally pic.twitter.com/X974Ih3tZI

Matthew Heimbach, who the Southern Poverty Law Center describes as "the face of a new generation of white nationalists," boasted in a blog post that he was one of the men helping to "drive out" the protestor from the rally.

“[Video] features yours truly helping the crowd drive out one of the women who had been pushing, shoving, barking, and screaming at the attendees for the better part of an hour."

"White Americans are getting fed up and they’re learning that they must either push back or be pushed down" to Black Lives Matter activists, Heimback wrote:

The woman, University of Lousiville student Shiya Nwanguma, said she "was called a n**ger and a c*nt" by the crowd of Trump supporters:

Heimback is a supporter of the Traditionalist Worker Party and is a well known "pro-white" activist who started a white student union at Towson University in 2012 and has defended his platform on national platforms like "Nightline."

Watch the pattern of violence that has taken hold of Trump's political rallies: