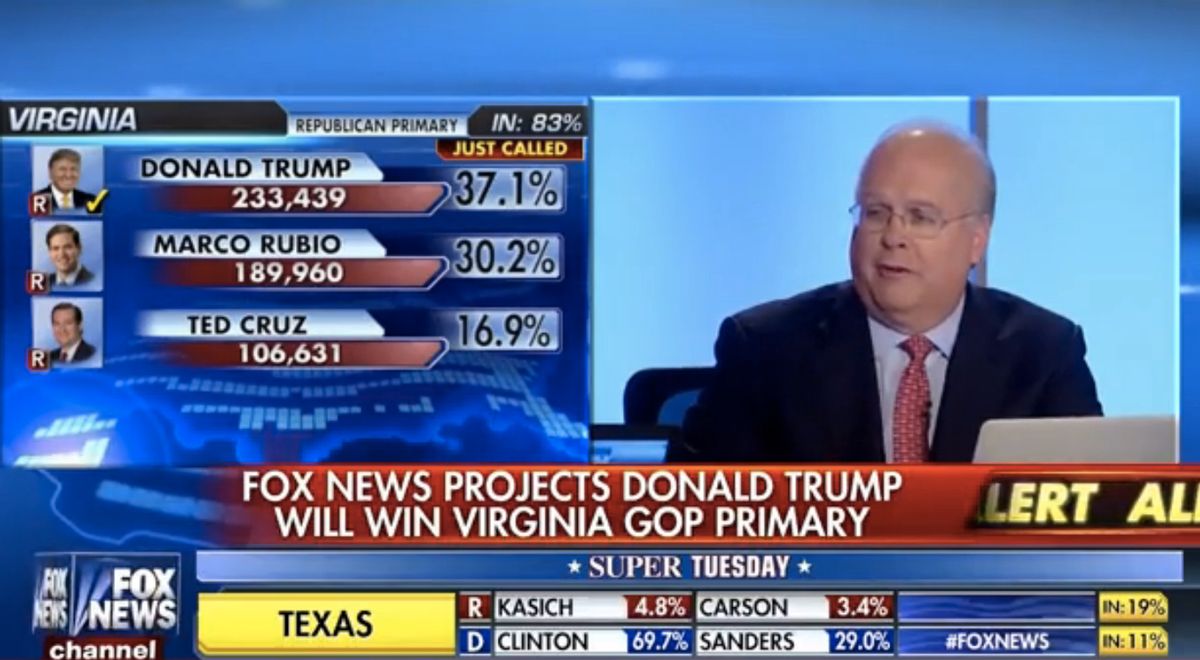 Who could ever forget Karl Rove's epic on-air meltdown the night of the 2012 general election vote? The Republican oracle suffered a stunning slap back to reality when Fox News anchor Megyn Kelly repeatedly insisted that Barack Obama, not Mitt Romney, won in Ohio.

Well, if you have no other reason to subject yourself to cable news election night coverage, especially Fox News as a billionaire megalomaniac takes control of the Republican Party, Kelly dousing Rove with another round or reality is surely worth the torture.

It happened again on Super Tuesday. The former George W. Bush political adviser clearly fancies himself such a reliable prognosticator that he found his way back to the Fox News studios and set himself up for embarrassment squarely in front of the cameras.

“Well, I think this race is going to continue to tighten,” Rove boldly predicted of the Republican race in Virginia. Seconds later, Rove was interrupted by host Chris Wallace with the truth.

“Wait, wait, hold on just a second," Wallace told Rove. "Apparently we’ve got a call in Virginia, so you can tell us after we get the call.”

Enter Megyn Kelly, who facelessly announces Donald Trump, not Marco Rubio whom Rove had been boosting minutes earlier, as the winner in an upset.

Barely holding back his uncontrollable laughter, Wallace returns to Rove: “Karl, tell me, what does that mean for Marco Rubio and Donald Trump?”

Watch Rove humiliated live on Fox News, yet again, via Slate below: