Back off, men—they're scientists: New "Ghostbusters" trailer gets slimed by sexist trolls 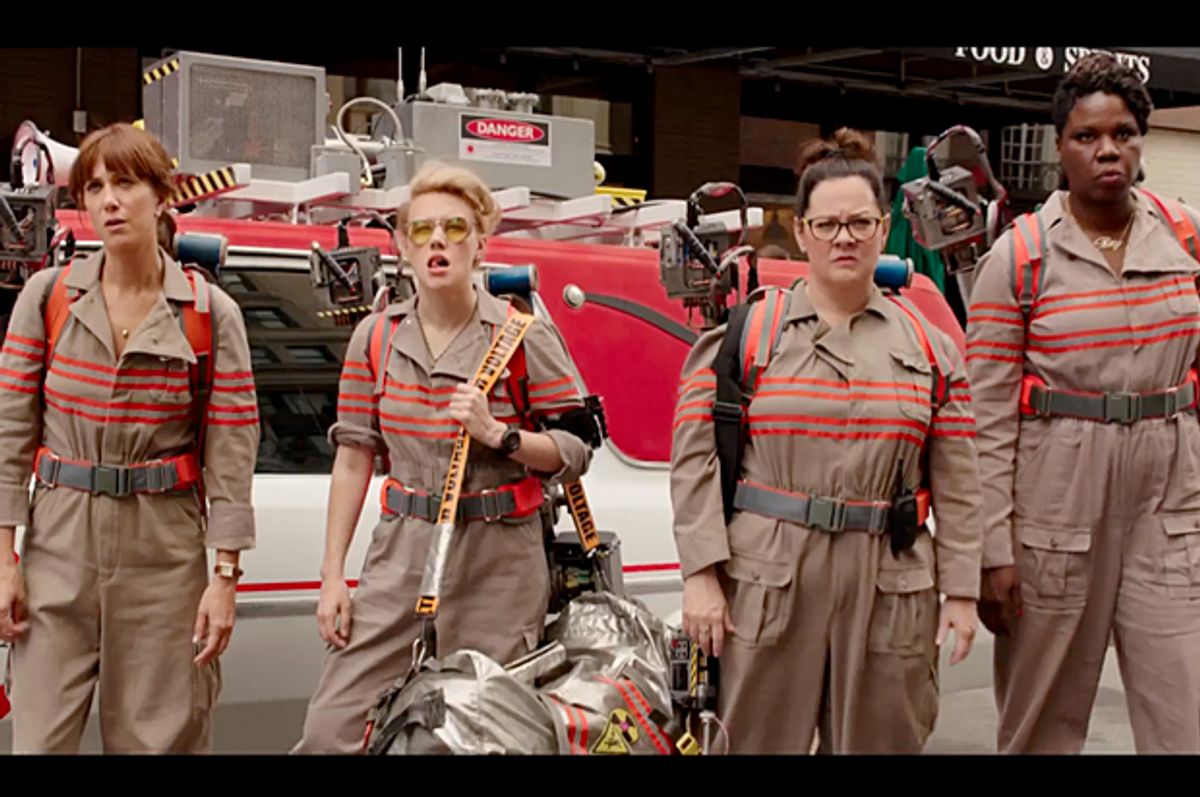 The good news: The trailer for the new “Ghostbusters” is out, and Kristen Wiig, Melissa McCarthy, Kate McKinnon, and Leslie Jones looks like they'll make this movie as funny and ironically goofy as the original. There are winking references to the first film and movie in-jokes, like an “Exorcist” riff. McKinnon, in the Bill Murray role, is especially winning, and some of the original stars will make cameos in this one.So what's not to like?

The bad news: The “Ghostbusters” haters who have trolled the project are likely to come out in force again. In fact, they’ve already gotten started.

It’s one thing to be frustrated with the huge number of reboots and sequels that Hollywood has turned to over the last decade or so. (I sure am.) And not everyone thinks the trailer is funny.

Some of the backlash is simply the dark side of geek culture. It’s thinking that your image of a film or a character is so sacred that you can’t see it rethought for any reason.

But the complaints are not amateur film criticism – and they didn’t do this when J.J, Abrams rebooted “Star Trek.” The main gripes are coming from guys who are pissed off that women are in the film, and who are angry at director Paul Feig for making it that way, even though they're trying to disguise their motivations.

Here are a few that went up soon after the trailer dropped.

And doesn’t this one seem a little extreme?

So let’s try to get at what’s really going on here. The objection seems to be – when it’s not just old-fashioned misogyny – that this film was made to score some kind of feminist “point.” Given that most movies are made to earn money for corporations, this doesn’t seem like the most craven reason possible for inaugurating a film production. But if it was, is that the worst idea ever?

As freelance writer (and Salon contributor) Caryn Rose puts it:

But the new “Ghostbusters” – at least from the evidence of the trailer – does not feel didactic or explicitly political. It feels sly and knowing and funny. (If it was truly progressive, even, wouldn't the filmmakers have made Leslie Jones' character a scientist like the white women are?)

There are certainly some jokey references to its female perspective – USA Today gets at a few of them here. But is this really enough to drive a secure man crazy?

When “Ghostbusters” haters came out last year and started dissing the film – on the evidence of nothing but its casting and a few stills – director Paul Feig fought back sharply.

“There’s a group of guys [who saw it at] 8 or 9 years old,” Feig said at South by Southwest. “All these guys grew up with it and it became this real male bonding thing… You can’t believe it’s 2015, especially with all the Gamergate stuff—everything’s f--ked up.”

Later, he sent a series of angry tweets.

It’s hard to tell from the trailer – maybe the movie will be dumb, unfunny, too long, boring, whatever. But at this point I’m hoping Paul Feig sweeps back in and shuts down the haters all over again.