"Both-sexual" men on TV can save lives: How “Crazy Ex-Girlfriend” is smashing the "evil bi guy" myth

Bisexual women abound on TV, but bi men are usually portrayed as sinister—or at least too shady to date 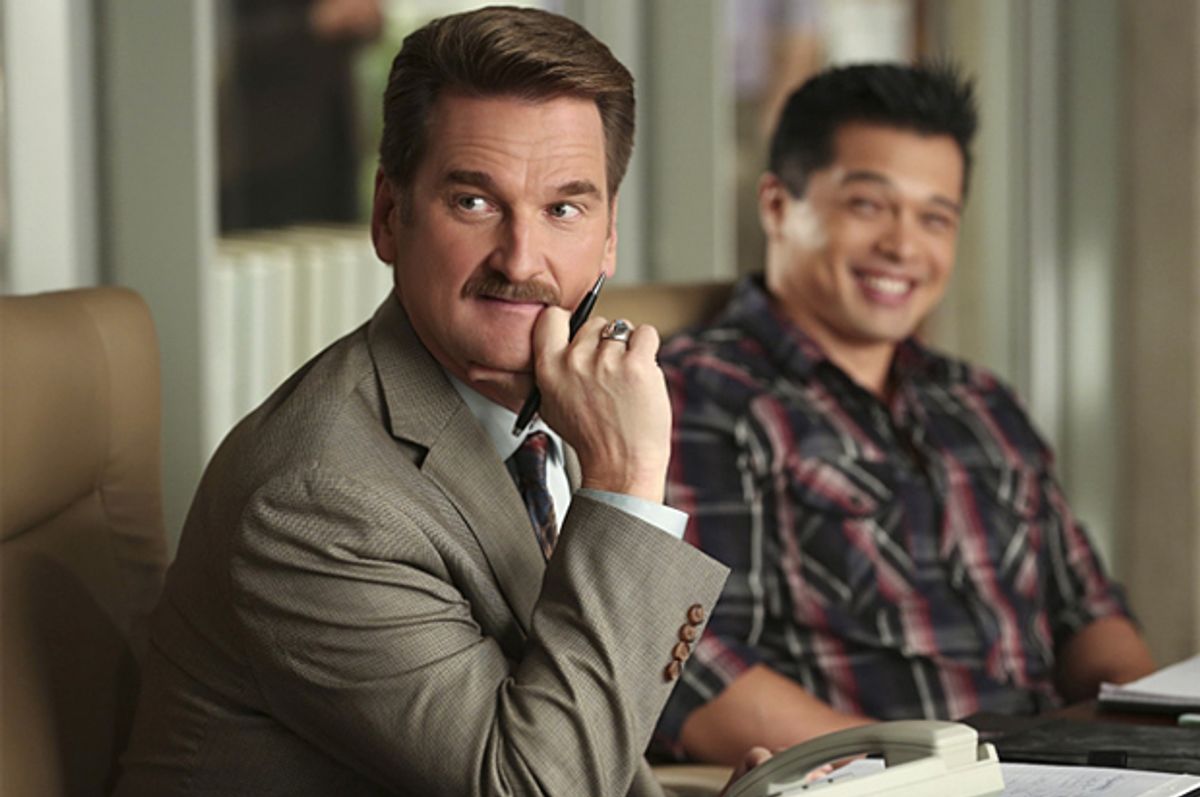 TV’s most offbeat show may also be one of its most quietly groundbreaking. “Crazy Ex-Girlfriend,” the acclaimed musical-comedy currently airing on the CW, is notable for featuring one of the few Asian male romantic leads on television: Vincent Rodriguez III plays Josh Chan, the Filipino object of Rachel’s affections. And in recent episodes, “Crazy Ex-Girlfriend” introduced its first bisexual character. Darryl Whitefeather, Rachel’s charmingly clueless boss, came out as “both-sexual” after realizing that he has feelings for White Josh, a member of Chan’s posse.

Darryl’s realization makes him just one of a handful of out male bisexuals on television, in a medium where fully developed fluid characters still remain sadly rare. In GLAAD’s most recent “Where We Are on TV” report, the LGBT media watchdog group noted that the number of male bisexual characters had increased—especially on cable television—but they are vastly outnumbered by their female counterparts. If bisexual characters account for just 28 percent of LGBT representation on television, women outnumber men by a more than 2-to-1 ratio.

If it’s getting better in terms of volume, the quality is often just as poor as ever. Whether the character is male or female, bisexual representation has long failed queer audiences, resorting to tired tropes and damaging clichés. According to Flavorwire’s Tom Hawking, women are depicted as “identikit temptress/femme fatale types who exist for the temptation of straight men.” Characters like Catherine Tramell in “Basic Instinct” exist not for the purpose of their own sexual agency but to titillate male viewers. In the film’s most famous scene, Tramell (who is going commando) casually flashes the audience her beaver during an interrogation scene.

On the opposite end of the spectrum, men are often erased entirely. Back in 2011, Josh Eidelson wrote in the Daily Kos that it was extremely difficult to find a single male bisexual character on television. Five years later, that visibility has increased ever so slightly. Freshman drama “Mr. Robot” introduced Tyrell Wellick (Martin Wallström), a sociopathic executive who works for E Corp, a company the show’s protagonist, Elliot (Rami Malek), refers to as “Evil Corp.” In one episode, Tyrell seduces a male office worker to gain access to his phone—in order to bug the device with spyware. Tyrell later kills him.

If the company’s nickname is any indication, male bisexuality is often explicitly connected with villainy. Another notable case is Frank Underwood, the cutthroat antihero at the center of “House of Cards.” According to Underwood, “sex is power,” and his sexuality is less about his orientation or actual pleasure than his desire to accumulate as much political power as possible. The idea is that he’ll do anything to get what he wants—including sleep with another man. The Daily Beast’s Amy Zimmerman argues that this mind-set quietly “pushes him back into the closet.” “Sexuality is one of his tools, but the show stops just short of saying that it is part of his identity,” she writes. “House of Cards isn’t afraid of sex, but sexuality is another matter.”

Shows like “Revenge,” “Halt and Catch Fire” and “Penny Dreadful” have introduced sexually fluid men who transcend stereotypes, but they remain the exceptions to the rule. When male bisexuals are not presented as evil, deceitful or an “overly sensual libertine”—as Zimmerman describes the brothel-loving Prince Oberyn of “Game of Thrones”—they are mocked and dismissed. On “Sex and the City,” Carrie Bradshaw called male bisexuality “a layover on the way to Gaytown.” On “Glee,” Kurt made the same argument: “Bisexual's a term that gay guys in high school use when they wanna hold hands with girls and feel like a normal person for a change.”

What’s unusual about both of these random acts of biphobia is that they took place on shows that made room for a number of characters of varying gender identities and sexualities—but refused to extend the same courtesy to bisexual men. “Glee” introduced viewers to several fluid female characters, including Brittany (Heather Morris) and Santana (Naya Rivera), whose relationship was a staple of the show. But when the two weren’t dating each other, they were often attached to men: Brittany dated both Artie (Kevin McHale) and Sam (Chord Overstreet), while Santana was attached to Puck (Mark Salling). Meanwhile, Samantha Jones was involved with both men and women during the six-season run of “Sex and the City.”

If television shows struggle to recognize the existence or humanity of male bisexuals, there’s potentially a reason for that: Our culture isn’t any more enlightened on the subject. As recently as 2005, a publication as venerated as the New York Times publicly propagated the “gay, straight, or lying” myth in regards to male sexuality. The Times reported on a study that purported to show that men who “identified themselves as bisexual were in fact exclusively aroused by either one sex or the other, usually by other men.” Nearly a decade later, the publication still wasn’t sure about the existence of male bisexuals, but why don’t they just ask the estimated 1.2 million men who do identify outside the sexual binary?

If pop culture tells bisexual men that they don’t exist, they’re just confused, or they’re evil and greedy, it’s nothing that they haven’t heard a million times in real life—even from other members of the LGBT community. According to the Guardian’s Owen Duffy, bisexuals are even blamed for the spread of the HIV virus. “We’re seen by some as a breed of sexual Typhoid Mary—held responsible for the transference of sexually transmitted infections between gay and straight communities,” Duffy writes.

Being viewed as both suspect and diseased has a profound impact on bisexual communities, who face higher rates of mental illness and depression than gays or lesbians. They’re also more likely to be the victim of intimate partner violence and less likely to be out about their sexuality to friends and family members—it’s estimated than 28 percent of bisexuals are still in the closet. Many of these issues begin in adolescence. As the Advocate’s Eliel Cruz reported in 2014, “only 5 percent [of bisexual youths] described themselves as 'very happy,' compared with 21 percent of non-LGBT youth.” In addition, a third had been bullied at school.

Seeking out bisexual characters on television who are depicted with care and humanity might be little comfort to students who are being harassed or beaten up because of their sexuality, and the media alone will never be the answer to their problems. However, as long as our entertainment ignores the existence of male sexual fluidity, their struggles will keep being erased and treated as if they don’t exist—much like bisexuality itself. In 2016, it shouldn’t still be so shocking to see a show like “Crazy Ex-Girlfriend” get male bisexuality right, but that’s because so many continue to get the issue so wrong.

Seeing Darryl Whitefeather fall in love with another man isn’t just adorable. It could help save lives.