Inside the Democrats' racial divide: Bernie Sanders, Hillary Clinton and the polls that prove this isn't over yet

The racial divide is real and a problem for Sanders. But outside of the South, it is also an issue for Clinton 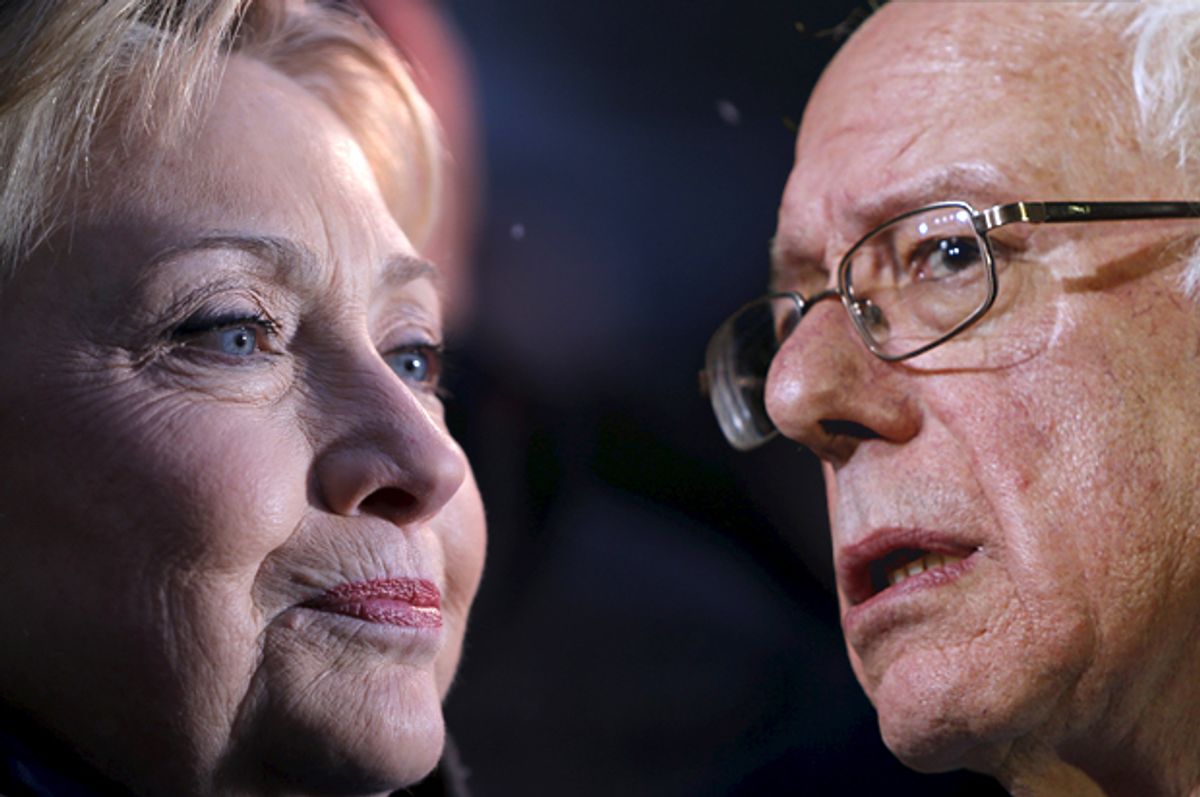 That means, altogether, that Sanders has five states (those four plus New Hampshire) and Clinton has 10 states (those seven plus Nevada, Iowa and South Carolina).

But here’s the critical thing: The elections in Nevada, Iowa and Massachusetts were either close or extraordinarily close. A little bit more time here, a little bit more organizing there, and they could easily have tipped his way. In other words, Sanders could very easily have seven states now to Clinton’s eight.

He doesn’t, and coulda shoulda woulda is just that. But what this does mean, going forward, is that we have the opportunity to turn potential into actual. We’ve got time, we’ve got organizing, we’ve got money: let’s make use of it all. Clinton’s strongest weapon is the aura of inevitability that she and her supporters and the media have concocted around her. Part of that is based on reality, part of it is based on super delegates (which I refuse to concede), and part of it is based on spin. Don’t accommodate the superdelegates, don’t accommodate the spin.

II. The exit polls in Massachusetts, which Clinton won narrowly, are fascinating. Here are some highlights:

III. I’ve seen lots of claims that Sanders is only winning because of white men; among every other demographic, he loses. That simply isn’t true. In Vermont and New Hampshire, he beat Clinton among all women voters. In Oklahoma, as I said, he nearly tied Clinton among women voters. In Nevada, he nearly tied her among Latino voters (though the experts are still debating that one). In Massachusetts, as I said, he got 41 percent of non-white voters. We don’t have any exit polls for Colorado and Minnesota (at least not on CNN’s website, which is the one I’ve been using), but given the size of his victories there, I would be surprised if Sanders didn’t win or tie with Clinton among non-white voters and perhaps women voters.

IV. The issue of race and demographics in the campaign is fascinating. There’s absolutely no question that Clinton has a commanding lead among African-American voters. She’s won that part of the electorate in every single contest thus far.

But here’s where things get interesting. Back in the fall, when the issue of the gender gap between Clinton and Sanders supporters was raised, Matt Bruenig very shrewdly pointed out that the real divide there was as much one of generation as it was one of age: Younger women voters were supporting Sanders, older women voters were supporting Clinton. A lot of the subsequent polling and primary results have confirmed his premonition.

I wonder if we’re not about to see something similar—if not quite as dramatic—with non-white voters. The cross-cutting factor here is not only age—Bruenig has also shown that younger black voters are trending toward Bernie (see the graph at the bottom of this post), and even in South Carolina, Sanders did much better with younger black voters than he did with older black voters—but also region.

Think about it. With the exception of Nevada, the states where there’s been dramatic support for Clinton among non-white voters have all been in the South. And in Nevada, Latino voters almost went for Sanders (the experts are still debating that one). But outside the South and Nevada, there have been primaries in three states that are virtually all white (Vermont, New Hampshire and Iowa), and three other states that while majority white, have more diverse populations (Colorado, Minnesota and Massachusetts). Still no exit polls from Colorado and Minnesota (at least not on CNN’s website), but in Massachusetts, Sanders got 41 percent of the non-white vote. Compared with all those states in the South, that’s stunning. So the racial divide is real and a problem for Sanders—don’t get me wrong—but it may be more complicated than people have claimed.

V. Outside the South, Sanders has won or come very close to winning every single state. From here on out, many of the states are much friendlier territory for him. Unless our brains are so completely scrambled by the Nate Silvers/Voxification of political life—where every poll is a destiny, every superdelegate a fact of nature, where everyone’s a crackpot realist rather than a citizen activist—it would be the definition of insanity to give up now. This is an uphill battle, always has been. So what? We move. Vorwärts. Always.