Scary single ladies: Rebecca Traister explains why single women frighten the hell out of the GOP 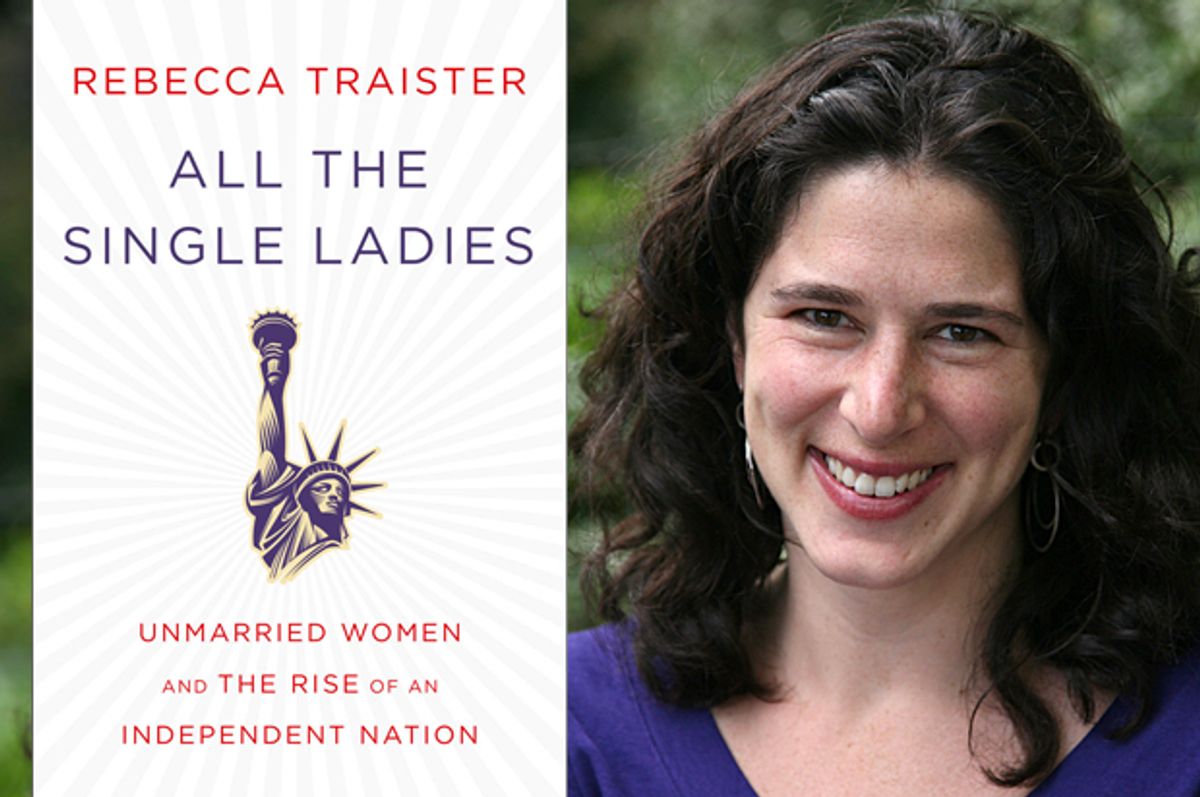 Author Rebecca Traister's last book, "Big Girls Don't Cry," took a comprehensive look at how the 2008 elections changed everything for American women. Now she's back with a similarly pop music-themed title, "All the Single Ladies: Unmarried Women and the Rise of an Independent Nation," an examination of the role single women have played in American culture, both in our history and in our current times.

Single women are a potent political force in a way that they never have been before, making up nearly a quarter of the electorate and leaning to the left of both men and their married counterparts. This, along with a whole host of inchoate fears about what happens when women are left to their own devices without male supervision, has led to a rash of conservative pundits and politicians denouncing the ladies who aren't married. I interviewed Traister about this moral panic over single women and what it means for the culture at large.

It was just a couple of weeks after his tirade of Sandra Fluke that he made those comments about another woman who had written a book. The fact that he said “white," well, there are these versions of single womanhood that we are presented and the version that threatens most, is the white, privileged women. Sandra Fluke testifying in front of Congress, women who are writing books, Murphy Brown, and Anita Hill, even though she’s not white, a lawyer appeared for Clarence Thomas.

There is a kind of woman who is economically powerful, professionally powerful who threatens a white male grip on power that has a long historic precedent in the country. Independent women living outside of marriage threaten all kinds of things about the way power is supposed to work.

What if reproduction is taken outside that version of male control? What if women are competing? You can see people freak out all the time, about the fact that now, there are more women than men in colleges, and all kinds of graduate schools. What if women are taking your acceptance letters to college? And to med school? Law school? What if they take your jobs and what if they’re going to be your boss?

When lawmakers start to make laws that hurt single women, often the women that they’re hurting the most are not the economically powerful ones. They’re not Sandra Fluke. They’re not Lena Dunham, who conservatives hate more than anybody. They’re hurting low-earning single mothers. In Wisconsin, a Republican legislator introduced a bill that would criminalize single parenthood as a form of child abuse. He claims that single parenthood, either fathers or mothers, but of course he’s talking about single mothers. There were attempts in North Carolina to enforce a delay in divorce laws, even in the cases of alleged physical abuse.

All of those are measures enacted in part out of a fear of economically powerful women, and you know, you hear these outbursts against economically powerful women. But in fact, the damage they’re doing is to the women who don’t enjoy economic power and who are profoundly affected by the cut in social welfare programs, by laws that are designed to punish them for bearing children outside of wedlock. So there is this bifurcated reaction. The people concerned like to scream about the Sandra Flukes, but the people that they punish with national legislation are not the Sandra Flukes.

It goes back to Dan Quayle castigating Murphy Brown, a fictional character, for being a wealthy single mother in the '90s, saying she set a bad example for real-life women.

It’s frustrating because I often point out that most single women, mothers or no, probably want to get married. The question is just to who. I doubt most single women have all these great guys offering but are just blowing them off.

One of the things that gets confused often is the difference between marriage and good marriage. Marriage is a theoretical concept of the institution, and “you should be married,” is actually meaningless. Marriage is pretty meaningless without the notion of having a specific person to whom you are married. So that’s why one of the reasons to “call to marry” or “call to marry early” are useless. They just don’t mean anything. Marry who? That’s going to make a difference.

One of the favorite conservative themes is that the cure for poverty is more marriage and earlier marriage. We hear that all the time; there have been billions of dollars now, between the Bush administration and the Obama administration, which has continued the marriage education program, on trying to get more people to get married. Those programs have not worked. They do not produce husbands and they do not change marital divorce rates. So far the only programs that have shown to actually do good things for marriage and divorce rates are extended welfare programs. Which has happened, sometimes accidently in certain states, where you’ve seen education and job preparation programs, where you actually bolster the economic security of people in the accidental experiment and in fact it stabilized their marriages.

It takes plenty of women a long time to actually find a partner who influences their lives. The emotional match and somebody who makes their lives better every day. So it’s also not as simple as “find another warm body.” Find somebody-- that’s the thing that Mitt Romney put in that excerpt, “marry someone.” Someone. Anybody. But what if that warm body is not somebody who you get along with. What if that warm body is someone with whom you fight all the time?

A lot of the people telling single women to marry, I think, are often suggesting that they should lower their standards. Are women’s standards higher than they used to be?

For a lot of women, marriage is no longer an economic, a social or a sexual necessity, or even a reproductive necessity. You can now do things like earn and have sex and have children without marriage. It raises the stakes for what marriage will be. Because it doesn’t have to clear this very low bar. You can have a life that is full.

It takes a very long time to find somebody who can clear a variety of higher bars. Across classes it takes a long time for many people.

The issue isn’t so much about married or not married. It’s about making room for a variety of paths, because everybody’s life entails a variety of circumstances. And roadblocks, advantages and disadvantages and crazy coincidences.

Some people are going to wind up perfectly matched with a person they grew up with and some people may never meet somebody that is a great match. Some people may actually not have the desire. Lots of people, many, many people yearn for love, yearn for partnership for sex, but there are people who actually don’t. There are people who love living alone, there are people who don’t want that kind of partnership. There’s people maybe are romantically involved multiple times or just once, and cohabit their entire lives but never get married. Or never partner with anybody or have very active and diverse sex lives, or have all those different things at different times of their lives. The deliberation is in the variety of experience, not one experience over the other.