The Mitt has just hit the fan: Why Romney's stunning denunciation of Trump matters

The 2012 Republican nominee had harsh words for the presumptive 2016 nominee. Where does the GOP go from here? 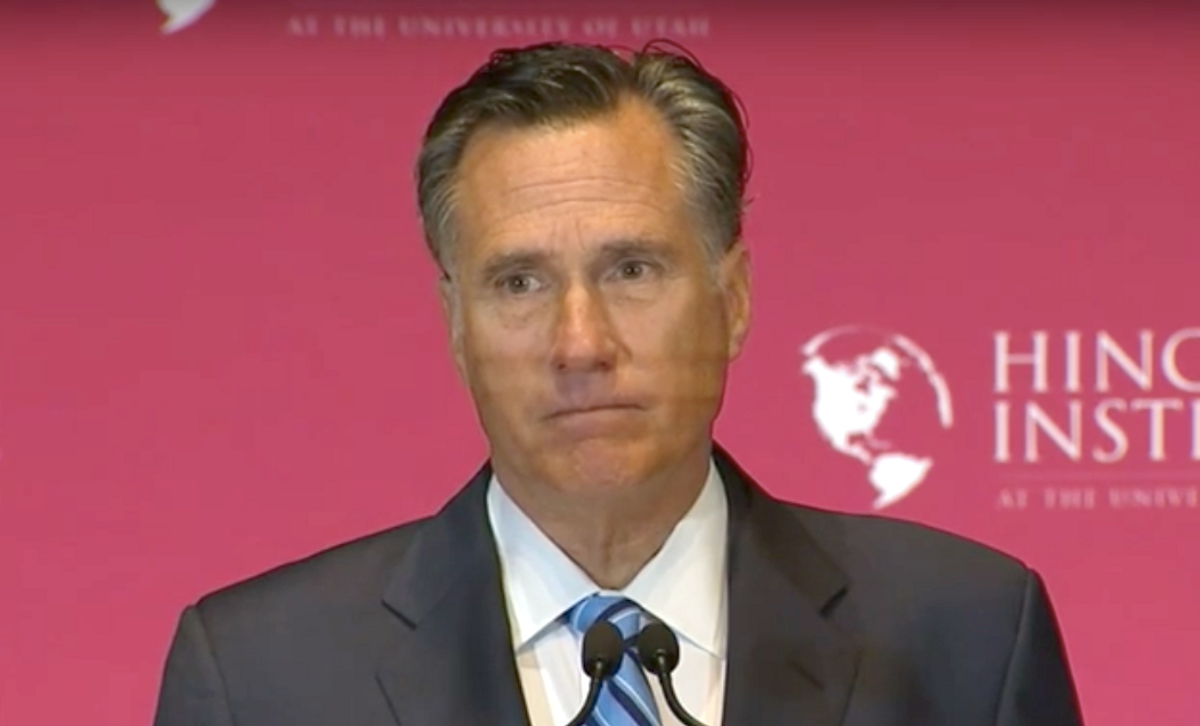 Imagine this for a moment. Imagine if Bernie Sanders was the uncontested Democratic frontrunner. Now imagine if John Kerry, the last Democratic candidate for president to come up short on election day, delivered a major televised address in which he mercilessly vivisected Bernie's perceived lack of qualifications, referring to the Vermont senator as "a phony, a fraud." Next, imagine the proverbial nuclear detonation that Kerry's remarks would’ve launched within the party -- followed closely by cable news pronouncements of "the Democrats in disarray." Imagine what Bernie's loyalists would do to Kerry and the broader party establishment. Imagine the size of the proverbial mushroom cloud and the radioactive decay in the aftermath.

This is what Mitt Romney has done regarding Donald Trump today.

Of course I hasten to underline that there are vast chasmic differences between Bernie and Trump, differences too numerous to list. But on a political level, it would absolutely signify a major event, portending what could be the first major 21st century shift in the makeup of our two-party system.

There's literally no predicting what happens next following Romney's Thursday address on Trump. The former Massachusetts governor nailed Trump on every weakness and every flaw in the frontrunner's long list of wacky, cartoonish drawbacks. Some highlights from Romney's speech:

"His promises are as worthless as a degree from Trump University."

"His is not the temperament of a stable, thoughtful leader. His imagination must not be married to real power."

"If Donald Trump’s plans were ever implemented, the country would sink into a prolonged recession."

"And what ever happened to Trump Airlines? How about Trump University? And then there’s Trump Magazine and Trump Vodka and Trump Steaks, and Trump Mortgage? A business genius he is not."

"There is dark irony in his boasts of his sexual exploits during the Vietnam War while John McCain, whom he has mocked, was imprisoned and tortured."

"Now imagine your children and your grandchildren acting the way he does. Will you welcome that? Haven’t we seen before what happens when people in prominent positions fail the basic responsibility of honorable conduct? We have, and it always injures our families and our country."

Rommey's most revealing and salient line described the status of the GOP presidential campaign: "But the rules of political history have pretty much all been shredded during this campaign."

The truth is obvious to those of us who've been charting the disintegration of the GOP. The Republican Party has been slowly shredding the rules of discourse for the better part of 20 years now, beginning with the impeachment of Bill Clinton, then with the ascendancy of an intellectually lazy George W. Bush backed by the marketing and monetization of far-right ideology by the conservative entertainment complex, followed by the nomination of Sarah Palin for vice president and joined by the inchoate, rage-filled carpet bombing of the Obama presidency and, now, the undeniable frontrunner status of, to quote Graydon Carter, a short-fingered vulgarian named Donald Trump.

Nowhere in Romney's speech nor within the lamentations of other party fathers has there been a hint of personal responsibility for what the GOP has done to itself and to the discourse in order to arrive at this terrifying crossroads in American political history. Remember, Romney stood on the shoulders of Trump's endorsement in 2012. Romney engaged in Southern Strategy dog-whistle campaigning last time as well, suggesting that "Obama isn't working," and that his ideas were "foreign." But today, Romney seems like a stable voice of reason in a GOP ocean of nincompoopery and incompetence. But to Trump and his supporters, he's nothing but a loser and a feckless bad cop sent from Reince Priebus' war room.

The engine of popular rage fomented by Palin in 2008, exploited by Romney in 2012 and repeated around the clock on Fox News and AM talk radio, has propelled most GOP voters into the frigid, knowing embrace of Donald Trump today -- not in protest of the GOP's recent history of political demagoguery, but because of it. The rise of Trump isn't a backlash to Republican establishment politics; it's the natural extension of it. Even the filibuster-happy theatrics of Trump's presidential opponents, specifically Ted Cruz and Rand Paul, helped provide Republican voters a syllabus of reasons to enlist in Trump's army of brainwashed middle-aged white people.

The modern GOP has been focused almost exclusively on bumper-sticker sloganeering, rather than policy wonkery, for at least two decades, and Trump is merely squatting atop this rickety house of cards, built on specious nonsense rather than policy heft. Trump is leaning on the gas pedal and running the GOP style of politics through its paces. He's cynically pushing the limits of what the machine can handle, but make no mistake, the machine was there long before Trump arrived. There are millions of Republicans who've been whipped into anti-Obama frenzies, and are therefore millions of (white) Americans willing to support anything that will wrest the nation back from the clutches of the black president. Trump is the antidote. He's become the Mussolini of the GOP's Bubble Empire, and the party establishment made it all possible.

So far, 3,365,867 voters have cast ballots for Trump, with millions more still to come. For eight years, these voters have been told that no matter what happens, they must help destroy the Obama legacy by any means possible. It's practically a biblical calling to them. And now Mitt Romney and the GOP establishment are telling them they've made the wrong choice. They've chosen a false god. But now, months into it, they're emotionally and faithfully invested. Trump speaks to them, they say. He's just like them, they say. But the party knows that Trump must not become the nominee. He's not the true orange messiah of these three million voters, delivered from on high to "make America great again." Instead, he's the Great Satan who will destroy the party.

And now, the party that made it possible for Messiah Trump to walk the earth among us mere mortals appears to be inaugurating a process to strip this bewigged savior away from the people. If this is what the party is planning -- if the party is conspiring to elevate another candidate at the convention or to somehow force Trump out of the race, spitting in the face of the people's electoral will, tens of millions of GOP voters will surely follow their messiah out the door. The GOP has painted itself into a very serious corner. Replace Trump and it's screwed. Allow Trump to be nominee and it's screwed.

For too many years, the GOP "shredded" its own rules for the sake of political expedience, just as the George W. Bush administration undermined its own legacy by foolishly and cynically invading Iraq in order to achieve a second term. The GOP has routinely traded long term devastation for short term results.

It's difficult to fully emphasize how utterly devastating the next several months will be for the Republican Party. But, to paraphrase Romney himself from 2012, the GOP built this. And it's nothing short of political suicide.