Relic hunter: A missing Christian relic, the fall of Nazi Germany and a mystery that flummoxed historians for centuries

There are 3 different "holy" lances said to have pierced Christ's side—but are any of them for real? 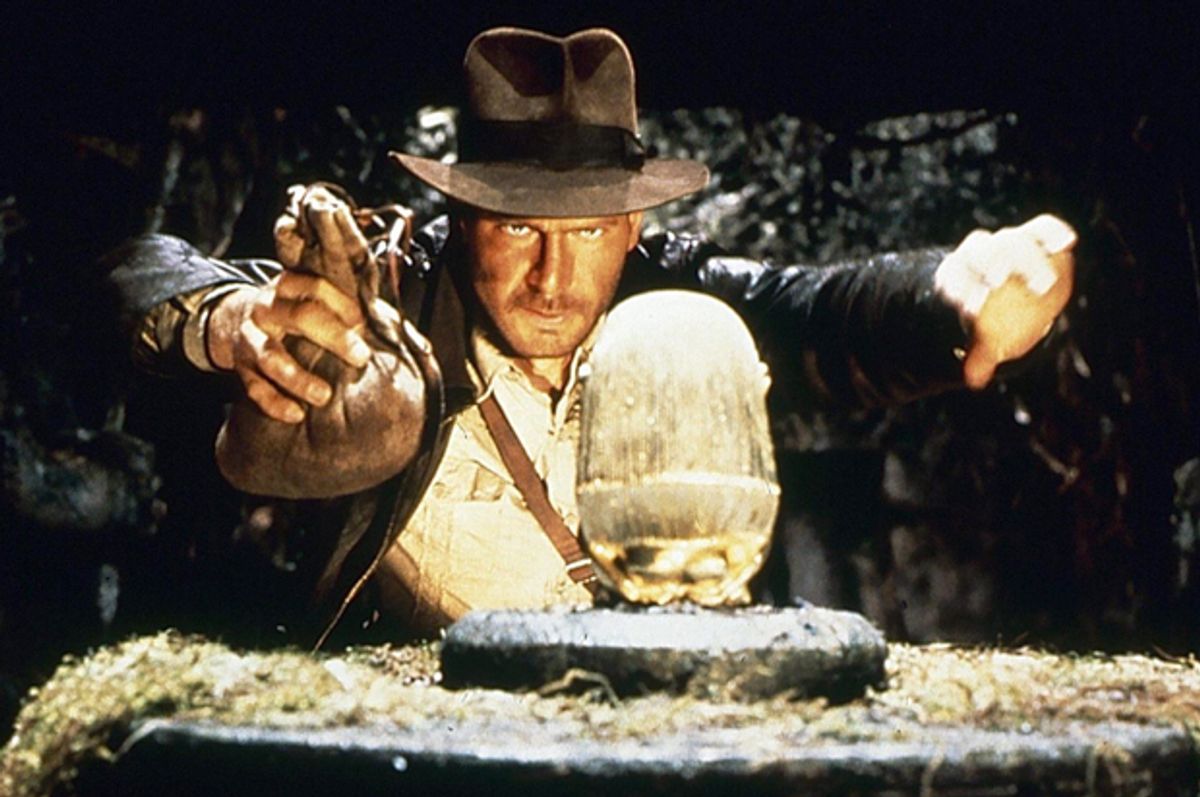 Harrison Ford in "Raiders of the Lost Ark" (Lucasfilm)
--

As locked-room mysteries go, this one was a doozy. A famous Christian relic disappeared from a locked vault beneath the bomb-blasted streets of Nuremberg, just as the Second World War was ending and the famous trials of the Nazi elite were set to begin. The Holy Lance, or Spear of Destiny, was the iron pilum used by the Roman legionnaire Longinus to pierce Christ’s side as he hung on the cross, to see if he had died. According to the Gospel of John (19:34) and apocryphal sources, “water and blood” flowed from Christ’s wound and into Longinus’ eyes, and he was immediately converted. Through history, four different spearheads have been claimed as the original (two of which are actually pieces from the same head). This most famous candidate had been part of Charlemagne’s treasury, and had ended up in the collection of the Belvedere Palace in Vienna.

When Hitler annexed Austria, he had the Holy Lance and other treasures that were part of the Reichskleinodien, the Crown Jewels of the Holy Roman Emperors, brought to Nuremberg. Hitler and Himmler were fascinated with the occult, and saw Nuremberg as the spiritual center of the Nazi Party—Hitler planned to have himself crowned there as a latter-day Holy Roman Emperor at the war’s end. When the Allies stormed Nuremberg, a German-born Monuments Man, Walter Horn, was called in to locate the Crown Jewels—which had gone missing from the locked subterranean vault in which they were kept, and for which only three people had the key. It was a hunt for stolen treasure, but a treasure with an enormous symbolic significance for Nazis and Christians alike. If, that is, it was authentic.

A cult fascination with religious relics and their supposed supernatural properties began shortly after the establishment of Christianity. The purported tomb of Saint Peter, located in an ancient Roman necropolis hidden directly beneath the high altar of Saint Peter’s Basilica in Rome, was initially found to be empty, and the Vatican archaeologist, Monsignor Ludwig Kaas, who found it in 1939, feared that he had arrived too late—that early Christian relic hunters had stripped away Peter’s bones for their sacred value and the supposed power of the remnants of saints to work miracles and heal the sick. But investigation led to an astonishing discovery: the tomb had been built expressly to trick relic hunters. The bones were actually entombed in a hollow in one of the four walls of the tomb, not in the cavity of the tomb itself. This demonstrates an awareness that the bones of saints would be sought, traded and sometimes stolen by the faithful, even within a few years of Christianity’s foundation.

Throughout the Middle Ages, a lively trade in relics flourished, including numerous fakes. With thousands of soldiers streaming home from the Holy Land after the Crusades, it was not hard to believe that a fragment of bone might indeed have come from some saint, whether or not it did. Famous relics, or objects claimed as authentic relics, made their way from Palestine through Europe, from the Crown of Thorns (currently enshrined at Notre Dame de Paris) to the Shroud of Turin (a suspected forgery as early as the 13th century, and proven as such by scientific testing in the 1980s). Which of these objects, if any, were real relics, actually involved in the life of Christ?

There are currently three lance-heads that are claimed by their owners to be the original Holy Lance of Longinus. Which, if any, is the real one?

The Echmiadzin Lance is currently displayed in Armenia. It was discovered during the First Crusade in 1098 by a soldier called Peter Bartholomew, after he had a vision of Saint Andrew telling him the location of the lance, in the cathedral of Saint Peter in Antioch. This lance is oddly diamond-shaped and flat, rather than sharply pointed, and has a conical iron base that would fit at the end of a pole—most scholars think it looks more like the fitment that would stand atop a Roman standard, and would not make for a serviceable weapon. There is no reason to doubt that it was found by crusaders in Antioch, but similarly there is no reason to associate this with Longinus, beyond wishful thinking on the part of those who discovered it.

The Vatican Lance is said to rest in a reliquary beneath a sculpture of Longinus by Bernini, in a niche beneath the dome of Saint Peter’s (though it is not visible to the public). This lance was first recorded by Antoninus of Piacenza (570 AD), who wrote that he saw “the crown of thorns with which Our Lord was crowned and the lance with which He was struck in the side” at the Basilica of Mount Zion in Jerusalem. Numerous other early Christian writers likewise described having seen it. In 615 a Persian king, Chosroes II, took it from Jerusalem and is said to have broken off the tip to give as a gift, which ended up in Hagia Sophia in Constantinople—it was eventually sold by King Baldwin II to King Louis IX of France, along with the Crown of Thorns, and was displayed in Sainte-Chapelle, until it disappeared during the French Revolution.

The Nuremberg or Vienna Lance, which the Nazis venerated as the original, is now on display at the Belvedere Palace in Vienna. It has a long, documented history, as it was part of Charlemagne’s Crown Jewels, guarded as sacred by Holy Roman emperors for centuries. It had been kept in Nuremberg for a millennium, before being moved to Vienna to keep it out of the hands of Napoleon’s thieving troops. Hitler brought it back and locked it away in a vault, from which it was stolen. Walter Horn eventually found it, along with the other the Crown Jewels, and they were returned to Austria (the story is grippingly told in Sidney Kirkpatrick’s book "Hitler’s Holy Relics").

Will the real Holy Lance-head please stand up?

The best way to determine which might be the real one is by scientific testing, but it is rare for permission to be given for the forensic testing of relics. Faith may be defined as blind belief, without the need for tangible “proof,” and most would say that religious relics are for the faithful, not for the scientists. In the unusual instances when an object has undergone tests, as in the case of the Shroud of Turin, it has not come out well for the object. In that case, four independent scientific laboratories all determined that the Shroud was actually a painting made the 13th century, a forgery meant to be passed off as an ancient relic. The Vatican has never tested the bones that they believe to be those of Saint Peter, beyond determining that they came from a man of around 60 years of age, with a muscular build. Testing can rarely definitively prove what something is; more often it rules out possibilities. Carbon-14 testing can give the age of an object, so the bones could indeed date to the first century AD, but that does not prove that they are Saint Peter’s—merely that they could be. And if they date to a later period, then the precious relic has been deposed, and faith in it shattered.

It was a surprise, then, that the Vienna Holy Lance was subjected to scientific testing, which demonstrated that it could be authentic—at least part of it.

In 2003, metallurgist Robert Feather was given special permission to examine the lance for a BBC special. He determined that the iron of the lance-head itself was from the 7th century AD, but that inside the Lance he found a 1st century Roman nail, which tradition holds was one of the nails used in the crucifixion, and is itself a venerated relic, the Holy Nail. As part of this lance’s intricate history, it is thought to have been displayed in the cathedral of Lombard Milan in the 7th century, at which point the Holy Nail was inserted into the lance-head, to create a sort of double-strength relic, nail and lance. That insertion would have required some recasting, which could explain the 7th-century dating of the iron. In short, this version of the Holy Lance could be the original, and could actually incorporate a different relic of the Passion. But, in the end, it is up to the faithful to decide.