Mitt Romney has a plan to stop Donald Trump — a silly, nonsensical and thoroughly unrealistic plan 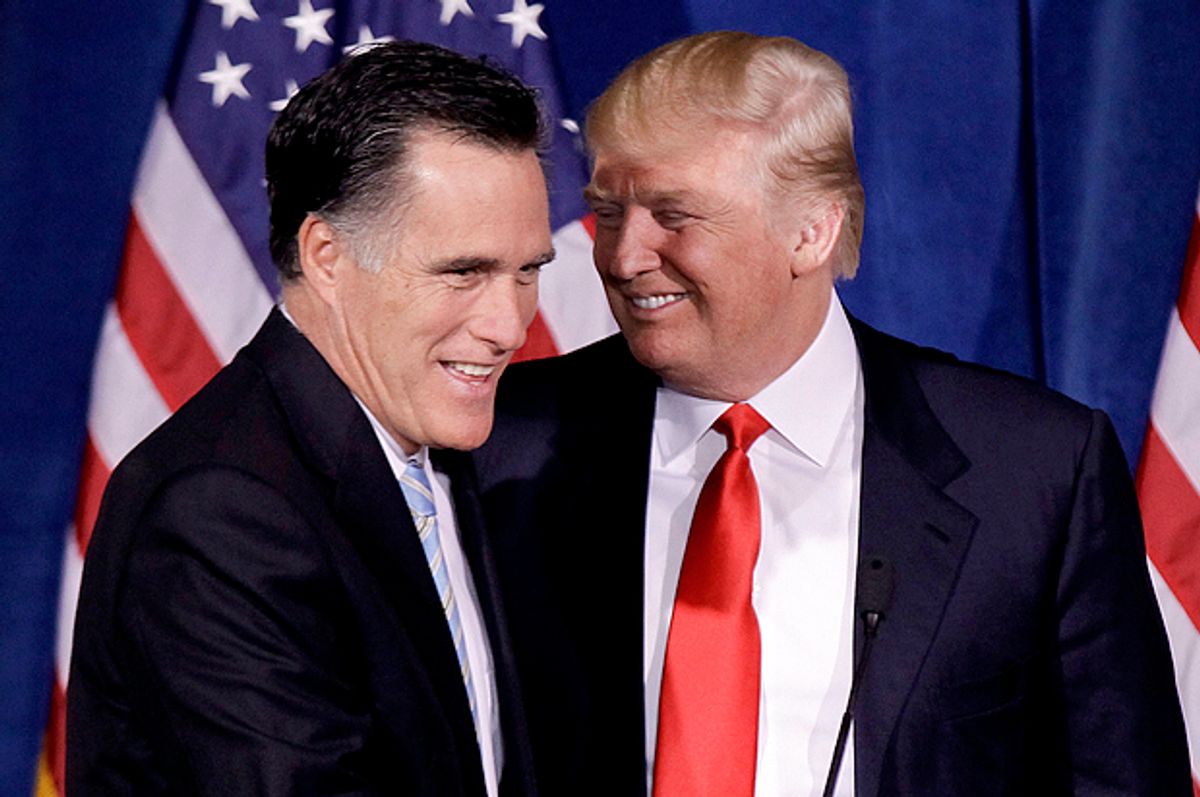 Mitt Romney gave his big speech on Thursday about the 2016 presidential race and I think it’s important to take a large step backward so that we can get a fuller picture of just how thoroughly chaotic the Republican Party is right now. The GOP’s most recent presidential nominee served up a scathing indictment of the candidate currently leading the Republican field, calling him a fraud, a bigot and a failure in business who will destroy the country. But rather than endorse an alternative candidate or make an appeal to reason, this party elder offered up a cockamamie scheme to convince Republicans to strategically abandon their own candidates and instead use their votes as defensive weapons aimed at denying the toxic front-runner an easy path to the nomination.

The Republican Party is officially at war with itself. And one side – the side represented on Thursday by Mitt Romney – is desperate.

Here’s what Romney had to say to voters in the upcoming Republican primaries:

The rules of political history have pretty much all been shredded during this campaign. If the other candidates can find common ground, I believe we can nominate a person who can win the general election and who will represent the values and policies of conservatism. Given the current delegate selection process, this means that I would vote for Marco Rubio in Florida, for John Kasich in Ohio, and for Ted Cruz or whichever one of the other two contenders has the best chance of beating Mr. Trump in a given state.

When I wrote my preview of Romney’s speech, I argued that by inserting himself into the 2016 process like this, he would implicitly make the non-Trump candidates look weak. But Romney didn’t even bother with implication – he just said outright that none of them are up to the task of taking down Trump and at this point they shouldn’t even be treated as real candidates. Instead Romney treats them as nothing more than collection pools for anti-Trump votes. And for the Romney strategic voting scheme to work, he has to assume that these non-Trump candidates will obviously have no objection to a failed presidential candidate urging their supporters to abandon them and vote for their rivals. Per the Romney logic, none of them can actually win on their own, so why not do a little voter lend-lease on a state-to-state basis?

That gets to another problem with this absurd plan. Romney is preaching “common ground” in the face of the Trump threat, which is the complete antithesis of what the three remaining candidates are trying to achieve. Ted Cruz is pressuring Marco Rubio to get out of the race, suggesting that he’s likely to lose his home state of Florida to Trump. Rubio, meanwhile, continues to believe he is the stronger candidate (even as his campaign shrinks to a Florida-centric last stand) and is busily arguing that the other candidates should drop out so he can start winning. John Kasich is … well, no one really knows what John Kasich is doing, but it involves winning Ohio and then somehow holding on until the convention. Each candidate wants his supporters to believe not just that he's the only ones who can stop Trump, but that the other guys are hopeless losers. They each want the one-on-one fight with Trump. But Romney’s preaching some sort of weird detente in which they all stay in the race and all win states so that Donald Trump doesn’t get enough delegates to win outright.

The necessary outcome of the Romney strategy, therefore, is a brokered convention in which a deal is made to shift the requisite number of delegates to one of the non-Trumps. This would be a disaster for the party. If Trump comes into that scenario with the plurality of votes and the plurality of delegates, but still has the nomination snatched from him by the scheming of the Republican establishment, there will be bedlam. The candidate who emerges as the nominee will be tainted by questions of legitimacy, and they’ll still have to deal with Trump, who is already threatening to instruct his followers to stay home if he’s denied the nomination. “If I go, I will tell you, these millions of people that joined, they’re all coming with me,” Trump said Thursday morning.

But this is Romney’s big plan. That’s all he’s got. After letting Trump go unchallenged for months and then win the vast majority of early-state primaries, the self-appointed voice of the Republican establishment can’t think of anything to do but call for voters to strategically abandon their candidates in service of the common good. And the best reward they can hope for is a messy convention fight that will still divide the party. Romney’s speech and the ideas laid out therein should be viewed as what they are: the desperate acts of people who don’t know what else to do.